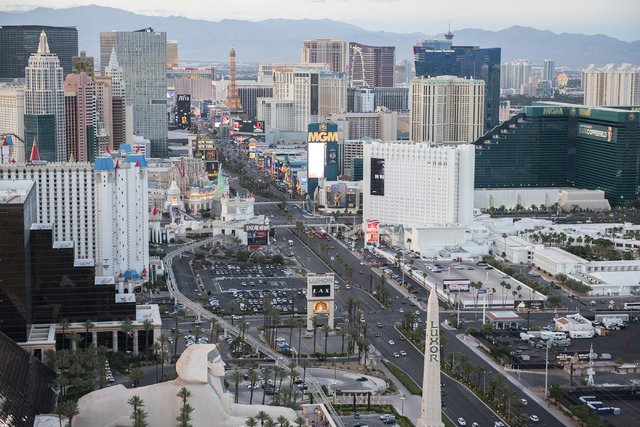 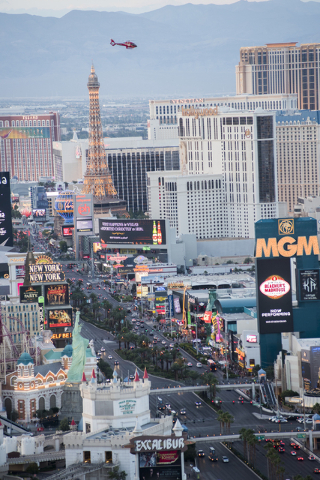 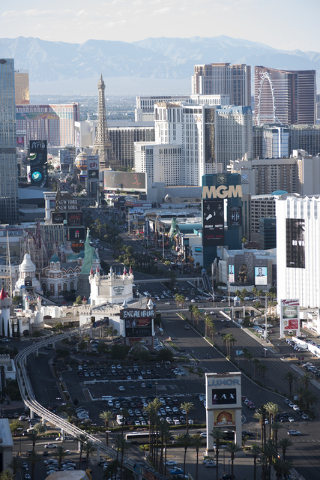 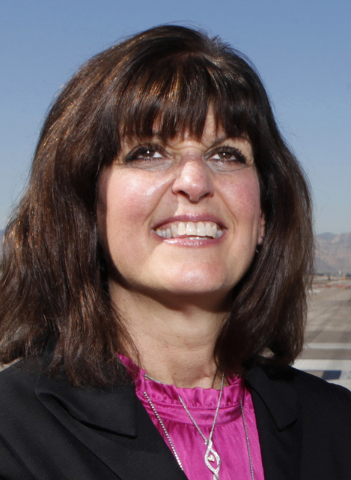 Clark County Director Of Aviation Rosemary Vassiliadis poses for a portrait on the east west runway at McCarran International Airport in Las Vegas Wednesday, Oct. 29, 2014. The east west runway at the airport begun the first phase of a $67 million renovation project to replace the asphalt on their longest runway with concrete. (Erik Verduzco/Las Vegas Review-Journal)

That idea to drill a double-deck tunnel under McCarran International Airport to carry cars, trucks and possibly a light-rail train to the Las Vegas Strip won’t be a slam-dunk.

For that matter, neither will the proposal to build a subway under the Strip between Sahara and Hacienda avenues.

Or extending the Las Vegas Monorail to Mandalay Bay and a high-speed rail station across Interstate 15 from that resort.

But the Regional Transportation Commission of Southern Nevada’s “go-big-or-go-home” Wednesday unveiling of a series of economic development-based transportation solutions that’s been called the Transportation Investment Business Plan accomplished at least one of its goals already — it got people talking about what could be in store if tourism corridor gridlock problems aren’t addressed.

“I have to admit, it took me a little while to breathe when I first heard about it,” Clark County Aviation Director Rosemary Vassiliadis said of the proposal to link Russell Road east and west of the airport with an underground route.

“When (Las Vegas Convention and Visitors Authority President and CEO) Rossi (Ralenkotter) asked us to look at different proposals, he asked us to open ourselves to every idea,” she said. “Something has to happen. If the tourism corridor is in gridlock, it’s going to impact us all.”

Vassiliadis said she likes the idea of broadening access to the airport with a Russell Road tunnel but there are issues with the proposal that go beyond cost.

Because of new security measures approved after the 9/11 terrorist attacks, the Federal Aviation Administration and Transportation Security Administration would have to sign off on a tunnel and it’s possible they wouldn’t be excited about building anything under the airport terminal, tarmacs or runways.

An airport multimodal transportation center is prominently mentioned in the plan and would interface with public transit and private transportation services. The station would be on property owned by Clark County between Paradise Road and Swenson Street south of Tropicana Avenue.

Vassiliadis has toured the PHX Sky Train facility at Sky Harbor International Airport in Phoenix and likes the concept of an automated electric people-mover system that circulates between the city’s light-rail system stop, parking areas and terminals and eventually serves the airport’s off-site rental car facility.

Not only does the Sky Train reduce air pollution but it minimizes curb congestion, an appealing benefit for McCarran which occasionally endures long cab lines and blocked lanes at passenger drop-off and pickup points. In addition, it won’t be long before transportation network companies such as Uber are knocking on Vassiliadis’ door to figure out where their drivers can drop off and pick up customers.

“They’re the new wild card for us because they were only recently approved for operation by the Legislature,” she said. “But that isn’t the only wild card. We’re still waiting to find out what’s going to happen with a UNLV football stadium, which would definitely affect us, and we still don’t know how the new MGM arena is going to affect us. That’s why new access on Russell is important.”

The other “wow” project on the plan list is the proposal to build an underground light-rail system beneath the Strip.

Critics were quick to jump on the massive expense of such a system.

Tina Quigley, general manager of the Regional Transportation Commission, who unveiled the plan Wednesday, acknowledged that such a system would cost billions of dollars to build. It would be even more expensive because it would require tunnel boring, not a cut-and-fill construction method since Strip resorts could not bear the time or expense of street closures that would occur if there were long periods of open construction pits along the length of the boulevard.

“We’ve already heard some of the criticism,” Quigley said in a Wednesday meeting of some of the key stakeholders participating in the plan’s drafting. “The big question is: This is great, but how are you going to pay for it?”

That’s the next phase of the planning process. Greg Gilbert, outside general counsel for the Regional Transportation Commission, will compile a detailed summary of project proposals and list prospective funding sources for the projects over the next three months.

“The real question is do we as a community want to do things necessary to plan responsibly for these potential alternatives?” Gilbert said. “In order to do something this significant from an infrastructure perspective, we’d be required to engage in any number of different environmental permitting exercises that would take quite a lot of time. It’s going to take five years on our best day to get through an environmental process where we’re even at a point where we can say who’s going to pay for this now.”

At that point, the committee would explore the different possibilities, from local and state sources and the federal government as well as the private sector.

The initial challenge was for every stakeholder to be on the same page.

“One thing we were determined to make sure of was that this was a community consensus blueprint,” Quigley said. “It couldn’t just be the RTC’s study or the county’s study. It had to be community stakeholders’ recommendations.”

The group tried to find another city that experienced the same problems and duplicate its successful efforts.

“One of the things we tried to do early on was find a mentor city that we could look to to see how they addressed something similar,” Quigley said. “What we found out is there is not a single city in the world in terms of the number of people they are moving between very concentrated destinations. We’re on our own at this point.”

One of the unique qualities of Las Vegas is that the people using the core tourism corridor — the biggest users of transportation systems — turn over every three days when they visit and leave. That led to some less expensive proposals to better educate visitors of their travel options.

Economist Jeremy Aguero of Las Vegas-based Applied Analysis made sure the committee’s analysis was data-driven and incorporated an element of return on investment.

“The thing is, these people aren’t just coming to Caesars Palace, plopping down and not going anywhere anymore,” Aguero said. “They’re moving around, going to different places, which is what Las Vegas has become. In a place like Disneyland, they arrive at the park and use the company’s transportation infrastructure, but mostly on the property.”

The one thing all the stakeholders agreed on was that regardless of their prior experiences in Las Vegas, visitors always know how to call a cab to get from one place to another, which is why the Nevada Taxicab Authority and Bell Transportation executive Brent Bell were at the table.

Ileana Drobkin, who heads the Taxicab Authority, said the industry’s leaders wanted to participate because they know that failure means convention and meeting planners will take their events elsewhere.

“If we don’t solve this, Orlando is going to try to pick off some of our conventions because that’s what they’re already trying to do,” Drobkin said.

Indeed, Orlando officials are preparing to break ground on a transportation system from Orlando International Airport to the Orange County Convention Center.

A $400 million magnetic levitation system that would link the airport east to the convention center and International Drive, the home of several hotels surrounding the center, and will get conventioneers to their trade shows and hotel rooms as quickly as they’re able to do it now in Las Vegas.

“If we don’t start the conversation today,” said Cathy Tull, senior vice president of marketing for the Las Vegas Convention and Visitors Authority, “five years from now we’re not going to be in any better place and maybe even further behind the eight ball.”