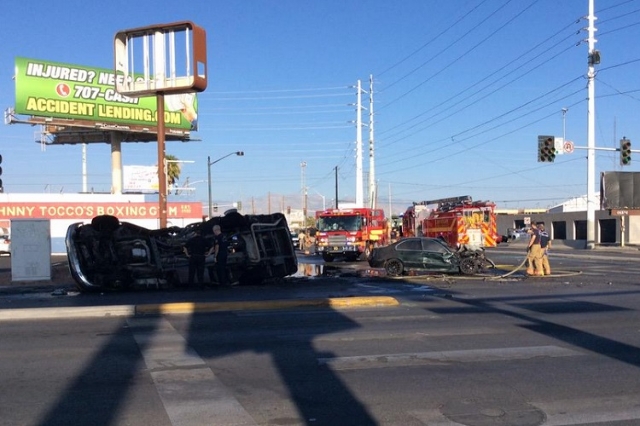 Las Vegas Justice of the Peace Karen Bennett-Haron postponed a court hearing for Donner until next week, as he remains at the University Medical Center. His condition was not available Monday morning.

Police said Donner’s 1998 BMW 540i sped through a red light at the intersection of Charleston Boulevard and South Main Street at about 7 a.m. the morning of the crash. The car slammed into the driver’s side of a Grand Canyon tour bus, which rolled, and both vehicles caught fire, police said.

Three passengers escaped the bus and were taken to UMC with serious injuries.

Police said Jonathan Donner was westbound in the BMW on Charleston when he hit the tour bus then the front of a 2010 Ford F-150 that was stopped. The driver of the Ford, a 32-year-old man, was unhurt.

Donner’s girlfriend told police he was drunk when he went to her apartment, less than two miles from the crash, that morning. She said she took Donner’s keys, but the two fought and he took them back.

She called police at 6:55 a.m. to report that Donner had left her apartment, headed west on Charleston, an arrest report said.

Authorities said Donner was confrontational when Metro officers met him at UMC, saying he doesn’t talk to police. He told an officer to “f— off” when police asked if he would volunteer his blood to be tested for alcohol.