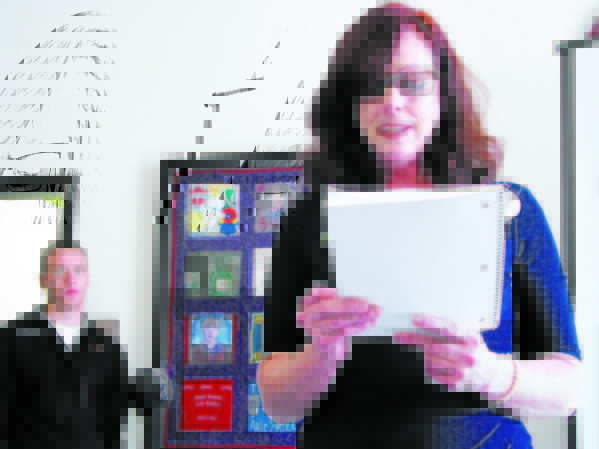 Aric Brill‘s brother, Kevin, looks on as their mother, Karen Brill-Kelley, speaks during a Feb. 21, 2014, ceremony to remember Aric at the University Medical Center Center for Transplantation. Aric Brill was 16 when he was murdered in 2009. His donated organs helped save the lives of six people, and Brill-Kelley calls police each year in late January. clinging to hope that her son‘s killer will be brought to justice. F. Andrew Taylor/Review-Journ

Almost seven years have gone by since her 16-year-old son, Aric Brill, was shot in the back of the head at a North Las Vegas house party.

The shooter was never identified.

“They have no leads,” the North Las Vegas resident said Wednesday of Metro’s ongoing investigation.

Still, the grieving mother checks in with the department at least annually, clinging to hope for new information.

“They don’t call me, I call them,” she said of her persistence.

That persistence led her and her husband to the decision to sell their family home to offer a $100,000 reward to anyone who can lead officials to a conviction of the person who shot her once college-bound, ambitious teenager.

On Feb. 20, 2009, Brill and another young man, Joseph Bentley, were attacked at a house party on Beesley Drive, near Charleston and Nellis boulevards. Witnesses told police at the time that a male approached the victims, pulled out two handguns and shot them.

“It was dark, kids scattered,” Brill-Kelley said. More than 80 people were in the front yard of the house when the shooting occurred.

Police told Brill-Kelley that the shooting was a random act of violence motivated by a robbery and is gang-related.

Bentley survived his gunshot wound and remains close to his late friend’s mother. “He’s like a son to me,” she said.

Homicide detectives are looking for five assailants, but, “only one of them actually shot the gun,” Brill-Kelley said — that’s who she is interested in.

The mother said she plans to help the other four people avoid charges, if it means bringing her son’s killer to justice.

“Somebody there saw them. We need that person to come forward,” she pleaded.

“We will not list it until somebody comes forward and gets convicted.”

New efforts to find the killer are “being put on by the family,” and are not directly related to the investigation, Hadfield said.

“This is a family that’s hurting. They want closure to their case.”

“I will do that till my last breath,” she said.

In 2011, Brill was honored by Donate Life America, a nonprofit organization that encourages organ donations, for saving six lives with his harvested organs.