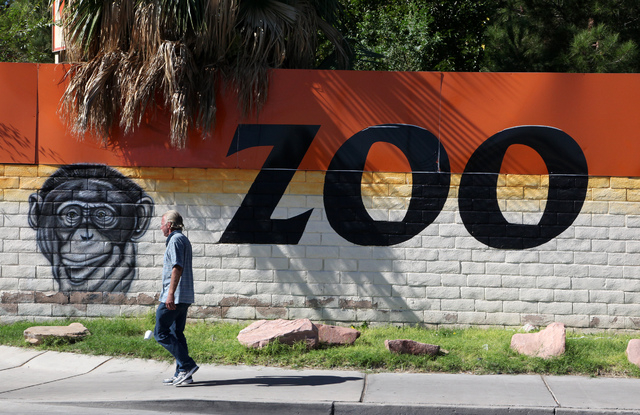 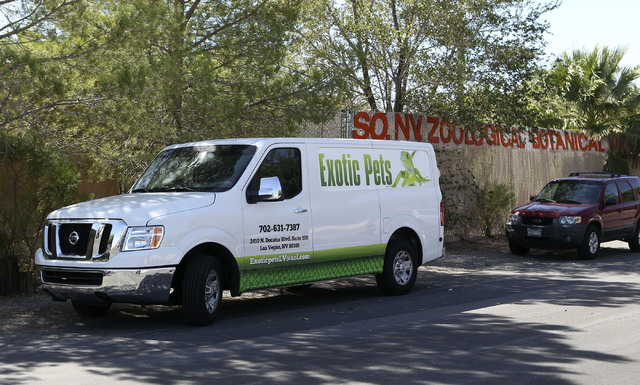 A truck from Exotic Pets is parked in front of the Las Vegas Zoo, Wednesday, Sept. 25, 2013. (Jerry Henkel/Las Vegas Review-Journal)

Federal officials began removing animals from the Southern Nevada Zoological Park this week, but a sign on the front gate says the facility is closed to the public for upgrades.

In its 30 years of operation, the Las Vegas zoo on Rancho Drive has been cited by government agencies, sued, come under fire from employees and had several animals die. Recently, the Occupational Safety and Health Administration and U.S. Department of Agriculture cited and fined the facility.

The latest inspection from the USDA, in July 2010, revealed insufficient shade for several of the animals. The report stated that goats in the petting zoo were hiding under a small amount of shade as temperatures reached 104 degrees.

Tanya Espinosa, a spokeswoman with USDA, said Dingle is working with the agency to move the animals.

The renowned San Diego Zoo loaned several of its animals to Dingle’s facility for decades, but no animals had been kept on loan there since 2011.

The Las Vegas zoo was working toward a higher “standard of care” that could have led to it becoming a nationally accredited zoo, but it was not able to continue the effort, said San Diego Zoo spokeswoman Christina Simmons.

“San Diego Zoo Global has worked on and off with them over the years,” Simmons said. “Most recently we had staff go over and help to design and construct enclosures and suggest other improvements.”

Dingle opened the zoo in 1981 after spending several years with the North Las Vegas Police Department.

Dingle rose to become a detective in North Las Vegas, and he raised birds in his yard as a hobby.

By 1979, his hobby had become a business. He opened For the Birds, an exotic bird shop. It did so well that he decided to retire from the force and concentrate on the business.

Eventually, Dingle started a petting zoo at the bird shop. It became so popular, he said, that he used a $25,000 Small Business Administration loan to start a zoo.

The zoo, though small, led to dreams of a much larger operation. In the early days, Dingle planned to use 200-plus acres he had leased near Floyd Lamb State Park to eventually open a zoo he dreamed would be two and a half times as large as the San Diego Zoo.

But the tiny zoo he did open on Rancho Drive never took off as he had hoped, and by the late 1980s, problems began to crop up.

In 1987, a leopard escaped. Police had to shoot it before it killed someone.

In 1989, a slew of former employees began lodging complaints against the zoo with the authorities. They said the conditions were not fit for animals, the snack bar was unsanitary and Dingle did not listen to sound medical advice from his veterinarians.

That summer, during a free admission promotion on a Saturday, there were so many visitors that the zoo sold 10 times the normal amount of feed it would sell on a Saturday. The visitors fed the sheep and goats so much, authorities concluded, that three of them died from overeating.

Federal authorities investigated the complaints and cited the zoo, forcing Dingle to improve animal habitats. He eventually made the necessary repairs. The local authorities shut down the zoo’s snack bar and refused to grant a permit to allow it to reopen.

Also in 1989, the city of Las Vegas loaned the zoo more than $150,000 in federal Housing and Urban Development money intended for low- and middle-income families on the theory that it would create jobs at the zoo.

Dingle used the money to pay himself and his wife, buy a parking lot, and make federally mandated changes and some other improvements, including to the snack bar.

The loan never created jobs, and the city sued to force Dingle to repay it.

He and his wife eventually agreed to hand over their interest in a lease of 240 acres near Floyd Lamb State Park in exchange for the city’s forgiveness of the loan.

In 1993, an ape died at the zoo, bringing another round of criticism from the public and some former employees.

The authorities investigated, fined the zoo and forced it to close for a week while experts monitored the operation.

Four years ago, a lion at the zoo died after eating a rubber ball.

It later turned out that the lion had died of cancer.