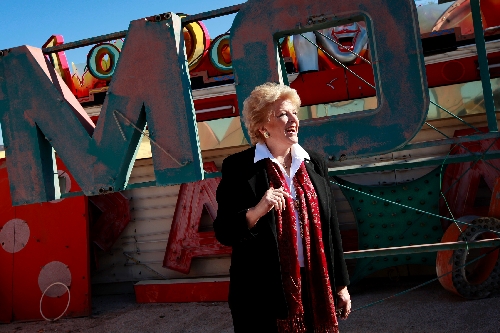 A little piece of historic Las Vegas will flicker back to life this summer, if progress on the Neon Museum continues apace.

On Monday, officials at the downtown museum said they expect to complete construction on a new visitors center in six months and open it to the public 30 days later.

The museum, located at 770 Las Vegas Blvd. North, is an upgrade of the site of the Neon Boneyard, a resting place for defunct neon signs mostly salvaged from old casinos.

The preservation organization, founded in 1996, cares for the site, which is a popular place for tours and photo and film shoots.

With the opening of the museum, the centerpiece of which is the remodeled shell of the La Concha motel recycled into a visitors center, downtown boosters hope to broaden interest in the signs beyond filmmakers and photographers.

“When they hear about the Boneyard and the Neon Museum, it is going to be a real draw,” Goodman said. “New Orleans has Bourbon Street and their jazz, and Las Vegas has the neon.”

Goodman also sounded hopeful that raising the profile of the museum would result in more people seeking to film there. As Goodman has stated, one of her goals is to attract more film projects to Las Vegas, but so far she hasn’t announced any.

Neon Museum board Chairman Bill Marion said the entire museum project, including a small city park adjacent to the visitors center site, cost about $6 million and was paid for with public and private sources.

The sources include the Las Vegas Centennial Commission, which gets money from sales of specialized license plates; the Southern Nevada Public Lands Management Act, which raises funds through Bureau of Land Management sales of public land; the National Scenic Byways Program; the Las Vegas Convention and Visitors Authority, which gets money through hotel room taxes; the State Office of Historic Preservation and private donations.