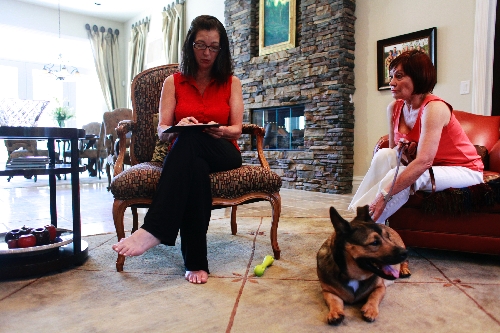 A floppy, oversized tongue sprung from Bruno’s mouth as the shepherd-basset mix strutted on squatty legs over to his foster mom.

But the 5-year-old pup’s "everything’s cool, dude" attitude is just a front — at least according to Joan Ranquet, a pet psychic of sorts.

"He’s really upset and has been for a while," said Ranquet of the dog she has been told is a rescue.

Although skeptics might call her "perception" common sense, she said her clients are amazed by the details their pets tell her.

The animal communicator, whose second book on the topic will be published next summer, is sharing her skills with the Las Vegas public this weekend. The Seattle woman is in town for a Las Vegas Valley Humane Society fundraiser, which included a speech and reception Friday evening and public pet readings today .

The society, a nonprofit organization, places animals with foster families until they can be adopted.

In her brief interaction with Bruno, Ranquet said he told her he misses a man from the family who was forced to move away and leave him behind.

Jen Hlavacek, dog coordinator at the society, shook her head in agreement as she revealed that the dog’s previous owner had three adult sons who raised the animal.

Fifty-fifty chance? Ranquet calls it a skill in communication.

To the nonbeliever, there isn’t much communication involved, though: Ranquet closes her eyes, quickly scrawling on a notecard whatever comes to her.

She said her senses aren’t talent but a skill that pet owners unknowingly practice every day. "You know when you walk into a room and a dog is sad. That’s telepathy. I just got really good at it."

In her communications with at least a dozen species, she has learned dolphins think humans should stick together more, a dog told her the family’s daughter struggled with homework, and one horse’s fear to complete a water jump set in precisely four strides before the leap.

As if she were Miss Cleo, the animal communicator works best on phone call readings in which she looks at a pet’s photograph.

Without face-to-snout interaction, the animal can’t confuse her with shy or nervous antics.

This skeptical journalist showed off a cellphone picture of her 3-year-old bunny, Clyde, to test the claims, only to be startled by the details he "told" the complete stranger about my personal life.

"It improves the relationship with the owner," Ranquet said of the communications. "Good relationships keeps animals in a ‘forever home.’ "

In search of that for Bruno, Hlavacek asked whether a single lady would make a suitable owner because one had made an offer in hopes the dog would be a protector.

"Protecting is not his main goal in life," Ranquet said. "I think food is more of his main goal. He’s all about food."

That prediction seemed odd for a dog that hadn’t yet sniffed out any mischief.

Soon enough, the stout fur ball balanced on his hind legs trying to reach a jar of treats on a table.