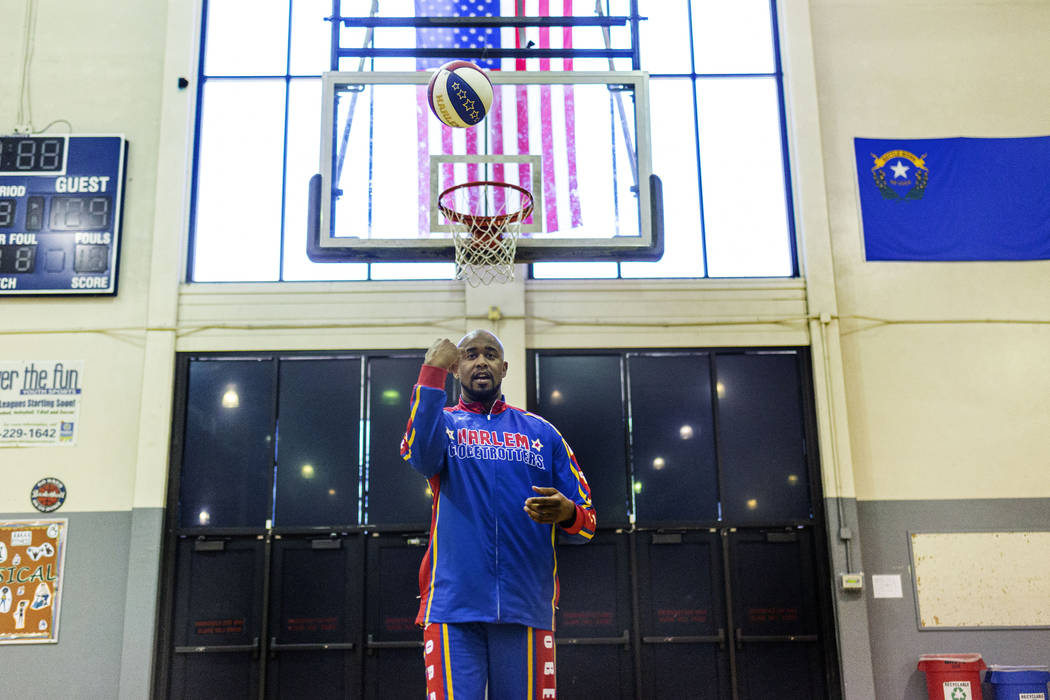 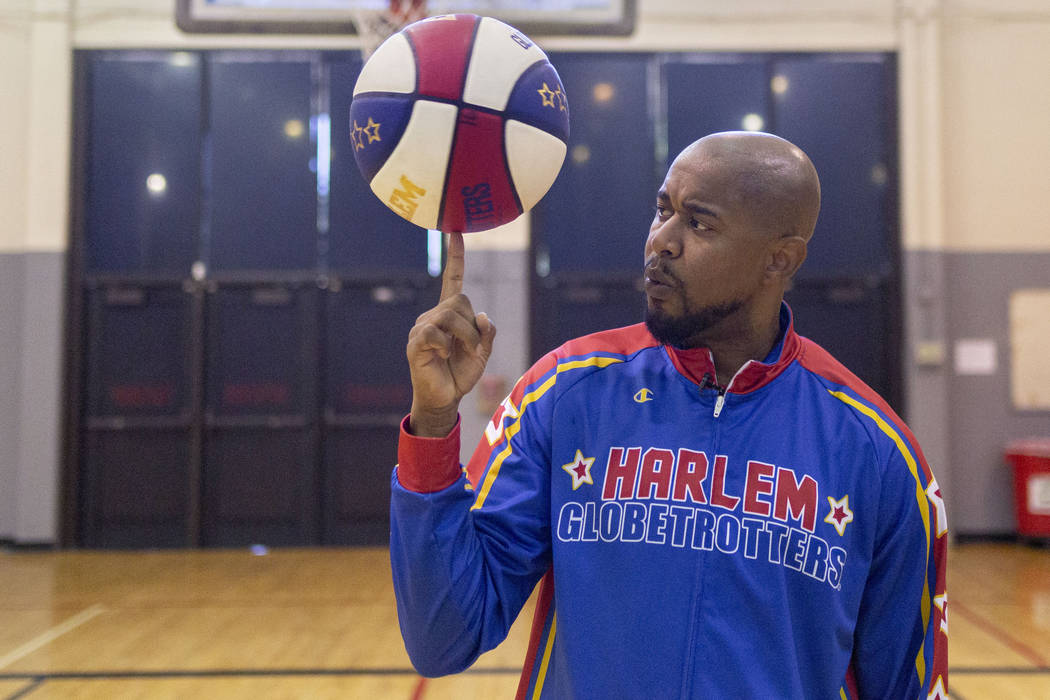 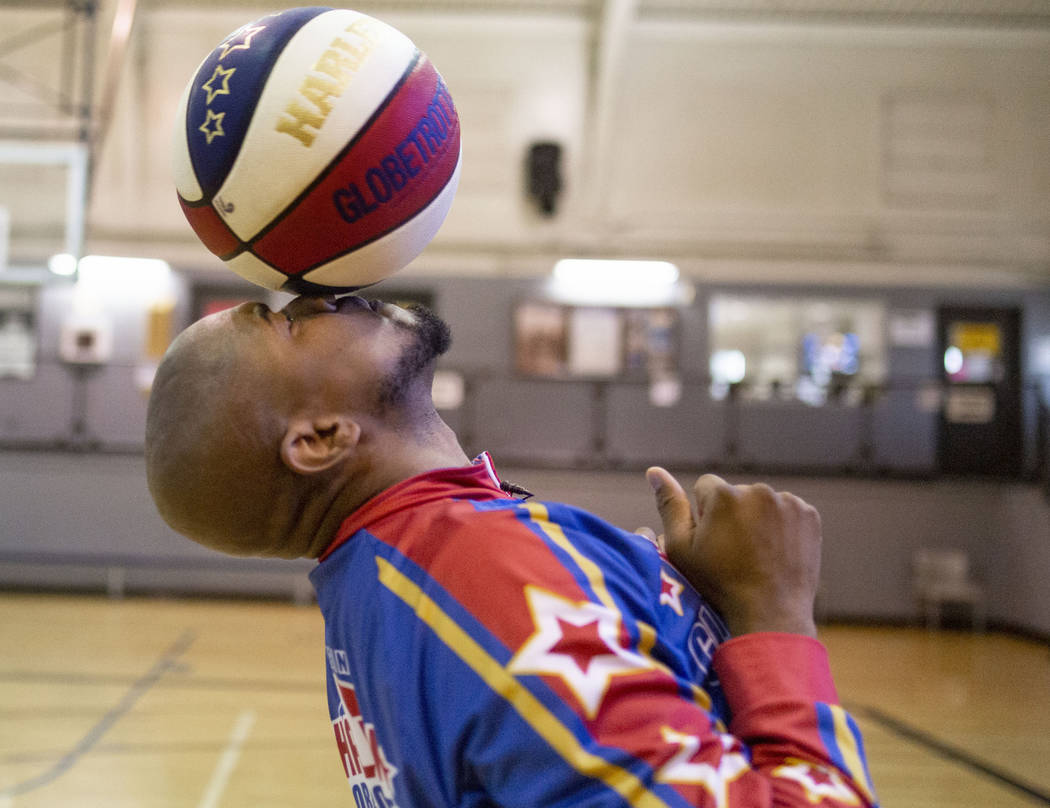 Las Vegas resident and Harlem Globetrotter Scooter Christensen at the Dula Gym in Las Vegas on Wednesday, Aug. 21, 2019. Christensen is known for spinning the ball on his head and nose, which earned him a position in the Guinness World Records book in 2015. (Elizabeth Page Brumley/Las Vegas Review-Journal @EliPagePhoto) 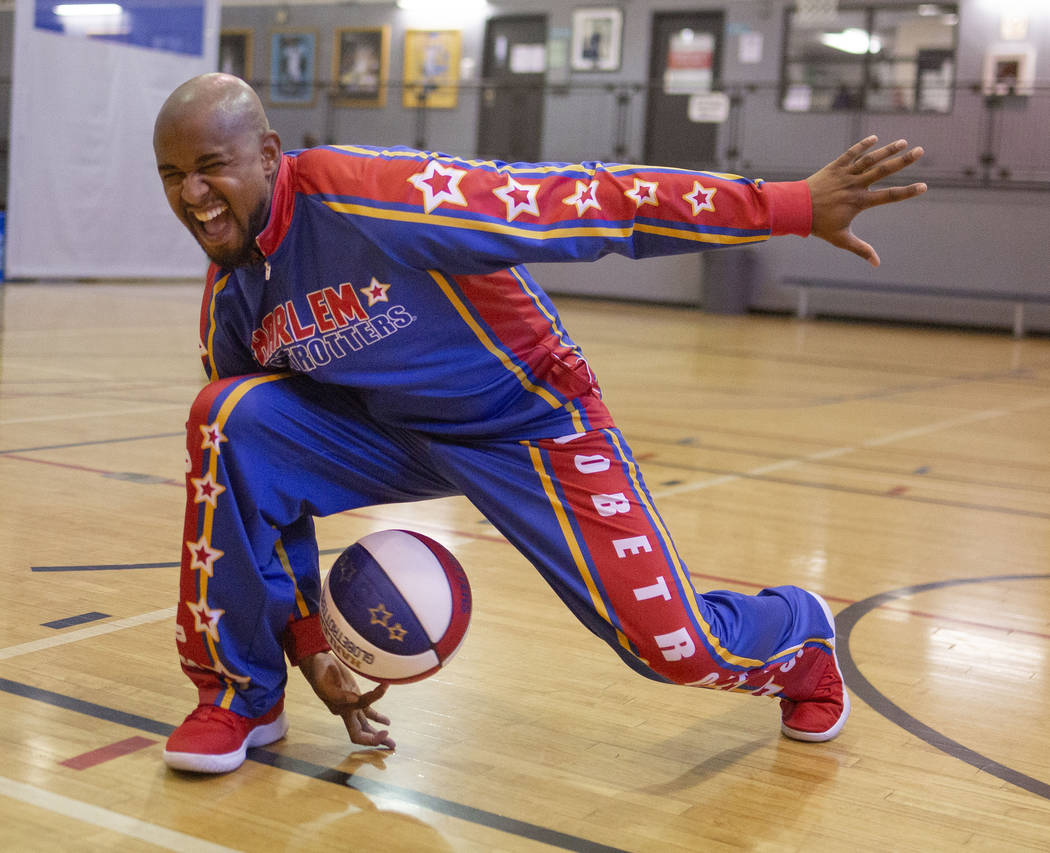 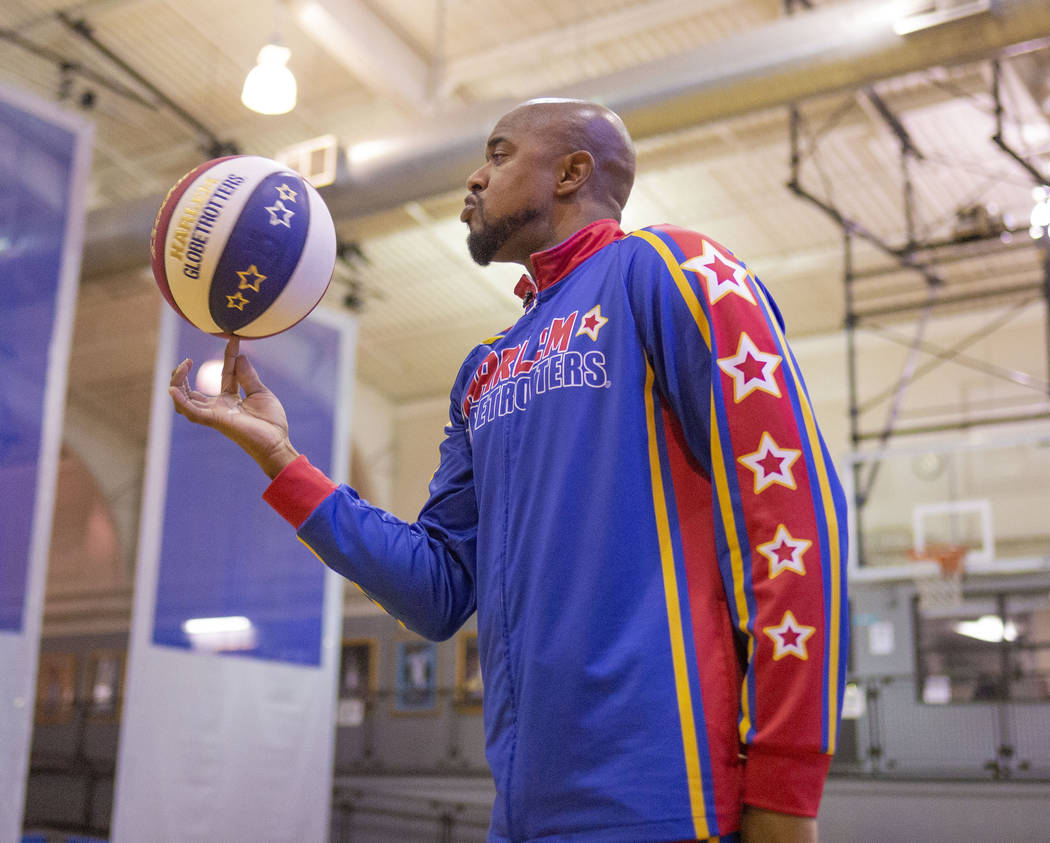 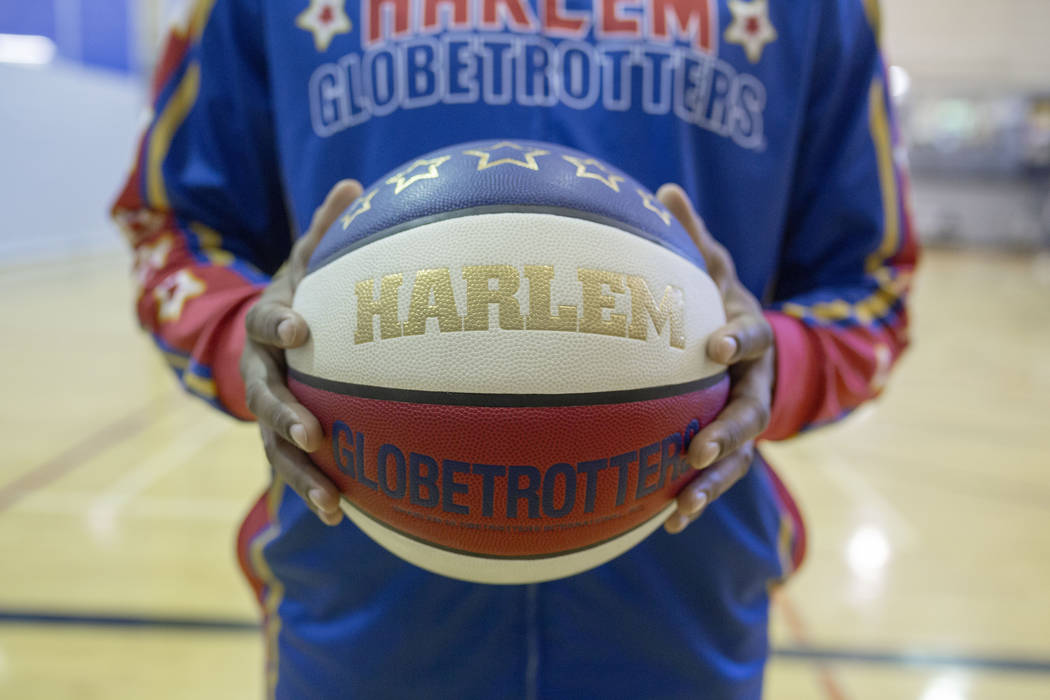 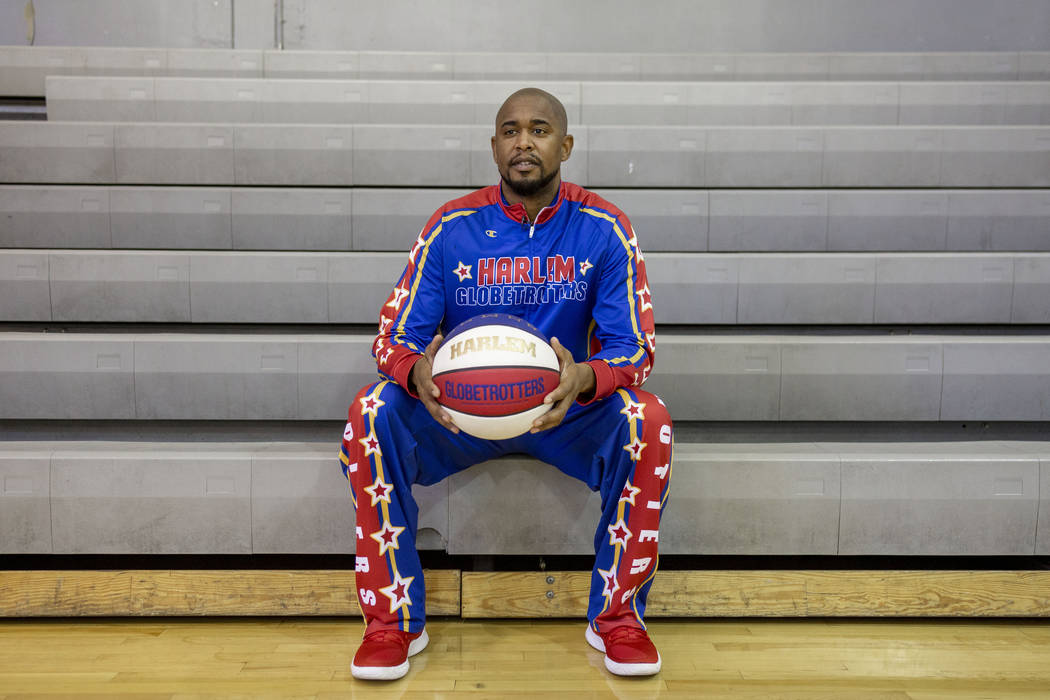 Shane “Scooter” Christensen of Las Vegas will join his teammates Sunday at The Orleans when the Harlem Globetrotters take the court.

Christensen, 40, graduated from Bishop Gorman High School in 1997 after helping the team win Nevada’s first 4A state title and accepted a full scholarship to the University of Montana, from which he graduated in 2002. Christensen joined the Globetrotters in 2005 and set the Guinness World Record for longest basketball twirl on the nose in 2009, then broke his record in 2016 with 7.7 seconds. He slowed down his dribble Wednesday morning to answer questions from the Las Vegas Review-Journal.

Review Journal: When did you start playing basketball?

Christensen: I was 5 years old. I went to Catholic school my whole life. … I started off in soccer, and then I did soccer, track and basketball. I was noticing I was getting taller, and my friends were staying soccer-height.

What was your first winter at the University of Montana like?

It was springtime when I verbally committed to them, and then when that winter hit I said, “they got me good,” because I’m from Vegas and I’d never seen snow before. It was different, totally different. Me on the outside looking in, (I) said this is the perfect place to get my studies done and play ball at the same time. It snows out here, so what else is there to do but go to the basketball game? I enjoyed it; I had a very good career in Montana. I got my bachelor’s degree in sociology and went to the NCAA Tournament in 2002.

What records have you set with your nose?

The first time I’ve ever seen that trick was a guy by the name of Michael “Wild Thing” Wilson; it was his 10th year on (the Globetrotters) and my rookie year. It was an honor and a privilege to get in the magic circle and showcase your skills. So I was in my first year but every time, he’d be the last guy to finish the circle and usually the last guy can handle the ball very well. I’m looking at this guy and I might as well have just bought a ticket every night. I would go home and practice it. Nose burns, nosebleeds, everything to get there.

The year that he retired, that next year at training camp there were so many guys trying to spin the ball on their head, because he could spin the ball on his head, and it’d fall off. When it was my turn to get in the circle, I did what I had to do; I took my time and instead of going straight to my head, I went to my nose and held it until it rolled onto my head and it stopped right there. … I remember him doing it on his nose and then hit the ball off and go to another trick, but I’ve mastered the point where I can spin the ball on my nose and then it rolls to my head all in one motion. That happens from me practicing so much.

What kinds of work have you done with the Globetrotters off the court?

I’m going to the schools to talk to the kids about if you’re getting bullied or see someone getting bullied and how to handle that situation, which is a huge problem going on today, especially with kids being bullied and knowing how to handle it socially. I think me and my teammates, we have a voice being the Globetrotters and knowing that when they see us they think nothing has ever happened to us, and I always let them know you get bullied as a kid but you can also get bullied as an adult, too. It’s just the way of the world. So if you know how to handle that, you never know whose life you’re saving, you never know who’s going through something in their household.

The Globetrotters play Sunday at 2 p.m. at the Orleans Arena. Tickets can be purchased on their website or at the box office. 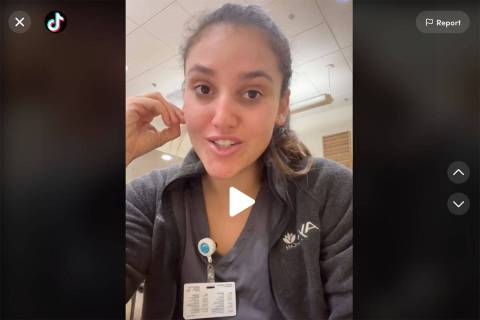 “There were just days where you felt like you were a chicken running with your head cut off,” traveling nurse Lauren Meadows said about her contract in Las Vegas. 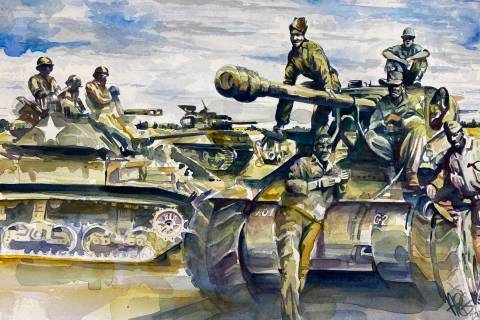 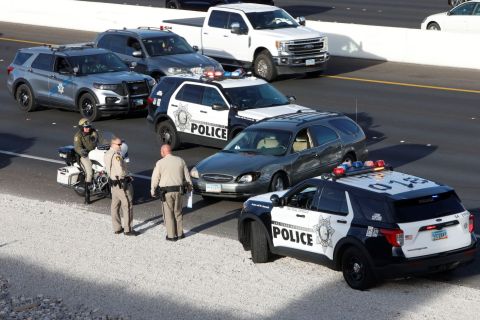 A portion of the 215 Beltway was closed in the Summerlin area Friday after Las Vegas police stopped a wrong-way driver, according to police and a witness. 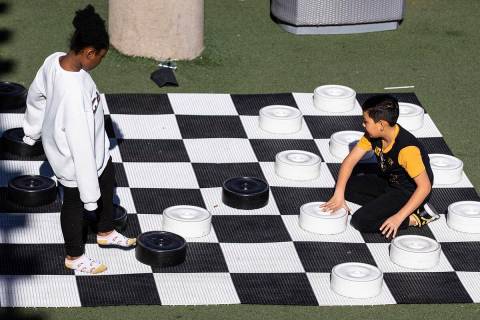