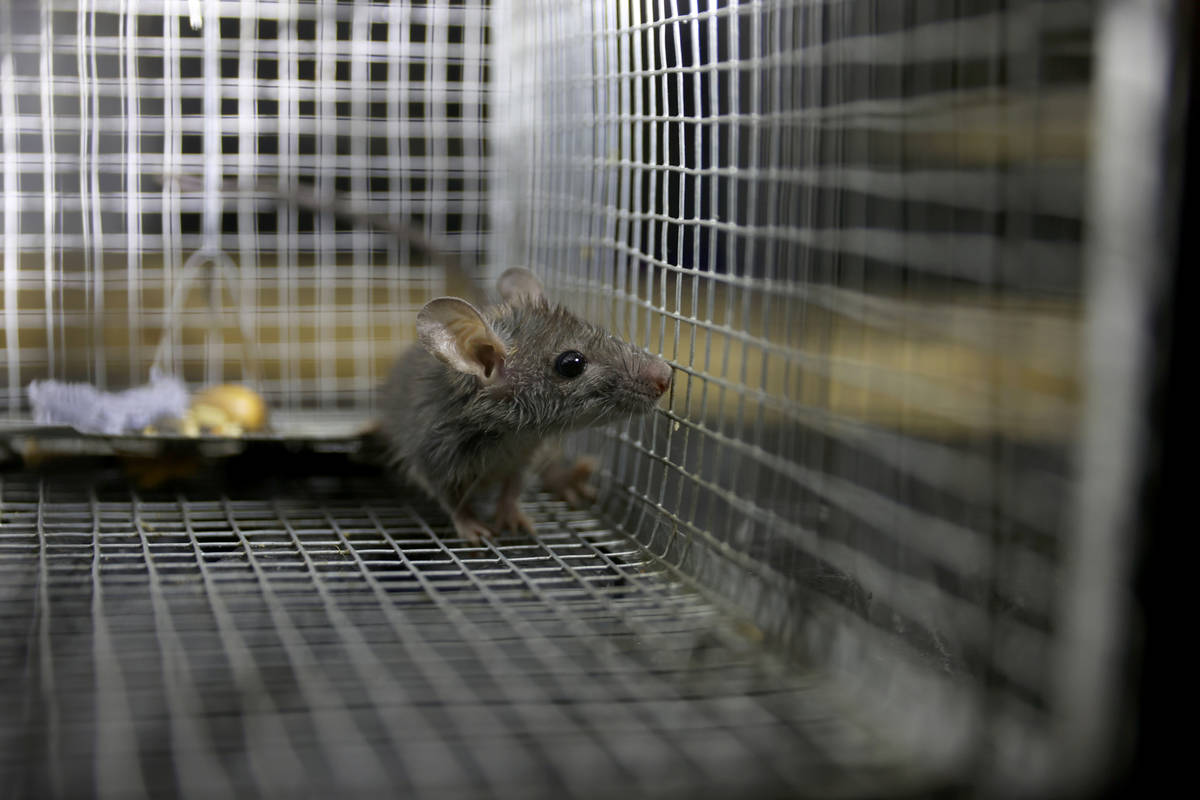 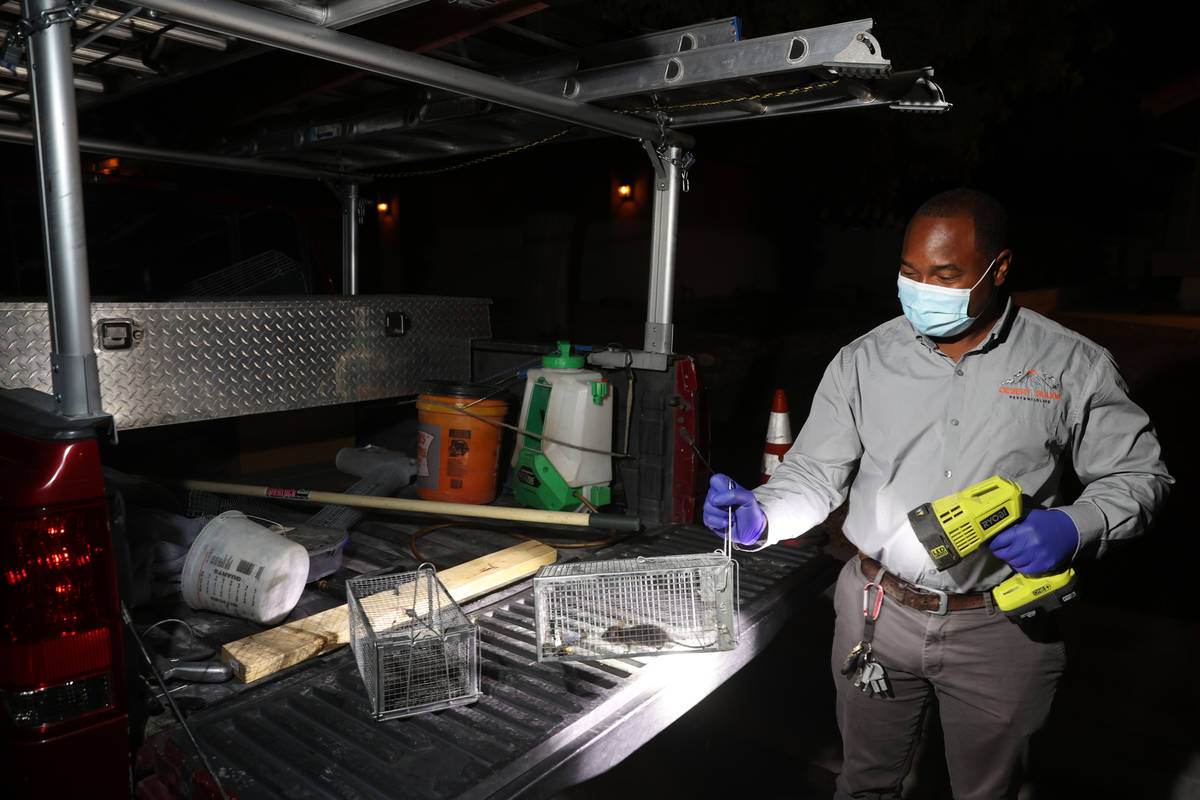 Micheal Linton, a pest and wildlife manager with Desert Squad Pest and Wildlife, with a roof rat he captured at a Henderson home Friday, Oct. 16, 2020. The rat was later released in the desert. (K.M. Cannon/Las Vegas Review-Journal) @KMCannonPhoto 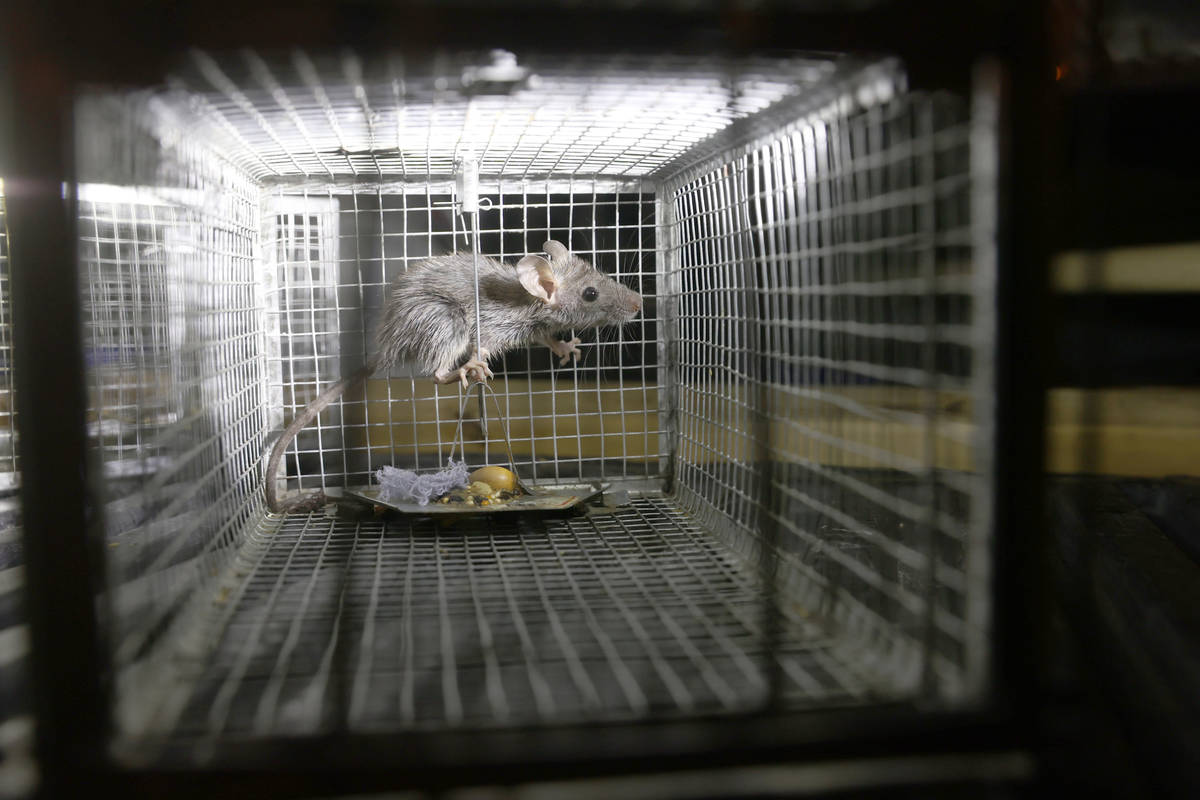 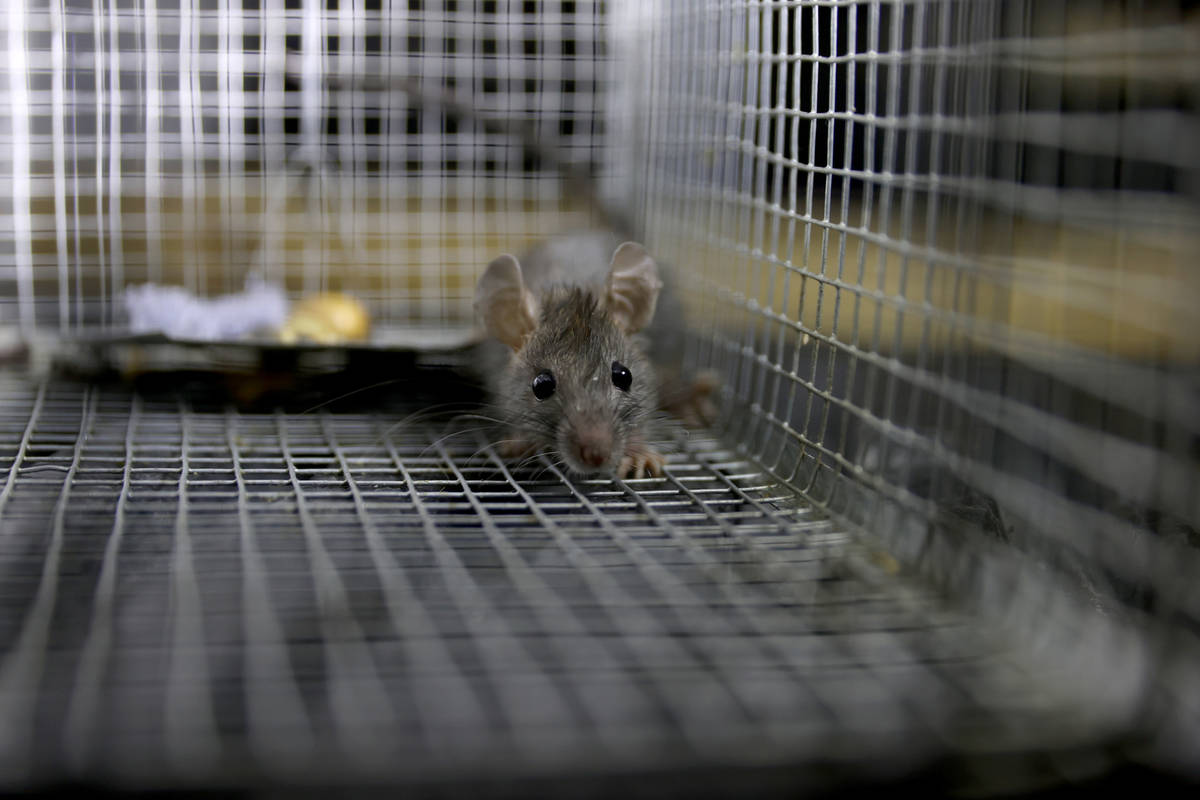 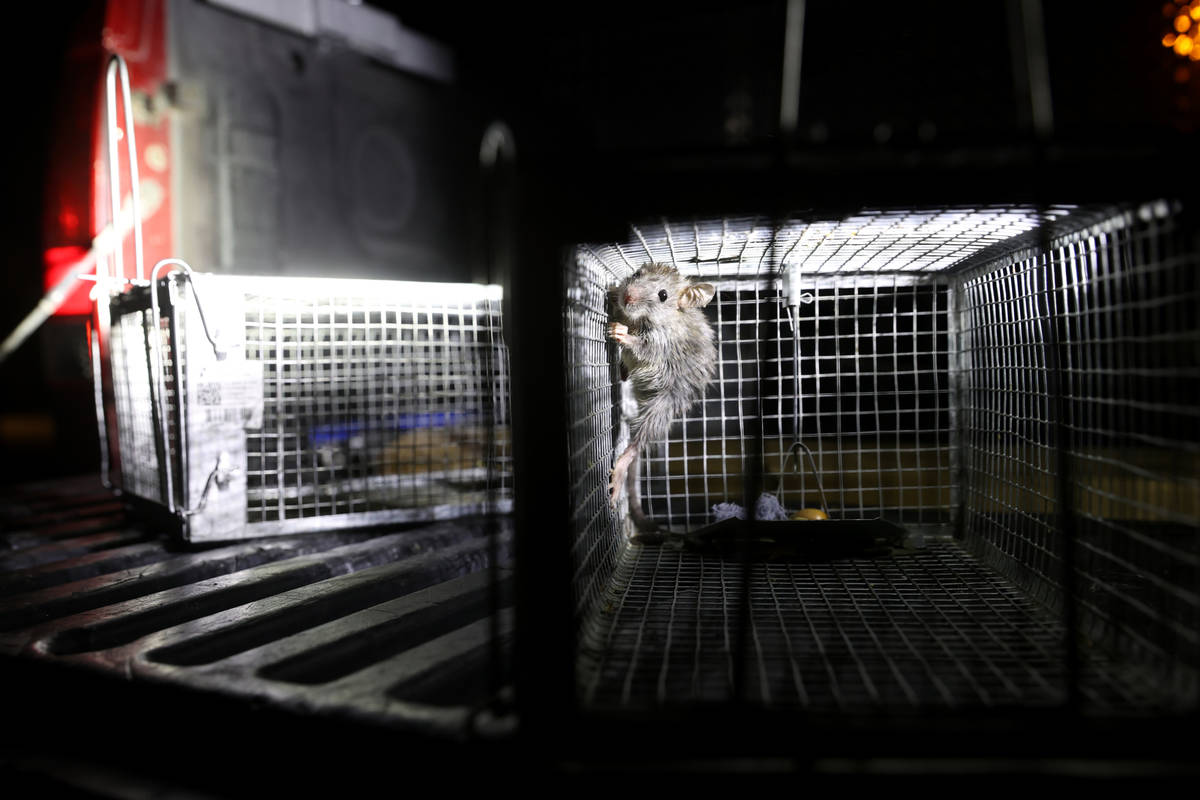 On a warm October evening in Henderson, Lille Allen had nearly finished a peaceful, 2-mile walk when the tip of her slip-on shoe squished down onto something.

She shifted her cellphone from view.

“Maybe it’s an animal,” she thought, glancing down.

Its mouth was open, its tail coiled.

The encounter on a spot of sidewalk near the Galleria at Sunset mall marked Allen’s first rat sighting in the Las Vegas Valley, where the 23-year-old has lived for a decade, and left her shocked and bewildered. She was only trying to get a little fresh air amid pandemic-driven isolation. Now she was speed-walking to her car, shuddering in disgust.

Exterminators across the valley are reporting a rise in rat-related calls — a familiar trend in the last few years as the area’s human population continues to increase.

But month by month, the pandemic has brought a particularly sharp rise in calls, they say. And a new trend emerged: The largest increase is coming from residential clients, as opposed to commercial clients, where exterminators more typically see surges.

There are three leading theories of explanation:

1. People are home more and therefore are more likely to notice rats, droppings or damage.

2. Pandemic-related shutdowns — which caused even the Strip to go dark for a few months — forced rats into neighborhoods in search of food, absent their usual dumpster buffets.

The increase in calls doesn’t necessarily mean there are more rats in the valley, according to D.N. Lee, a Southern Illinois University, Edwardsville assistant biology professor who studies the connections between ecology and evolution in rat behavior.

“Do we really have more rats, or do we have more complaints?” Lee questioned.

The only way to know is to conduct a rat census. But no local public agency tracks the valley rat population.

The Southern Nevada Health District used to track rat complaints, monitor the population and test a small sampling for plague and hantavirus. But in 2012, they cut the program.

“Rodent surveillance is not funded or mandated by statute,” Stephanie Bethel, an agency spokesperson, wrote in an email. “Without a dedicated funding source, the Health District was not able to sustain this program.”

The agency still provides educational information about rats on its website, which notes that the Norway rat and roof rat are the area’s most common. But if you want to report a rat sighting or need help with an infestation, “We advise homeowners to work with pest control companies,” Bethel wrote in an email.

Lee said that surprised her. In more densely populated cities like Chicago and New York City, public health departments test and track rats because they are “such a problem that it’s a dedicated concern.”

Here in Las Vegas, the lack of data raises the question of whether rats should be considered a dedicated concern. Lee noted they can spread “nasty things,” including salmonellosis and leptospirosis, a rare blood infection transmitted through bacteria in animal urine.

Jamie Voyles, a disease ecologist and associate professor at the University of Nevada, Reno, said that while rats are known carriers of plague and hantavirus, which can be fatal in humans, they are not iconic carriers, such as deer mice and ground squirrels.

“I think it’s interesting, and something to take a look at, but I don’t know that it’s cause for alarm,” she said of the health district cutting its program.

Still, rats are an undoubted nuisance. When the Review-Journal asked Clark County officials if animal control records or responds to rat calls, a spokesperson confirmed the agency does not. In the same email, the spokesperson noted he was dealing with a rat problem at home.

“We’ve set out traps,” the spokesperson wrote. “Lovely experience, I can tell you that!”

‘In every ZIP code’

George Botta, commercial account manager for Las Vegas Pest Control, echoed several others in the field: Rat calls, specifically residential ones, are definitely up this year — across the board.

“Unfortunately, they are in every ZIP code,” said Botta, who has been working for 42 years as a local rat exterminator.

They like areas with vegetation, so homes near golf courses or large swaths of greenery are particularly vulnerable. But so are homes in more urban areas, where rats can depend on food waste from restaurants and bars.

“They need food, water and shelter just like everything else,” said Jason Kibby, with Henderson Pest Control. “So, without that food source in the dumpsters, they’ve had to adapt and change their behaviors as well.”

Michael West, who works as an exterminator for R and C Pest Control LLC, gave an example: He services an HOA in Henderson that borders a Catholic school. Since the school has been closed amid the pandemic, rats apparently gave up on cafeteria dumpsters and migrated to nearby homes, resulting in more calls.

The weather doesn’t help either. In the summer, during extreme heat, it’s common for rats to seek out air-conditioning ducts, chewing toward cool spots, according to Micheal Linton, of Desert Squad Pest and Wildlife, which exterminates rats but also catches and releases them in the faraway desert upon request.

In the cooler months, they will be seeking warm spots, chewing into attics.

How to keep rats at bay:

If you’ve been dealing with a rat problem at home or want to prevent one, exterminators gave the following advice:

1. Trim tree limbs at least 3 feet back from home walls. Rats climb easily, especially stucco, but can’t hang upside down. So if you have eaves on your home, they can’t quite maneuver onto the roof. But tree limbs provide access.

2. Seal pet food or birdseed. Rats can chew into almost anything, and they have an excellent sense of smell. So, instead of leaving exposed bags in the garage or inside your home, consider sealing them in a tub or aluminum trash can.

3. A rat needs an opening only about the size of a nickel to squeeze itself in. Seal or weather-strip any small openings or pipe chases to prevent easy access.

4. Close trash can and recycle bin lids, if possible. Food waste is a common draw.

Still, some things you can’t control: older, rusty pipes or the public sewer system. If you find yourself with a problem, it’s best to call an exterminator.