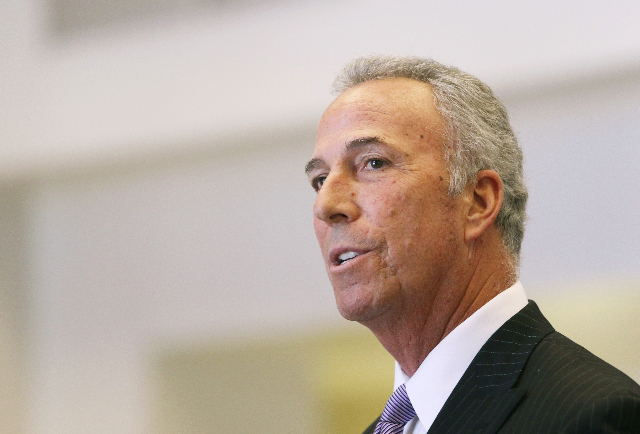 More than a dozen sex offenders are challenging the Nevada Parole Board’s authority to impose conditions on their lifetime supervision.

The offenders, identified only as Does 1-16, filed a federal lawsuit Tuesday against several state and local officials, including Nevada Attorney General Adam Laxalt.

According to the lawsuit, the Parole Board has relied on an unconstitutional Nevada law to place movement and residency restrictions on convicted sex offenders who are under its supervision. In some cases, those restrictions have prevented the plaintiffs from attending religious services or associating with certain people in certain areas.

“The state of Nevada should not be allowed to violate the Constitution,” attorney Robert Draskovich said. “It doesn’t matter whether a person has been convicted of an offense that the public may hate. No one is above the law, and it should be followed.”

Draskovich and two other Las Vegas attorneys, Gary Modafferi and Allen Lichtenstein, are representing the plaintiffs in the case.

The plaintiffs seek a permanent injunction to prohibit enforcement of the law, officially known as Nevada Revised Statute 213.1243. The statute, passed in 1995, gives the Parole Board authority to establish a program of lifetime supervision. Residency and movement restrictions were added to the law in 2007.

According to the complaint, the law:

• Violates the First Amendment by infringing on the plaintiffs’ freedom of religion and right to assemble.

• Violates the double jeopardy clause of the Fifth Amendment because it imposes multiple punishments for the same crime.

• Violates the Eighth Amendment prohibition against cruel and unusual punishment, because violating a condition imposed by the Parole Board subjects an offender to another felony and a mandatory sentence of one to six years in prison.

“The sentence received for a violation of a condition inflicts a sentence disproportionate to the actual condition violated,” according to the document.

• Violates the due process and equal protection clauses of the Fourteenth Amendment.

• Violates the ex post facto clause, because “these punitive conditions did not exist in law when the plaintiffs committed their offenses.”

• Violates the contract clause, because it “substantially impairs the terms of plaintiffs’ plea agreements by imposing conditions that did not and do not exist in any statute.”

• Violates the separation of powers doctrine “by delegating the power to legislate to an executive agency without any intelligible standards and allowing the executive agency to interpret and apply the law,” thereby infringing on the powers of both the legislative and judicial branches.

• Violates the bill of attainder clause by allowing the Parole Board “to inflict further punishment without a judicial trial.”

Among the plaintiffs in the case is “Doe 7,” a Las Vegas man who pleaded guilty in 1997 to sexual assault and battery with the intent to commit sexual assault. He received a prison term of 10 to 25 years and was released on Nov. 30, 2010. He is now on lifetime supervision with more than 21 conditions imposed by the Parole Board.

“Doe 7 had difficulties finding a job due to the conditions that he is subject to,” the complaint alleges. “Doe 7 also incurred expenses for computer monitoring on his work and personal computers, which can be faulty and corrupt his work files by no fault of his own. This has created a financial burden to Doe 7 considering that he also has a family he needs to provide for. Furthermore Doe 7 has family out of state and has difficulty seeing them due to movement conditions imposed on him.”

Another plaintiff, “Doe 13,” is an Arizona resident who committed a sexual offense in 2006 and accepted a plea agreement the following year. He was sentenced to probation with lifetime supervision.

According to the lawsuit, the conditions of his supervision “have had a disabling impact” on his life, including forcing him to stop working as a phone line splicer because of travel restrictions.

“He has not been able to engage in any relationships with the women he has met because they have children and he cannot be near children,” the document claims. “He cannot go to a movie without getting prior permission. Recently, his best friend died but he was unable to attend the funeral because of the travel restrictions.”

Among the officials named as defendants in the case are Clark County Sheriff Joe Lombardo and Clark County District Attorney Steve Wolfson. Neither could be reached for comment. Patty Cafferata, spokeswoman for Laxalt, said in an email that the attorney general’s office does not comment on pending litigation.