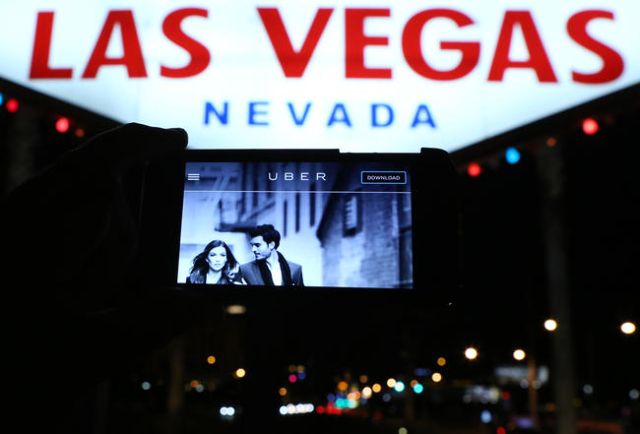 What started as a do-over on a county ordinance for ride-hailing licensing in Clark County has erupted into a pressure campaign urging something Uber already is allowed to do — operate at McCarran International Airport.

When the Clark County Commission meets Tuesday morning, it is expected to reconsider one of two ordinances it unanimously approved Nov. 17. The ordinance at issue requires contracted Uber and Lyft drivers to acquire a Clark County business license for $25 a year.

Commission Chairman Steve Sisolak requested reconsideration of the ordinance after receiving a memorandum dated Nov. 18 from county counsel Mary-Anne Miller in the Clark County District Attorney’s Office. Miller recommended that a revised ordinance strike the language on business licensing because the state law allowing ride-hailing companies prohibits municipalities and counties from adding licensing requirements not required of other businesses.

That same legislation clearly allows airports to charge a fee if drivers pick up passengers on airport grounds. Uber already has signed off on $2.45 per pickup and drop-off at McCarran.

“I am one of the tens of thousands of riders in the Las Vegas community who depends on Uber to get around,” the letter says. “Unfortunately, I can’t get an Uber ride to or from McCarran Airport. This safe, reliable, and affordable transportation option shouldn’t be caught up in politics. I’ve come to depend on Uber in Southern Nevada and my ability to get to and from the airport shouldn’t be an exception. Please allow Uber at the airport.”

Uber also enlisted a powerful ally, the Consumer Technology Association, operators of the giant International Consumer Electronics Show in Las Vegas every January. CES then issued a statement critical of the county.

“We are disappointed that the Clark County Commission is making it difficult to access ride-sharing services on the Las Vegas Strip and at McCarran Airport,” the association’s statement says. “A vibrant array of convenient transportation options is a key element of Las Vegas’ success as a world-class tourism destination.

“Given that Nevada law allows for ride-sharing services throughout the state, we urge the Clark County Commission to enable ride-sharing services to operate effectively in Las Vegas. The people of Las Vegas and the city’s more than 40 million annual visitors deserve to have reasonable access to the transportation options that they use in other world-class cities.”

Airport officials say access to McCarran has never been an issue, noting that Lyft has been operating there since Oct. 26.

At the Nov. 17 commission hearing, Uber officials expressed concern that McCarran’s geofencing system, which monitors transportation network companies and calculates fees, would not be able to handle the high number of drivers Uber expects to have.

But some critics say that’s a smokescreen — Uber is trying to prevent the county from getting a list of contracted drivers the company considers proprietary information. The county wants a list of driver names or numbers ensure all pay up. Uber contends the county doesn’t need it.

Dave Sutton, a spokesman for the adversarial “Who’s Driving You?” public awareness campaign sponsored by the national Taxicab, Limousine and Paratransit Association, said the licensing and identification of ride-hailing drivers is an important consumer protection.

“Uber driver impostors have reportedly kidnapped, raped and robbed passengers,” Sutton said after the commission approved the ordinances. “Requiring Uber drivers to get business licenses will help prevent crime by impostors. The more readily enforcement authorities and police can identify real Uber drivers, the easier they can catch dangerous fakes.”

“I am aware of Clark County’s proposed ordinance and understand that its constitutionality may be at issue,” Laxalt said in a statement last week.

“When a party challenges the constitutionality of a statute or an ordinance, the attorney general is entitled to be heard on the questions presented in that lawsuit,” he said. “In this instance, a lawsuit has not yet been filed, but my office will continue to monitor the situation.”

Proponents say giving drivers the ability to use cabs for a flat fee would give them more flexibility in scheduling and allow them to keep most of the revenue collected in fares. Leasing was authorized by state lawmakers in June and takes effect Jan. 1.