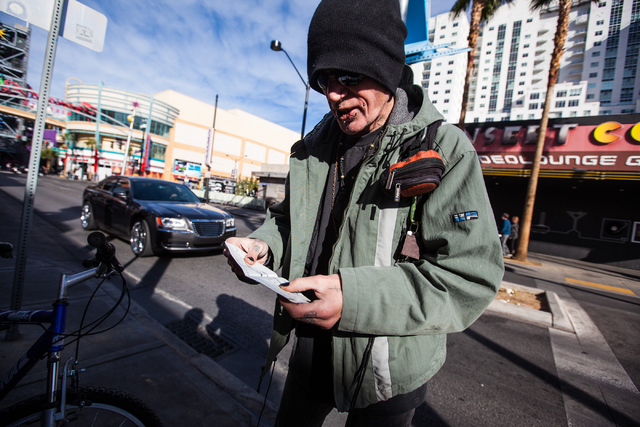 Russell Yeager looks through his itinerary for the afternoon before biking to local shops in the downtown area of Las Vegas on Friday, Jan. 16, 2015. Yeager has been living in a halfway home, where he also works as part of the staff, since his release from prison on parole in January 2014. He was visiting shops that could potentially carry his artwork for sale. (Chase Stevens/Las Vegas Review-Journal) 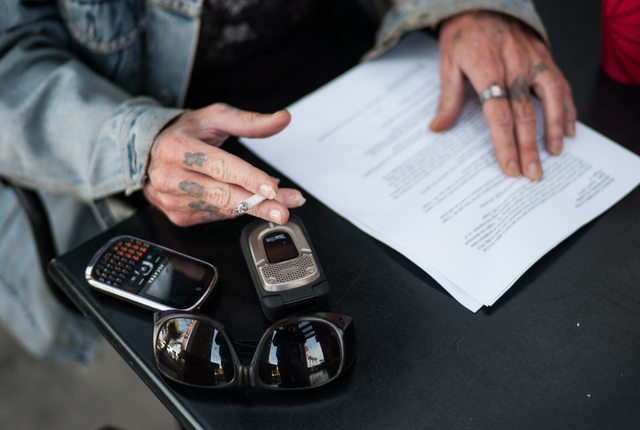 Russell Yeager goes through paperwork during an interview with the Review-Journal outside of a Starbucks at Decatur Boulevard and Sahara Avenue in Las Vegas on Monday, Nov. 24, 2014. Yeager has been living in a halfway home, where he also works as part of the staff, since his release from prison on parole in January 2014. (Chase Stevens/Las Vegas Review-Journal) 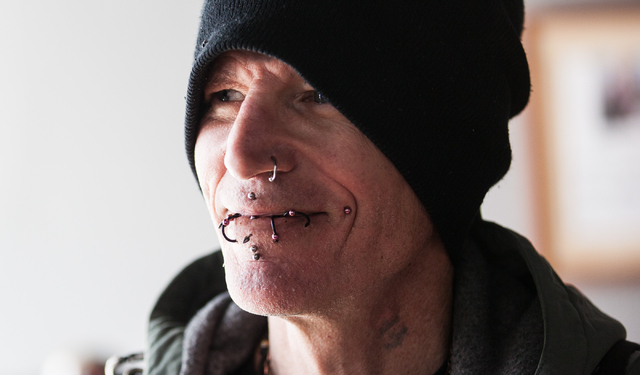 Russell Yeager talks with shop owners Melissa Eggstaff and Ian Shields (not pictured) at Haven Craft, a local shop specializing in occult and artisan goods, in downtown Las Vegas on Friday, Jan. 16, 2015. Yeager has been living in a halfway home, where he also works as part of the staff, since his release from prison on parole in January 2014. He was visiting shops that could potentially carry his artwork for sale. (Chase Stevens/Las Vegas Review-Journal)

The American Civil Liberties Union of Nevada is calling for an outside review of the state’s broken parole system.

The group surveyed prisoners following a Las Vegas Review-Journal investigation that showed inmates are often granted parole but not released due to a system that keeps poor prisoners behind bars at taxpayer expense.

But state government has kept silent despite this obvious, expensive problem and ensuing media coverage, ACLU of Nevada Legal Director Amy Rose said. She noted parole wasn’t brought up earlier this week at a Board of State Prison Commissioners meeting in Carson City.

The flawed system doesn’t just cost taxpayers, Rose said, it puts them at risk because many of the prisoners will eventually be released when their sentences run out. Then, she said, they will be angry, frustrated and outside the oversight parole provides.

Parole and Probation and the Nevada Department of Corrections know the system is broken and admitted to it a decade ago, ACLU of Nevada Director Tod Story said. An internal review was done in 2005 and found parole needed a serious overhaul.

Yet it appears that review was incapable of fostering change, Story said.

Since the state couldn’t fix the problems a decade ago, Story said he has no confidence an internal review would make any difference now. He is urging the government to have an outside contractor inspect Nevada’s parole system.

The ACLU report found that in addition to punishing the poor, the parole system boasts about programs and resources that appear to exist only in theory.

“If you claim that you have a system or program in place that is doing X, Y and Z and yet the inmates are unfamiliar with the program, have never heard of its existence and have never participated in a class, and 60 percent have never met their coordinator, does it really exist?” Story asked.

The ACLU surveyed 75 inmates that were paroled but, for whatever reason, still in prison. The group received 43 responses and found none of the inmates knew about classes to help them prepare for parole, many hadn’t met with officials assigned to help them with their parole and most — 80 percent — were stuck because they couldn’t pay for or secure a place to live once released.

Parole and Probation has attributed the parole backlog to inmates that don’t want to leave prison.

But the prisoners who told the ACLU they refused parole — 20 percent of those surveyed — did so because of how challenging it was to create a plan to get out.

If inmates can’t get money up front, and most can’t, the taxpayers end up paying for them to stay in prison, even though the parole board has determined that isn’t necessary, Rose said.

A Review-Journal investigation found poor inmates can sometimes remain stuck behind bars for years after being granted the privilege of parole.

As it stands, Nevada taxpayers pay about $4 million a year to house and feed inmates the government determined should be let out.

Story wondered why the ACLU found that only 13 percent of inmates surveyed knew about grant funds available and said there should be a way to help inmates who, for whatever reason, don’t meet that fund’s requirements. He suggested it might be worthwhile to look into a loan program for inmates.

Housing money for poor prisoners is limited. The Legislature appropriated $68,928 for fiscal year 2014-15.

Nevada Parole Board Chair Connie Bisbee said she’s not sure the state has any problems to fix.

Bisbee felt Thursday’s survey leaned too heavily on a “goofy” 2005 report from the ACLU that accused her board of dragging its feet to release inmates eligible for parole.

She pinned many of today’s backlog problems on parolees’ refusal to leave prison before their term expires. The state’s own statistics show such refusals accounted for only around 6 percent of parolees stuck in April’s backlog.

Bisbee said the state does advertise indigent funds available to aid parolees’ transition out of prison and wagered there wasn’t “a single inmate” who hadn’t been made aware of those funds.

She conceded the state could probably use additional halfway houses, but stopped short of saying those facilities ought to be built.

“I think the state would do a lot of things if we had an endless pot of money,” Bisbee said. “(Parole and Probation) is doing a darn good job with what they’ve got.”

A spokeswoman for Gov. Brian Sandoval said a statement from the governor was forthcoming.

Parole and Probation Capt. Dwight Gover was forwarded a copy of the ACLU’s survey but did not immediately return phone calls and emails seeking comment.

Governor Brian Sandoval, who told the Review-Journal in February he would look into the parole backlog, did not respond for requests for comment Thursday. .