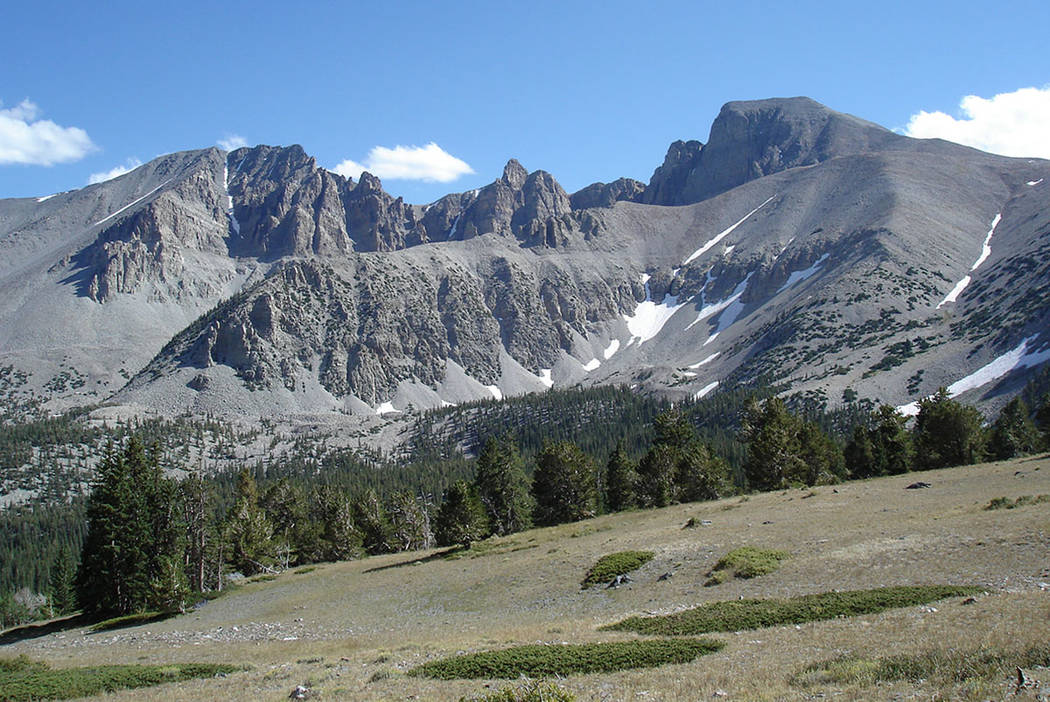 The 13,063-foot summit of Wheeler Peak, right, rises above Great Basin National Park, 300 miles northeast of Las Vegas. The shorter summit at the left of the frame is Jeff Davis Peak, which was named for U.S. Secretary of War-turned-president of the Confederacy Jefferson Davis. (National Park Service)

Nevada’s Great Basin National Park is home to a mountain peak named for Confederate leader Jefferson Davis, but officials there say they’d never fielded any complaints about it.

Since the deadly Aug. 12 rally in Virginia sparked by white supremacists angry over plans to remove a statue of Confederate Gen. Robert E. Lee, the national park 300 miles northeast of Las Vegas has received a handful of inquiries about the oddly named Jeff Davis Peak.

Now there is a formal push to rename Nevada’s third-tallest summit.

A pair of applications were filed recently with the boards in charge of naming things.

One application suggests several possible replacement names for Jeff Davis Peak, including that of the late Las Vegas civil rights leader James McMillan and several old Western Shoshone terms for the mountain top. The other application calls for the peak to be named for Robert Smalls, an escaped slave from South Carolina who fought for the Union and was later elected to Congress, but who has no real connection to Nevada.

Obscure office will make the call

The final arbiter of such things is the aptly named branch of the U.S. Geological Survey called the Board on Geographic Names. People can petition the board directly or make a request at the state level first, but the entire process can take a year or more either way.

Davis’ name originally graced what is now known as Wheeler Peak, the tallest summit in the Snake Range and Nevada’s second highest point at 13,063 feet, trailing only 13,140-foot Boundary Peak. During a survey of the Great Basin in 1855, Lt. Col. Edward Steptoe from the U.S. Army Corps of Topographical Engineers spotted the peak from a distance and named it for his boss, then-U.S. Secretary of War Jefferson Davis.

There was talk of changing the name — possibly to Union Peak — after Davis sided with the secessionists, but nothing was done until after the war, said Nichole Andler, chief of interpretation at Great Basin National Park.

The mountain finally got a name that stuck during another mapping expedition in 1869, when the peak was scaled by George Montague Wheeler, a 27-year-old lieutenant with a pretty high opinion of himself.

Once the highest point in the range officially became Wheeler Peak, the president of the slave states was demoted to the shorter, 12,771-foot peak directly to the east.

Maps and signs in the national park still refer to the smaller summit as Jeff Davis Peak, at least for the time being.

The two applications received so far are now in the hands of Nevada State Board on Geographic Names, which will review them and make recommendations to the national naming board.

Christine Johnson, executive secretary for the Nevada board, said a similar effort is also underway in California, where the state naming board recently received a pair of applications to rename Jeff Davis Peak in the Sierra Nevada.

The obscure, 9,065-foot mountain top is about 20 miles south of Lake Tahoe, near Jeff Davis Creek.