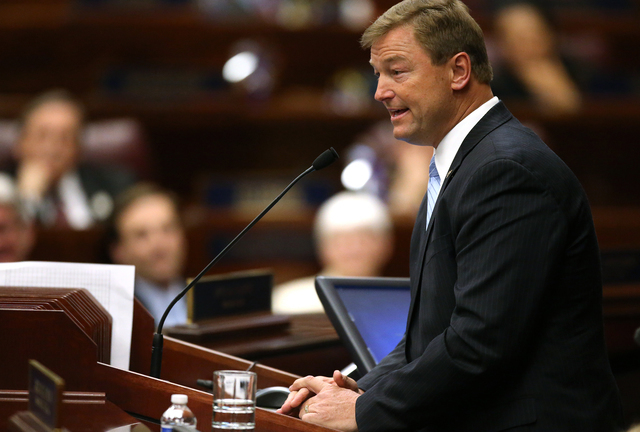 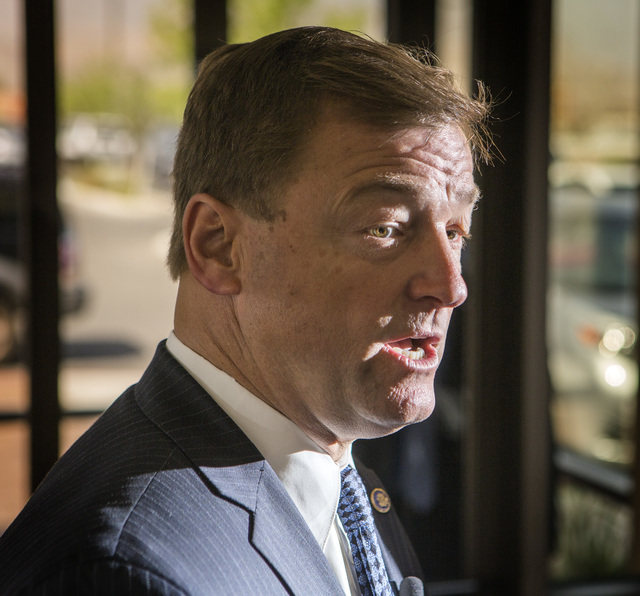 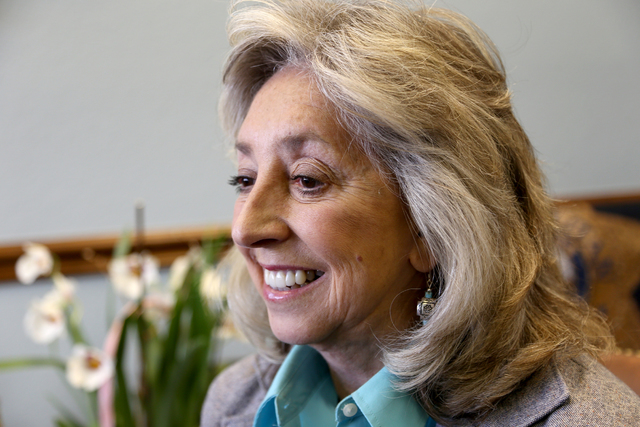 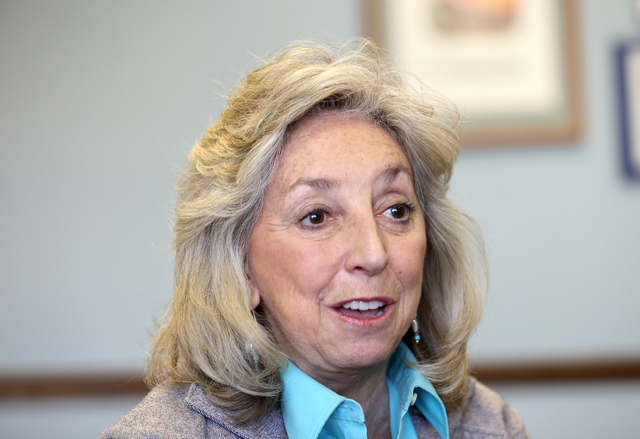 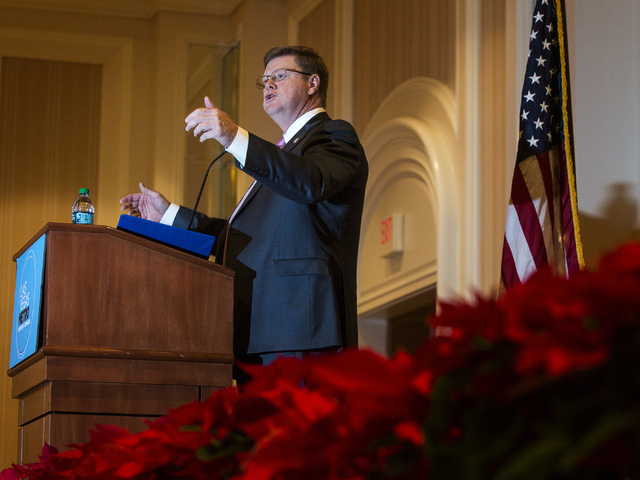 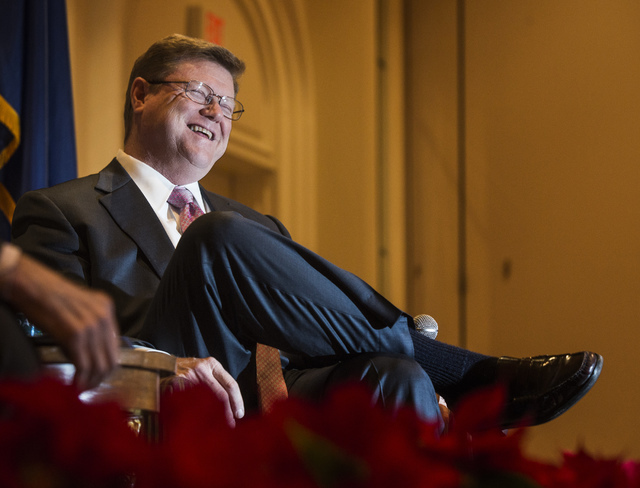 Who made the United States a refuge for secretive shell companies?

Look to Congress to find politicians who helped turn Nevada into a major home for shell companies, which can be used to evade taxes and hide illegal assets from around the world.

Sen. Dean Heller, R-Nev., now a member of the Senate Finance Committee, while he was Nevada’s secretary of state, was a strong advocate of a 2001 state law that broadened legal protections for shell companies, allowing the identities of owners to remain secret.

The change made incorporating a company easier than getting a library card and helped spur the registration of thousands of shell companies in Nevada.

Dina Titus, who in 2001 was the Democratic leader in the Nevada state Senate and voted for the change, is now a member of Congress. So is Rep. Mark Amodei of Nevada, a key Republican proponent of the 2001 bill.

Heller and Titus now acknowledge that the Nevada legislation created unwelcome business practices. Titus even predicted in 2001 that it would attract “sleazeballs.” And foreigners have long used Nevada shell companies, sometimes for corrupt purposes.

Don’t bet on Congress to tighten the laws on shell companies.

Neither state nor federal lawmakers seem eager to pursue proposed changes. Some Nevada politicians look to Congress to take action, while those on Capitol Hill often say it is up to the states to monitor and regulate corporations.

The revelations from the Panama Papers, an archive of documents leaked from a Panamanian law firm that specializes in creating shell companies worldwide for its clients, revealed how corrupt politicians and others seeking to hide their wealth used shell companies.

The Panama Papers were first obtained by the German newspaper Suddeutsche Zeitung and shared with the International Consortium of Investigative Journalists, which partnered with McClatchy and other media outlets from 75 countries to search the 11 million documents.

McClatchy and its partners revealed in previous reports how offshore companies were used in a $3 billion corruption scandal in Brazil that two months ago cost Brazilian President Dilma Rousseff her job, pending impeachment proceedings. Fifty-seven individuals set up 106 offshore companies, some of them in Nevada, through the Panama law firm Mossack Fonseca.

A database obtained from the Nevada secretary of state’s office shows 307,210 active corporate entities in the state, 22,060 with shareholders or managers listing addresses outside the United States, and 6,075 active entities with foreign addresses. The rest had U.S. addresses.

As corporate filings in Nevada have increased, the state has profited. In the most recent fiscal year, Nevada collected nearly $144 million from corporate registrations, annual filings and other associated charges. The state had $6.9 billion in total revenue.

DELAWARE OF THE WEST

In 1991, Nevada began offering rapid incorporations with the goal of becoming the Delaware of the West, a reference to the state with a century-old history of serving as legal homes to thousands of U.S. corporations. Attempting to lure business, Nevada boasted of its lack of a personal or corporate income tax, and its guarantees of privacy.

An industry of law firms and corporate registration agents with lobbying clout has won friends in the state Republican and Democratic parties.

Lawmakers in 1996 changed the Nevada Constitution to require that any tax increase required a two-thirds vote in the state Senate and Assembly. Nevada became one of only seven states with such a “supermajority” requirement for tax increases.

Then the state ran into financial trouble. In the spring of 2001, Nevada had a budget shortfall of $130 million. One solution to close the gap was to amend the incorporation laws to raise fees and relax some conditions.

Its sponsors framed it as an “educational enhancement package” designed to keep schools solvent. The proposal called for doubling the state’s initial corporate filing fee to $165 and limiting the liability of owners of Nevada corporations. Proponents said the plan would protect the state’s children.

“What a terrible message we are now sending to the business world. We might as well hang out a shingle, ‘Sleazeballs and rip-off artists welcome here,’” Titus, then a state senator, said at a hearing on May 26, 2001, according to a transcript.

“I think we will see a shift in the quality and the quantity of the kind of business we do,” Heller said, according to a transcript.

His advocacy paid off. The final vote in the state Senate was 18-1. In the state Assembly, it passed 40-0.

A Democratic state senator, Bob Coffin, cast the sole opposing vote, warning that “scoundrels” would come to Nevada to set up corporations and limited liability companies.

“The push came from people in the incorporation business who showed how much could be done,” Coffin said, referring to revenue from filing fees.

Heller said the pressure for the 2001 legal change came from the state Legislature, not his office.

“The Legislature came to us and asked the secretary of state’s office to increase revenue coming out of that office,” Heller said. “I think at that time, the secretary of state’s office was the third- or fourth-largest revenue producer for the state of Nevada. … The majority leader and the speaker both came to the office and said, ‘Hey, can we increase revenues out of your office?’”

Amodei, a key proponent in the Legislature in 2001, said the bill was intended to make Nevada more economically competitive with Delaware.

EASIER THAN A LIBRARY CARD

Registering a company or partnership in Nevada is remarkably easy. You can do it online without providing any identification.

“You can do it in 10 minutes,” said Eric H. Franklin, a professor at the School of Law at the University of Nevada, Las Vegas. “For a library card, you need to provide an ID card and an address so they can find you if you don’t return a book.”

Franklin said tax evasion concerns do not resonate in Nevada, partly because of antipathy toward the Internal Revenue Service.

“They are not evading state taxes. They are evading federal taxes, which is the IRS’s problem,” Franklin said, citing what he said was a common attitude but not his opinion.

A Nevada affiliate of the Panama law firm Mossack Fonseca, whose internal documents are at the center of the Panama Papers scandal, helped set up 1,024 entities in Nevade, and a high percentage of them are linked companies in the Seychelles, a small Indian Ocean island nation. An analysis of the Nevada registries reveals that three Seychelles companies — Plascot Ltd. (responsible for 182), Aldyne Ltd. (103), and Palma Corp. Ltd. (82) — manage more than a third of the entities set up by MF Corporate Services (Nevada), which abruptly closed in May after the Panama Papers stories were published.

Some of the companies incorporated in Nevada are enmeshed in global daisy chains that make it impossible to figure out who owns them.

McClatchy found one company, Balmont Holdings, Ltd., that was created on the small Pacific island nation of Niue, population 1,190. When the company reincorporated in Nevada in 2006, it issued shares to a company registered in the Seychelles. Records show that a list of shareholders was kept in Cyprus by a Moscow law firm.

Hundreds of other Nevada-registered companies have similarly convoluted ownership patterns and histories.

Such layering is common among those trying to put distance between themselves and their assets, and hinder any single country from following the money trail, experts said. The true owners, with the help of lawyers and accountants, move legal control from tax haven to tax haven.

Limited liability companies, or LLCs, are entities that minimize the responsibility for misconduct, negligence or debt of their partners.

Two months ago, Sen. Ron Wyden, D-Ore., the ranking minority member of the Senate Finance Committee, wrote to the secretaries of state of Nevada and Wyoming demanding to know what actions they were taking to monitor registered corporations.

Nevada Secretary of State Barbara Cegavske said in a June 2 response that her office does not have the authority to investigate illegal activities, such as money laundering or tax evasion, linked to Nevada-registered companies. She also said that in the past three years her office had not demanded ownership information from any company because no law enforcement agency had asked for it.

Some in Nevada say they don’t think such steps, either at the state or federal level, will hinder those intent on using companies or partnerships for fraud or other criminal acts.

“If you pass a law in the state that says you have to put the owner down, I don’t think the criminal is going to say, ‘Oh, I guess I’ll just put my name down,’ ” said Robert C. Kim, a Las Vegas-based lawyer with Ballard Spahr, a Philadelphia-based firm, who also heads the business section of the state bar association.

NO SOLUTION IN SIGHT

Nevada’s representatives in Congress differ on what should be done.

Titus called on Congress to ensure those who incorporate “are playing by the rules.”

“Nobody should have the ability to use a shell company for laundering money, evading taxes, or participating in any other criminal activities,” Titus said.

Amodei insisted that federal lawmakers have no role.

“Having 535 members of Congress, who are a long way away from most states, make these decisions doesn’t sound as efficient as letting local officials figure out what’s best for their state,” Amodei said. “And, if attorney generals and secretary of states can’t police this — that’s a shortcoming on their part.”

But in Nevada, several lawmakers said that is asking for the impossible. No state will risk tightening the rules unless others follow suit.

“Because we are all competing with each other, if one state steps out and does something, they lose their competitive edge,” said state Sen. Tick Segerblom.

“The only way you can address this issue is at the federal level, not at the state level,” said Coffin, the former state senator who is now a Las Vegas city councilman.

Lew sent a proposal to Congress in May that would establish a federal registry and require all corporate entities to list their owners. But no member of Congress has sponsored the proposed legislation. Other proposals have also not prospered this year.

Some experts said , however, that the issue could move forward in 2017.

“Ongoing threats from terrorist financing, money laundering, drug and human trafficking, corruption mean that, one way or another, the United States and the world have to tackle the issue of companies with hidden owners,” said Elise Bean, former staff director and chief counsel for a Senate investigations.