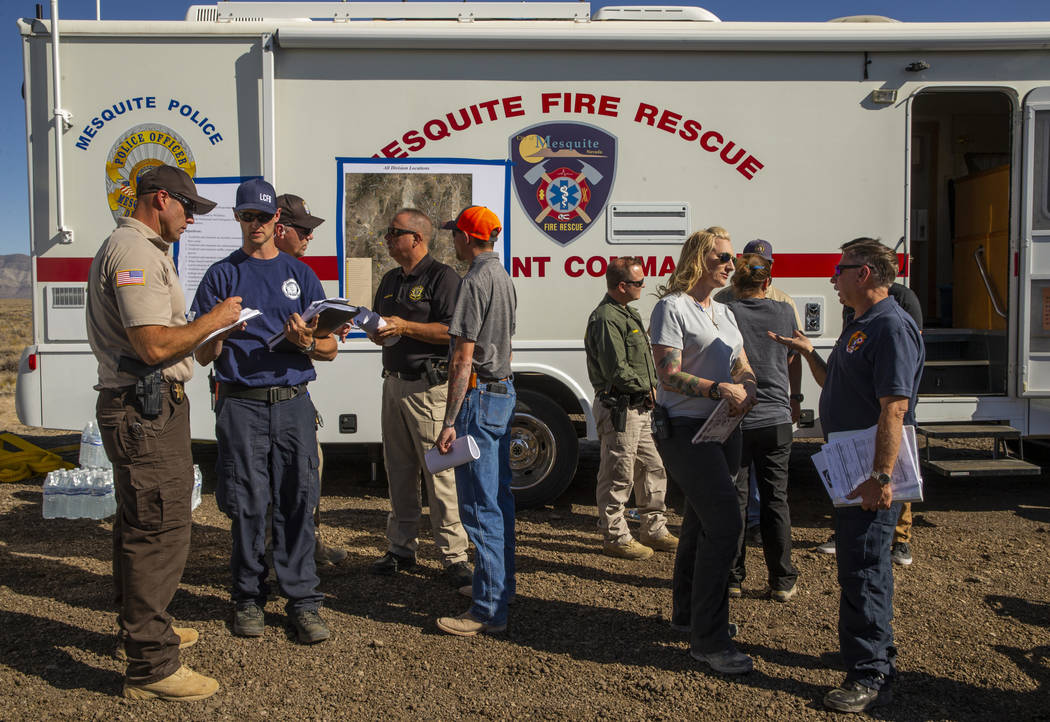 Emergency personnel confer while beginning to man the Incident Command Post in the Tikaboo Valley and two others as the Alienstock and Area 51 Basecamp festivals approach on Wednesday, Sept. 18, 2019, outside of Rachel, Nevada. (L.E. Baskow/Las Vegas Review-Journal) @Left_Eye_Images 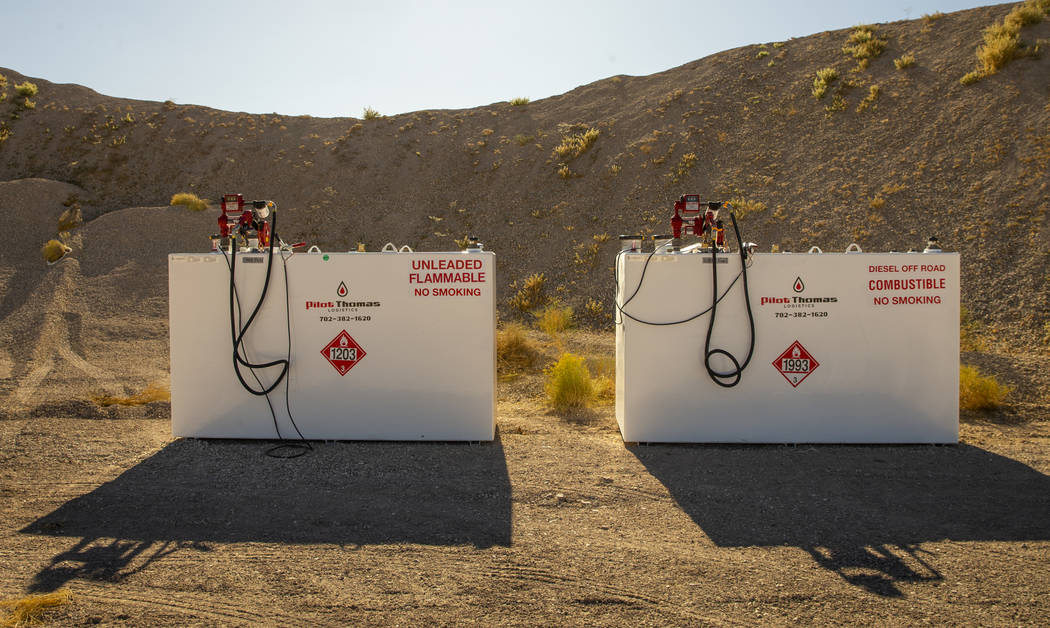 Gas tanks are staged for emergency vehicles at the Incident Command Post in the Tikaboo Valley and two others as the Alienstock and Area 51 Basecamp festivals approach on Wednesday, Sept. 18, 2019, outside of Rachel, Nevada. (L.E. Baskow/Las Vegas Review-Journal) @Left_Eye_Images 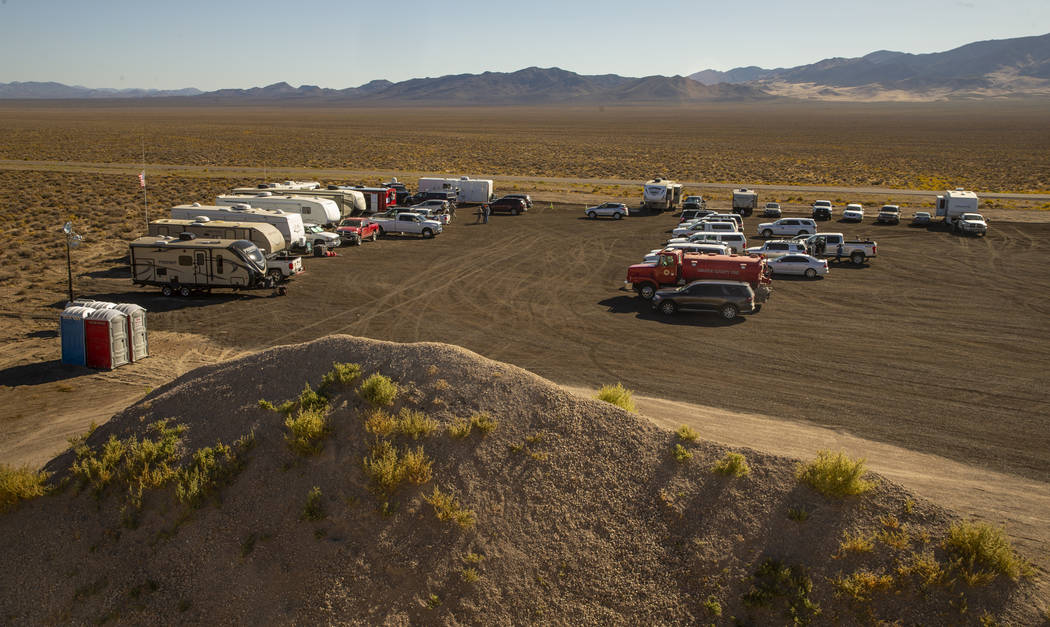 Emergency vehicles and personnel gather at the Incident Command Post in the Tikaboo Valley as the Alienstock and Area 51 Basecamp festivals approach on Wednesday, Sept. 18, 2019, outside of Rachel, Nevada. (L.E. Baskow/Las Vegas Review-Journal) @Left_Eye_Images 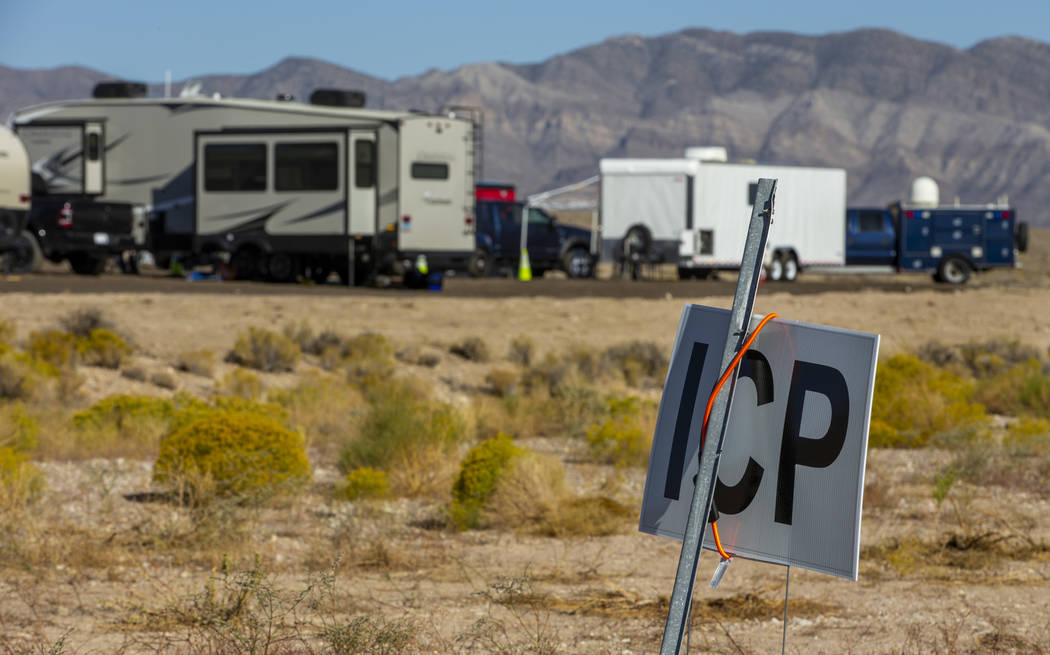 Emergency vehicles and personnel gather at the Incident Command Post in the Tikaboo Valley as the Alienstock and Area 51 Basecamp festivals approach on Wednesday, Sept. 18, 2019, outside of Rachel, Nevada. (L.E. Baskow/Las Vegas Review-Journal) @Left_Eye_Images

LINCOLN COUNTY— Over a dozen first responder agencies have set up shop in Lincoln County where thousands of people are expected to converge on a pair of sites for Storm Area 51 events.

The incident command post is the main first responder area of three being set up for the events — Alienstock taking place Thursday-Sunday in Rachel and Area 51 Basecamp occurring Friday and Saturday in Hiko. The command post is about 15 miles from Rachel and 25 miles from Hiko; smaller posts will be set up at each site.

The command post is made up of various agencies including Mesquite Police, the Bureau of Land Management and the Eureka County Sheriff with Lincoln County Emergency Manager Eric Holt in charge of running the post. Each agency has a dedicated trailer to house its people.

“Through that emergency declaration we’ve depleted our resources, so we reached out to other agencies to support us in different areas,” Holt said.

The group of about 100 is expected to balloon to 350 between the three sites. They’ll be evenly staffed at first and will fluctuate as demand warrants.

Lincoln County took $250,000 out of a land use act to pay for costs related to setting up the command posts and feeding the first responders for the two events, which grew out of a Facebook joke that drew interest from millions of social media users worldwide.

The county will apply to receive up to 50 percent of that money back from the state, and would look to recoup anything not covered there from Storm Area 51 creators and Facebook through legal action.

Lincoln County Commission Chairman Varlin Higbee is staying on site to be on hand in case any signatures are needed for any actions.

“When I signed on as commissioner this role came with it,” Higbee said. “This is part of the job and we’re going to be here for four days. We’ll have as much fun as we can and take care of business.”

With the amount of attendees unknown, as well as the type of issues, if any, that will arise, Holt said there wasn’t a specific area they’re too worried about except when the droves of people travel into the area.

“What we do know if we do have a big influx of people we’re going to have some traffic issues,” Holt said. “We’ll work to make sure those roads are as safe as possible and make sure the community and attendees know we have a presence out here.”