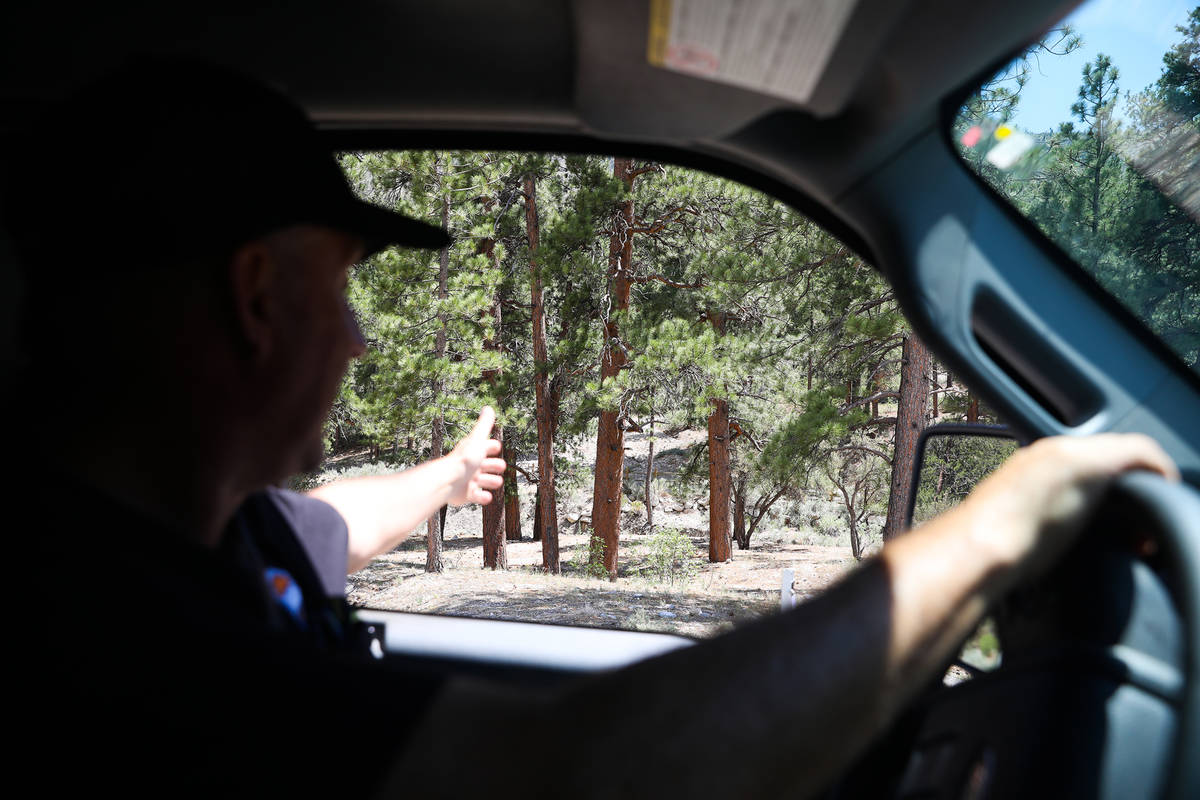 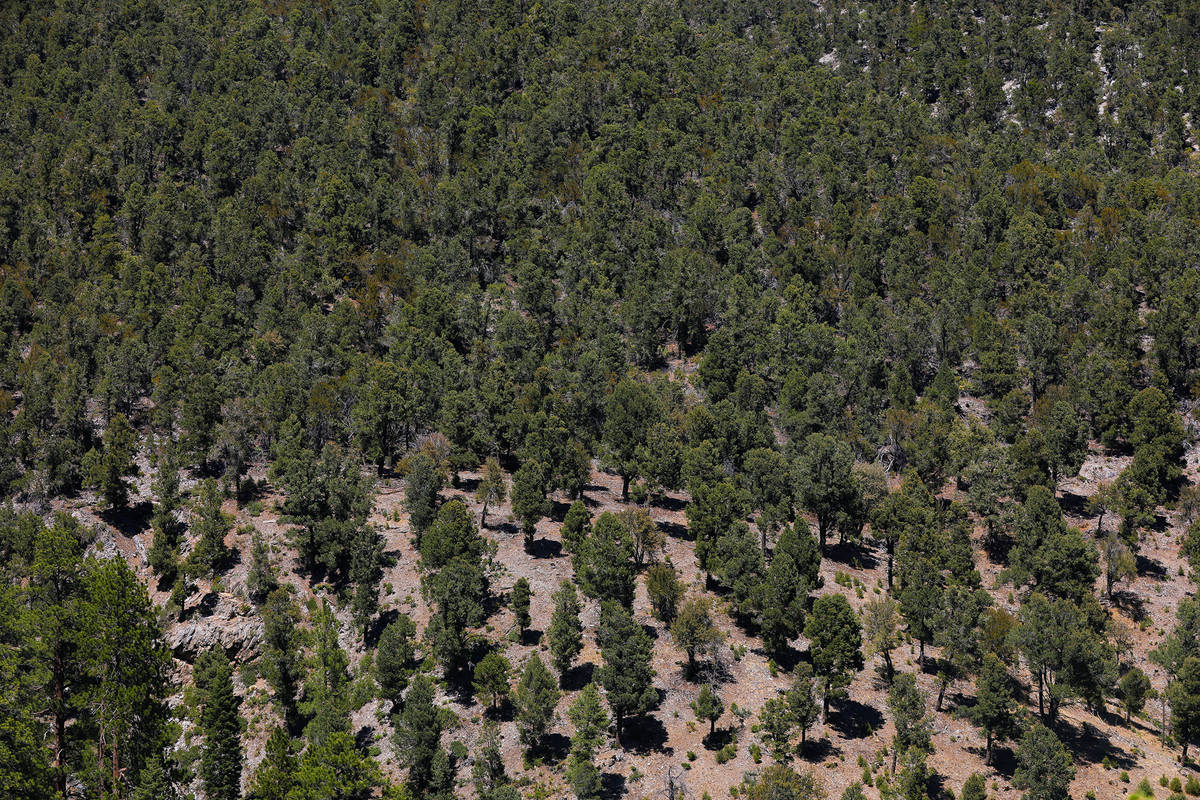 An example of fuel breaks — where firefighters cut down trees to leave space between them, effectively slowing a fire from spreading — in the bottom half of the photo, where the top half shows the forest as it naturally is, at Mount Charleston, Thursday, July 1, 2021. (Rachel Aston/Las Vegas Review-Journal) @rookie__rae 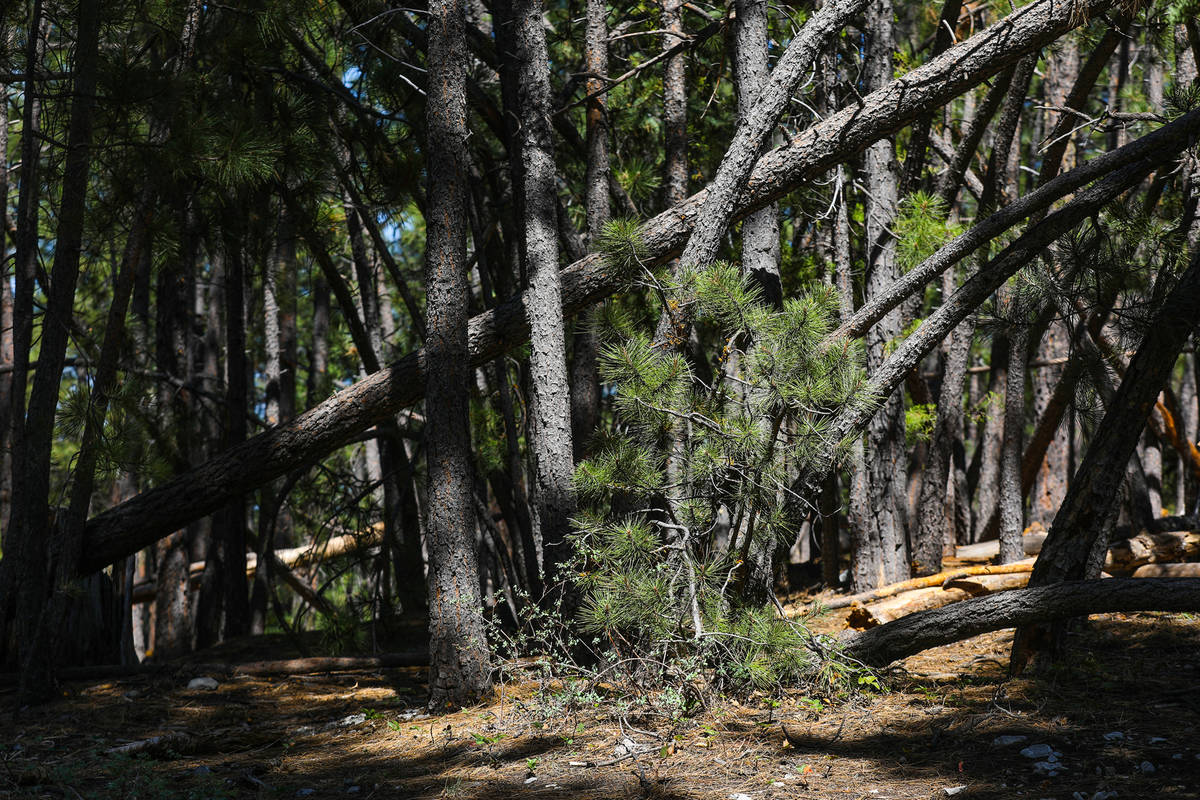 An example of an untouched area that could easily allow a fire to spread, with trees close together, at Mount Charleston Thursday, July 1, 2021. U.S. Forest officials in the area are gearing up for fire season as they face the driest conditions ever recorded. (Rachel Aston/Las Vegas Review-Journal) @rookie__rae 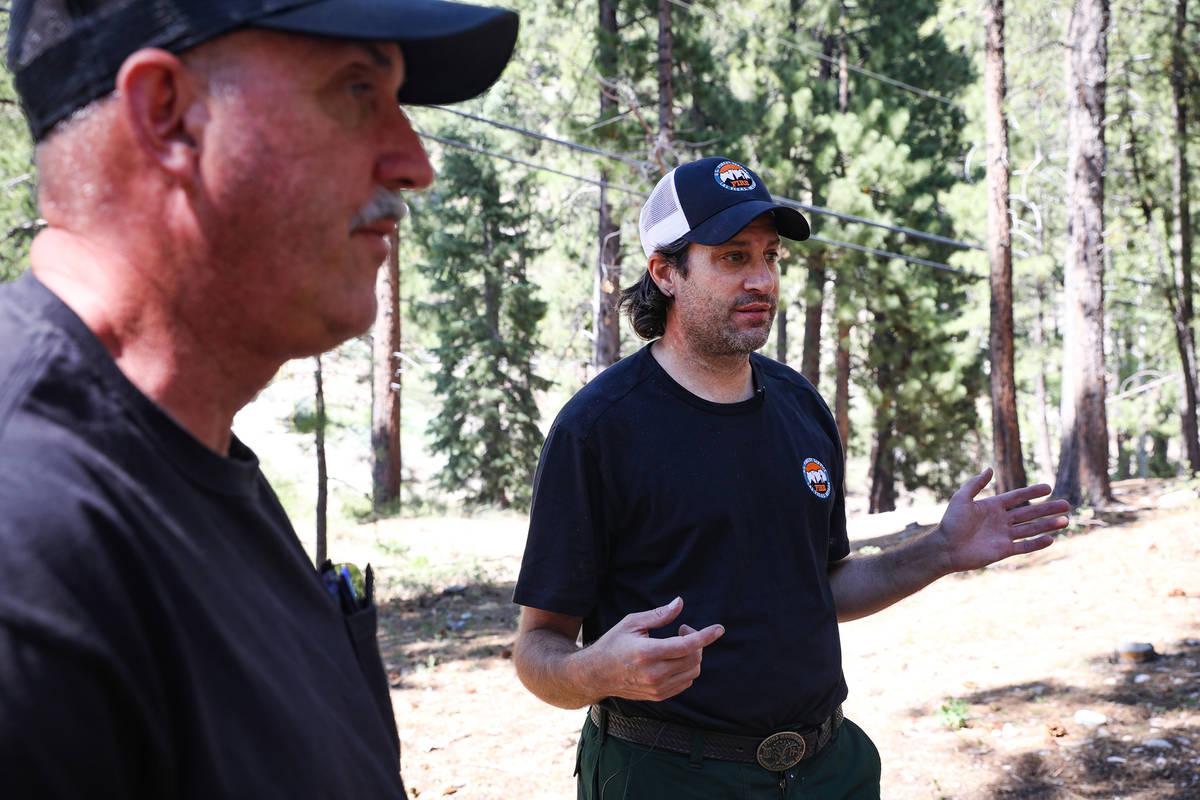 Josh Thalacker, a fuels specialist with the U.S. Forest Service, speaks at Mount Charleston, Thursday, July 1, 2021. U.S. Forest officials in the area are gearing up for fire season as they face the driest conditions ever recorded. They have worked for years to create fuel breaks and prepare for forest fires.In the foreground is Ray Johnson, Fire Prevention Officer for U.S Forest Service. (Rachel Aston/Las Vegas Review-Journal) @rookie__rae 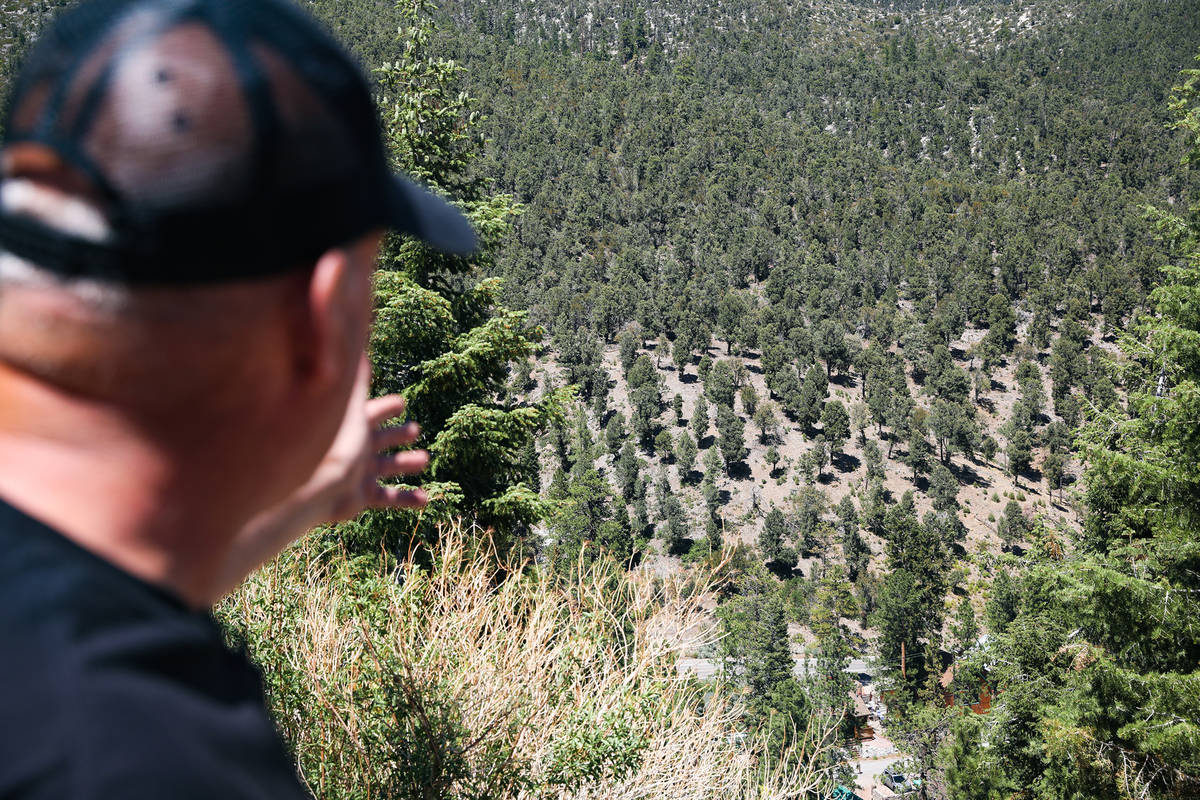 Ray Johnson, fire prevention officer with the U.S. Forest Service, shows an example of fuel breaks—where firefighters cut down trees to leave space between them, effectively slowing a fire from spreading— at Mount Charleston Thursday, July 1, 2021. U.S. Forest officials in the area are gearing up for fire season as they face the driest conditions ever recorded. Officials have worked for years to create fuel breaks and prepare for forest fires. (Rachel Aston/Las Vegas Review-Journal) @rookie__rae 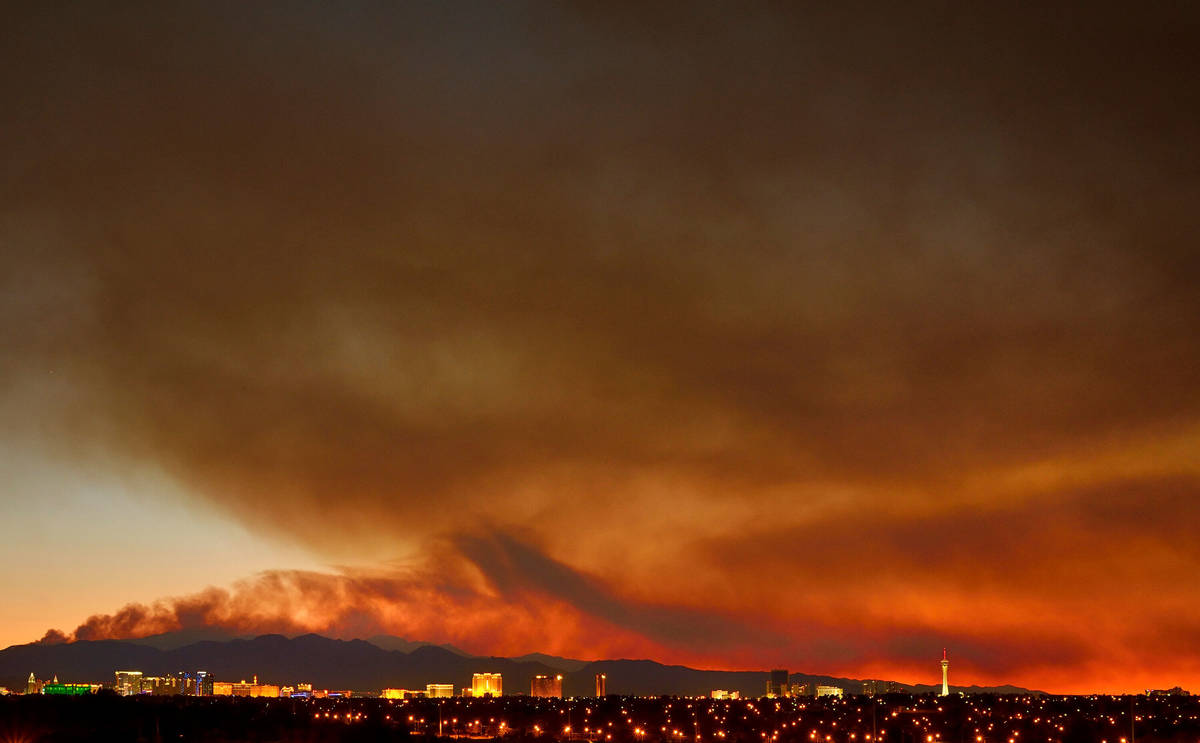 Smoke from the Carpenter 1 Fire rises over the Strip in Las Vegas on Tuesday, July 9, 2013. (Bill Hughes/Las Vegas Review-Journal) 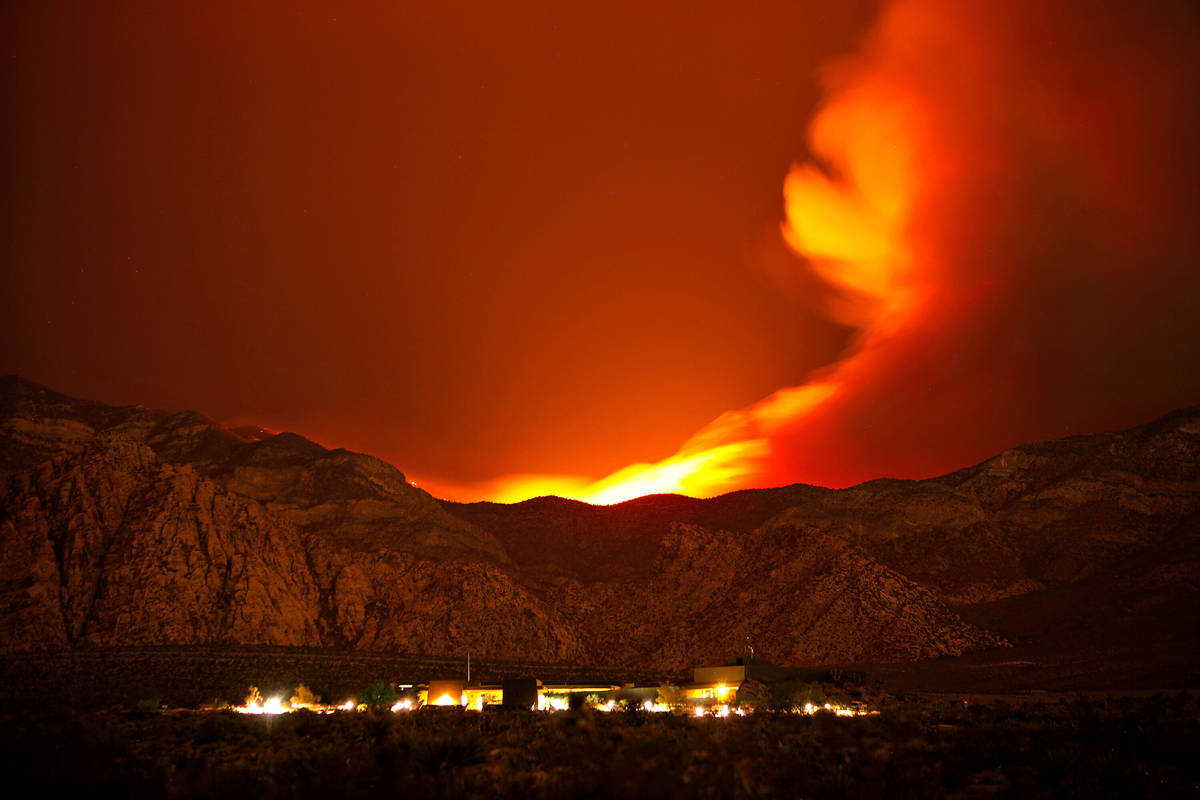 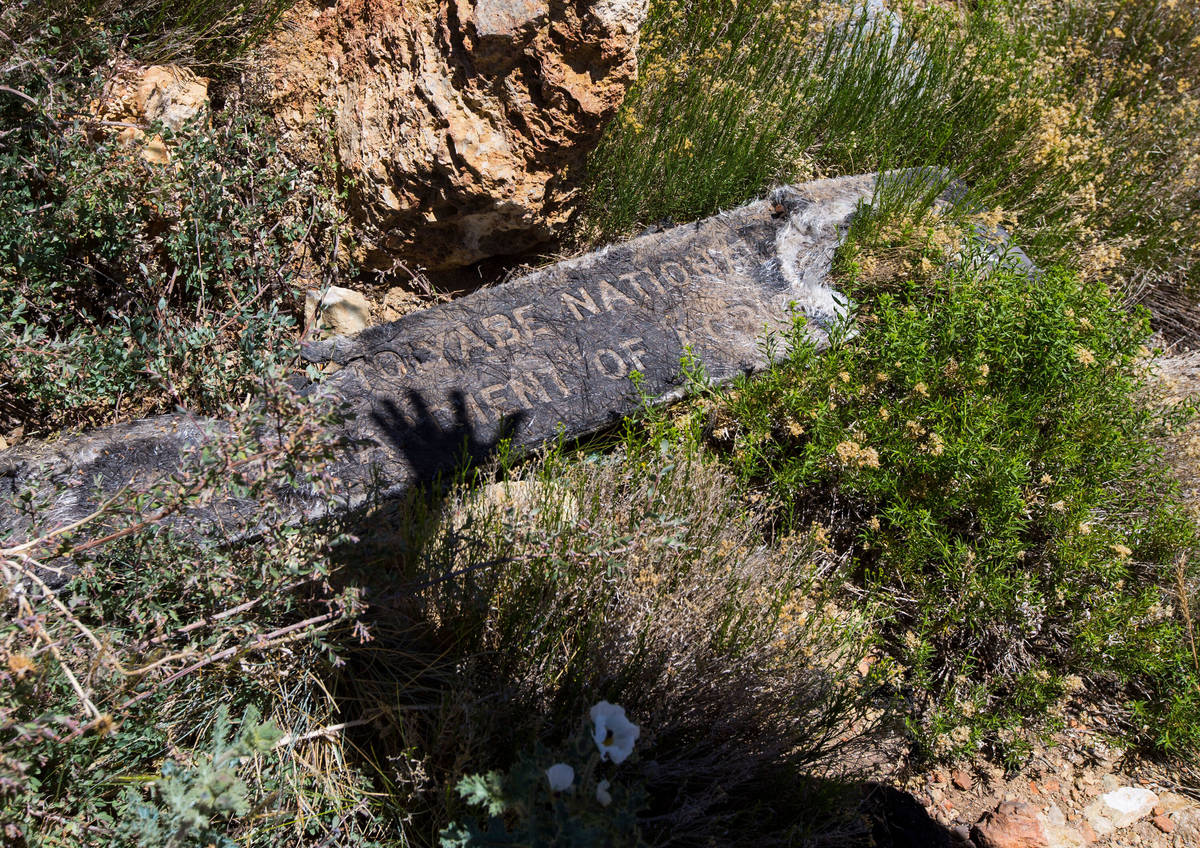 A sign that was burned in the Carpenter 1 fire lies in the ground near a trail for Griffith Peak in the Spring Mountains National Recreation Area on Friday, July 6, 2018. Chase Stevens Las Vegas Review-Journal @csstevensphoto 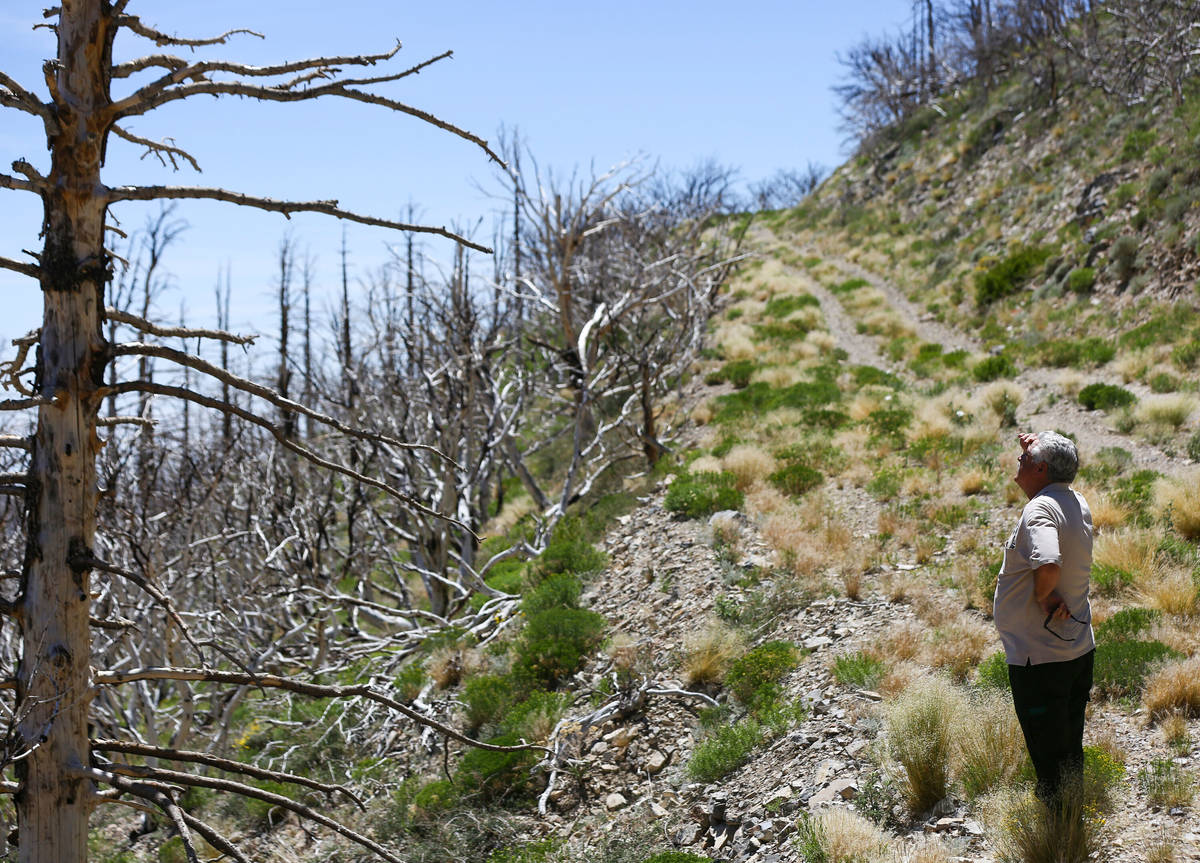 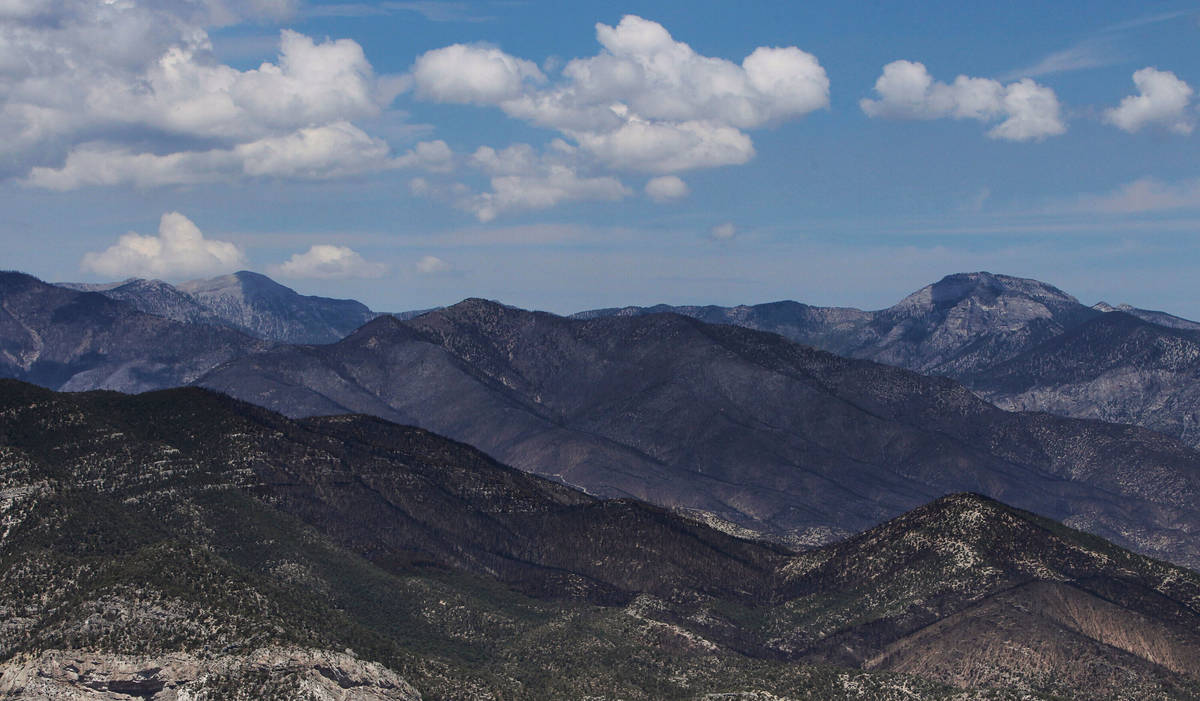 The aftermath of the Carpenter 1 fire is seen from the air above Mount Charleston northwest of Las Vegas on July 20, 2013. (Jason Bean/Las Vegas Review-Journal) 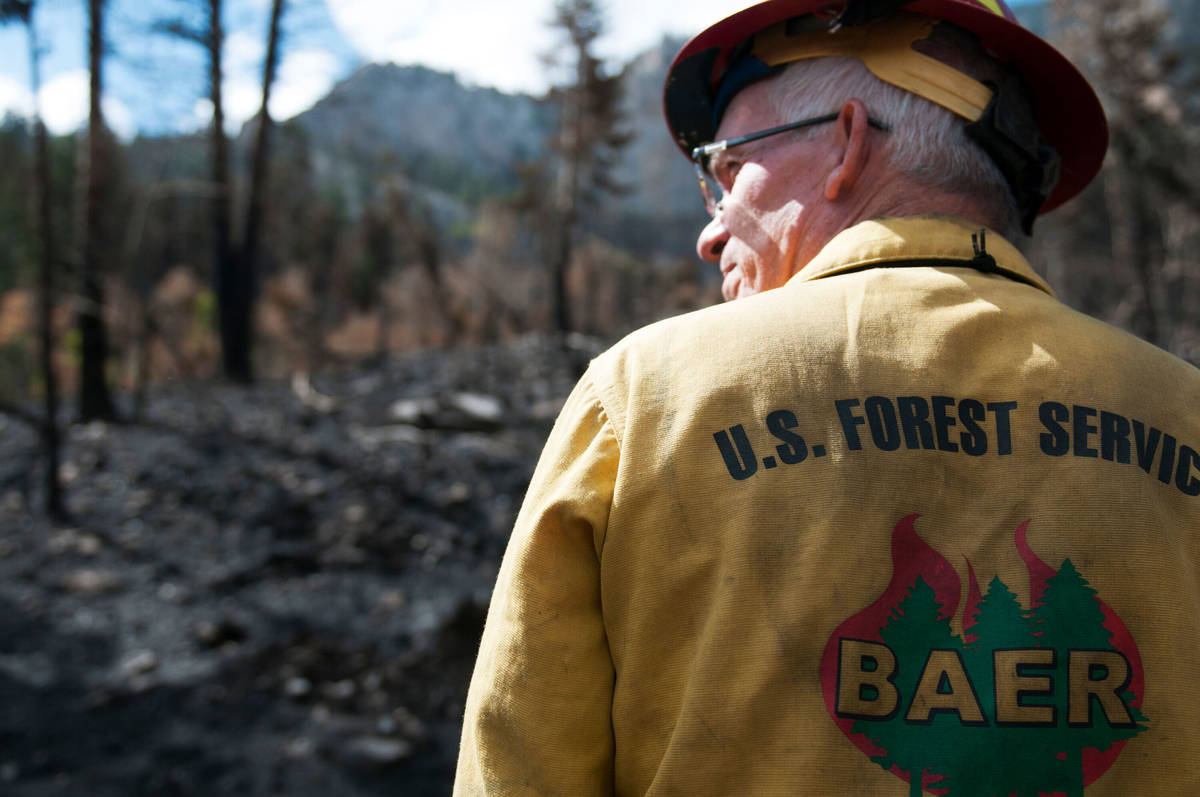 At the base of Mount Charleston, trees are evenly spaced out like a checkerboard stretching far left and right. At the top of the mountain, the edge of the checkerboard suddenly turns into a luscious, condensed forest.

It’s been eight years since the Carpenter 1 Fire roared to life on July 1, 2013, scorching almost 28,000 acres across the mountain range in the span of a month. By the time the fire was contained, it had churned through several different ecosystems, from high-elevation bristlecone pines to Joshua trees near the desert floor.

“The Carpenter fire came over that ridgeline and was coming down here to resolve these houses. It’s one way in, one way out. It was very dangerous. Luckily, we had these fuel breaks in. The fire came right up to it, and it got on the ground, and it did what it was supposed to,” said fuel break specialist Josh Thalacker with the U.S. Forest Service.

The Carpenter 1 fire could have been much worse if it wasn’t for years of pre-emptive measures employed by the U.S. Forest Service to purposefully clear out trees and brush, leaving behind sections of checkerboard-spaced trees known as shaded fuel breaks.

Without fuel breaks, Mount Charleston is susceptible to mega-fires California is experiencing while fire risk levels are rated “very high” in some areas of Southern Nevada.

Lightning- and human-caused fires together burned over a million acres in 2017 and 2018 in Nevada, according to the National Interagency Fire Center database. That number dropped to about 82,000 acres in 2019 because of a heavier monsoon season.

“So you have the invasive species, a huge drought, and then on top of that, we’re having very unusually early hot weather this year. Then you start adding in the wind, you get into these Red Flag Warnings, and now you’ve got a huge problem,” said John Asselin, spokesperson for the Bureau of Land Management.

Shaded fuel breaks are created where houses and infrastructure meet wildlands. Trees are cut down and thinned of low tree bark to separate canopies and prevent fire from traveling up the tree. Invasive species such as cheatgrass and red brome are dug out, leaving behind native and endangered grass surrounding the trees.

“Once they are separated, the trees become more healthy. Sunlight can come through, and now they’re not competing for the water either,” said Thalacker as he pointed to a beautifully sunlit fuel break. “We’re really drought-stressed. But if you look in our fuel breaks, we’re not as stressed.”

Just a few feet to the left of Thalacker stood a section of trees that were crowding one another. “Over here, these trees are really stressed. … It’s stressing out because they don’t have enough water.”

“Because they’re all fighting for the same water,” added Ray Johnson, a U.S. Forest Service ranger.

Desert trees and vegetation have evolved to withstand fire and periods of little to no moisture. However, grass species brought in by European settlers have invaded the Mojave desert, out-competing native grass and brush for water.

Native grasses such as sagebrush are seen in patches throughout the desert, but cheatgrass and red brome spread their seeds everywhere, covering entire regions.

Drought-stressed trees and brush compete for what little water the mountain gets as the moisture content in vegetation is declining.

“This is the driest it’s ever been,” Johnson said.

In 2018 and 2019, the moisture content of trees and brush in Mount Charleston measured over 100 percent as Nevada saw significant snow and rainfall.

Where there’s dry fuel, there’s potential for intense and severe wildfires. Drought adds to the risk.

The entire western United States is seeing less snow every year, and what’s there is melting earlier in the season. Over a decade ago, there would still be snow at the top of Mount Charleston slowly melting and traveling down the mountain to springs, increasing the moisture content of soil along the way. This year, U.S. Forest Service saw less than a third of its 20-year average snowpack.

With the lack of snowfall, the valley is already at a deficit because of the lack of rainfall last year, leading to the most extreme drought this region has seen in recent years.

“It’s gonna take a while to get out of it,” Thalacker said.

According to the monthly outlook from the National Interagency Fire Center, drought conditions expanded and intensified over the West with more than 90 percent of the region now in drought. More than half of the West is in the highest two categories of drought: extreme or exceptional.

The goal is to continue to protect the 33 unique plants and animals only found in Mount Charleston while protecting residents from mega-fires.

Stephanie Castillo is a 2021 Mass Media reporting fellow through the American Association for the Advancement of Science. Email her at scastillo@reviewjournal.com.com or follow her on Twitter @PhutureDoctors.