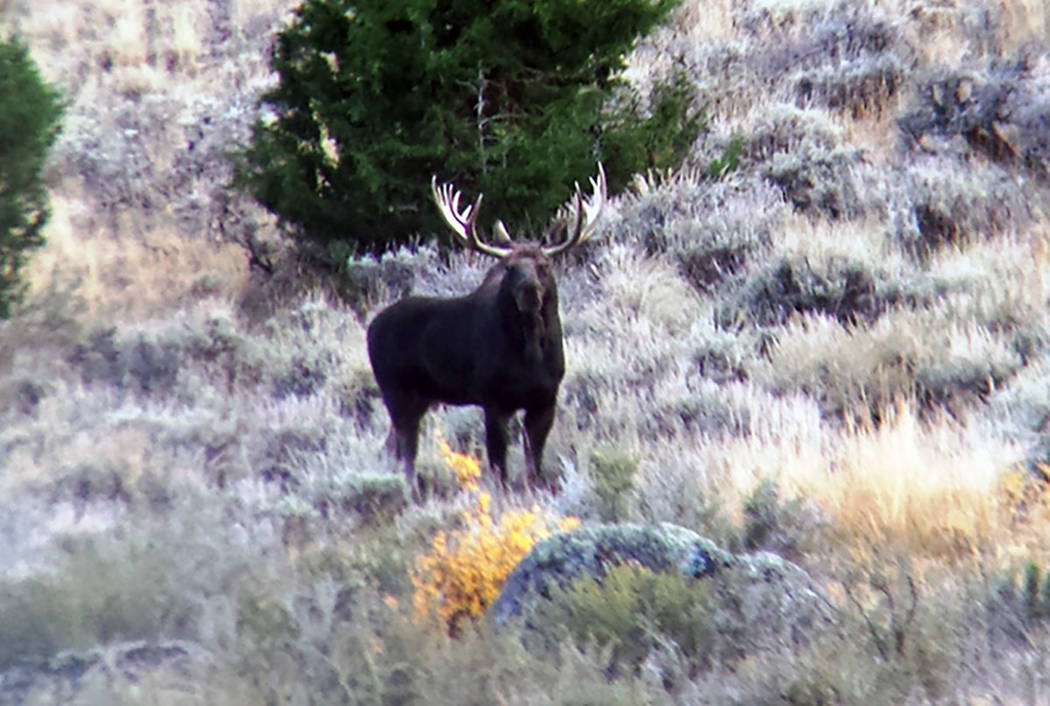 Moose sightings like this one are on the rise in Northern Nevada. (Nevada Department of Wildlife) 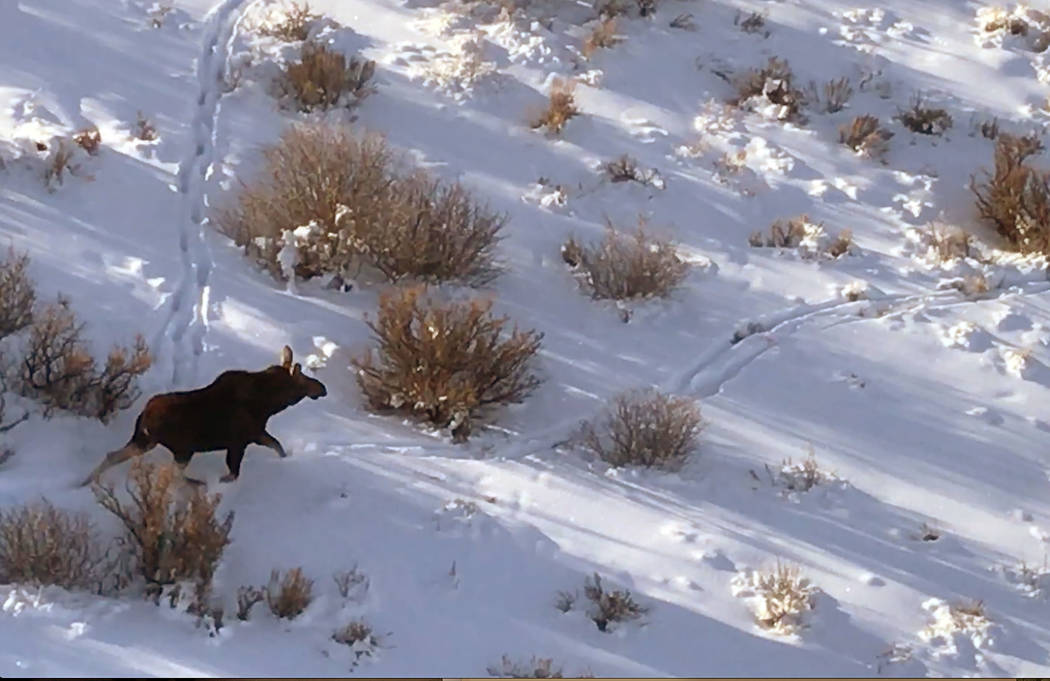 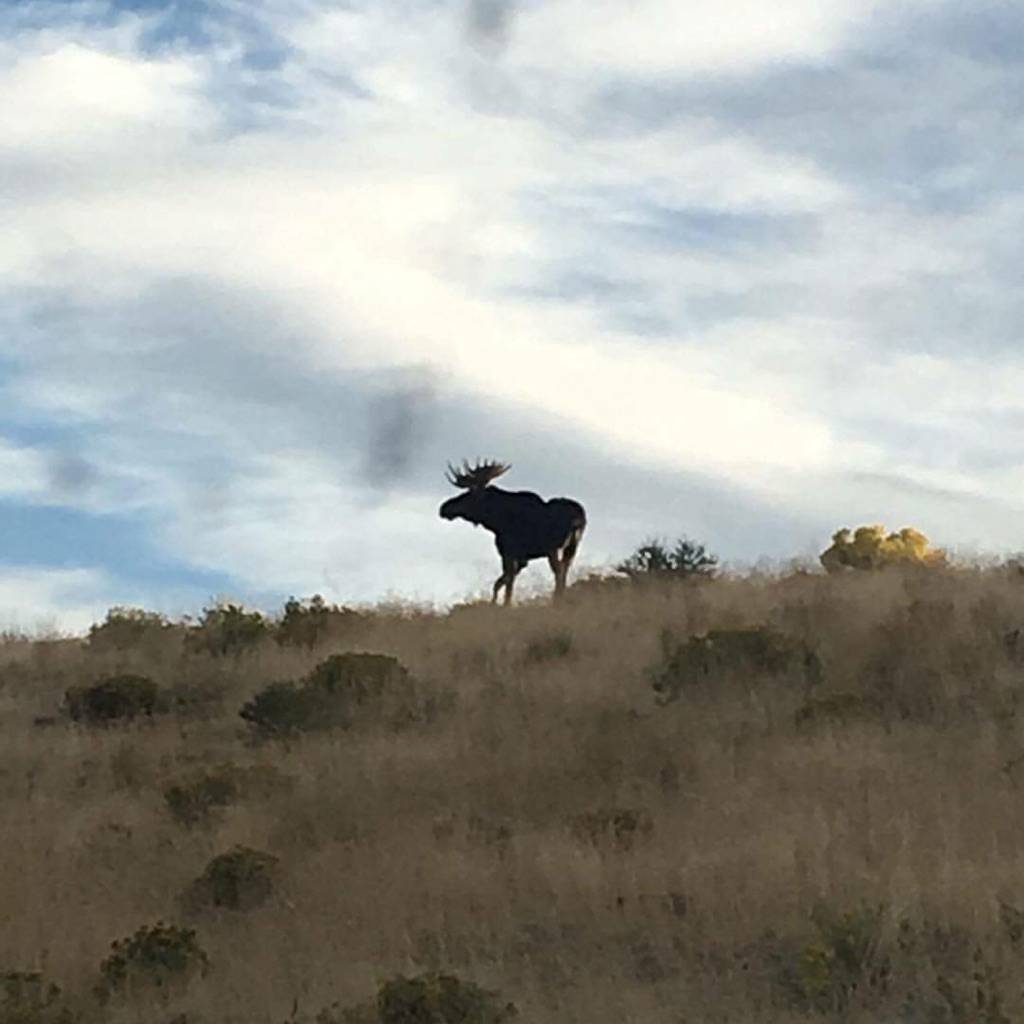 A bull moose roams the backcountry of Northern Nevada in 2016. Nevada Department of Wildlife 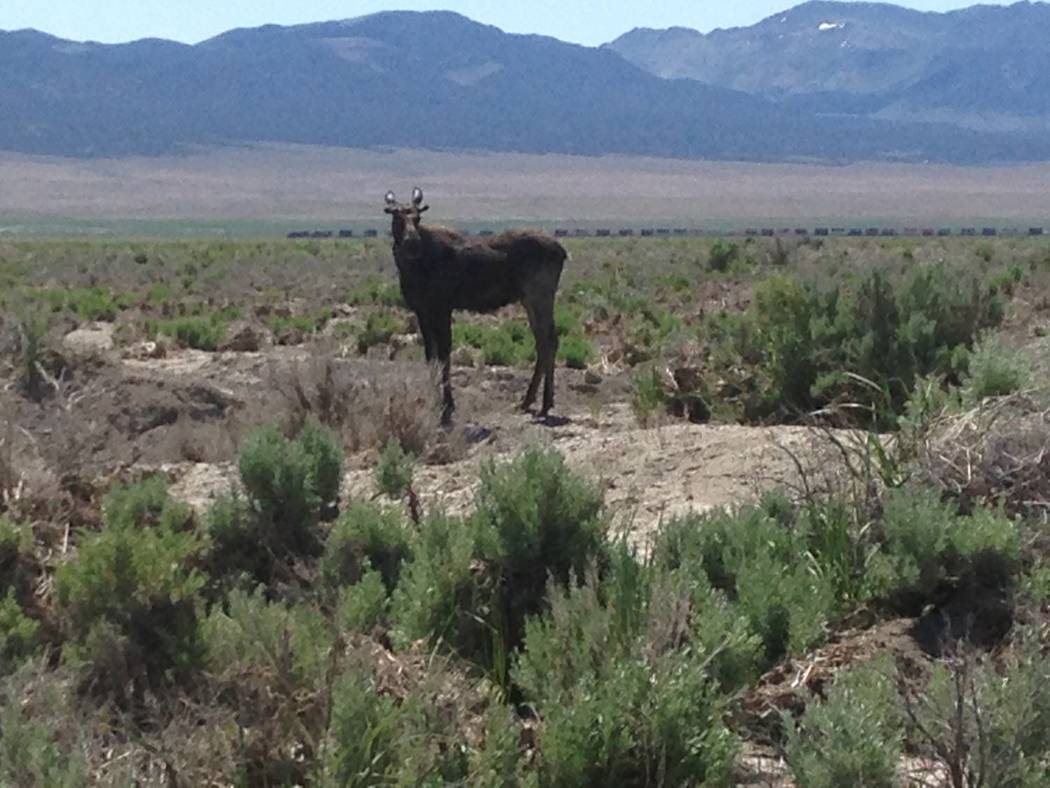 A moose looks out of place in the sage brush sea of Nevada, but wildlife officials say their numbers appear to be increasing. Nevada Department of Wildlife 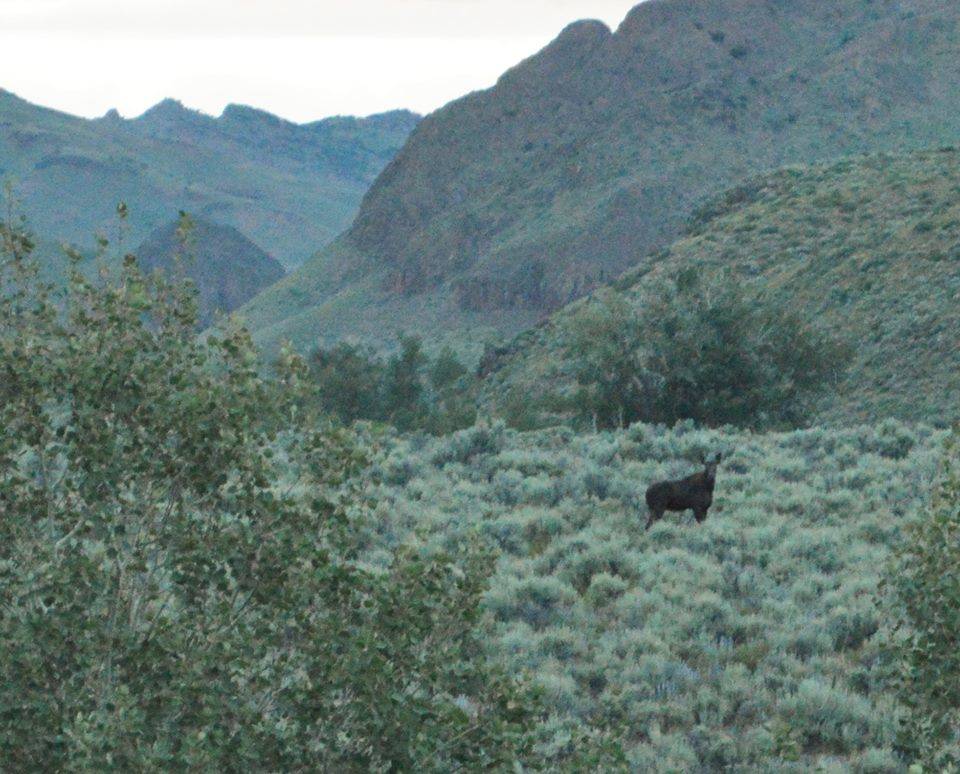 A moose browses near the Marys River in Elko County. Nevada Department of Wildlife 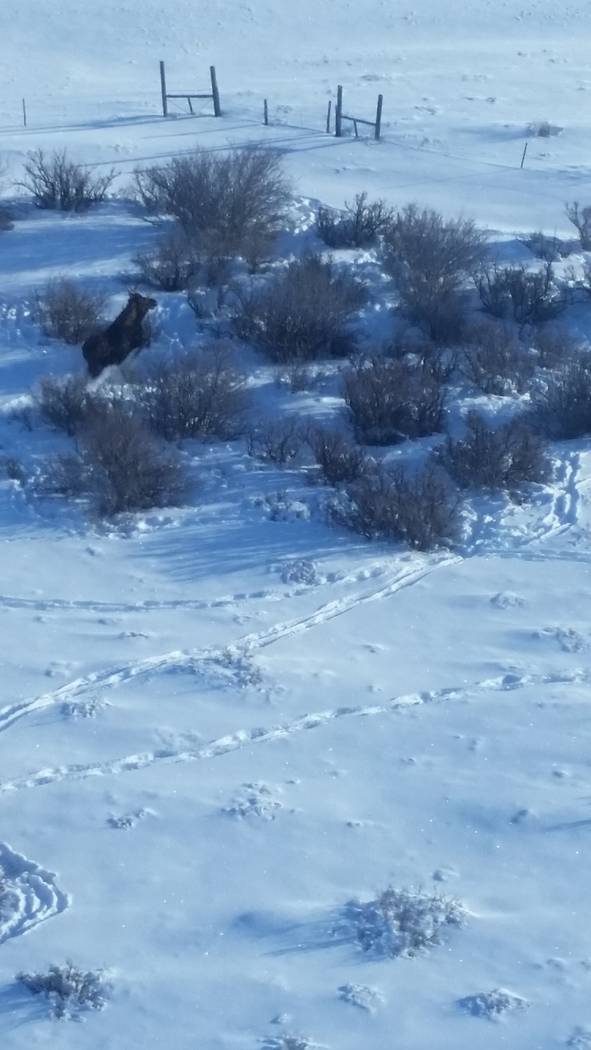 A moose walks through the snow in Northern Nevada early this year. Nevada Department of Wildlife 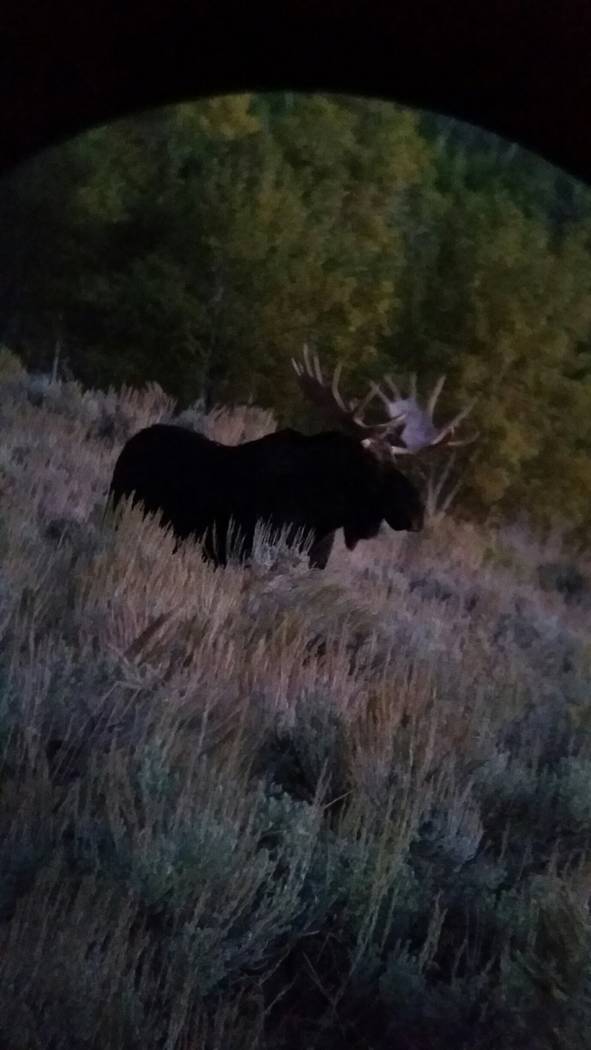 A bull moose photographed in Nevada in 2016. Nevada Department of Wildlife 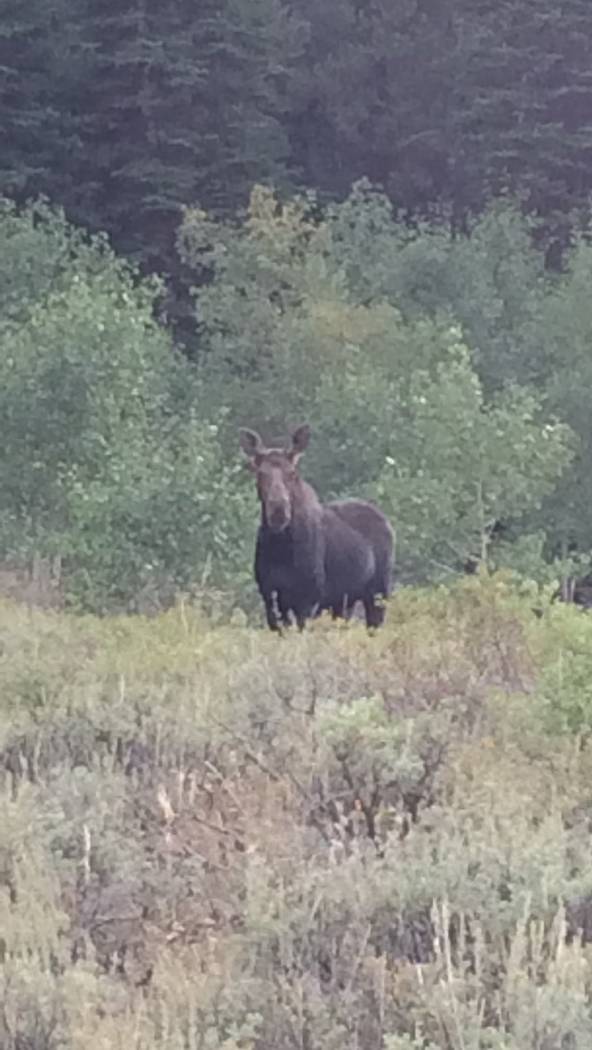 Moose are becoming an increasingly common site in northern Elko and Humboldt counties, where state wildlife officials say a resident population seems to be taking hold. Nevada Department of Wildlife 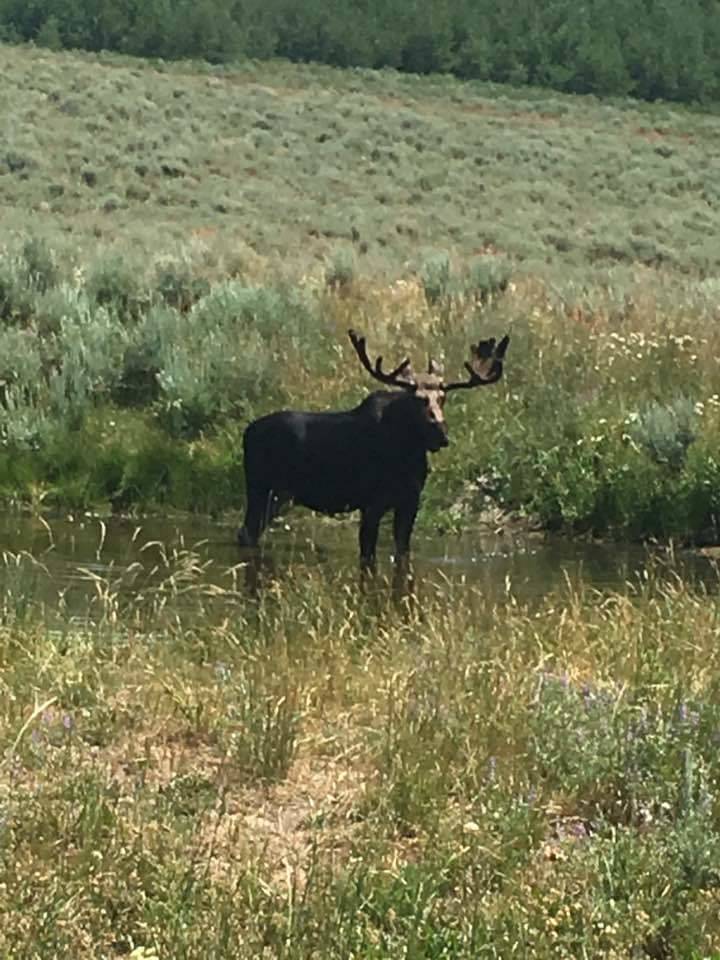 A bull moose stands in the water in Northern Nevada. Nevada Department of Wildlife

The plural of moose is moose, and plural is what these animals have become in the northern reaches of Nevada.

The Silver State now appears to be home to a resident population of moose, which have been sighted and photographed with increasing regularity in northern Elko and Humboldt counties.

Until about a decade ago, the only moose seen in Nevada were individual animals that wandered in from Idaho, typically young bulls looking for love.

In recent years, though, moose are being seen five to eight at a time — cows, calves and bulls, all engaged in behavior that suggests they live in Nevada full time.

Joe Doucette, Elko-based spokesman for the Nevada Department of Wildlife, said someone recently snapped a picture of a bull mating with a cow, though you won’t see smut like that in a family newspaper like this one.

There are enough moose around these days to prompt a warning from state wildlife officials: If you see one, keep your distance.

“Be aware that they are dangerous animals, especially the cows protecting their calves,” Doucette said. “And they’re much larger than any other deer-type animal in Nevada.”

Southern Nevada residents can relax. No moose has been sighted within 400 miles of Las Vegas.

To get a better idea of how widespread the state’s moose population might be, wildlife officials are asking people to report any encounters they might have.

“They’re very hard to document, because they like such thick, dense cover,” Doucette said.

Moose aren’t the only recent wildlife arrivals to Nevada.

Earlier this year, wildlife officials confirmed the presence of a wolf in the state for the first time since 1922. The male member of Northern California’s Shasta Pack was spotted near Fox Mountain, about 150 miles north of Reno, but it was unclear if it or any other wolves live in the state year-round.

Red foxes certainly do. Doucette said the sly predators from Utah have pushed into Eastern Nevada over the past 15 years or so, raising some conservation concerns because of their habit of preying on sage grouse and other ground-nesting birds.

Meanwhile, ringtail cats seem to be spreading north into the Great Basin from their native Mojave Desert. Historically, the raccoon-like animal was never seen any farther north than Ely, but Doucette said about three years ago a ringtail was discovered in the crawlspace of a home in Spring Creek, just outside Elko.

“Animals just don’t care, do they?” he said. “Political boundaries don’t mean a thing to animals.”

Most of the moose sightings so far have been reported by hunters, anglers and workers heading to remote mine sites in extreme Northern Nevada.

But a few individual animals have been spotted south of Interstate 80, at least 100 miles from the state’s northern border.

Doucette said those tend to be solitary young bulls searching for a mate in an otherwise mooseless landscape. “They don’t stay down there for long,” he said.

Biologists believe the influx into Nevada is being fueled by healthy, growing moose populations in southern Idaho and in the Raft River Mountains of northwestern Utah.

Twice since 2015, a hunter in Nevada has killed a female moose accidentally after mistaking it for an elk. In both cases, the hunters did the responsible thing by turning themselves in and surrendering the animals they harvested illegally, Doucette said. The two were cited, and the meat from their moose was turned over to charitable organizations that provide food to needy families.

In the 1990s, a Bureau of Land Management employee was knocked unconscious — though luckily not permanently injured — while trying to take a picture of a moose near the Elko County town of Tuscarora.

The last picture the guy took of the moose before it ran him over used to hang from the bulletin board at Department of Wildlife office in Elko, Doucette said with a chuckle.