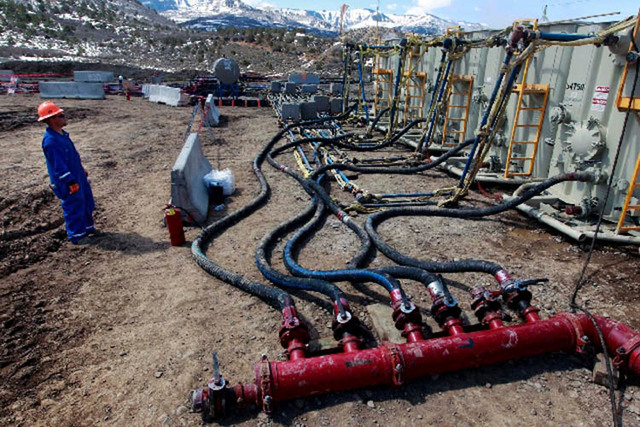 A worker helps monitor water pumping pressure and temperature at an Encana Oil & Gas (USA) Inc. hydraulic fracturing and extraction site, outside Rifle, in western Colorado. Hydraulic fracturing, or "fracking," is the practice of injecting water, sand and chemicals into source rock to crack it and create escape routes for oil and gas.

ELKO — A state panel has approved regulations guiding oil and gas exploration companies’ use of hydraulic fracturing, better known as fracking, in Nevada.

But supporters said the concerns are exaggerated, and they added that oil and gas development resulting from fracking will provide a boost to Nevada’s economy.

Kate Fay, a representative of Houston-based Noble Energy Inc., praised the regulations. Her company is searching for oil in northeastern Nevada.

“Noble Energy believes these regulations are tough but they’re workable, that they will help ensure that all oil and gas operators in Nevada follow best practices to protect public health and the environment,” she said, according to the Elko Daily Free Press.

But Bob Fulkerson of the Progressive Leadership Alliance of Nevada said the governor-appointed commission was stacked with members with ties to “extractive industries” including oil and mining. The process to review the regulations was rushed, he said, and did not allow adequate public input.

“We know we’re playing in a game that’s been rigged from the get-go,” he said. “It does appear the foxes have been put in charge of guarding the henhouse. Nevada is simply not ready for this.”

Some tribal members and farmers also voiced opposition to fracking, which involves extracting oil and gas from rock by injecting high-pressure mixtures of water, sand or gravel and chemicals.

Among other things, the new regulations require the monitoring of well casings for quality, the disclosure of all chemicals used, the notification of land owners and county commissioners, and the collection of multiple water samples for testing.