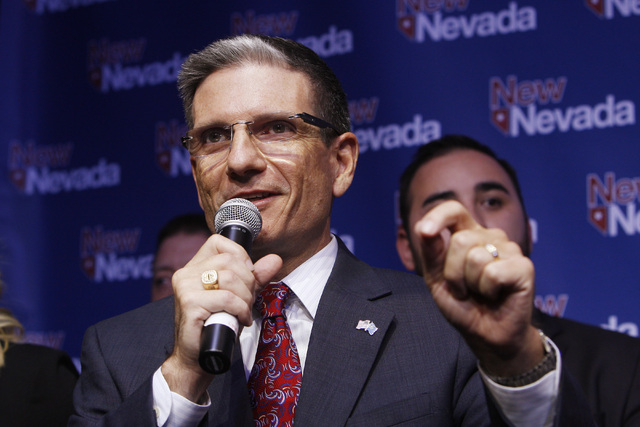 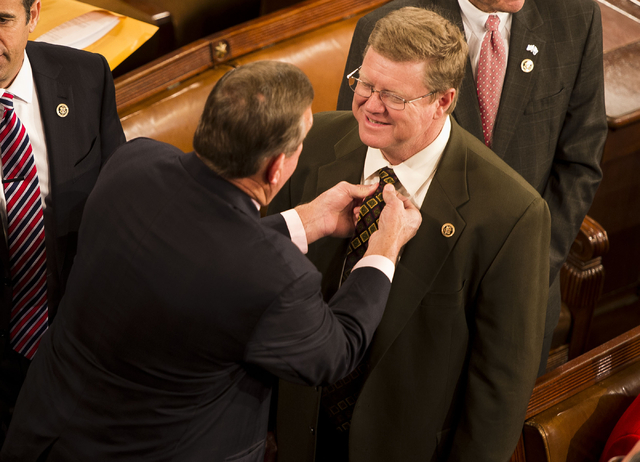 Rep. Cresent Hardy, R-Nev., adjusts the tie of fellow Nevada Republican Rep. Mark Amodei on the floor of the U.S. House as they await the start of the 114th Congress on Tuesday. (Special to Stephens Media)

WASHINGTON — Nevada Republicans in the House voted Wednesday to block President Barack Obama’s offer of legal status to millions of undocumented immigrants, but they stopped short of endorsing deportation for people already granted permits to remain in the country.

The votes of Reps. Joe Heck, Mark Amodei and Cresent Hardy were closely watched on an issue that has resonated with immigrant communities in Nevada and was an issue in campaigns last fall. As expected, Rep. Dina Titus, D-Nev., voted to support Obama’s immigration initiatives.

By 218-209, the Republican-controlled House voted to defund the Deferred Action for Childhood Arrivals program that has granted work permits to more than 580,000 so-called “DREAMers” — young people who were brought into the United States illegally as children.

By a broader, 237-190, lawmakers voted to block funding for Obama’s executive action in November that would expand DACA and also offer legal status to undocumented parents of U.S. citizens and lawful permanent residents. That action could affect an estimated 4 million people.

The amendments were added to a bill that would authorize spending for the Department of Homeland Security. Obama has said he would veto the bill if it arrived at the White House.

Hardy, Amodei and Heck voted to support DACA but voted against expanding it or offering similar treatment to other groups of immigrants as Obama has directed. The Nevadans were among 26 Republicans to back DACA.

For Hardy the votes were his first on a hot-button issue directly affecting constituents. He said in a statement his vote against Obama’s executive order from the fall was a vote against “executive overreach” and in favor of protecting the power of Congress to make the laws.

Hardy spokesman Scott Knuteson said in voting to support DACA, Hardy did not want to take away permit rights that thousands of people already were granted. About 11,000 Nevadans have obtained DACA permits.

Heck and Amodei offered similar views. “We cannot close the door on those individuals who have come forward as part of the DACA program and been given the opportunity to make a life for themselves in the only country they have ever known,” Heck said.

“I have been a strong advocate for the reform of legal immigration. I have also said repeatedly the president’s executive actions are not the answer,” Amodei said. His spokesman Brian Baluta said Amodei voted to leave DACA untouched because rolling it back would cause “confusion” and instability.

The focus of Congress should be on “keeping families together,” said Laura Martin, communications director of the Progressive Leadership Alliance of Nevada.

“If any member of Congress has a problem with these presidential orders they should do their job and pass a bill,” Martin said.