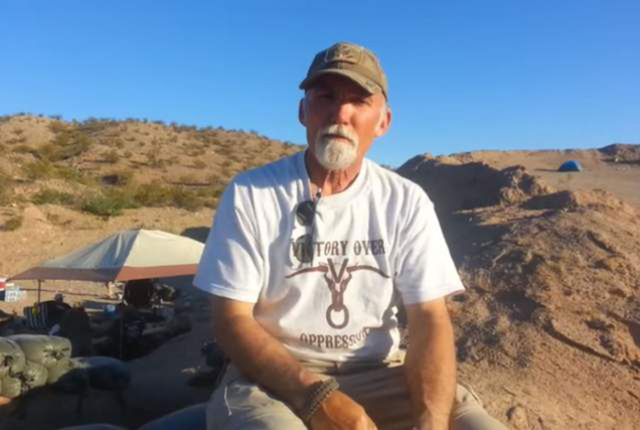 Jerry DeLemus of New Hamphsire speaks of his experiences in Bunkerville, Nevada in 2014. (Jason Patrick/YouTube)

A U.S. judge has approved the extradition of a New Hampshire man to Nevada, where he is to face trial on charges that he helped organize a high-profile armed standoff with federal agents at the ranch of Cliven Bundy in 2014.

The transfer of Jerry DeLemus, 61, to Nevada may proceed since no order was received from the U.S. District Court in Nevada staying the transfer, according to a ruling issued late Wednesday by U.S. District Judge Andrea Johnstone. No date has been set for the extradition.

DeLemus is a well-known conservative activist who co-chairs the New Hampshire Veterans for Trump coalition organized by the presidential campaign of Republican businessman Donald Trump. This month he was named an alternate delegate for Trump at the Republican nominating convention in July.

Eighteen other people indicted in the case include Bundy and two of his sons, who face charges of assault on a federal agent, threatening a law enforcement officer, conspiracy and firearms violations.

The standoff, which began when federal agents seized cattle at the ranch over unpaid grazing fees, came to symbolize opposition to federal management of public lands in the West.

Mark Sisti, DeLemus’ lawyer, said Thursday he would challenge the detention order once his client is transferred to Nevada, on the grounds that he poses no danger or flight risk.

“He has absolutely no history of violence,” Sisti said. “In fact, he is known in the community know as a mediator, a peacekeeper, someone you go to when you have a problem.”

U.S. prosecutors do not say DeLemus participated in the threatened assault on federal agents at the Bundy ranch April 12, 2014, but that afterward he served as a “gunman and mid-level organizer who joined in a conspiracy to commit an unprecedented and extremely violent and massive armed assault on federal law enforcement officers,” according to court papers.