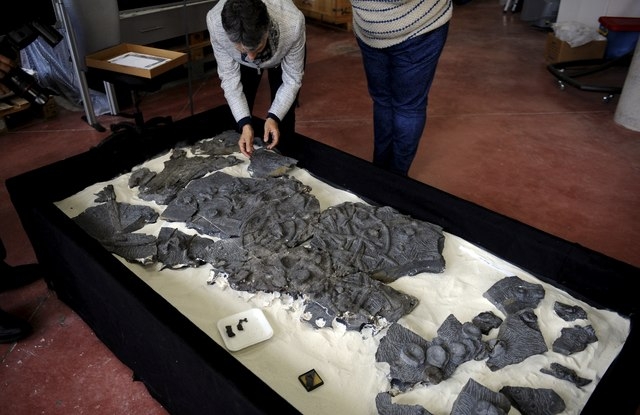 A fossil of a Ichthyosaur is seen at the Jurassic Museum of Asturia in Colunga, northern Spain, Nov. 6, 2015. Scientists on Tuesday released research which attributed the ichthyosaurs extinction 94 million years ago to the combination of global warming and their own failure to evolve swiftly enough. (Eloy Alonso/Reuters) 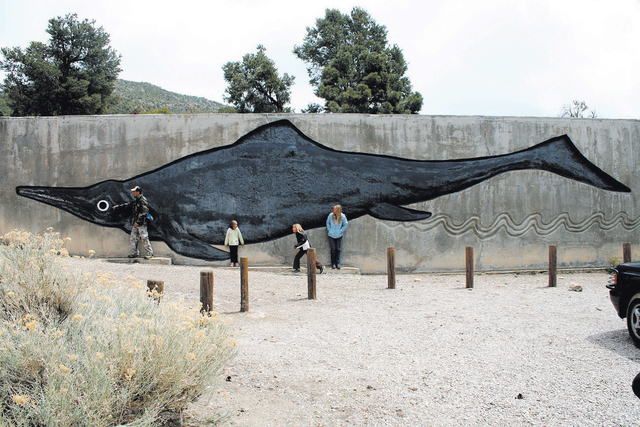 This wall, located in the fossil shelter parking area of Berlin-Ichthyosaur State Park, shows visitors what an Ichthyosaur might have looked like. (Las Vegas Review-Journal file)

The demise of the ichthyosaur, a highly successful group of dolphinlike marine reptiles that flourished in Earth’s seas for more than 150 million years, has been one of paleontology’s enduring mysteries.

Scientists on Tuesday announced new findings that suggest the massive sea creature died out quickly, most likely because of global warming and their own failure to evolve swiftly enough.

The research, the most comprehensive analysis to date of their disappearance, undercut previous notions that ichthyosaurs had been in decline for tens of millions of years and had been outcompeted by other predators such as the fearsome oceangoing lizards called mosasaurs that were just arriving on the scene.

The study showed that large mosasaurs appeared only after ichthyosaurs went extinct.

“We found ichthyosaurs were very diversified during the last part of their reign,” said paleontologist Valentin Fischer of Belgium’s University of Liege, noting that several species with various body shapes and ecological niches existed although ichthyosaur evolution had become relatively stagnant.

University of Oxford paleontologist Roger Benson added, “We find that the extinction was abrupt, not gradual.”

Some of the largest and most concentrated ichthyosaur fossils in North America can be found at in a remote state park in Nye County, about 350 miles northwest of Las Vegas.

Picture a dolphin the size of a tractor-trailer, chasing giant squid in a tropical ocean that covered Nevada more than 200 million years ago.

Thirty-seven of 37 of the creatures have been cataloged at Berlin-Ichthyosaur State Park, including nine that remain on display right where their fossils were dug up in the 1950s and 1960s.

Ichthyosaurs arose about 248 million years ago and became key players in marine ecosystems while dinosaurs ruled the land.

With a streamlined, dolphinlike body design, they were fast, efficient, air-breathing swimmers with muscular flippers and vertical tail flukes like sharks, not horizontal like whales and dolphins. They possessed unusually large eyes to spot prey in deep or turbid waters. They bore live babies rather than laying eggs.

Some measured less than 3 feet long. Others achieved immense size like Shonisaurus, which lived about 210 million years ago and reached about 70 feet.

“Shonisaurus was probably the biggest animal that had appeared on Earth up to that point in time,” Benson said.

The researchers thoroughly examined the ichthyosaur fossil record, reconstructing the group’s evolutionary diversity, and scrutinized evidence of climate change coinciding with their extinction.

Earth was warming rapidly, approaching the hottest times of the past 250 million years, triggering strong fluctuations in sea levels and temperatures. For a time, large swaths of seafloor became depleted in the oxygen necessary for animals to live.

The research was published in the journal Nature Communications.