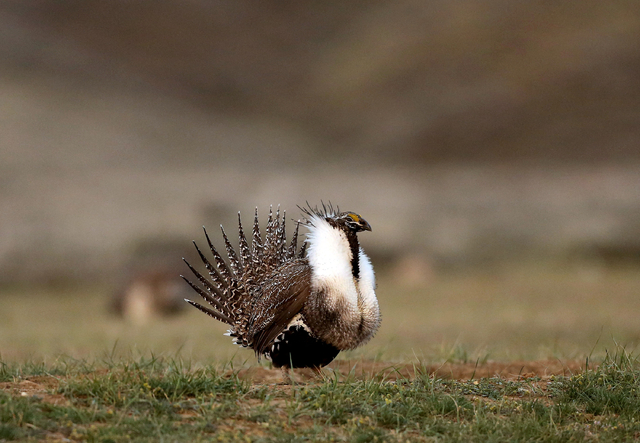 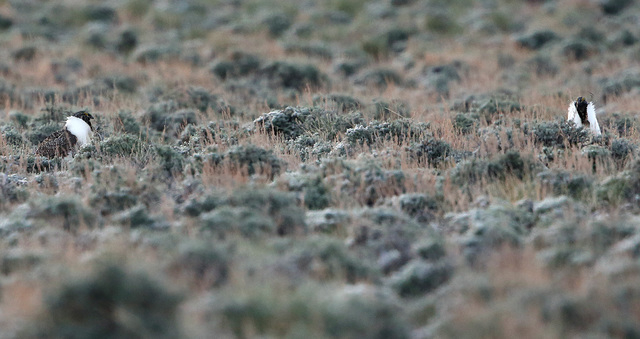 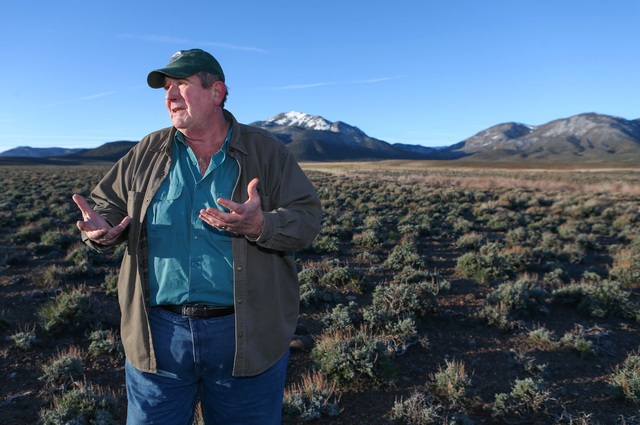 Tim Rubald with the Department of Conservation and Natural Resources talks about the declining numbers of bistate sage grouse near Smith Valley on Thursday, March 31, 2016. (Cathleen Allison/Las Vegas Review-Journal) 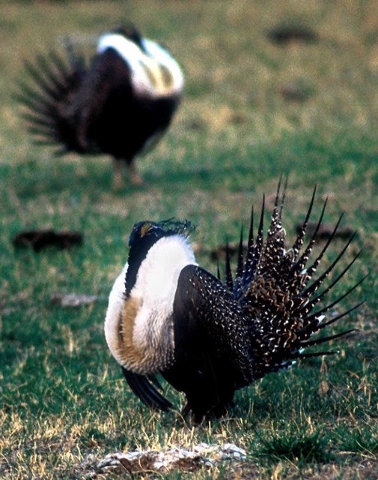 SMITH VALLEY — It had all the makings of the classic prank known as a snipe hunt.

Up at 3:30 in the morning to drive an hour-plus to a remote patch of sagebrush, purportedly to view male sage grouse performing their mating dance on patches of barren ground known as leks.

But it was no prank. As dawn came and the Smith Valley came into focus, there they were. Many yards out to be sure but no doubt about it. The 3-pound male grouse were bobbing and weaving to attract the attention of the smaller females during their mating season.

The strutting, which includes a unique sound caused by sacs in the necks of the males, continued for an hour or so before the birds took their brief flights into the sagebrush to continue their day eating and avoiding predators.

If you did not know they were out there, no casual passer-by would have any clue that an age-old ritual was underway as it is every morning this time of year for the bistate sage grouse, a game bird that would not normally attract much attention from anyone but a coyote or hawk.

Our guide to see the birds was Tim Rubald, conservation district program manger for the Nevada Conservation and Natural Resources Department.

“This is the start of the circle of life for the sage grouse,” he said. “They breed and then they nest. The chicks are hatched and grow from little bitty balls of fuzz to 2- to 3- pound birds in about three months. Then it starts all over again.”

The bird — related to the greater sage grouse found across much of Nevada and the West — has seen its numbers decline over the years. Some estimates put the loss at 50 percent from historic levels. Officials with several federal agencies, Nevada and California where the birds are found, along with ranchers and volunteers, are working to keep it from extinction.

The bistate sage grouse is a distinct population with a habitat from just south of Carson City in the Pine Nut Range to the White Mountains straddling the California-Nevada state line in Esmeralda County.

Loss of habitat and predators are two major reasons the birds are in decline.

Whether efforts to save the bird have so far been a success or failure depends on who you talk to.

A voluntary, coordinated effort by the federal government and the states, called the Sage Grouse Initiative, has been implemented to help increase the sage grouse populations. Nearly $20 million has been invested in conservation easements and habitat improvements to help them thrive.

Thad Heater, national coordinator of the Sage Grouse Initiative for the federal Natural Resources Conservation Service in Reno, said there is a strong commitment among many partners, from state and local government agencies to ranchers and volunteers who perform lek counts to improve the health of the bird populations.

This voluntary conservation partnership is responsible for significantly reducing long-term threats to the bistate sage grouse, the agency said. The Bi-State Action Plan, a conservation plan developed by partners in the Bi-State Local Area Working Group over the past 15 years, is secured with $45 million from various partners.

“We’re ‘all in’ to make a difference for this bird over the long term,” Heater said.

In 2013, the U.S. Fish and Wildlife Service proposed listing the bistate sage grouse “distinct population segment” as a threatened species under the Endangered Species Act. The agency cited multiple threats to the grouse and their habitats, including livestock grazing, the spread of invasive species, range fires, urban sprawl, mining, energy development, recreation and climate change.

The population has been defined as distinct because genetic analysis shows it has been separated from other greater sage grouse for thousands of years and the differences are significant, the agency said.

But in April 2015, the agency announced its decision to withdraw the proposed listing based on the success of voluntary conservation efforts to recover this species and its habitat.

The agency noted that the conservation effort has reduced long-term threats to the bird, a population estimated at 1,800to 7,400 inhabiting about 4.5 million acres on the California-Nevada border.

Gov. Brian Sandoval said last year the decision not to list the population showed that conservation strategies can be effective, allowing both the bird and economic development to coexist.

But a number of conservation groups disagree with the decision, and last month they filed a lawsuit in U.S. District Court in San Francisco saying the voluntary efforts have not reversed a decline in the numbers of the bird.

“This is an example of politics trumping science while the extinction of a unique population of sage grouse hangs in the balance,” said Ileene Anderson, senior scientist with the Center for Biological Diversity. “As we have seen for more than a decade, these voluntary measures are not enough; without the legal protections of the Endangered Species Act, the sage grouse in (the) Mono Basin have continued to decline, sliding toward extinction.”

Listing the bird would provide legal protections and require analysis of effects that are not required under the voluntary measures.

Before the Sage Grouse Initiative began in 2010, easements to protect the bird were rare. But in recent years, 7,300 acres of key habitat has been preserved in perpetual conservation easements with more in progress, federal officials announced last year. This is in addition to the 4,000-acre bistate easement completed in 2013 with the the Nature Conservancy.

Habitat has also been restored. Nearly 4,000 acres of sagebrush-steppe have been improved by selective removal of encroaching pinyon and juniper trees, which provide a perch for birds that hunt the grouse. Another 1,620 acres were expected to be completed by the end of last year, bringing a total investment to $1.1 million.

Although the future of the bird remains a question mark, the sage grouse in the Smith Valley had more immediate objectives during the recent visit. The males strutted, trying to impress the females, and they would be back at it again the next day.