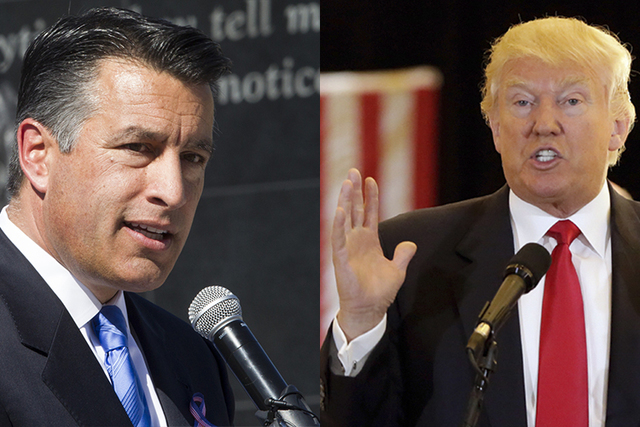 CARSON CITY — Gov. Brian Sandoval said Tuesday his vote for Donald Trump as the presumptive Republican presidential nominee is not absolute and voiced increasing concerns about the billionaire’s outspoken criticism against ethnic groups.

“I will only say that you can’t defend the indefensible,” Sandoval, Nevada’s first Hispanic governor, told the Las Vegas Review-Journal, adding his vote for Trump is “not for sure.”

In a statement issued later in the day, the two-term governor said, “I support the Republican Party and will continue to help elect strong Republican leaders in Nevada but at this time I cannot say I will definitely vote for Mr. Trump.”

Sandoval, a former federal judge who left the bench in 2009 to run for governor, said he was concerned with Trump’s rhetoric over U.S. District Judge Gonzalo Curiel, who is overseeing civil lawsuits against Trump University.

Curiel is presiding over two class-action lawsuits against Trump and Trump University filed by former students who claim they were subjected to high-pressure sales tactics and scammed out of tens of thousands of dollars for real estate classes marketed by the for-profit school.

The billionaire candidate sparked condemnation from Democrats and growing angst among Republicans when he said Curiel, who is of Mexican heritage, is biased because Trump wants to build a wall along the United States-Mexico border.

Curiel was born in Indiana to parents who came from Mexico.

Trump, in another national interview, later said he would have the same concerns about a judge of Muslim faith. Trump during his campaign has said the U.S. should temporarily ban Muslims from entering the country because of terrorism.

“Now, he’s talked about this judge and he’s also made a reference to another minority group that he would have the same concerns about, which obviously concerns me as well,” Sandoval said of the GOP’s presidential hopeful.

Sandoval has been a reluctant Trump backer. He did not endorse anyone early in the primary season and caucused in February for Florida Sen. Marco Rubio. After Rubio dropped out, he gave his late support to Ohio Gov. John Kasich.

But when Trump was the last man standing from the crowded GOP field, Sandoval said he would vote for the Republican nominee.

“Now that he has dropped out of the race, I plan to vote for the presumptive nominee although it is no secret that we do not agree on every issue,” Sandoval said at the time. “Elections are about making choices and the Democratic nominee is simply not an option.”

But the governor’s support has not been enthusiastic. He does not plan to attend the Republican National Convention next month in Cleveland.

Sandoval also was upset by Trump’s criticism of New Mexico Gov. Susana Martinez, a fellow Republican, during a May 24 campaign rally in Albuquerque.

“She is good friend and I think she’s done extraordinary things for the state of New Mexico,” Sandoval told the Review-Journal. “She’s a good leader; a great leader.”

During the rally, Trump said Martinez, who was not there, has to do a better job.

“She’s not doing the job,” Trump told supporters before suggesting he might run for governor of New Mexico.

“I”ll get this place going. She’s not doing the job. We’ve got to get her moving.”