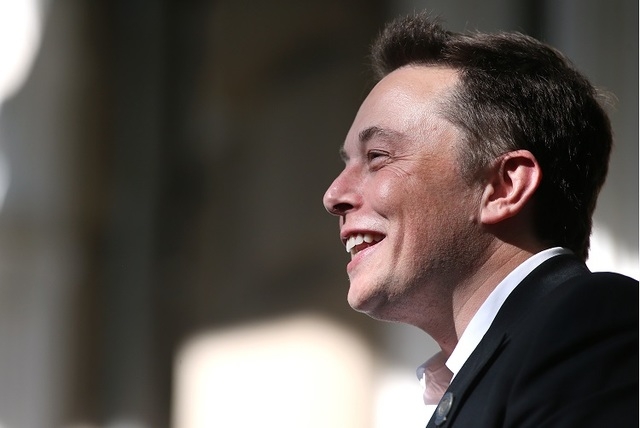 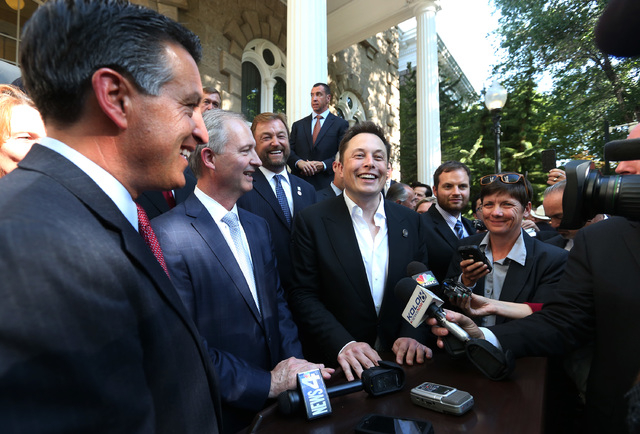 From left, Nevada Gov. Brian Sandoval, Steve Hill, executive director of the Governor's office of economic development, and Telsa Motors CEO Elon Musk answer questions following a news conference at the Capitol, in Carson City, Nev., on Thursday, Sept. 4, 2014. Nevada Gov. Brian Sandoval announced Thursday that Tesla Motors will build a massive battery factory in the state as long as legislators approve tax breaks and other incentives worth up to $1.3 billion over 20 years. (AP Photo/Cathleen Allison)

RENO — The massive Tesla battery factory being built in Northern Nevada will be a thirsty resident, with some preliminary estimates saying it will require the equivalent of nearly half of the groundwater rights allocated to its Tahoe-Reno Industrial Center neighborhood.

The project, the cherry atop Gov. Brian Sandoval’s economic development agenda to date, promises high-paying jobs and a diversification from a long-sagging gambling economy to one powered by high-tech manufacturing and technology.

But the $5 billion, 5 million-square-foot facility going up just down the road from Reno-Sparks in Storey County exemplifies the challenges of balancing economic growth with the availability of natural resources needed to sustain it.

State and local economic development officials say through smart use of technology and recycling the most precious resource — water — the region is up to the task.

Skeptics, while not opposed to the huge project per se, question whether there’s as much water as projected in the basin along the Truckee River to meet demands without harming the river and downstream users.

After months of negotiations and tense competition among five states, Tesla Motors, headed by billionaire Elon Musk, chose Northern Nevada as the site of the huge battery factory, a joint project with Panasonic Corp. of Japan. The plant, expected to employ upward of 6,000, will make lithium-ion batteries on a large scale, something Tesla says is needed to reduce the cost of its electric cars and make them more affordable and attractive to the auto-buying public.

Nevada awarded $1.3 billion in tax incentives to lure Tesla to the Silver State.

Tesla has not said how much water the huge plant will require, saying through a spokes­woman that it is “too early to say.” But Steve Hill, director of the Governor’s Office of Economic Development and Nevada’s point man on the Tesla deal, concedes water availability was an integral factor during talks.

“Water was a pretty significant part of the conversation,” Hill said. “They certainly wanted to make sure that water was not going to be a problem for them.”

The 165-square-mile Tahoe-Reno Industrial Center, the largest in North America, offers a half-acre foot of water for every acre a tenant develops, Hill said. Tesla, which is developing 1,000 acres, received 500 acre-feet of water as part of that provision.

But it’s not nearly enough for operations.

“The amount has not absolutely been determined, but it will probably be in the 2,000 to 2,500 acre-foot range by the time the facility reaches maturity. They’re going to need plus or minus another 2,000 acre-feet in order to operate,” Hill said, adding that the volume has been reduced as project engineers reconfigure design to maximize efficiency.

“Tesla certainly is very focused on the environment in general,” Hill said. “So they have worked really hard to bring down the amount of water that they would need, both from a business practice standpoint and in keeping in line with the values of the company.”

For comparison, the MGM Grand on the Strip used 397 million gallons of water, or 1,218 acre-feet in 2013, according to the Southern Nevada Water Authority.

An acre-foot is the amount of water needed to cover an acre of land 12 inches deep, or about 326,000 gallons. One acre-foot of water is enough to supply two average Las Vegas Valley households for a little more than one year.

The industrial center has 5,295 acre-feet of groundwater rights in the basin, according to the state engineer’s office. It also has rights to 4,480 acre-feet of recycled sewer water on the property and 220 acre-feet of surface rights from the Truckee River.

Lance Gilman, a Storey County commissioner and principal in the industrial center, which has about 170 tenants, dismissed water concerns. He said the industrial park has ample supplies, its own treatment plant and a sophisticated recycling system that greatly reduces demand for groundwater.

“The treated water … we pipe that up to a reservoir that’s 100 acres in size,” Gilman said. “We can hold 1,000 acre-feet of water in storage within that lake. We recycle everything we use out there.”

Well records show the industrial park pumped 900 acre-feet of water in 2012, and 500 acre-feet the following year, the state engineer’s office said. No water was pumped from the Truckee River.

Gilman said a report by the U.S. Geological Survey showed the location sits atop an underground aquifer containing tens of thousands of acre-feet of water, suggesting more groundwater could be had if necessary.

But some argue that the mere presence of water does not alone make that water ripe for siphoning. The important thing, they say, isn’t the size of the aquifer but perennial yield, defined as the maximum amount of groundwater that can be taken each year over the long term for beneficial use without depleting the reservoir.

“One would question whether that basin can actually safely provide what they think they can,” said Tom Myers, a hydro­logist and consultant for Great Basin Water Network.

He also discounted Gilman’s assertion that more groundwater was there for the taking.

“We have to allow groundwater mining to get to that, and that is something that Nevada, to its credit, does not allow,” Myers said.

Determining perennial yield is a complicated calculation, often based on best-guess estimates of annual recharge through precipitation and natural discharge of groundwater that makes its way into streams, springs and plants.

That point was acknowledged by Nevada’s state water engineer, Jason King, in a 2013 ruling that involved 18 water right applications in the watershed around the industrial site known as the Tracy Segment Hydrographic Basin. King noted that estimates from experts of mean recharge from precipitation varied widely, from 2,000 to 22,000 acre-feet annually. He pronounced the basin’s perennial yield from groundwater recharge at 11,500 acre-feet annually.

Myers remains skeptical, saying the state engineer’s amount of available water “may be overestimated because it doesn’t account for groundwater that is supposed to end up in the Truckee River.”

Of those, 12,000 acre-feet were sought by the industrial center but only 2,740 acre-feet were approved. In denying three other requests for a combined 3,200 acre-feet, King concluded that given existing groundwater rights of about 8,500 acre-feet, “there is insufficient water to satisfy these applications.”

His ruling also referenced testimony during applications hearings that water demand at Tahoe-Reno Industrial Park at build-out could range from 11,900 acre-feet to 45,000 acre-feet, depending on the types of companies that move there.

Gilman said the center will work with its current allocation of water.

“And then,” Gilman said, “as more science is developed, and we’re working on it constantly, there’ll be more water identified.”

“There’s not a water shortage,” he reiterated, adding the center pumped millions of gallons a day to handle Tesla’s grading project “and didn’t stress the system at all.”

“As we need more water, we’ll reach out,” he said.

But the industrial center is not interested in water from the Black Rock Desert, Gilman and Storey County Manager Pat Whitten said after an Idaho businessman with farming operations in Nevada’s Humboldt County filed two applications proposing to pump water from the desert 100 miles south to the industrial site.

Whitten said the county was not contacted beforehand about the proposal and the Storey County Commission voted unanimously to protest the applications. Gilman added it doesn’t make sense financially.

“The economics don’t pencil out,” Gilman said. “By the time you pump the water to get it to our market, it’s no longer attractive from a financial aspect.”

A more appealing alternative to bolster water for the industrial park is the Truckee Meadows Water Reclamation Facility, about 20 miles west in neighboring Washoe County.

The treatment plant is nearing capacity and struggling to meet environmental standards for nitrogen discharges into the Truckee River. The cost of building a pipeline to transfer treated effluent to the industrial park has been estimated at $35 million.

“What we plan to do is use that recycled water as the additional water for the Tesla manufacturing operation,” Hill said. “There’s more than enough excess water coming out of the treatment plant than Tesla would need.”

Such an arrangement, Hill said, provides water for Tesla, cleans up the river and helps the treatment facility in its discharge distribution efforts. He called it a “win-win” for everybody.

In the driest state in the nation, finding water for industrial use is a continuing challenge.

“It certainly comes up in a number of projects that we’re looking at,” Hill said. “So far we have not had a situation where a solution could not be found. And certainly companies are becoming more and more attuned to the fact that they need to be as efficient as they can with water.