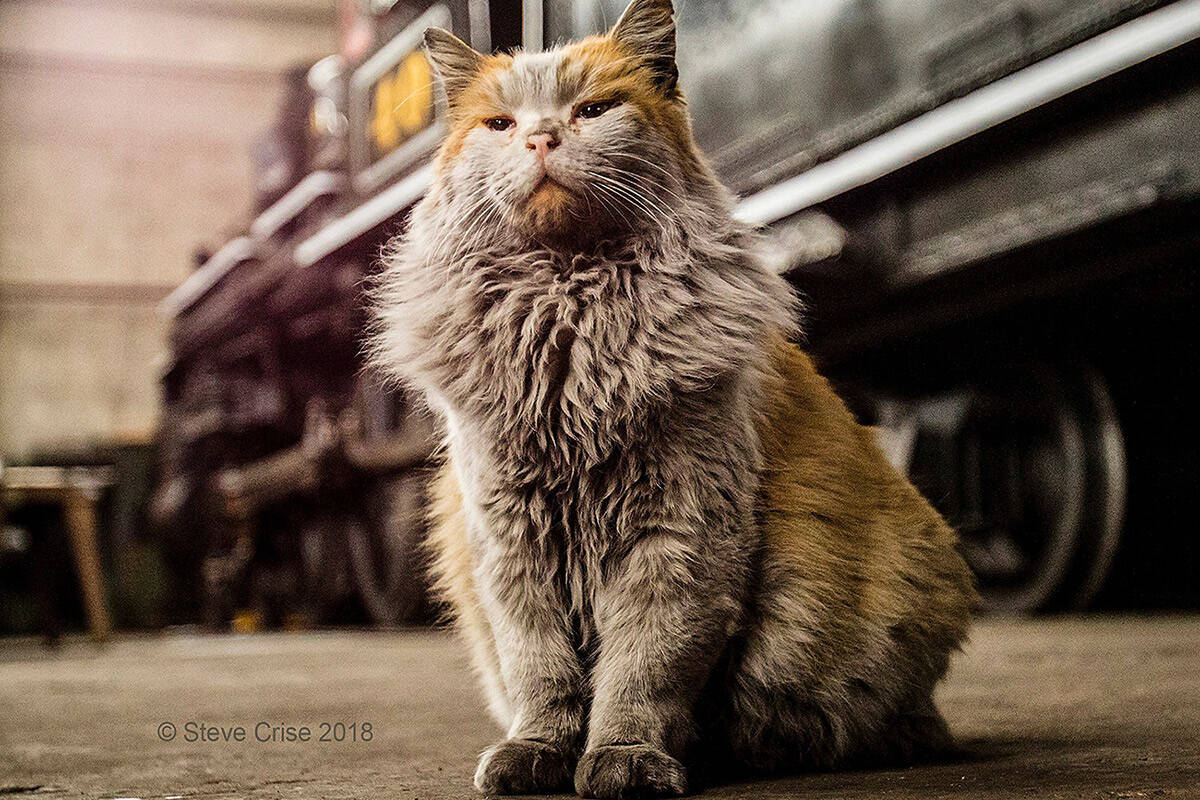 Dirt the cat, seen in 2018 at the Northern Nevada Railway. (Courtesy of Steve Crise and the Nevada Northern Railway)

No one would ever expect some small-town, semi-feral cat to become internet famous.

But at the Nevada Northern Railway in Ely, one orange and white cat, constantly coated in dirt and grease, did.

Dirt, shortened from Dirtbag after his notoriously filthy coat and hatred of baths, was a museum mascot who gained internet popularity after a photo of him went viral on Facebook.

Dirt died at the age of 15 on Wednesday from old age while surrounded by railroad staff. His legacy will be honored with two bronze statues at the museum.

Nevada Northern Railway President Mark Bassett said Dirt, who was born in the engine house of the railway, was the runt of the litter. Ten years later, Dirt’s life changed forever when the railroad’s former guest services manager, Eric Mencis, posted a photo of him on Facebook, making him a worldwide sensation.

And when Bassett says worldwide, he means it.

Dirt was even featured on an episode of “Ghost Adventures,” where he startled host Zac Bagans.

Bassett was baffled by those who came to rural Ely just to see the museum’s filthy furry friend. The town of 4,000 is a four-hour drive from Las Vegas.

But Dirt knew how to work a crowd.

“He became famous, and he knew he was famous,” he said.

Bassett said after guests ride the train at the museum, the museum does a tour of the machine shop and engine house. When Dirt would hear the words “This is the machine shop,” he knew it was his time to put on the charm.

“Here came Dirt. And when Dirt came, the tour stopped because everyone had to get their picture with Dirt,” he said.

Con Trumbull, a trainmaster at the railway, said despite his charisma around people, Dirt was never domesticated, and lived as a semi-feral cat right up to his last day.

“Yes, we took him to the vet, but we didn’t own him,” Trumbull said. “He stuck around on his own terms and left at any time. The doors are always open, and you can just walk away and never come back. So everybody just thinks he’s a pet. He wasn’t, and 15 years for a semi-feral shop chat — that’s pretty darn good.”

Dirt brought people to the museum who otherwise may have never come through the rural town. The additional revenue from Dirt’s merchandise including keychains, T-shirts, mugs and even his own coffee blend, helped boost the museum’s income.

Of all of the museum’s merchandise, the merchandise with Dirt sells the best, Bassett said.

When other railroads caught wind of how Dirt helped the museum, they began promoting their own shop cats, Trumbull said.

“One of our fellow museums back east put in their posts that Dirt was the inspiration for them to adopt a cat and make him their shop mascot,” Trumbull said. “Dirt started a trend, not just here, but nationwide where museums found a brand new tool to bring people to their historic programs, which is a pretty great legacy for him to have.”

Dirt’s obituary posted by the railway on Facebook, has collected thousands of reactions and comments, with many sharing their own photos of Dirt.

“He was an ambassador not just for the railroad but for rural Nevada, bringing people to rural Nevada and exploring their public lands and getting back into small town America,” Trumbull said.

Bassett said he’s planning a funeral service for Dirt that will be streamed online, if Ely’s bandwidth permits it.

The railway’s second rescue cat, an orange tabby named Dirt Jr., or DJ, will be around to greet new visitors, though Trumbull says no railway cat could ever live up to Dirt’s legacy.

Trumbull said he’s grateful that the railway staff got a private moment with Dirt before the world found out from his obit.

“Yes, the world loved him, but he was our cat. … He was part of the family, and we were able to (say goodbye) before the world came crashing back in.”