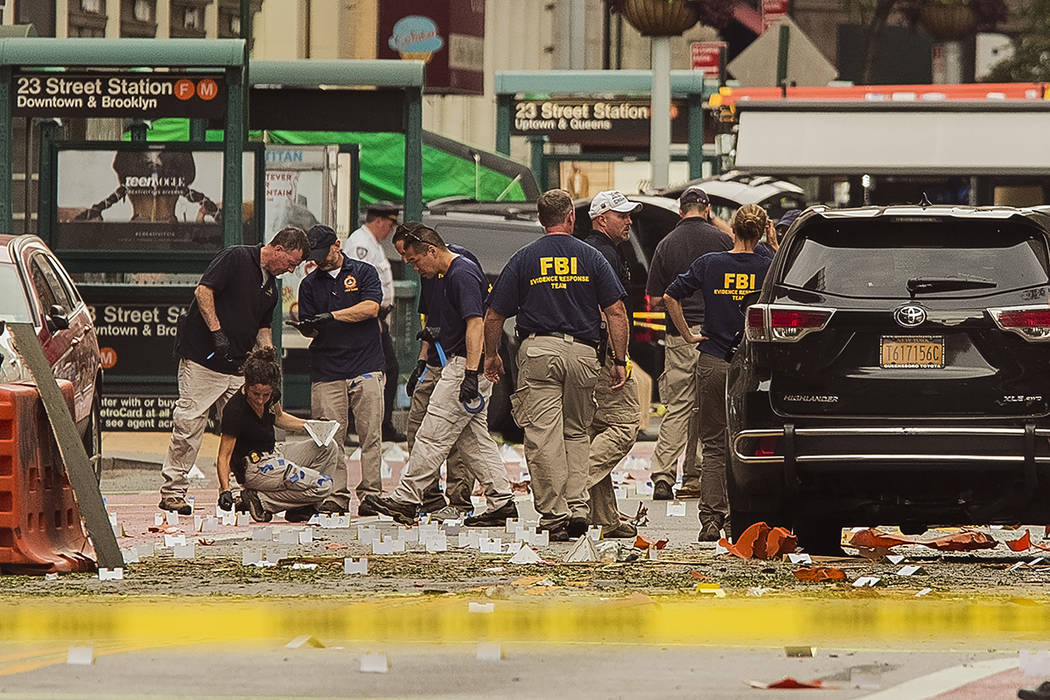 In this Sunday, Sept. 18, 2016 file photo, members of the Federal Bureau of Investigation (FBI) carry on investigations at the scene of an explosion on West 23rd Street and Sixth Avenue in Manhattan's Chelsea neighborhood, in New York. (AP Photo/Andres Kudacki, File)

An explosive compound like the one found in Las Vegas mass shooter Stephen Paddock’s car and home is believed to have been used last year in an alleged terrorist bombing in New York City.

Authorities say they recovered an undisclosed amount of the compound known as Tannerite from Paddock’s home in Mesquite and 50 pounds from his car parked at Mandalay Bay, where he used firearms to mow down concertgoers at the adjacent Route 91 Harvest festival on Sunday.

Police have not said why the 64-year-old Paddock possessed Tannerite, which is unregulated and legally used by marksmen to create targets that emit a small cloud of smoke when they are struck. Authorities also found ammonium nitrate, another ingredient that can be used to build bombs, in his vehicle at the site of the shooting.

The Bureau of Alcohol, Tobacco, Firearms and Explosives notes that products like Tannerite are binary, meaning they consist of two separate components that are inert when separated. “But when mixed, they are high explosives and should be treated with caution and in accordance with manufacturer’s instructions,” the agency noted in a 2015 safety advisory.

Tannerite apparently was used in a September 2016 bombing in New York City’s Chelsea neighborhood that injured 31 people. Various news accounts at the time quoted unidentified federal officials as saying that residue of the product was found at the scene.

Authorities later arrested Ahmed Rahami, an Afghan immigrant, and charged him with federal terrorism and weapons offenses in connection with that bombing and two others in New Jersey.

According to prosecutors, Rahami had posted videos praising a former leader of the al-Qaida terrorist group and decrying U.S. military actions in countries like Afghanistan and Syria on social media prior to his arrest.