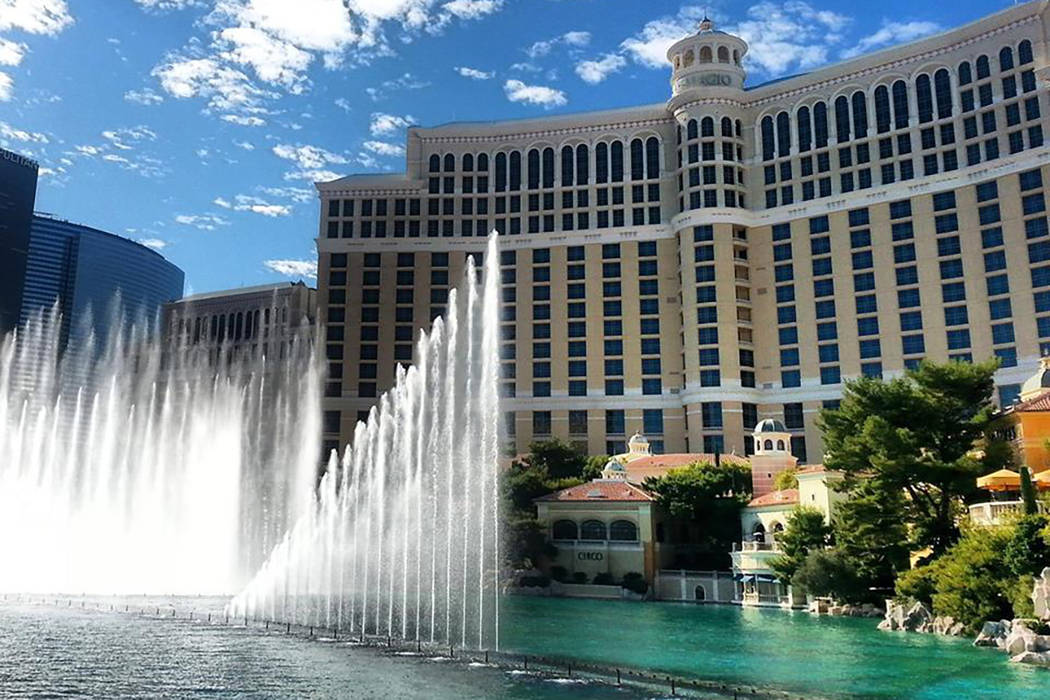 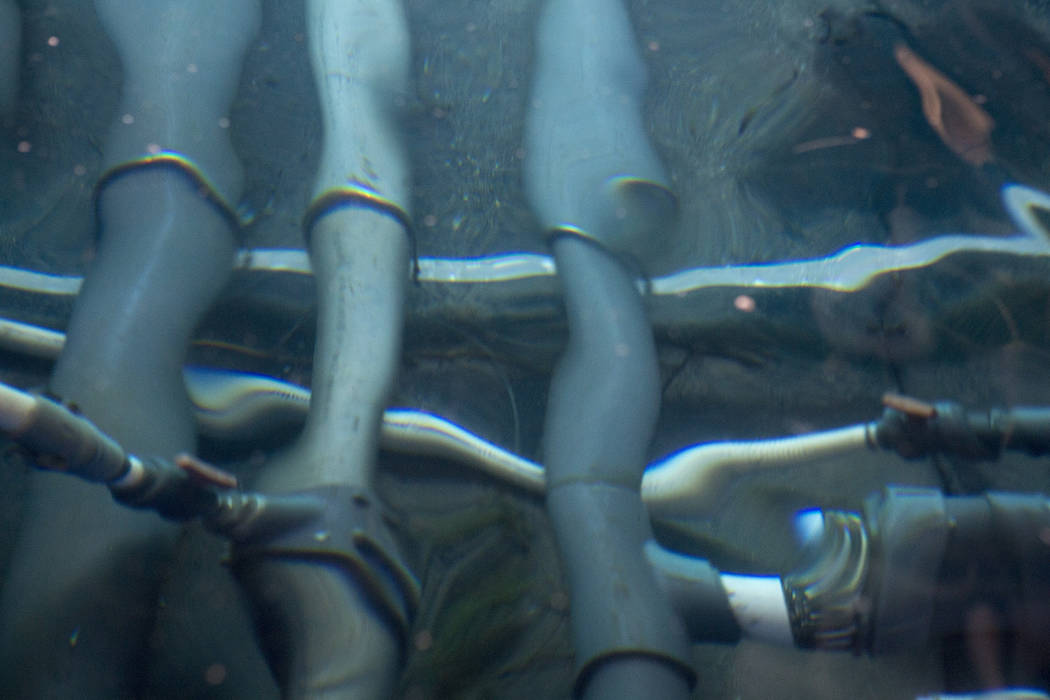 Pipes are woven at the bottom of the Fountains at Bellagio on Tuesday, April 18, 2017, at Bellagio hotel-casino in Las Vegas. Bridget Bennett Las Vegas Review-Journal @bridgetkbennett 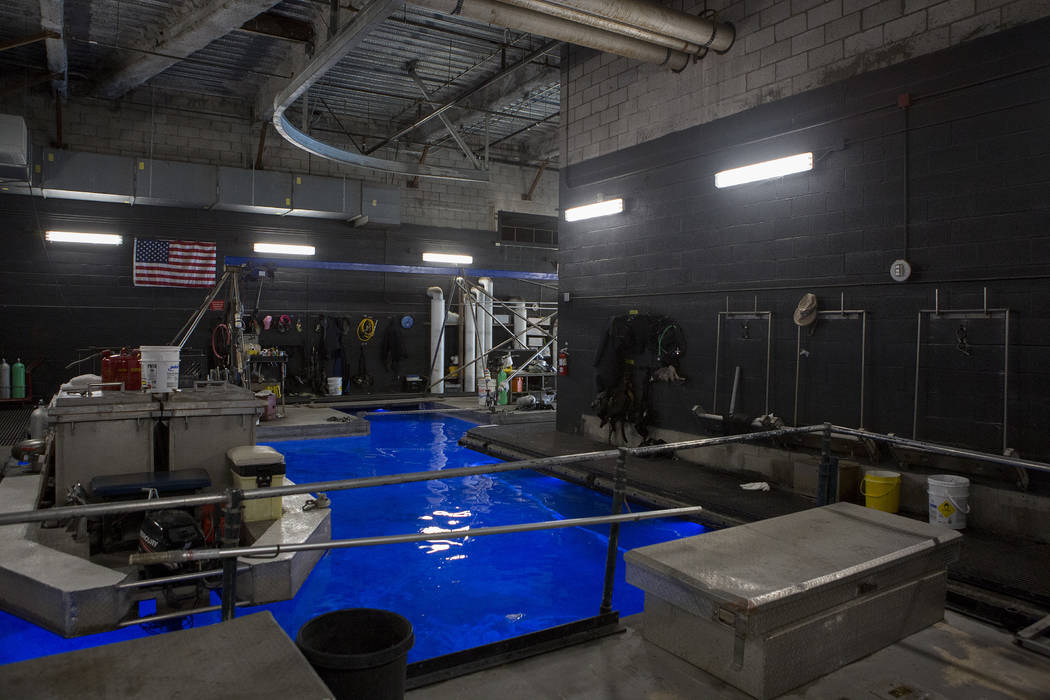 Boats and other gear are stored in a maintenance area for the Fountains at Bellagio, nicknamed the "Batcave," on Tuesday, April 18, 2017, at Bellagio hotel-casino in Las Vegas. Bridget Bennett Las Vegas Review-Journal @bridgetkbennett 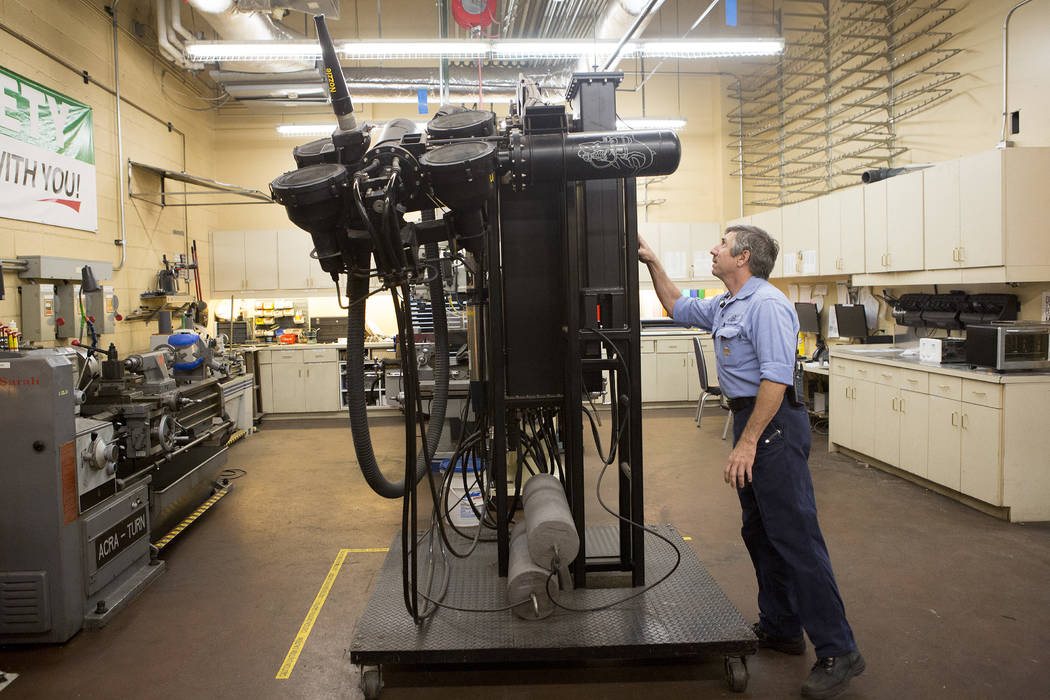 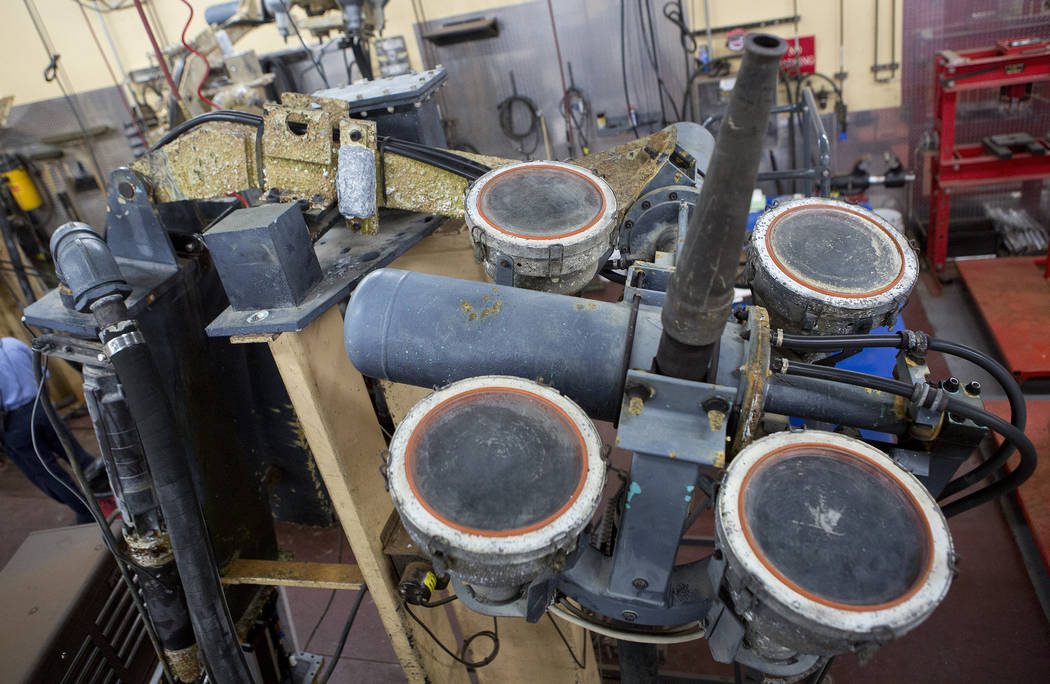 An Oarsmen ready for some repairs or tune-ups sits in a maintenance area at Bellagio hotel-casino on Tuesday, April 18, 2017, in Las Vegas. Bridget Bennett Las Vegas Review-Journal @bridgetkbennett 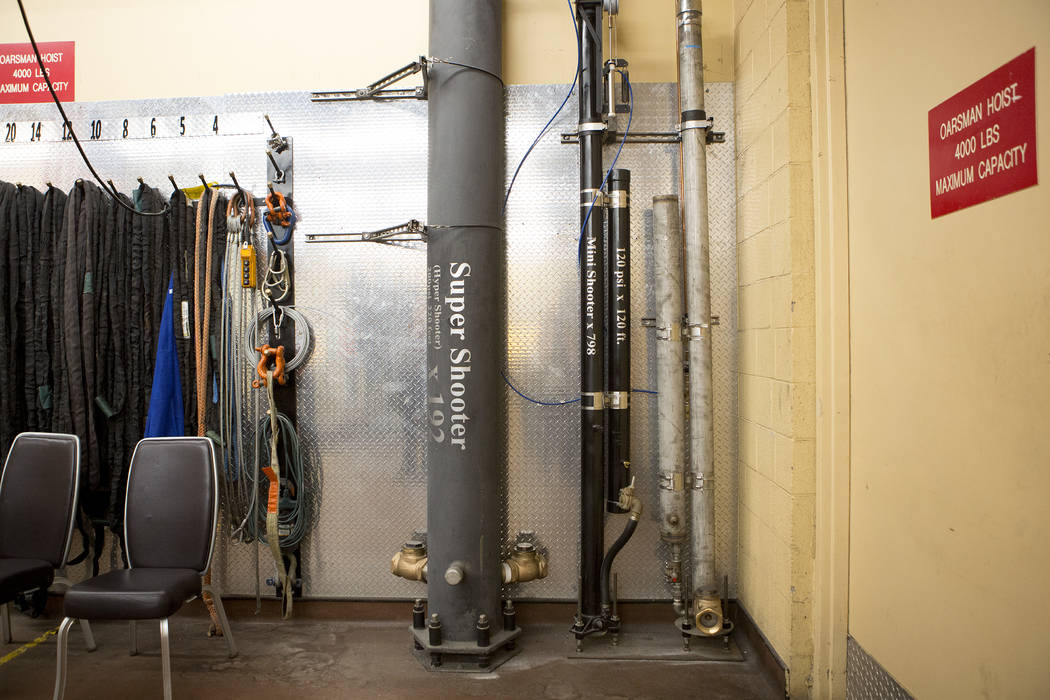 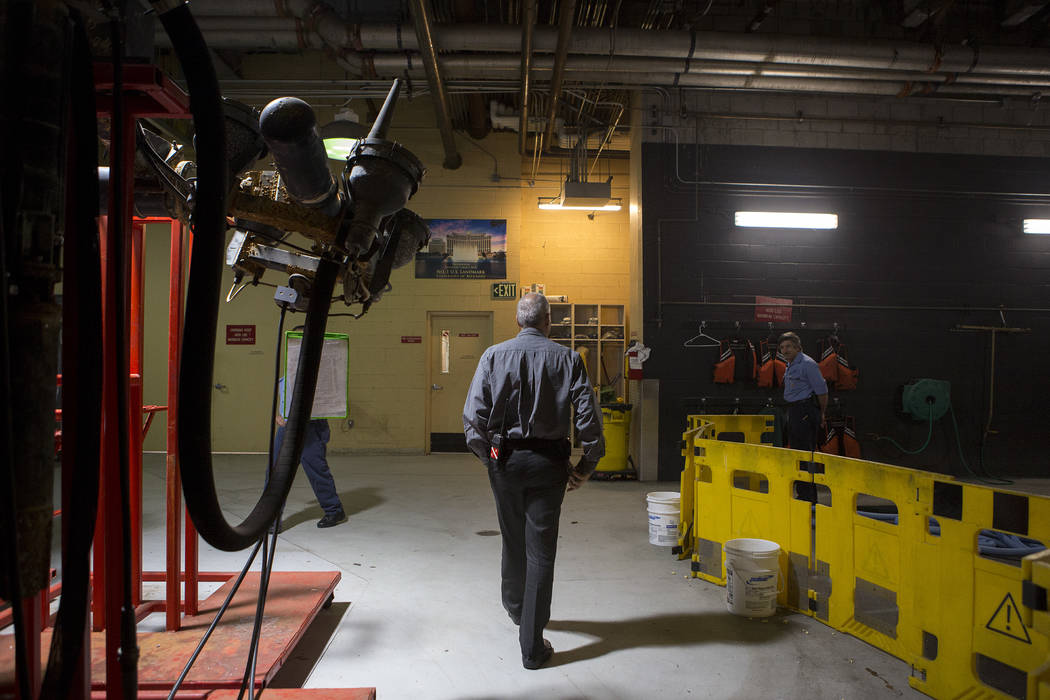 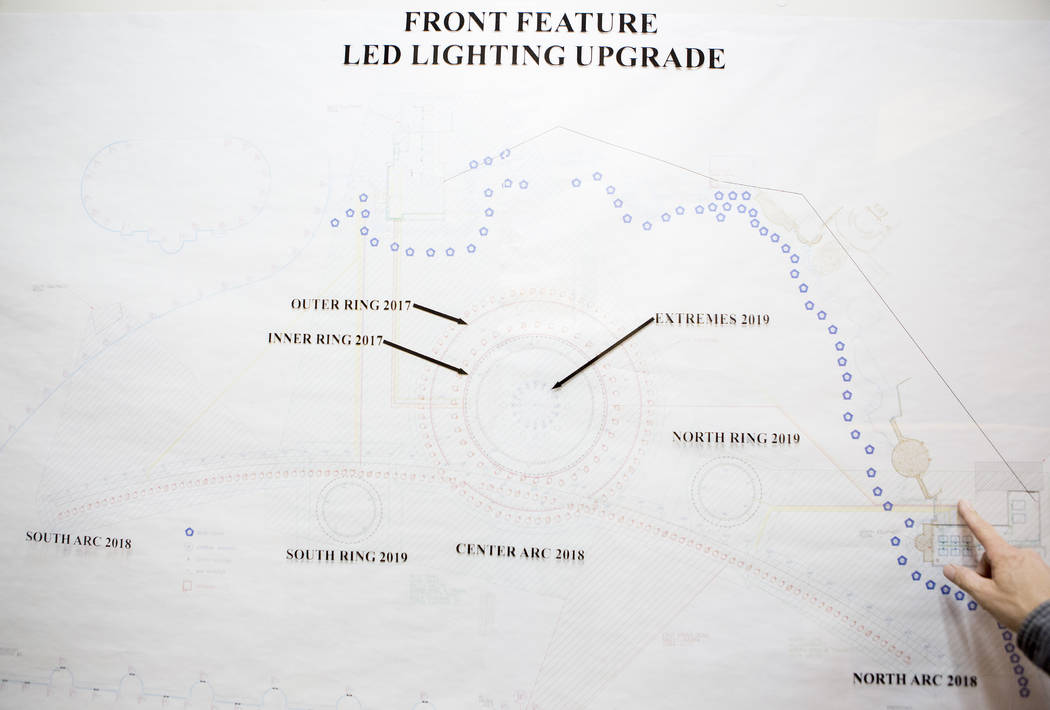 Manager of the Fountains at Bellagio Curtis Briggs explains the layout of the fountains and lighting at Bellagio hotel-casino on Tuesday, April 18, 2017, in Las Vegas. Bridget Bennett Las Vegas Review-Journal @bridgetkbennett 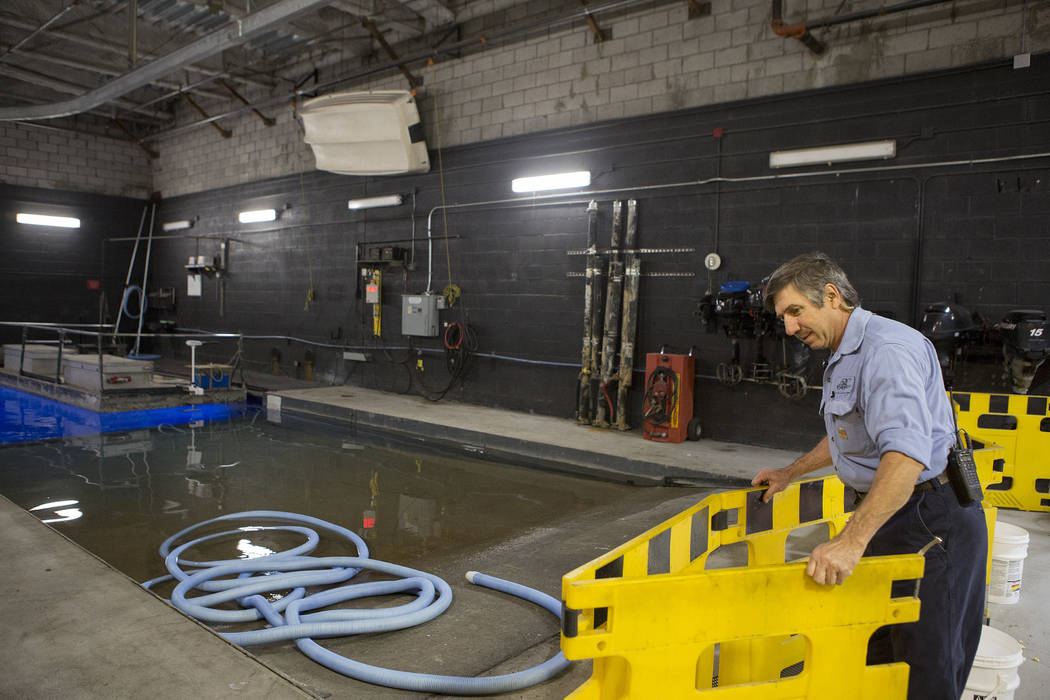 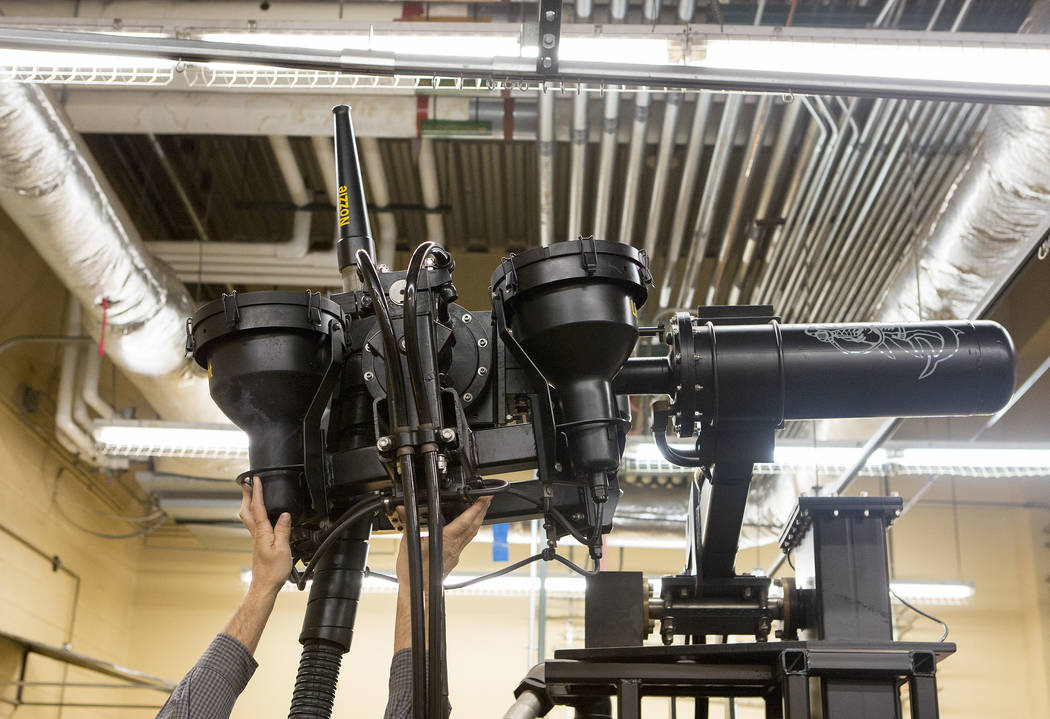 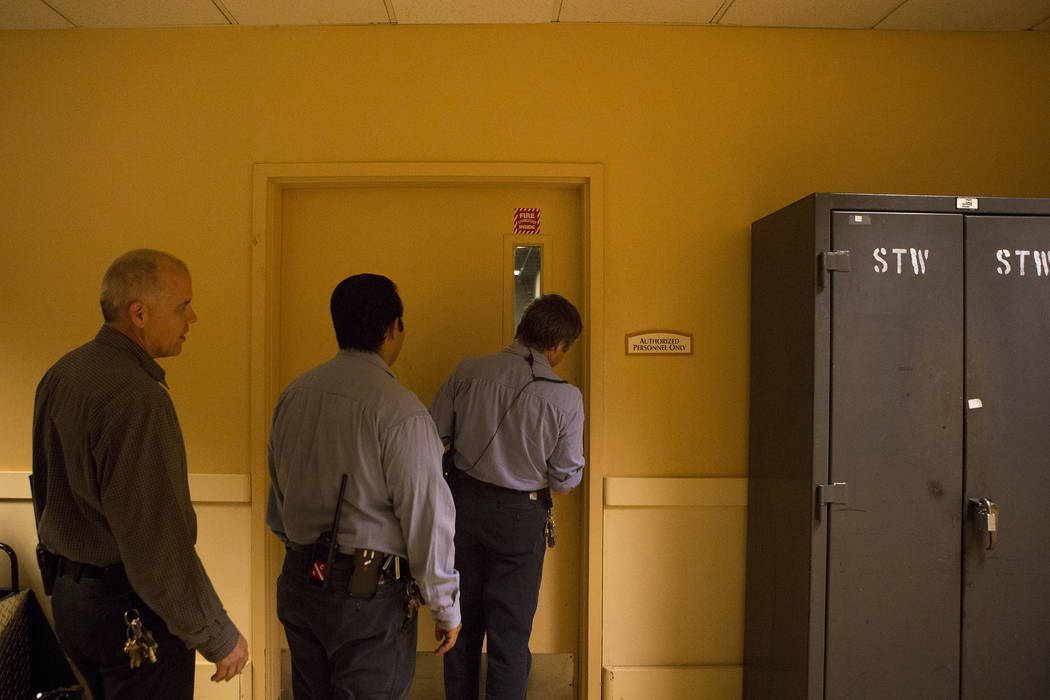 Deep in what’s dubbed the Batcave, about 30 staffers quietly toil with one-of-a-kind vehicles, masks and skin-tight outfits to ensure the Fountains of Bellagio keeps running.

“It was named the Batcave before we even opened,” said Curtis Briggs, manager of the Fountains. “We don’t have a Batboat; we have a Bellagio barge.”

The Batcave has several boats, two of which the staff built to serve the attraction’s very specific needs. One serves as a mobile filtering system and the other is a barge with a winch for moving the fountain’s water cannons, which weigh up to 1,800 pounds each, to the maintenance area. Because of the challenge of moving the huge pieces, staffers prefer to do the repairs in the lake whenever possible. Every member of the staff is scuba-certified.

“The first summer, the lake got up to 87 degrees, but in the winter it can drop as low as 38,” Briggs said. “That’s why we do most of our preventative maintenance. When it gets cold, you have to limit your time in the water.”

About half of the staff has been in place since the fountains were built, maintaining equipment that has been underwater for 19 years. The dancing water show’s cannons includes Oarsmen, which move back and forth, and Minishooters, Supershooters and Extremeshooters, all of which fire straight up.

“The static devices launch the water at different pressures,” said Arnold Cabrera, a longtime member of the maintenance staff. “Generally, they go up a foot for every pound per square inch, so the Extremeshooters, which are set at 460 PSI, go up about 460 feet, nearly as tall as the hotel.”

When the water goes that high, it comes down as a mist. Water from the other canons comes down in column form, which the crew feels looks more dramatic.

The show system also includes fog manifolds — structures that come out of the water with approximately 5,000 nozzles.

“We like to say we can turn Paris into London in five minutes,” Briggs said. “When we first opened, every time we had a show that used the fog, people called the fire department.”

The lake had been open for a year before the ducks found it, and initially, crew members made the mistake of feeding them. When they realized they had 90 ducks, they saw their mistake and moved them off-site. The number of ducks is down to a manageable average of 15. As far as Briggs knows, no duck has ever been launched from the lake by a shooter or hit by a column of water.

“I’ve seen ducks turn 90 degrees to avoid the water column,” he said. “When the show is getting ready to go, compressors turn on and you can hear that. It takes about two minutes for shields rise out of the water, and the ducks seem to know to get out of the way then.”

WET Design conceived of, designed and built the attraction in two years. It was budgeted at $4.5 million, but as more features were added, the cost skyrocketed to $50 million. To meet the time frame, portions were subcontracted and less expensive materials were used. The company that built the Oarsmen has gone out business, creating challenges for the crew that keeps it all running.

“The Oarsmen are mostly built with mild steel and coated with a tar-based paint that wore off in about a year,” said Fountains of Bellagio engineer Rod Botelho. “We took them all out, sandblasted and powder-coated them. They were designed to last five years. We’ve kept them running 19, and we should be able to keep them going for quite a few more.”

Keeping the water clean involves complex engineering and hard work. The filtration system’s pumps can move 5 million gallons a day — about a quarter of the lake’s contents.

“There just wasn’t a filtration system available that was large enough,” Briggs said. “Ideally the water should all be turned over every 24 hours, and it takes four days for the lake water to get turned over. Because of that, we have a cleaning barge.”

The barge separates heavy objects found at the bottom of the lake, such as coins, which are filtered through 52 pool filters mounted to the barge. The coins are placed in an account that distributes money to several charities.

“It takes a lot of manpower to do it, but we’ve got to get the coins out of the water anyway,” Briggs said.