It’s like walking David Ortiz to get to Manny Ramirez back in the day.

That was the analogy Southern Nevada Falcons clean-up hitter Zak Avery used after hitting a walk-off single in Thursday’s 4-3 win over the Las Vegas Grizzlies, in an elimination game of the Connie Mack state tournament at CSN’s Morse Stadium.

With the game tied 3-3 and runners at the corners in the bottom of the seventh inning, Grizzlies pitcher Ricky Kinney intentionally walked the Falcons’ top offensive threat, Bligh Madris, to get to Avery, who promptly stroked a 1-0 fastball into left field to score Tyler Van Stone.

“I was happy it happened; that’s what I was hoping would happened,” Avery said. “I knew I was getting the off-speed first pitch so (I laid off). I just had to get the ball through, they were playing in, so I just had to poke something and I was thinking barrel on the ball. I saw it, everything kind of slowed down when you get that adrenaline going. I just can’t describe the feeling right now, I was glad it happened.”

While the Grizzlies came into the tournament seeded seventh, it was the top-seeded Falcons (22-3) who struggled to make things happen offensively and manufacture runs when they did get runners aboard. The Falcons’ defense committed three errors.

“That’s the way high school baseball goes, anyone can win at any moment,” Falcons coach Jason Sirak said. “Whoever makes the least amount of errors usually comes out on top.”

Unfortunately for the Grizzlies (14-11), their lone error proved to be the most costly of the game.

After Keilii Maruyama was hit by a pitch to lead off the bottom of the seventh, pinch-runner Dillon Peet moved to second on Alex Elizondo’s sacrifice bunt. Peet moved to third on Van Stone’s hard-hit infield single to shortstop, and eventually scored when Austin Parentau’s hot shot caromed off Grizzlies’ third baseman Shayne Watkins. Van Stone advanced to third, and Parentau was safe at first.

The Grizzlies then chose to put Madris on base and pitch to Avery.

“I was very confident in Zak, especially after they walked Bligh,” Van Stone said. “They’re kind of telling Zak, we think you’re a worse hitter than Bligh, so we’re going to bring you to the plate, so he has a lot to prove there. And I just knew he was going to get it done there for us.”

The Falcons will play the Las Vegas Mustangs (15-10) in an elimination game at 4 p.m. Friday. The winner of that game will play at 7 p.m. against the Las Vegas Crusaders (17-8).

Las Vegas Mayhem 4, Las Vegas Crusaders 3 — The Mayhem used a four-run fifth inning to erase a 2-0 deficit, then held on for the win to move into Saturday’s championship game.

Francisco Villegas struck out eight and scattered five hits over seven innings to earn the win.

The Mayhem (21-3) will play for the title at 10 a.m. Saturday against the winner of Friday’s final game. The Mayhem will have two chances, if necessary to win the double-elimination tournament.

Las Vegas Mustangs 5, Green Valley Elite 4 — The Mustangs staved off a furious seventh-inning rally, as the Elite (17-8) scored all their runs in the bottom half of the game’s final frame.

The Elite had runners on second and third with none out, but Mustangs starter Nick Parr got Green Valley’s Franke Fitzgerald to pop out to first before striking out A.J. Amelburu and Jarod Penniman to end the game. Parr scattered five hits, allowed just one earned run and struck out six.

Tyler Burton led the Mustangs, going 2-for-4 with two doubles and two RBIs, and Eric Jordan and Quin Ayers each had two singles. 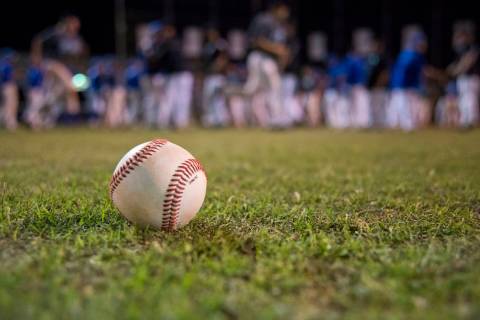 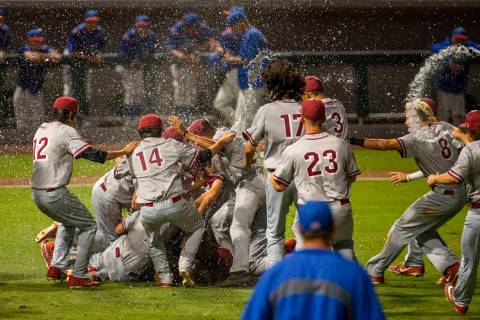