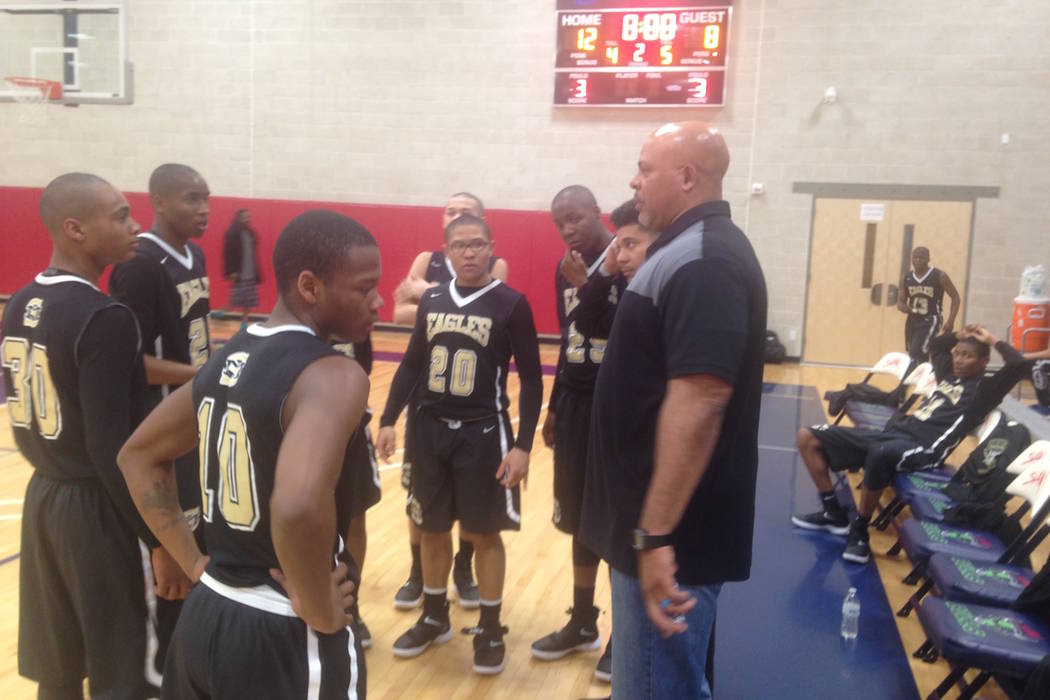 Spring Mountain coach Asad Ali talks to his team after the first quarter of the Golden Eagles’ 42-37 win over Jackpot in a Class 1A state semifinal at SLAM Academy on Friday, March 1, 2019. Bartt Davis/Las Vegas Review-Journal

Spring Mountain’s Robert Arceneaux had only four points through the first three quarters of Friday’s Class 1A state semifinal.

He more than made up for it in the fourth quarter.

The junior forward scored the first two baskets of the fourth quarter and finished with 13 points to help the defending state champion Golden Eagles claw out a 42-37 win over Jackpot at SLAM Academy.

Spring Mountain (14-8) will face Mineral County (30-1) for the state championship at 8:10 p.m. Saturday at Orleans Arena. The Golden Eagles will be bidding for their third crown in five years.

Arcenaux averages 12.4 points per game. His 3-point play with 1 minute, 7 seconds left in the game gave the Golden Eagles a 37-29 lead, eliminating any lingering doubts. Arceneaux also had 10 rebounds.

The Golden Eagles had all sorts of trouble getting untracked until the late stages of the third quarter.

Josiah Johnson’s right-wing 3-pointer with 2:21 left in the third brought Spring Mountain to within 18-16 and started a 15-0 run.

“Complacency is something that comes in with kids this age,” Ali said. “They realized they needed to sharpen up.”

I’Shad Livingston had three stick-back baskets in the fourth quarter for the Golden Eagles, who held a 39-29 rebounding edge.

Johnson finished with 11 points, and Livingston scored 10 for Spring Mountain, which forced 22 turnovers, including 15 in the second half.

“I’d give us about a 75 on defense,” Ali said. “We were too lackadaisical early, but then we started forcing some turnovers.”

Mineral County and Eureka advanced to the girls Class 1A final. They’ll play at 6:20 p.m. Saturday at Orleans Arena.

Mineral County was a 57-51 winner over McDermitt. Eureka edged Coleville, 38-34 to earn its spot in the final.