Rayena Rael had 20 points for the Rattlers.

Rancho 57, Clark 29 — Tatiana Lee scored 12 points to lead the Rams past the Chargers.

Bobbi Floyd and Ci’Quadya Belser each had 12 points for Clark.

Bishop Gorman 45, Boulder Creek (Ariz.) 41 — At Phoenix, Maddison Washington had 18 points, and Sandria Bolden hit a key 3-pointer late in the game to lead the Gaels to victory in the Nike Tournament of Champions.

Raychel Stanley added 11 points and blocked a potential game-tying shot in the final minute, which led to a transition hoop by Gorman.

Centennial 70, Brea Olinda (Calif.) 27 — At Phoenix, Tramina Jordan had 21 points and five rebounds as the Bulldogs rolled in the Nike Tournament of Champions.

Teirra Hicks had 18 points and seven rebounds, and Paige Barber scored 11 for Centennial, which led 40-15 at the half.

ThunderRidge (Colo.) 42, Liberty 35 — At Phoenix, Taylor Rusk had 16 points as ThunderRidge topped the Patriots in the Nike Tournament of Champions.

Kealy Brown had 12 points, six rebounds and six steals, and Paris Strawther scored 11 for Liberty, which used an 11-1 second-quarter run to build a 17-12 halftime lead.

Marlborough School (Calif.) 55, Green Valley 24 — At Phoenix, the Mustangs rolled past the Gators in the Nike Tournament of Champions.

Virgin Valley 60, Spring Valley 32 — At Mesquite, Abbie Barnard scored 17 points to help the Bulldogs cruise past the Grizzlies in the Lady Bulldog Invitational.

Valley 65, Moapa Valley 19 — At Mesquite, Kennedy Wharton had 17 points to lead the Vikings to victory over the Pirates in the Lady Bulldog Invitational.

Gabrielle Cabanero and Zhani Thomas had 15 points apiece, and Alaihya Williams scored 10 for Valley, which led 39-9 at halftime.

Dixie (Utah) 51, Desert Oasis 36 — At Mesquite, Liz Empey had 23 points to help the Flyers down the Diamondbacks in the Lady Bulldog Invitational.

Panguitch (Utah) 69, Pahranagat Valley 24 — At Mesquite, Whittni Orton scored 21 point to propel the Bobcats past the Panthers in the Lady Bulldog Invitational.

Chesney Campbell and Taylor Bennett each added 16 points for Panguitch, which led 46-15 at the half. 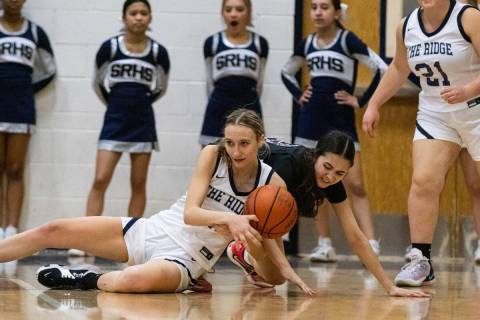 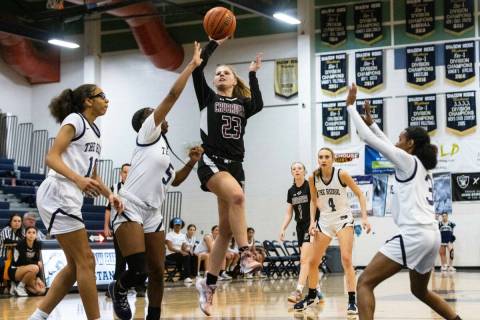