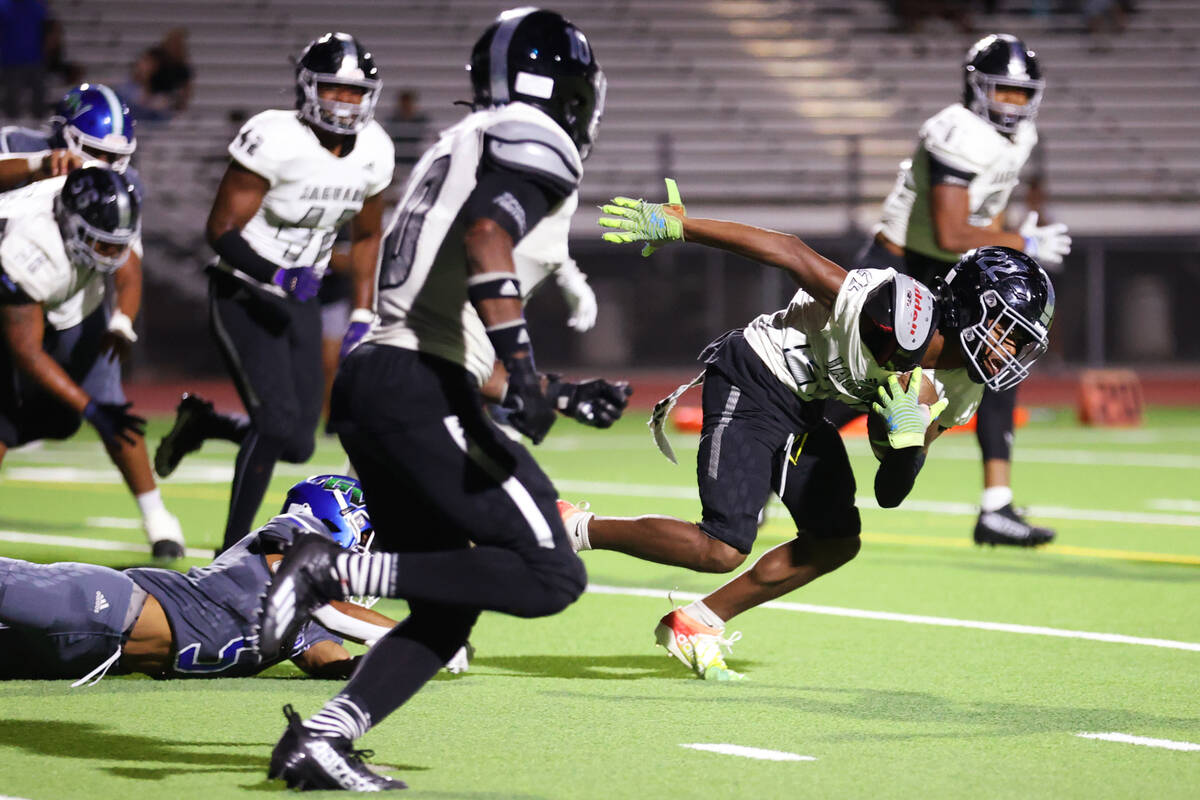 Desert Pines' Trey Jackson (22) intercepts the ball before returning it for a touchdown against Green Valley in the first half of a football game at Green Valley High School in Henderson, Friday, Sept. 30, 2022. (Erik Verduzco / Las Vegas Review-Journal) 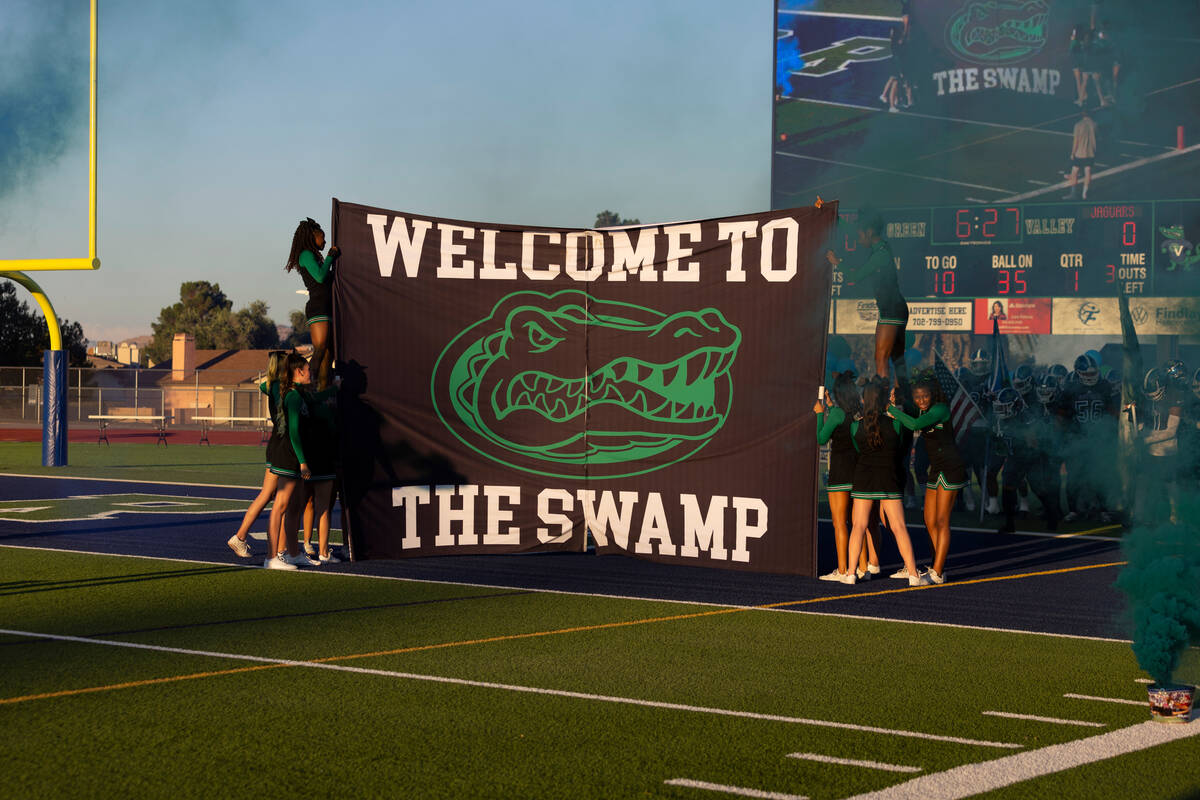 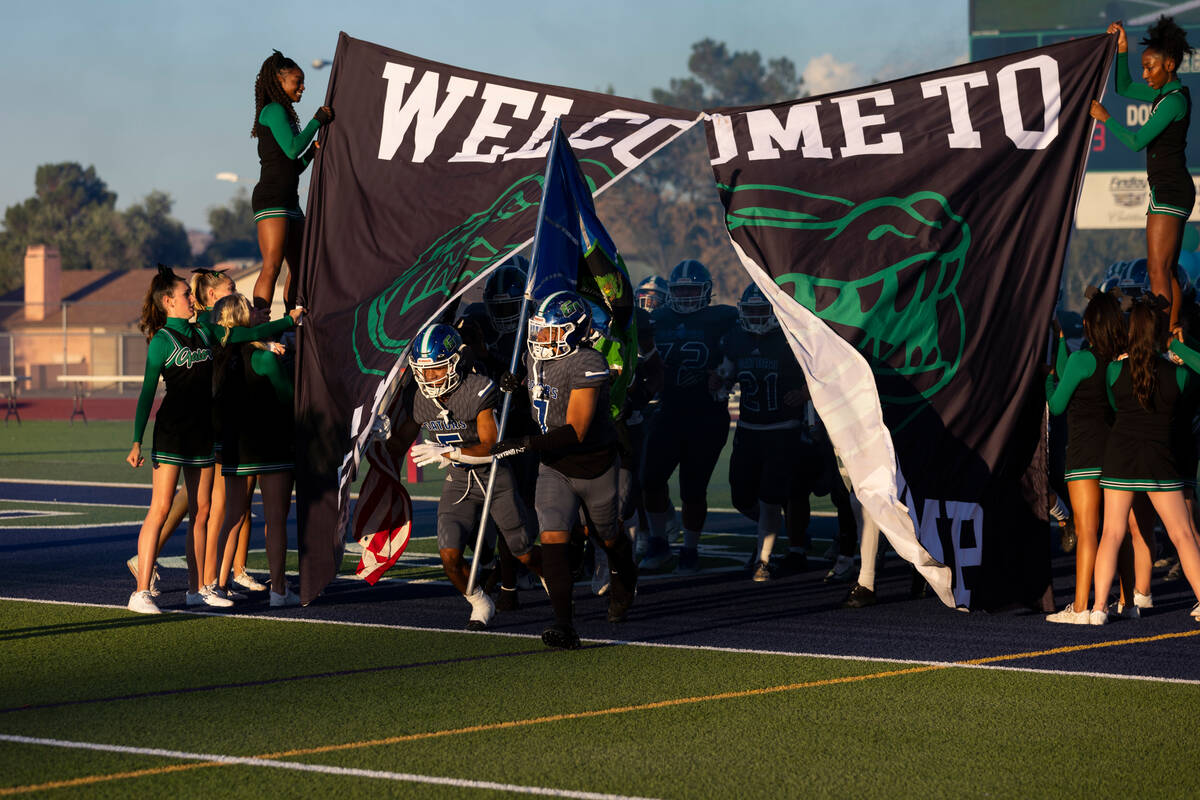 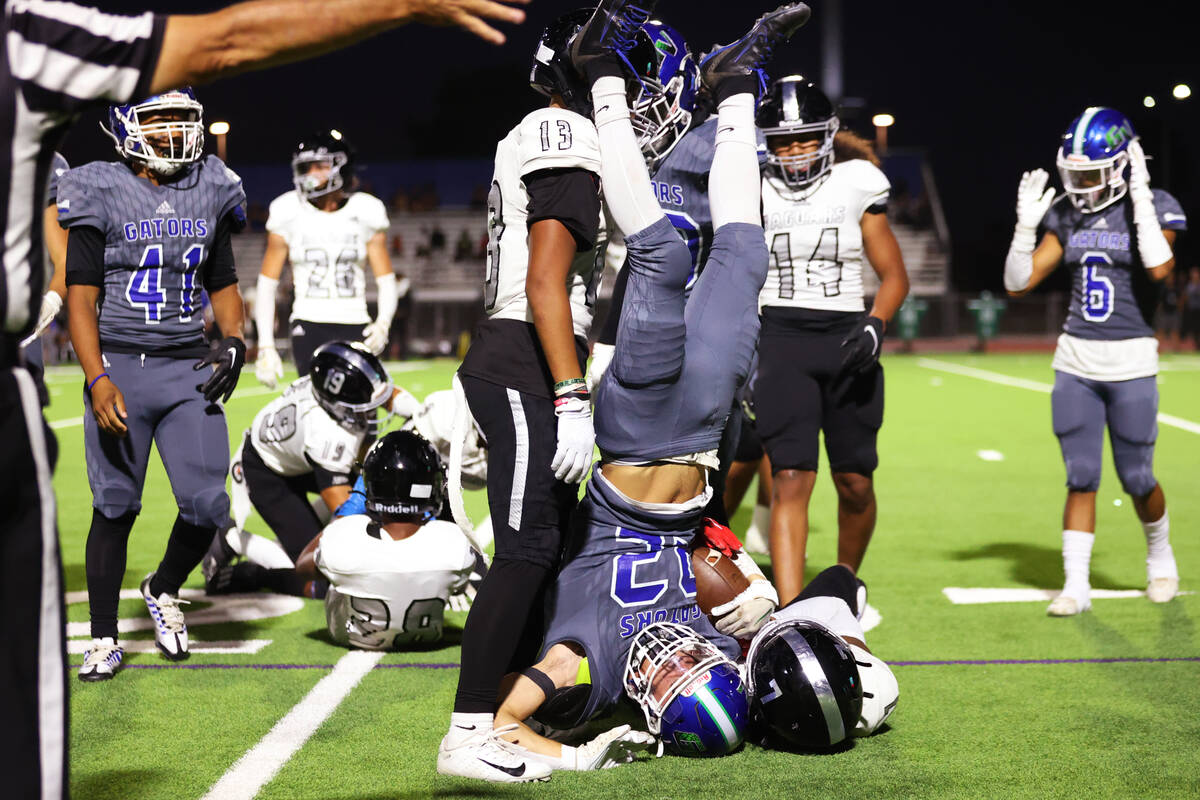 Green Valley's Daniel Brady (22) gets up after getting tackled by Desert Pines' Tyrik Siméus (7) in the first half of a football game at Green Valley High School in Henderson, Friday, Sept. 30, 2022. (Erik Verduzco / Las Vegas Review-Journal) 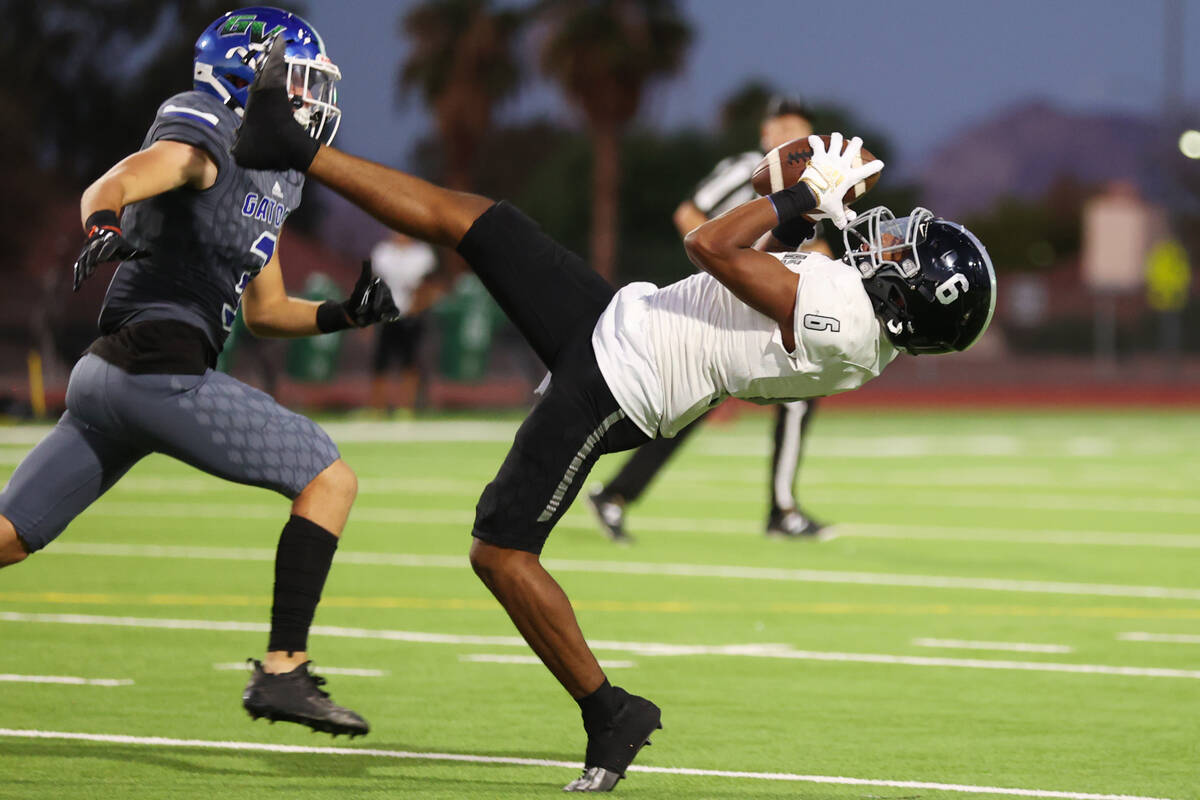 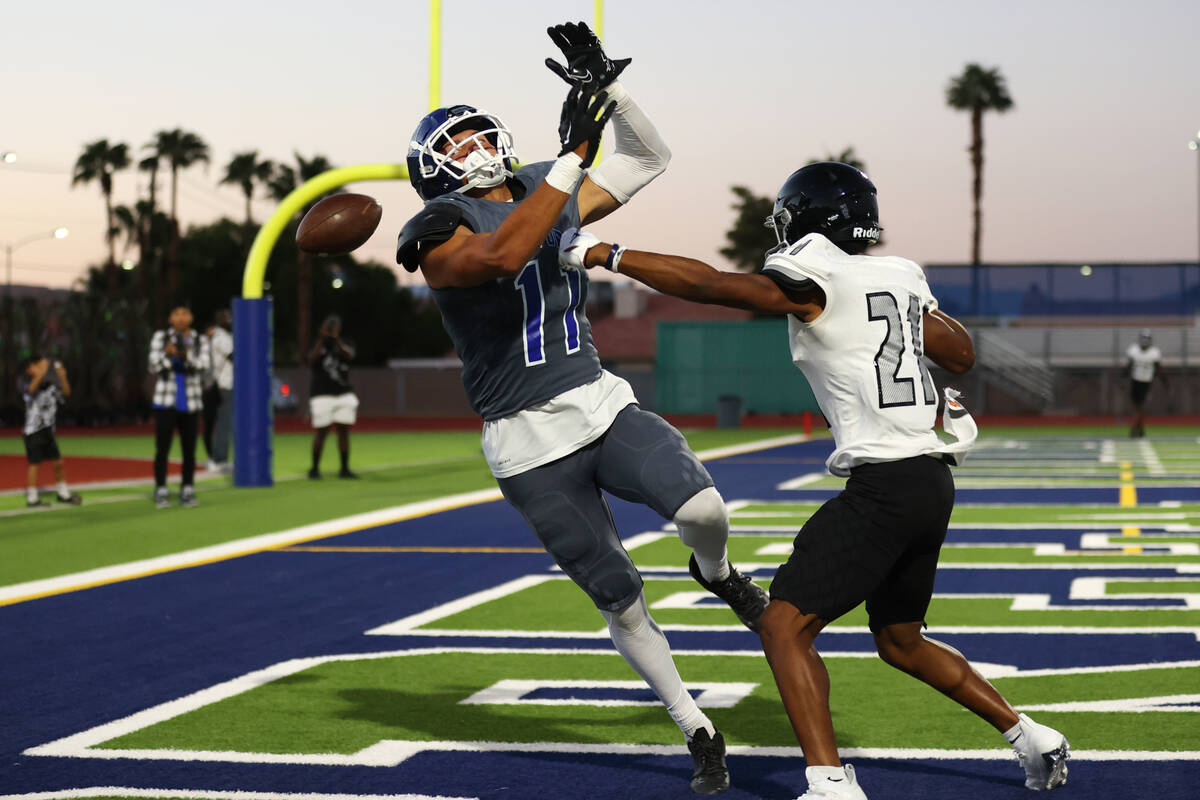 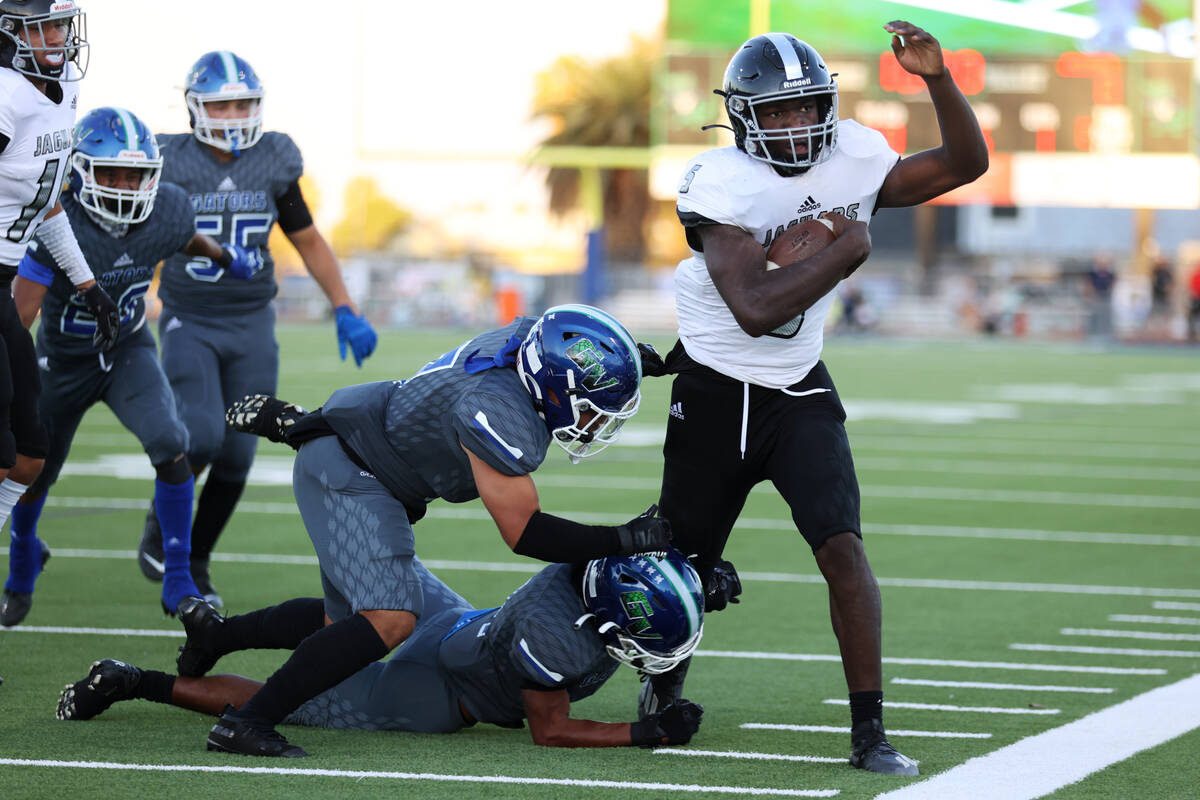 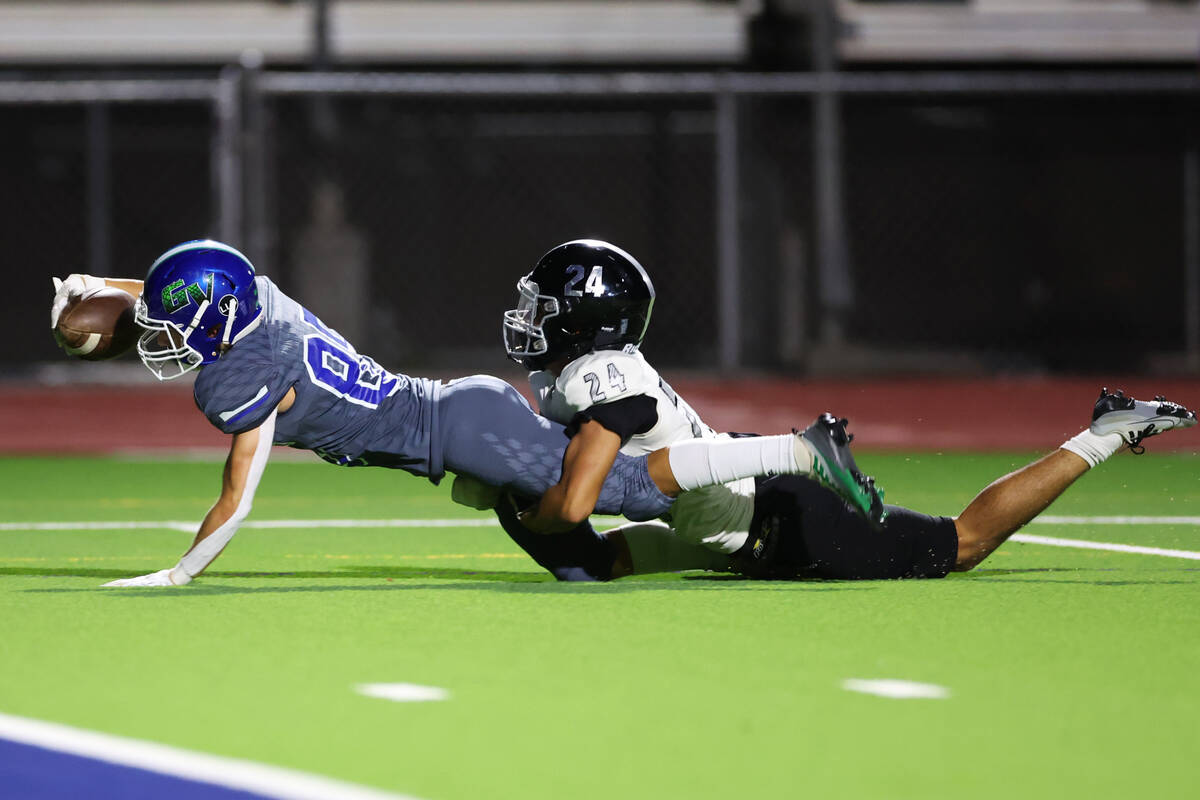 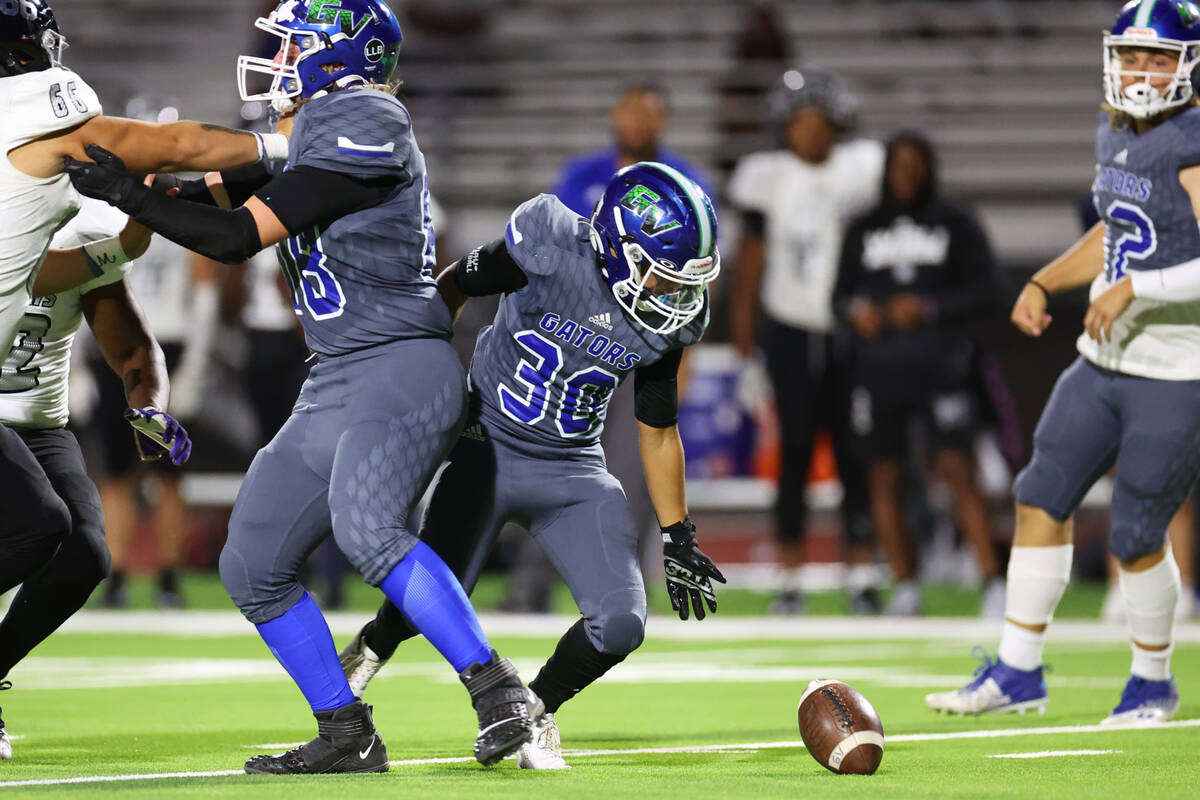 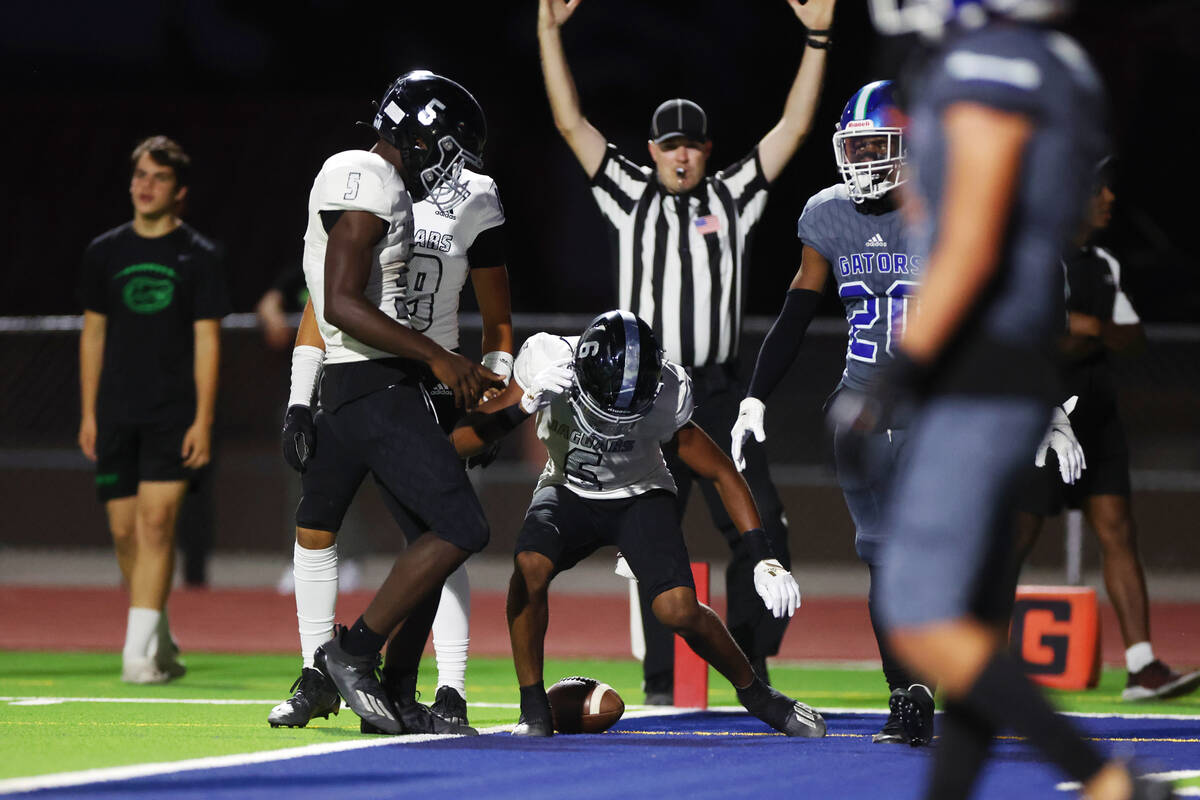 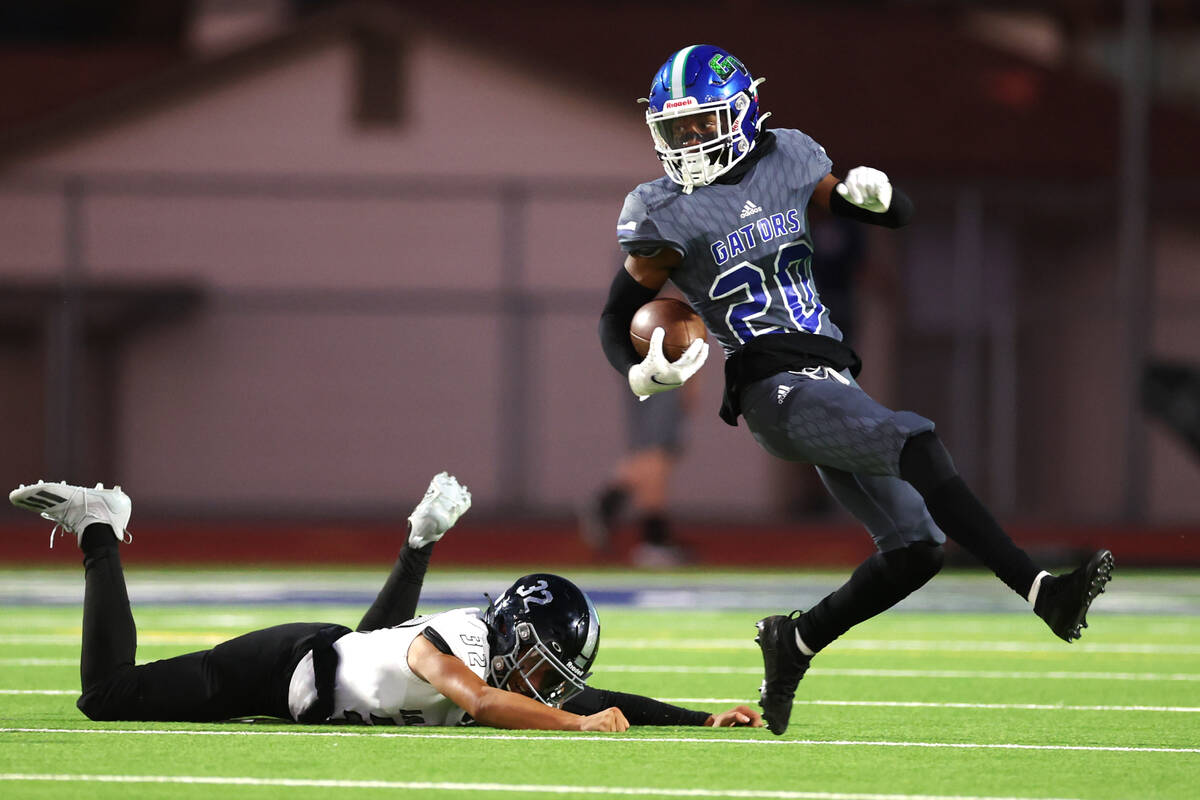 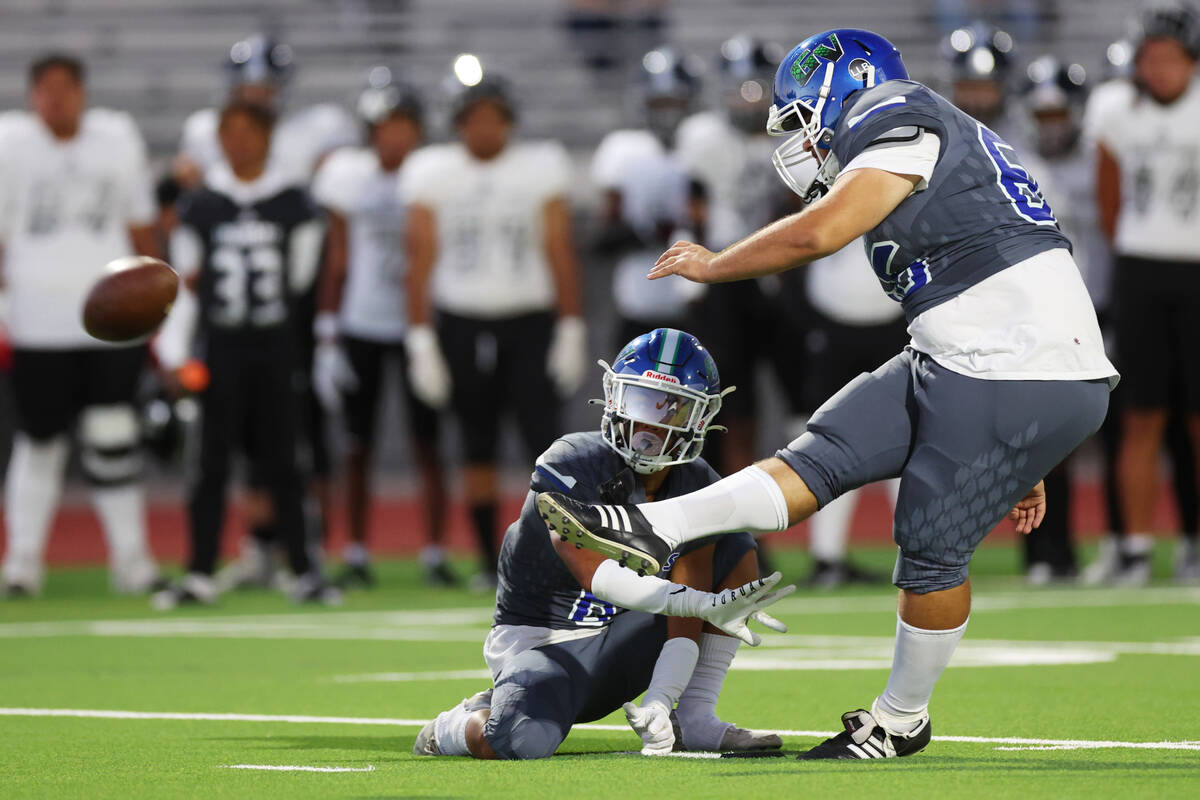 Green Valley's Steven Shamoun (66) kicks a field goal for a score against Desert Pines in the first half of a football game at Green Valley High School in Henderson, Friday, Sept. 30, 2022. (Erik Verduzco / Las Vegas Review-Journal) 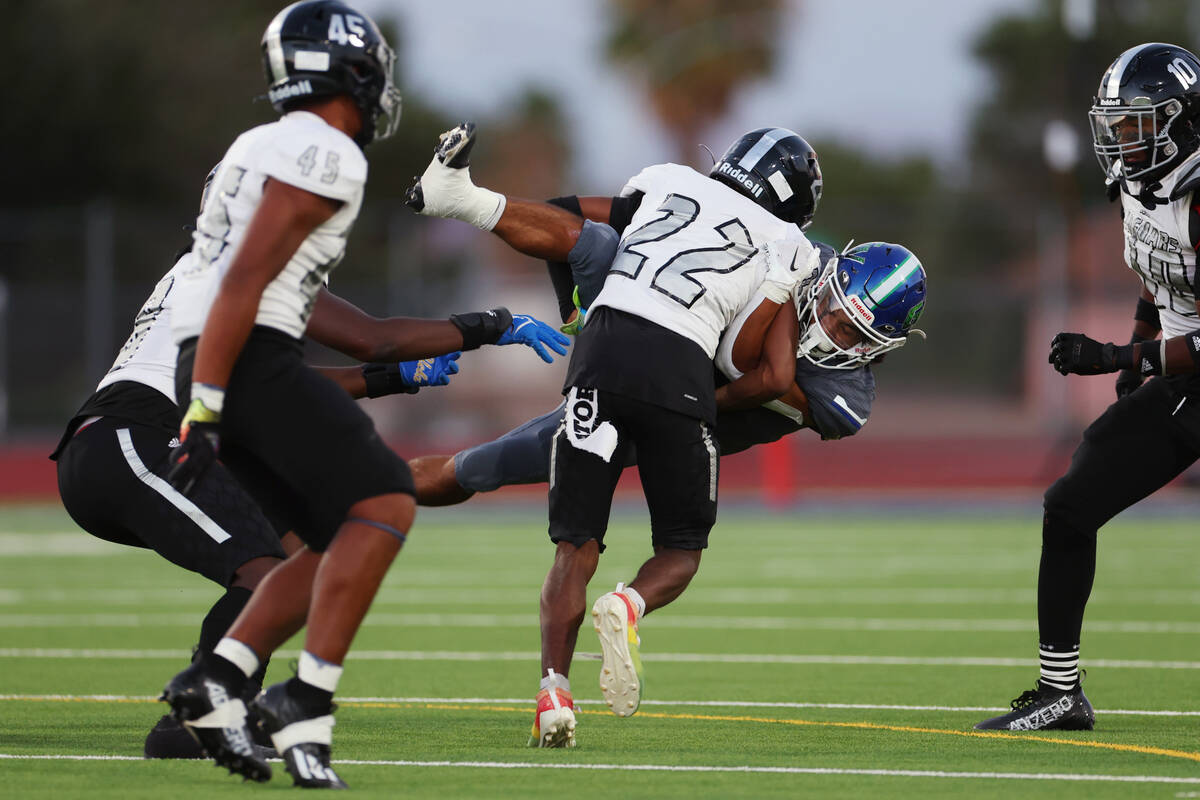 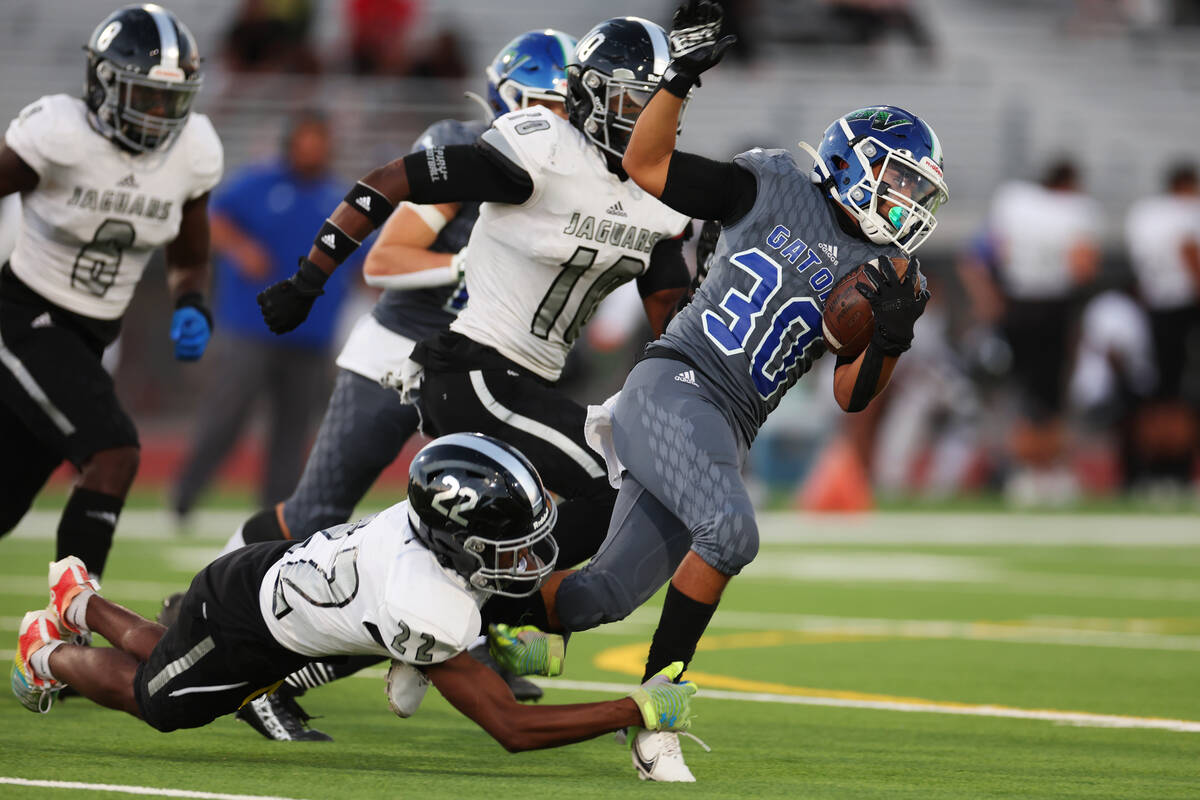 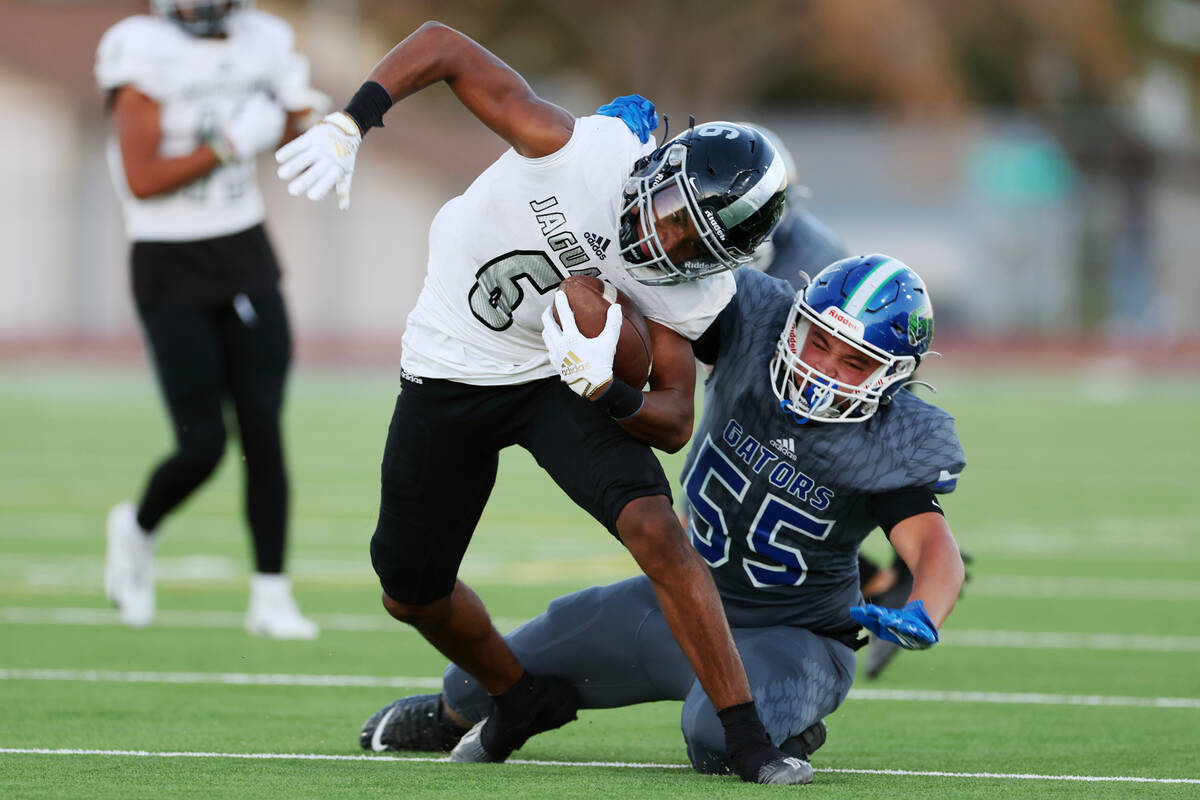 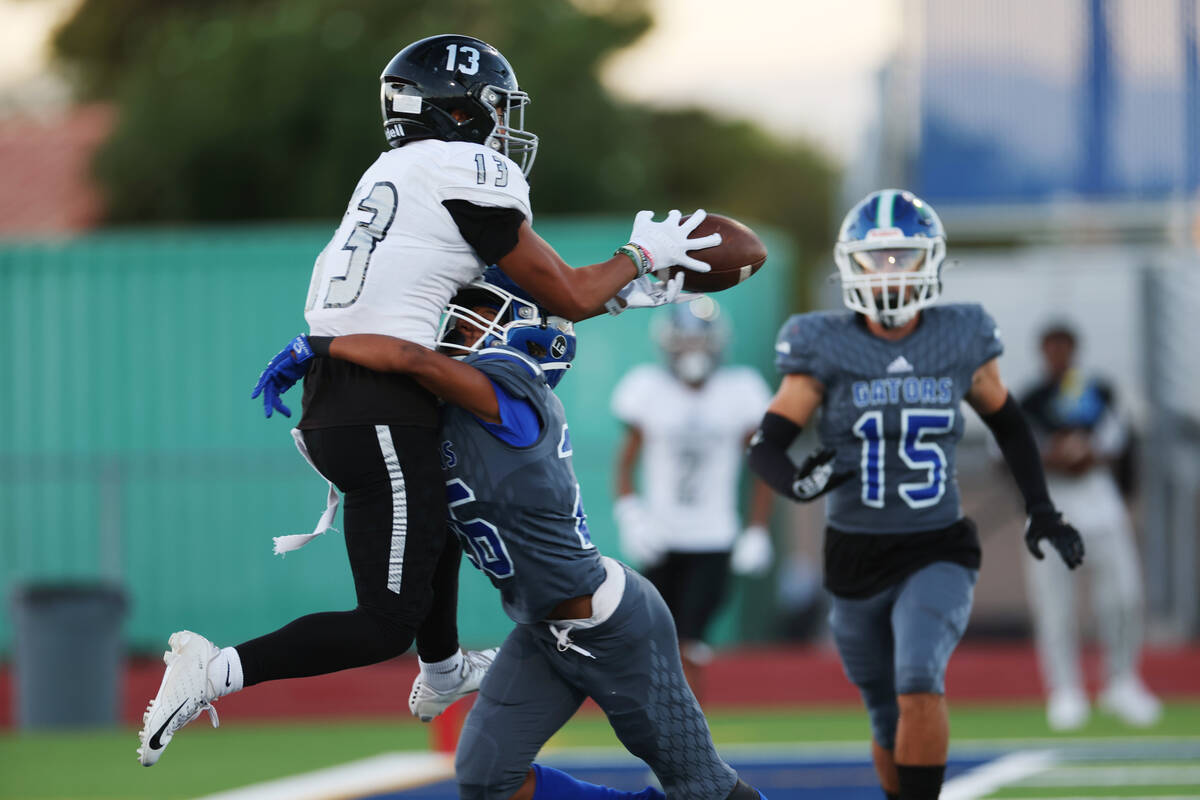 Despite continuing to lose key players, the Jaguars keep finding ways to win.

Defensive back Isaiah Rubin, rated the No. 2 Nevada prospect in the class of 2024, recently became the fifth Desert Pines stalwart to transfer to a California school since the end of last season.

But the Jaguars hardly skipped a beat, parlaying another staunch defensive effort into a 28-10 Class 5A Mountain League win at Green Valley.

Freshman free safety Treyshaun Jackson intercepted two passes and returned both for touchdowns — the second for 99 yards just before halftime — as the Jaguars improved to 2-0 in league play and 5-1 overall.

The Jaguars took a 28-3 halftime lead and limited Green Valley (0-1, 1-5) to a single second-half touchdown.

The home team was hanging tough until just before halftime when the speedy Jackson stepped in front of a pass in the left flat and raced the length of the field. His first pick six, on Green Valley’s previous possession, came from 35 yards and put the Jaguars ahead 21-3.

“ ‘Action’ Jackson — he’s a special, dynamic player,” Rodriguez said. “That really changed the momentum and separated the game. He’s got touchdowns receiving, he’s got two on special teams, and now he’s got two on interceptions.”

Desert Pines, which had scored 37 points or more in its four wins since losing its season opener, yielded a touchdown for only the third time during its win streak. The Jaguars totally stuffed the Gators’ running game, holding Green Valley to 23 net yards on 25 attempts.

Gators quarterback Justyn Delzeit had more success throwing the ball, completing 21 of 36 passes for 187 yards and a touchdown. Alfredo Rodriguez caught eight passes for 115 yards, but the hosts never seriously threatened after Jackson turned the game upside down with his two interception returns.

It was a big night for Desert Pines youngsters. Freshman wide receiver Massiah Mingo caught short TD passes of 3 and 4 yards — the second from fellow ninth grader AJ Stowers, who entered the game late in the second quarter when the Jaguars’ offense began to sputter. Mingo finished with six receptions for 85 yards.

Junior Gregory Burrell gained 97 yards on 11 carries to lead the Jaguars’ attack. But every time Desert Pines seemed on the verge of putting a drive together, it was sidetracked by penalties. The Jaguars were whistled 16 times for 199 yards in infractions.