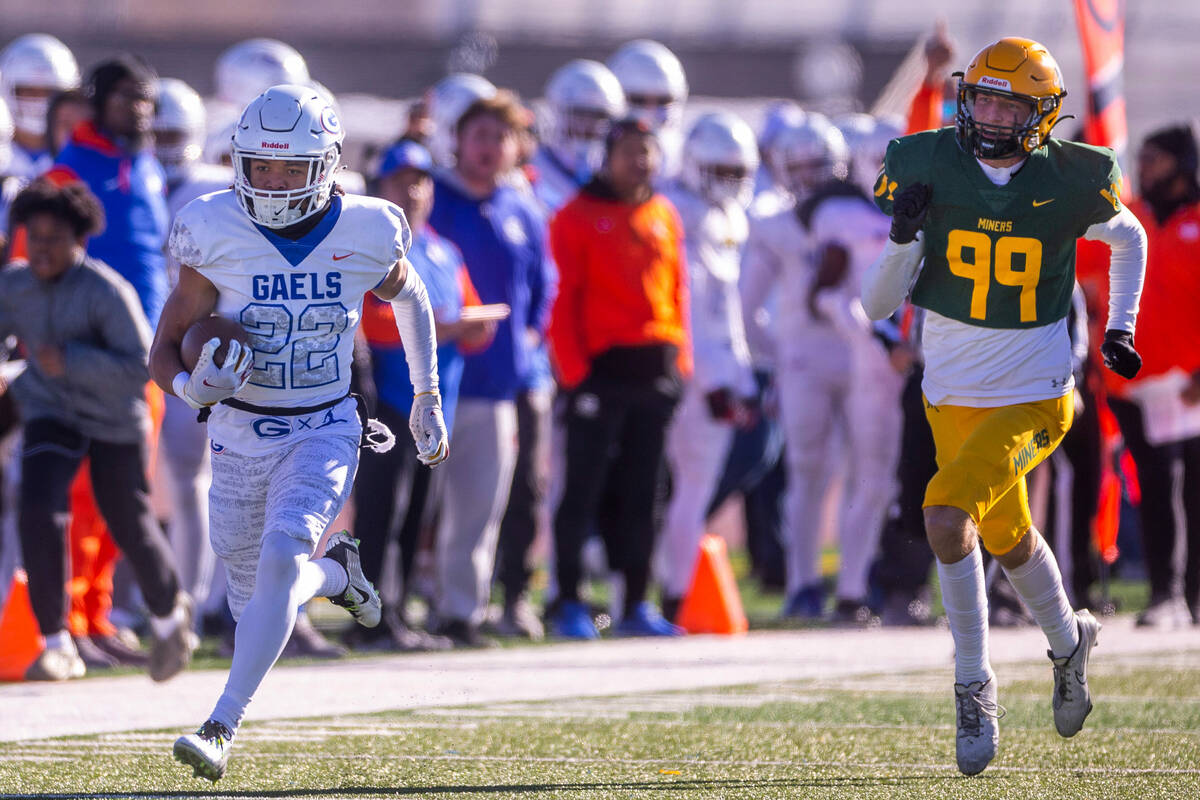 Bishop Gorman RB Micah Kaapana (22) streaks down the sideline for another long touchdown run away from Bishop Manogue DB Carson Jensen (99) during the first half of their 5A state championship game on Saturday, Nov. 19, 2022, in Carson City. (L.E. Baskow/Las Vegas Review-Journal) @Left_Eye_Images

Bishop Gorman junior running back Micah Kaapana only had five touches in the Class 5A football state championship game. But he made sure to make the most of them.

Kaapana rushed for four touchdowns on four attempts and had a receiving touchdown in Gorman’s 70-6 win over Bishop Manogue in the 5A state title game on Nov. 19.

He rushed for 236 yards and had a 42-yard touchdown reception. His efforts earned him Nevada Preps Athlete of the Week honors.

Kaapana and the Gaels had to deal with frigid temperatures in Carson City. He said it was different from any other game, but he adapted quickly.

Kaapana credited his offensive line for opening up running lanes to help him have a big game.

“They made everything much easier,” Kaapana said. “They made it so my job was to just run.”

A goal for Kaapana in the offseason was to continue to work on his conditioning for the long season. He said as the season went on, that work paid dividend throughout the season.

Kaapana pointed to the early loss to Mater Dei as a crucial point in the season. He said it gave him and his teammates the incentive to work even harder in pursuit of a state title.

“It gave us that hunger to not have that feeling of losing any more,” Kaapana said.

He believes the brotherhood on the team contributed greatly to Gorman’s success. Kaapana said the time spent traveling to out-of-state games was helpful in creating a strong bond.

“It was special … and having all that time to bond and build a great relationship with each other, it was great,” Kaapana said.