Dakota Maack had two goals and three assists, and Mason Reid had a goal and an assist for Foothill, which got a goal from Jackson Dietrich.

Yann Moncayo scored twice for Boulder City. Victor Andrades added a goal and two assists, and Marcus Walker scored once for the Eagles.

Palo Verde 5, Silverado 0 — At Palo Verde, Matt Thomas and Griffin Mallas each scored twice, and Austin Manthey had four assists as the Panthers blanked the Skyhawks.

Nishesh Yadav made three saves to earn the shutout.

Tech 1, Chaparral 0 — At Chaparral, Julio Vargas scored on a first-half penalty kick to lead the Roadrunners over the Cowboys.

Tyler Harvey made four saves to get the shutout.

Centennial 5, Spring Valley 1 — At Spring Valley, Mason Panos scored twice, and Pablo Gatti added a goal and an assist as the Bulldogs downed the Grizzlies.

Cobi Hunt and Eric Sanchez each added a goal for Centennial.

Eldorado 4, Cimarron-Memorial 2 — At Cimarron, Andres Lua, Gabriel Pedraza and Chris Perez each had a goal and an assist to lift the Sundevils over the Spartans.

Western 3, Mojave 1 — At Western, Fernando Caro, Franklin Martinez and Isaac Arellano each scored a goal to lift the Warriors to a win over the Rattlers.

Jose Sahagun and Ronaldo Sandoval combined on the shutout.

Del Sol 2, Desert Oasis 1 — At Desert Oasis, Juan Sequeira had a goal and an assist, and the Dragons rallied from a 1-0 halftime deficit to nip the Diamondbacks.

Arbor View 2, Bonanza 1 — At Bonanza, Christian Jaramillo scored twice, including the tie-breaking goal early in the second half, as the Aggies beat the Bengals.

Pahrump Valley 6, The Meadows 0 — At Pahrump, Nolan Toomer and Glen Ivy each scored twice as the Trojans defeated the Mustangs.

Jose Nunez added a goal and an assist, and Aaron Alcarez converted a penalty kick for Pahrump.

Brandon Hastings and Jon Robinson combined on the shutout.

Valley 8, Basic 1 — At Valley, Marco Gonzalez scored four goals and had two assists to help the Vikings to victory over the Wolves.

Eric Sanchez had two goals, and Derian De La Torre and Sebastian Salcedo each added a goal for Valley, which got three assists from Jonathan Cerda and two assists from Alejandro Parra.

Diego Sanchez scored twice, including a goal off the opening touch, and Wilson Estrada added a goal for Desert Pines. 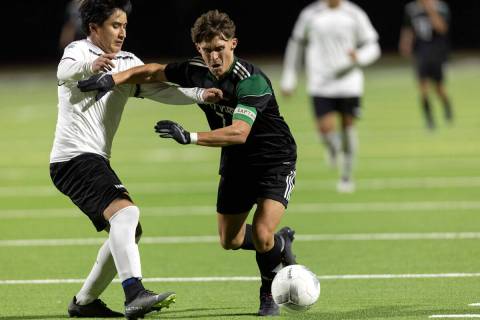