Lisa Tauala had eight kills and two blocks, and Erika Martinez had 22 digs and three aces for Liberty.

Arbor View 3, Cimarron-Memorial 0 — At Cimarron, Alyson Jeeves dished out eight assists, and Sofia Valenzuela had four kills to guide the Aggies to a 25-13, 25-17, 25-19 sweep of the Spartans.

Kaylee Burkhiser had four kills and 12 digs, and Alex Blockovich had three aces and 12 digs for Desert Oasis.

Jill Smith had nine assists, and Taylor Kingsley had six assists for the Trojans.

The Meadows 2-2, Agassi Prep 0-0 — At The Meadows, Dani Otter had eight kills, eight digs and four aces, and Alex Rimoldi added seven kills and four aces to lead the Mustangs to a 25-8, 25-10 win over the Stars in the opener.

Missy Siegel finished with 18 assists and six digs, and Brooke Brennan had six kills and five digs for The Meadows.

In the second match, Brennan had five kills and nine digs, and Siegel tallied 17 assists and three aces as the Mustangs won, 25-11, 25-11. 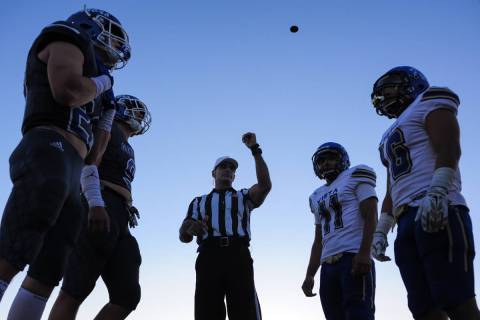