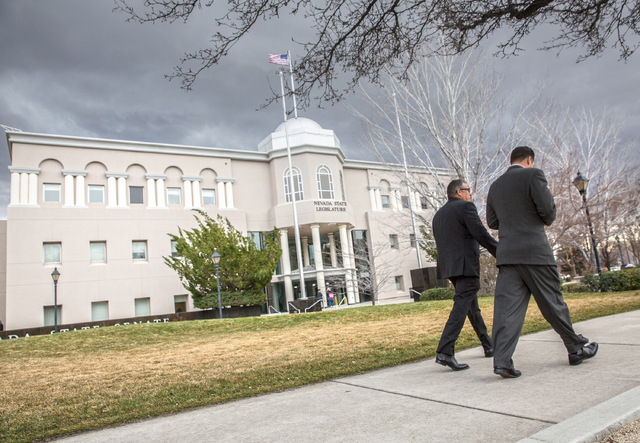 Legislators walk into the Legislative Building during the fourth day of the Nevada Legislative session on Thursday, Feb. 9, 2017, in Carson City. (Benjamin Hager/Las Vegas Review-Journal) @benjaminhphoto

CARSON CITY — Nevada would become the eighth state in the U.S. requiring many private companies to give workers paid sick leave under a bill passed by the Senate on Tuesday.

Businesses with 50 or more employees that have operated in the state for one year would be required to give workers at least 24 hours of sick paid sick leave annually. Workers would become eligible for the benefit after three months on the job.

The Democratic-led Senate passed the bill 12-9 along party lines, with independent Patricia Farley also in favor. It goes next to the Assembly, also controlled by Democrats.

Senate Majority Leader Aaron Ford, D-Las Vegas, and lead bill sponsor, said he worked with local chamber of commerce groups and religious organizations to draft exemptions for small businesses and charitable groups. He said companies would be forced to comply with the proposed law if they employ 50 people for 20 weeks in a two-year period.

“This bill has been an effort in compromise,” Ford said.

Seven U.S. states and Washington, D.C. have enacted laws over the last six years mandating paid sick leave in the private sector, according to the National Conference of State Legislatures.