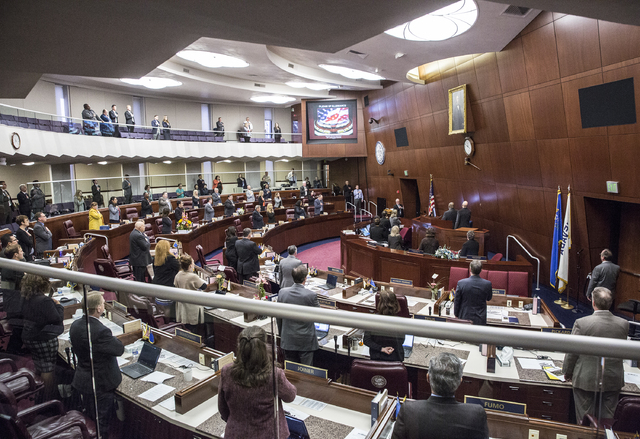 Members of the Nevada Assembly on Thursday, Feb. 9, 2017, at the Legislative Building in Carson City. (Benjamin Hager/Las Vegas Review-Journal) @benjaminhphoto

CARSON CITY — A Nevada Assembly panel passed a measure Tuesday lowering the threshold when prevailing wages must be paid on construction projects on school and higher education campuses.

Assembly Bill 154 was approved by the Assembly Committee on Government Affairs along party lines, with Democrats voting for it and Republicans against. The bill now moves to the full Assembly.

AB154 would reverse a Republican-backed measure passed in 2015 that increased the minimum project amount for when prevailing wages must be paid to $250,000. The current bill would lower that threshold to $100,000. It also would remove a 90 percent prevailing wage rate for school and higher education projects and eliminate an exemption for charter schools.

The issue of prevailing wages has long divided Republicans and Democrats. Republicans argue the rates are artificially inflated because they are based largely on union wages and do not reflect the true cost of construction work. They claim having to pay prevailing wages increases the financial burden on taxpayers.

Democrats say prevailing wages ensure that work is done by qualified tradesmen, and that projects will be built to high construction standards.

A similar bill was previously passed in the Democrat-controlled Senate on a 12-8 vote. That bill also would subject achievement charter schools to prevailing wage requirements, a provision denounced by Republicans as an attempt to undercut key education reforms passed in 2015.