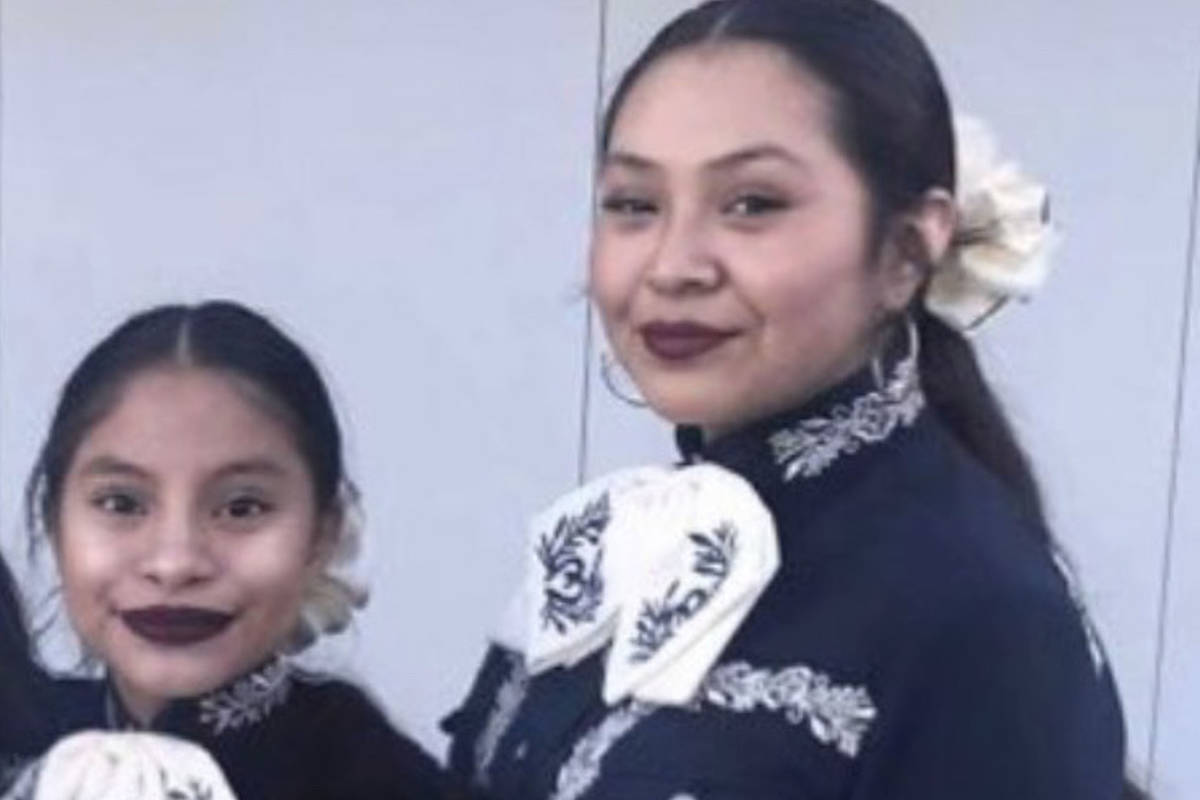 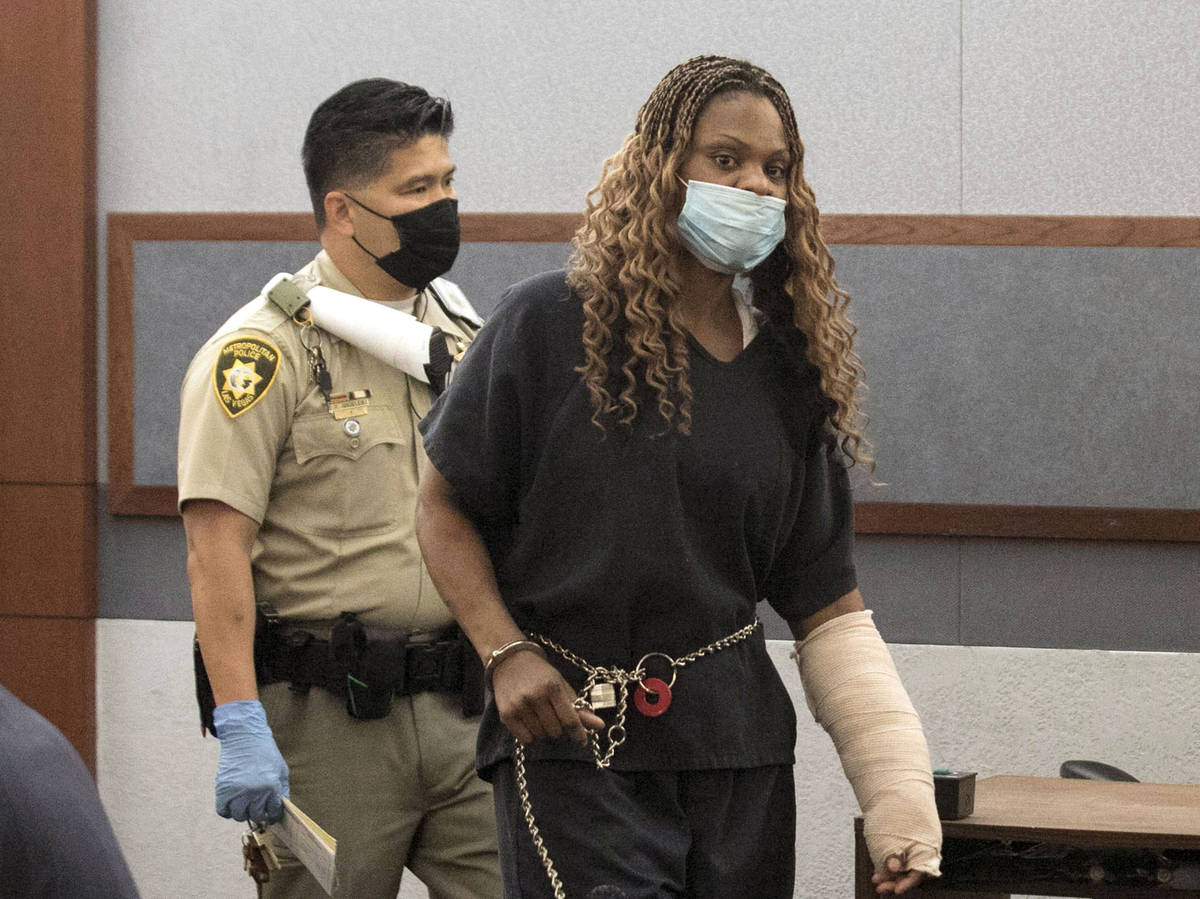 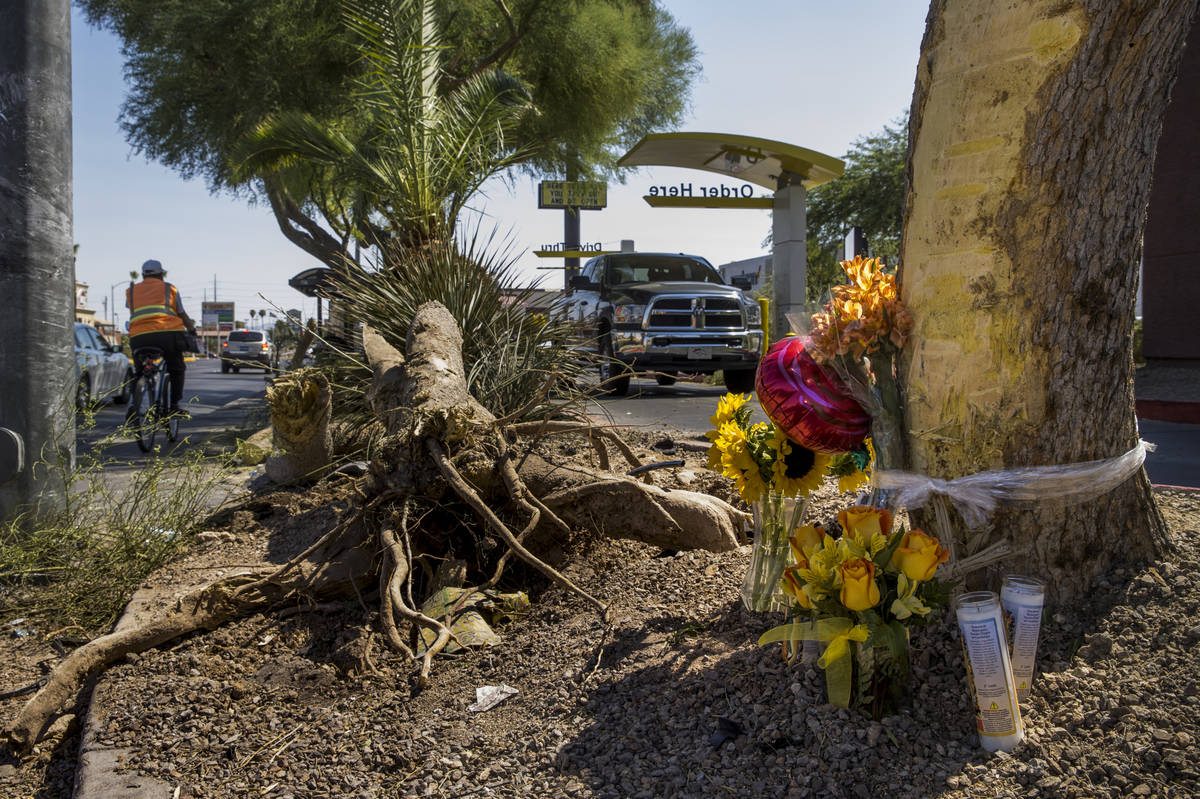 In this Aug. 4, 2020, file photo, a small memorial for two teenagers, Nelly Amaya-Ramirez and Citlali Mora, is seen near the site they were struck by a vehicle and killed on Aug. 3, while walking in a crosswalk at South Maryland Parkway and East Katie Avenue in Las Vegas. (L.E. Baskow/Las Vegas Review-Journal) @Left_Eye_Image

The 13 child drug deaths in Clark County in 2020 represented a 550 percent increase over the previous year, according to coroner data.

The figure includes nine teenagers who died of a fentanyl overdose, according to data from the Clark County coroner’s office. The youngest, a 4-month-old girl, died in August from drug toxicity from methamphetamine.

Myla Byrne, a 19-month-old who died of heroin, fentanyl and acetyl fentanyl intoxication, was one of only two minors to die from drug intoxication in 2019.

As for adults, the county reported nearly three times as many fentanyl deaths last year. Fentanyl, a synthetic opioid, was the cause of death for at least 181 people in 2020, compared with 64 people in 2019. Overall, the coroner investigated at least 561 drug overdoses last year.

While the number of suicides in the county declined to 397 from 432, suicides among children increased. Fifteen children died by suicide in 2020 compared with 10 the year before. The youngest in 2020 was an 8-year-old Las Vegas boy.

Justine Patai, a psychologist specializing in trauma, said people who are genetically predisposed to mental illness typically show symptoms between 15 and 25 years old, but the symptoms can be brought on by major life stress, which many people faced in 2020.

“The Clark County School District does have some counselors, but the majority of them are guidance counselors,” Patai said, citing how busy local psychologists are. “They’re not equipped to handle this. We also have a lot of people that won’t take kids (as clients) because it’s very hard to work with kids over video session.”

Impact of a classmate’s death

Patai said she predicts many students will have traumatic experiences when they return to school if they discover a classmate has died.

At least six teenagers were involved in fatal vehicle crashes last year, including Citlali Mora and Nelly Amaya-Ramirez, two Del Sol High School students who were fatally struck by a car Aug. 3. The driver, 39-year-old Ebone Whitaker, was sentenced in November to 10 to 25 years in prison after pleading guilty to one county of DUI resulting in death and one count of reckless driving, court records show.

“A lot of them, it’s almost like it’s not real, but when they go back to school and these people aren’t there, it’ll hit them,” she said. “It makes the death more traumatic and harder to get through the grief process.”

“Child death and child mental health are directly related to parents’ mental health,” said Oscar Sida, a local psychotherapist and clinical care professional. “If the adult is not doing well, the children are high risk for mental health disorders.”

Sida, a human services professor at Great Basin College, said he observed many patients falling back into their natural coping mechanisms to handle 2020. Patients often relapsed with drugs, alcohol or other addictions. He said he worries about today’s children who live with parents who still stigmatize going to therapy and don’t have methods to keep their children mentally healthy while they’re learning from home.

“Take your kids out and go and be social with them,” he suggested. “Become a closer, tighter-knit family. We’ll play together, do crafts, have face time together. A lot of time parents are busy, and they have so much responsibility. The most important thing they can do for their own well being is to be with each other.”

The Southern Nevada Health District reported 21,422 deaths in the county in 2020, an increase of 2,911 from 2019, according to data provided by the district. Spokeswoman Jennifer Sizemore warned the total number of deaths is preliminary data because death certificates are still being processed.

The district reported 2,379 deaths from coronavirus in 2020, with the first Clark County death being announced in March.

Of all of the deaths in the county, the coroner’s office investigated 2,667 cases, a 255-case increase from 2019, according to data provided by the office. The cases ranged from a 1-day-old boy who died naturally of craniorachischisis totalis in a North Las Vegas home.

The oldest was a 98-year-old woman who died in a Las Vegas bedroom from atherosclerotic cardiovascular disease.

Most of the cases involved Nevada residents, but dozens of Californians and Arizona residents died in the county, as well as a handful of Oregon, Washington and Utah residents. A 22-year-old Parisian woman died in February from blunt force injuries after she was struck near Charleston Boulevard and Grand Central Parkway, according to the coroner’s office.

The coroner investigates only deaths that may not be natural, according to county spokesman Dan Kulin. He said people who die alone in their home, in a car crash or by suicide would all be investigated by the coroner’s office. A 46-year-old man from Boulder City became a coroner case in August after he died from electrocution. The manner of death was ruled an accident.

“The coroner’s office does not investigate deaths where someone passed away under the care of a doctor while being in the hospital,” Kulin said.