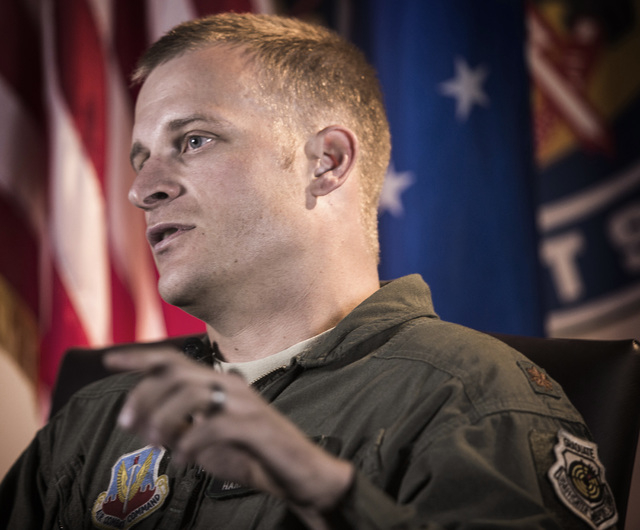 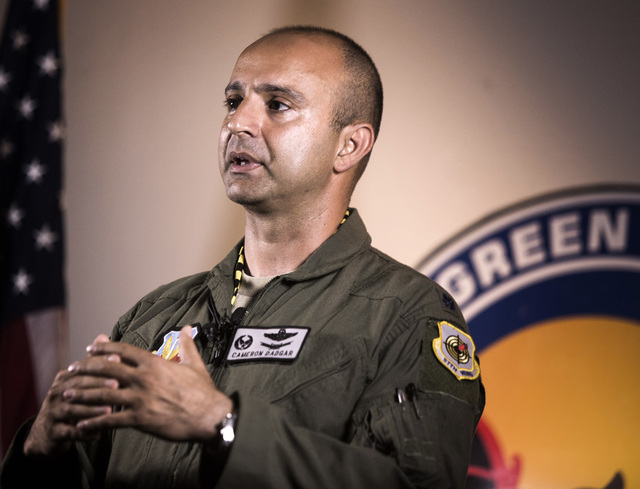 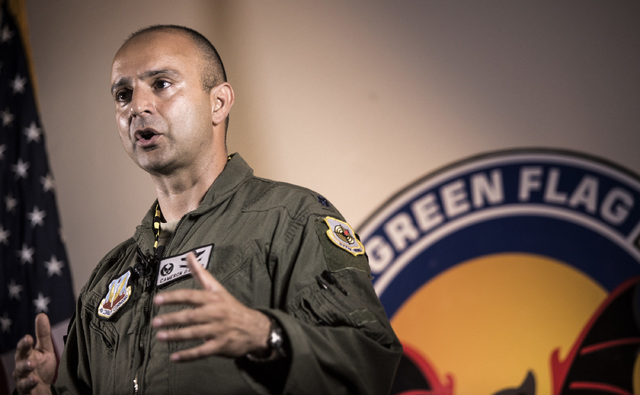 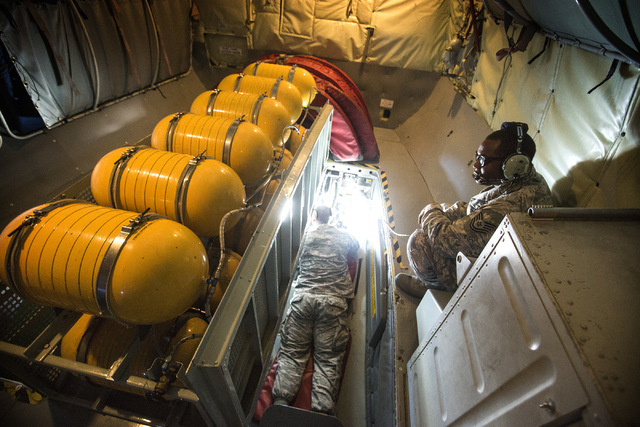 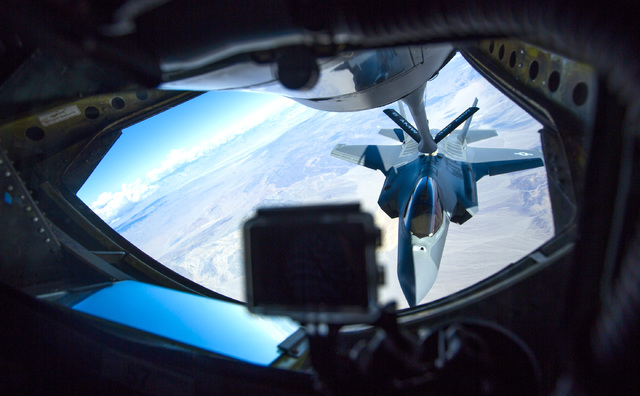 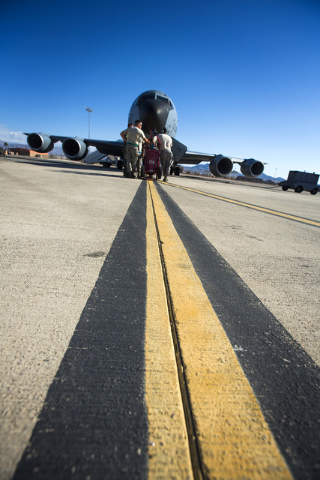 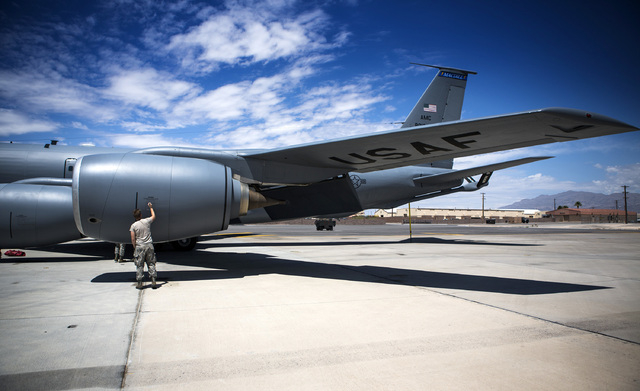 An airman from the 91st Air Refueling Squadron from MacDill AFB does a post flight check on a KC-135 Stratotanker Wednesday, June 10, 2015 at Nellis Air Force Base. The squad participated in Green Flag-West. Follow Jeff Scheid on Twitter @jlscheid (Jeff Scheid/Las Vegas Review-Journal) 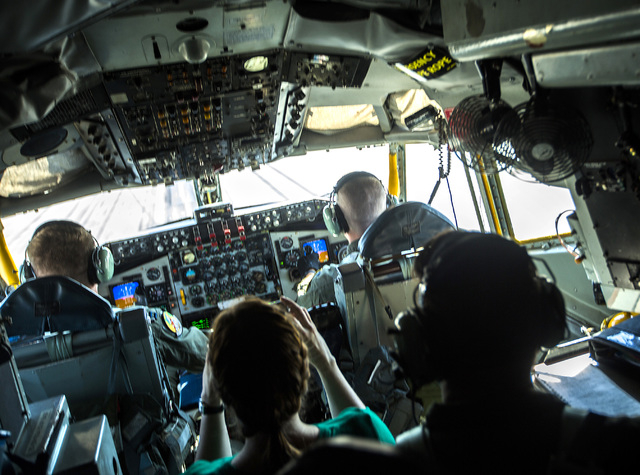 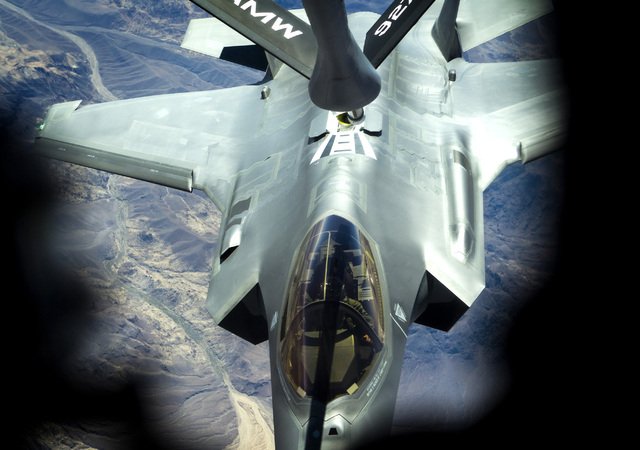 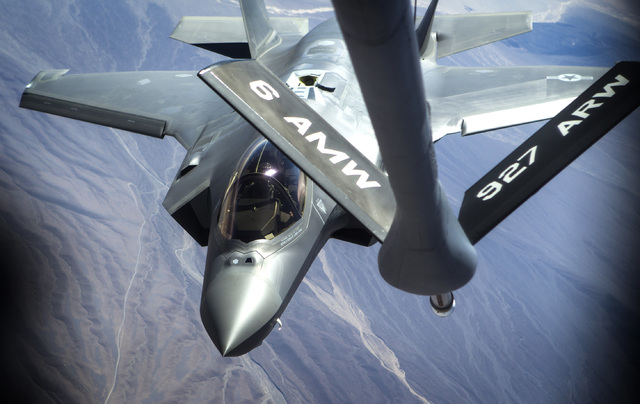 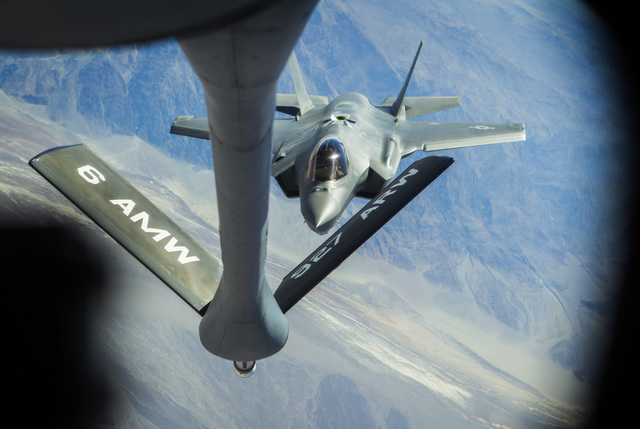 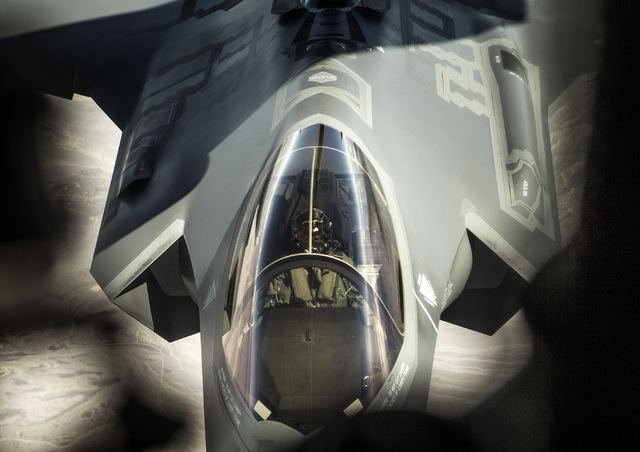 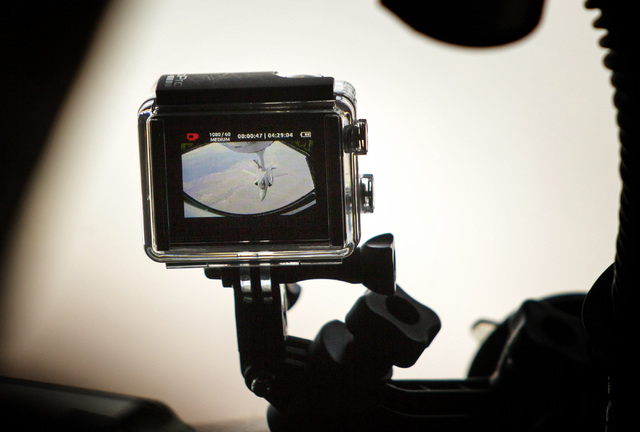 An image of F-35 Lightning II from the 31st Test and Evaluation Squadron is seen from a video camera during a refueling exercise over Fort Irwin,Cal. on Wednesday, June 10,2015. This was the first public refueling of the air force's newest airplane. Follow Jeff Scheid on Twitter @jlscheid (Jeff Scheid/Las Vegas Review-Journal) 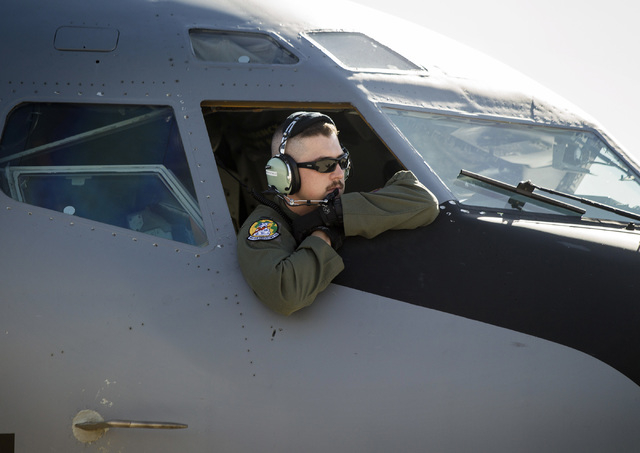 1st L. Ryan Merrifield from the 91st Air Refueling Squadron leans out the cockpit of a KC-135 Stratotanker before take off at Nellis Air Force Base on Wednesday, June 10, 2015. The squad from MacDill AFB participated in Green Flag-West. Follow Jeff Scheid on Twitter @jlscheid (Jeff Scheid/Las Vegas Review-Journal) 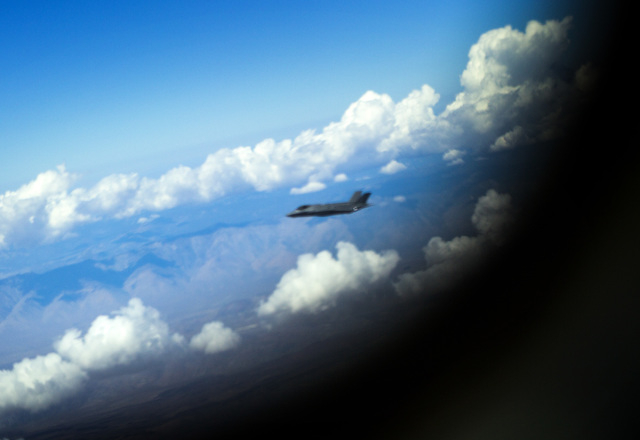 A F-35 Lightning II from the 31st Test and Evaluation Squadron taken from a KC-135 Stratotanker Wednesday, June 10,2015 during a refueling exercise over Fort Irwin,Cal. This was the first public refueling of the air force's newest airplane. Follow Jeff Scheid on Twitter @jlscheid (Jeff Scheid/Las Vegas Review-Journal) 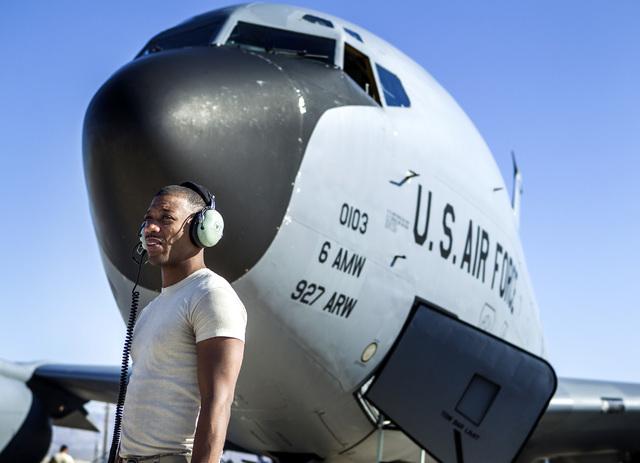 For a jet that can fly from Las Vegas to Los Angeles in 27 minutes at nearly 1 1/2 times the speed of sound, they had to slow down to 450 mph to match the speed of a KC-135 Stratotanker in order to get gas from its boom while cruising at 22,000 feet above Death Valley, Calif.

“If we’re doing the same speed, it feels very comfortable and very controlled,” said Maj. Christopher “Harpoon” Laird, a former A-10 Thunderbolt pilot who now flies F-35s for the 422nd Test and Evaluation Squadron at Nellis.

So what’s going through his mind?

“I’ll give you the honest answer. I’m about to hit an airplane. I don’t want to hit an airplane. So that’s what you’re really thinking,” he said, describing how he tries to hold the jet “in the sweet spot” for the boom operator to position the nozzle in the “basket,” or fuel port.

“There’s a lot of focus to maintain that position,” said Laird, 34, of Las Vegas.

“You want to be as stable as you can be,” he said. “It seems like it would be stressful, but when you’re up there you’ve got to tell yourself to take a deep breath, wiggle your fingers, don’t just clinch the stick or the throttle, and don’t hit that airplane because you’re really close to it.”

On Wednesday, Airman 1st Class Christoper Cannon lay in a prone position with his chin resting on a pad while he controlled the fuel pipe, or boom, with a joy stick, extending it 28 feet to reach the top of the F-35.

“I’m making sure that he is nice and stable, coming in slow. I’m real gentle on the controls making sure everything goes nice and smoothly and make a safe connection and give him the gas,” said Cannon, of the 91st Air Refueling Squadron at MacDill Air Force Base, Fla.

“They have some of the best pilots in the world flying these things. So that’s a good thing,” he said.

The two F-35s in this Green Flag-West exercise were from the 31st Test and Evaluation Squadron at Edwards Air Force Base, Calif.

It was the first time that F-35s have played a major role in the exercise that began May 29 and runs through Friday. It is designed to put an assortment of military aircraft in a battle scenario to support thousands of soldiers training at Fort Irwin, Calif.

It was also the first time commanders held a media day to show F-35s refueling and participating in a Green Flag exercise, said Lt. Col. Cameron “Glover” Dadgar, commander of the 549th Combat Training Squadron at Nellis Air Force Base.

He downplayed the notion that the Air Force was showcasing the $100-million jet — the Pentagon’s most expensive weapons platform — at a time when Congress is saddled with decisions on defense spending cuts to meet budget control mandates.

“There are a lot of people working very hard to get our combat warriors ready not just for today’s fight but for tomorrow’s fight and they deserve that exposure,” he said.

“I think the public deserves to know that their military, no matter what the politics are around about what’s going on, that there are folks in uniform working very, very hard to get ready no matter what happens around the world. And they’re doing the best with what resources they have available,” he said.

Dadgar, 43, an F-16 pilot and Purdue University engineering graduate, noted that the F-35 “is one of those resources and it’s doing outstanding.”

He said the lessons learned from this Green Flag “are wide and varied. Quite honestly, a lot of it has to do with how the pilots perform as opposed to how the airframe performs.”

Where the F-35 fits in a close air support role for troops on the ground will become more clear as it clears hurdles for initial operations capability certification in the summer of 2016.

So far in Green Flag-West, pilots have demonstrated its superior sensor capability for detecting adversary threats on the surface and in the air, serving as eyes and ears for ground combat controllers to call in airstrikes.

The exercise includes about 5,000 U.S. military personnel with land, sea and ground forces facing a generic “near-peer, very willing” enemy with resources and capabilities comparable to China or Russia.

The F-35A can fire air-to-air missiles, drop GPS and laser-guided bombs, and has a 25 mm cannon. Cameras on the aircraft give pilots a 360-degree view on their helmet visors.

While Dadgar said no F-35 has been shot down based on simulated attack reviews in this exercise, F-35 cannons have not been fired, awaiting future tests, and live munitions have not been dropped in close-air-support scenarios.

Critics, too, have argued that A-10s with their ability to swoop with rapid fire cannons are better suited for fighting today’s battles with Islamic State militants in the Middle East.

Laird, the former A-10 pilot who has flown sorties in Afghanistan and Iraq said he still loves the A-10 but “just because you have an F-35 or you don’t have an F-35 doesn’t change the fact that a war could occur. So my understanding of Green Flag is they’re trying to say, ‘This is our near-peer adversary, these are the tactics we see them using, the equipment that we see they have, and we’re going to try to simulate that the best we can.’”

Lockheed is developing three models of the aircraft for the U.S. military and 11 other nations. U.S. officials say the $391 billion weapons program has met or exceeded performance and cost targets since a major restructuring in 2011.