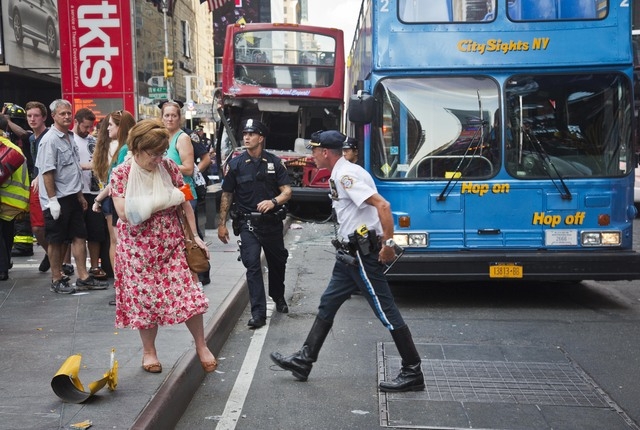 A woman, her arm bandaged and in a sling, leaves after being treated at the scene of a traffic accident apparently involving two double-decker tour buses in New York's Times Square, Tuesday Aug. 5, 2014. The Fire Department of New York says 11 people suffered injuries, three of them seriously, but none of the injuries is believed to be life-threatening. (AP Photo/Bebeto Matthews) 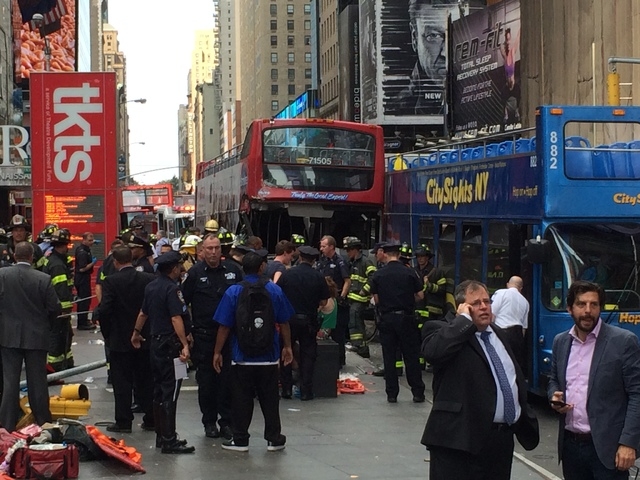 In this photo provided by tracedinc.com, people look as emergency personnel respond to a bus crash on Tuesday, Aug. 5, 2014, in New York City's Times Square. The accident occurred around 47th Street and Seventh Avenue in Manhattan. (AP Photo/tracedinc.com) 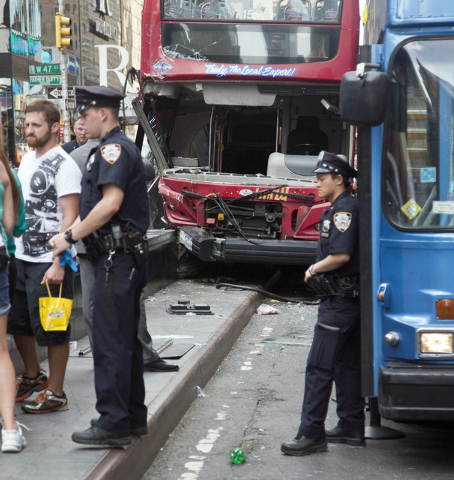 Police guard the scene of a traffic accident involving two double-decker tour buses in New York City's Theater District, Tuesday Aug. 5, 2014. The Fire Department of New York says 11 people suffered injuries from the accident, three of them seriously, but none of the injuries are believed to be life-threatening. (AP Photo/Bebeto Matthews) 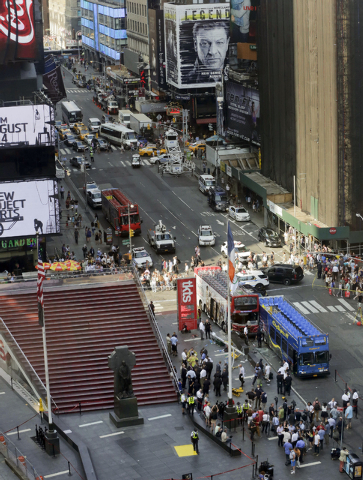 Two double-decker tour buses sit at the corner of 47th Street and 7th Avenue in Times Square after colliding, Tuesday, Aug. 5, 2014, in New York. Fire department officials said that around 13 people were injured but none of the injuries were believed to be life-threatening. (AP Photo/Julie Jacobson)

Tourist Cara McCaskill, of Winnipeg, Canada, saw the scene of the accident moments after it happened as she walked out of her hotel.

“I saw fire trucks trying to get through all the crazy traffic,” the 16-year-old said. “And I saw ambulances and blood on the ground.”

None of the injuries was believed to be life-threatening, fire department officials said.

The accident happened at 47th Street and Seventh Avenue in Manhattan, an area teeming with tourists near the TKTS discount Broadway ticket booth. A stretch of Seventh Avenue was shut down for hours.

Witnesses said a Gray Line tour bus rolled into the area at a high speed.

Fire department spokesman Jim Long said the bus then crashed into the other bus. A yellow traffic light toppled, its metal pole lying on a pedestrian strip. Long declined to give other details pending an investigation.

Fire Deputy Chief Roger Sakowich said, “We are very, very fortunate there weren’t many more injuries. The size of that light pole with the street light on it could have done a lot more damage. We’re very lucky.”

An Irish tourist, Rose Cantillon, was nearby but wasn’t injured.

“I was sitting on a bench, and I turned around and heard screaming, and I just ran,” she said.