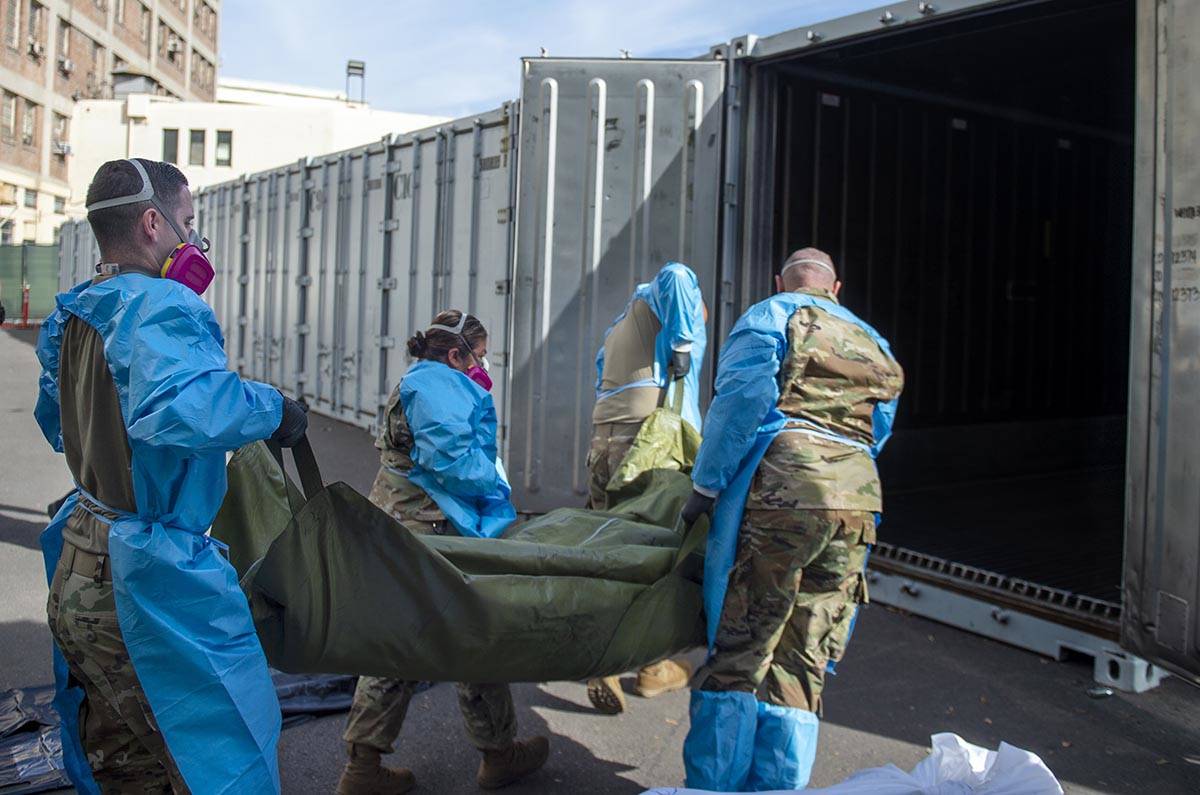 In a Jan. 12, 2021, photo provided by the Los Angeles County Department of Medical Examiner-Coroner, National Guard members assisting with processing COVID-19 deaths, placing them into temporary storage at the medical examiner-coroner's office in Los Angeles. The seven-day rolling average of daily deaths is rising in 30 states and the District of Columbia, and on Monday, Jan 18, 2021, the U.S. was approaching 398,000, according to data collected by Johns Hopkins University, by far the highest of any country in the world. (Los Angeles County Department of Medical Examiner-Coroner via AP, File) 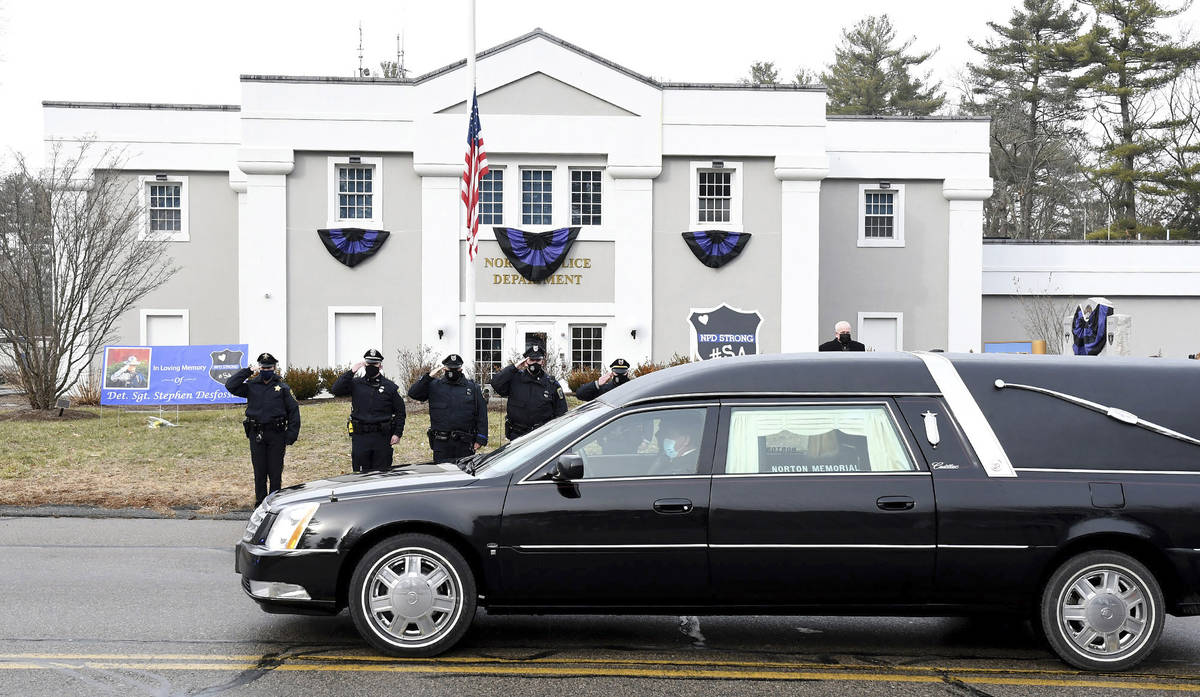 FILE - In this Thursday, Jan. 14, 2021. file photo, Norton, Mass. police salute as a hearse carrying colleague Det. Sgt. Stephen Desfosses briefly stops in front of the police station. Desfosses, 52, a local police officer for 32 years, died of the coronavirus Wednesday in Boston with members of his family by his side, Police Chief Brian Clark said in a statement. Coronavirus deaths are rising in nearly two-thirds of American states as a winter surge pushes the overall toll toward 400,000 amid warnings that a new, highly contagious variant is taking hold. (Mark Stockwell/The Sun Chronicle via AP)

NEW YORK — Coronavirus deaths are rising in nearly two-thirds of American states as a winter surge pushes the overall toll toward 400,000 amid warnings that a new, highly contagious variant is taking hold.

Referring to new versions detected in Britain, South Africa and Brazil, Cuomo said: “Stop those people from coming here…. Why are you allowing people to fly into this country and then it’s too late?”

The U.S. government has already curbed travel from some of the places where the new variants are spreading — such as Britain and Brazil — and recently it announced that it would require proof of a negative COVID-19 test for anyone flying into the country.

But the new variant seen in Britain is already spreading in the U.S., and the Centers for Disease Control and Protection has warned that it will probably become the dominant version in the country by March. The CDC said the variant is about 50% more contagious than the virus that is causing the bulk of cases in the U.S.

While the variant does not cause more severe illness, it can cause more hospitalizations and deaths simply because it spreads more easily. In Britain, it has aggravated a severe outbreak that has swamped hospitals, and it has been blamed for sharp leaps in cases in some other European countries.

As things stands, many U.S. states are already under tremendous strain. The seven-day rolling average of daily deaths is rising in 30 states and the District of Columbia, and on Monday the U.S. death toll surpassed 398,000, according to data collected by Johns Hopkins University — by far the

highest recorded death toll of any country in the world.

One of the states hardest it during the recent surge is Arizona, where the rolling average has risen over the past two weeks from about 90 deaths per day to about 160 per day on Jan. 17.

Rural Yuma County — known as the winter lettuce capital of the U.S. — is now one of the state’s hot spots. Exhausted nurses there are now regularly sending COVID-19 patients on a long helicopter ride to hospitals in Phoenix when they don’t have enough staff. The county has lagged on coronavirus testing in heavily Hispanic neighborhoods and just ran out of vaccines.

But some support is coming from military nurses and a new wave of free tests for farmworkers and the elderly in Yuma County.

A third of vaccine doses injected

Amid the surge, a vast effort is underway to get Americans vaccinated, but the campaign is off to an uneven start. According to the latest federal data, about 31.2 million doses of vaccine have been distributed, but only about 10.6 million people have received at least one dose.

In California, the most populous state, counties are pleading for more vaccine as the state tries to reduce a high rate of infection that has led to record numbers of hospitalizations and deaths.

Although the state last week said anyone age 65 and older can start receiving the vaccine, Los Angeles County and some others have said they don’t have enough to inoculate so many people. They are concentrating on protecting health care workers and the most vulnerable elderly in care homes first.

On Monday, the superintendent of the Los Angeles Unified School District sent a letter asking for state and county authorization to provide vaccinations at schools for staff, local community members — and for students once a vaccine for children has been approved.

The death rate from COVID-19 in Los Angeles County — an epicenter of the U.S. pandemic — works out to about one person every six minutes. On Sunday, the South Coast Air Quality Management District suspended some pollution-control limits on the number of cremations for at least 10 days in order to deal with a backlog of bodies at hospitals and funeral homes.

In other areas of the country, officials are working to ensure that people take the vaccine once they’re offered it amid concerns that many people are hesitant to take it. Maryland Gov. Larry Hogan, in a livestreamed event on Martin Luther King Jr. Day, received a shot, and urged other Marylanders to do likewise.

“We’re all looking forward to the day we can take off and throw away our masks … when we can go out for a big celebration at our favorite crowded restaurant or bar with all our family and friends,” Hogan said. “The only way we are going to return to a sense of normalcy is by these COVID-19 vaccines.”

New York in ‘a footrace’

In New York, Cuomo said the state, which has recorded more than 41,000 deaths, as “in a footrace” between the vaccination rate and the infection rate. He said federal authorities needed to improve their efforts to get vaccine doses distributed swiftly.

The World Health Organization chief on Monday lambasted drugmakers’ profits and vaccine inequalities, saying it’s “not right” that younger, healthier adults in some wealthy countries get vaccinated against COVID-19 before older people or health care workers in poorer countries.

Director-General Tedros Adhanom Ghebreyesus began WHO’s executive board meeting by lamenting that one poor country received a mere 25 vaccine doses while over 39 million doses have been administered in nearly 50 richer nations.

“Just 25 doses have been given in one lowest income country — not 25 million, not 25,000 — just 25. I need to be blunt: The world is on the brink of a catastrophic moral failure,” Tedros said. He did not specify the country, but a WHO spokeswoman identified it as Guinea.

Tedros nonetheless hailed the scientific achievement behind rolling out coronavirus vaccines less than a year after the pandemic erupted in China.

“Vaccines are the shot in the arm we all need, literally and figuratively,” Tedros said. “But we now face the real danger that even as vaccines bring hope to some, they become another brick in the wall of inequality between the worlds of the world’s haves and have-nots.”