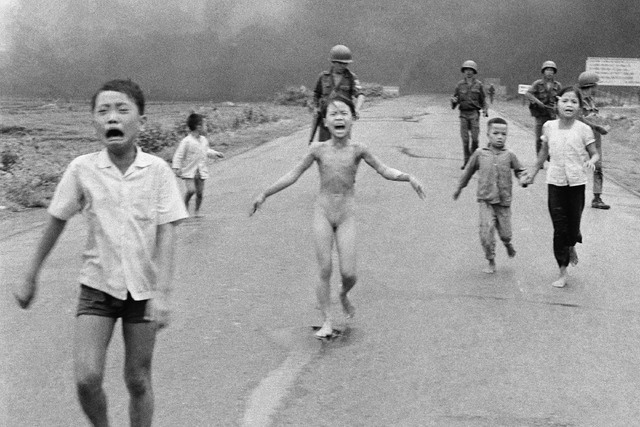 The iconic 1972 Vietnam War photograph of Kim Phuc running naked down a road after being burned in a napalm attack. Recently, Norwegian author Tom Egeland shared the photo on Facebook. But Facebook's moderators removed the Pulitzer Prize-winning image because of the site's nudity policy. (Nick Ut) 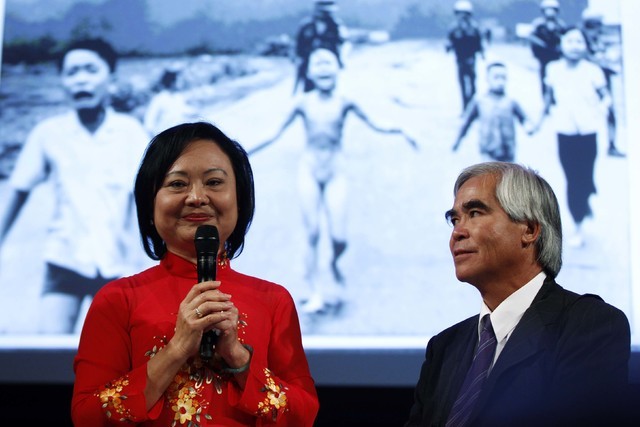 Photojournalist Nick Ut, right, and Kim Phuc attend a photography conference in 2012. Ut took the iconic 1972 Vietnam War photograph (seen in the background) of Phuc running down a road after being burned in a napalm attack. (Ina Fassbender/Reuters)

Facebook Inc. has reversed its decision to remove Nick Ut’s famous “napalm girl” photo from the Vietnam War after an attack from the Norwegian prime minister, who said the photo “shaped world history.”

Facebook initially said the picture, which depicts a nine-year-old naked girl running from a napalm attack, violated its community standards against nudity. “In this case, we recognize the history and global importance of this image in documenting a particular moment in time,” the company said in a statement.

The picture — one of a handful of images that changed how people think about war — shows 9-year-old Kim Phuc nude and running from napalm, her skin burning. It defined the horrors of the Vietnam War.

Norwegian author Tom Egeland had the lasting power of Ut’s work in mind when he shared the photo to Facebook weeks ago. But when Facebook’s moderators saw the Pulitzer Prize-winning image, they saw not its documentary significance or its impact on the world, but a violation of the site’s nudity policy.

Facebook’s moderators removed the photograph from Egeland’s page, along with its accompanying text. His account was suspended for 24 hours after he shared an interview with Phuc criticizing Facebook’s decision to censor this image, he said.

But that was just the beginning of the incredible outrage at Facebook that has swept across Norway in recent days, becoming the subject of an open letter to Mark Zuckerberg from Norway’s largest newspaper, and rising all the way up to the country’s prime minister.

Facebook has increasingly found itself under scrutiny for its influential role in the distribution of news across the world. According to Pew, 44 percent of the general population in the U.S. say they get their news from Facebook. While Zuckerberg recently said that Facebook is “a tech company, not a media company,” this incident highlights just how much control the platform can wield over what media its users do (and don’t) see.

“I think you are abusing your power, and I find it hard to believe that you have thought it through thoroughly,” he wrote.

The outrage in Norway escalated when Prime Minister Erna Solberg posted the image to her own Facebook page on Friday, after the publication of Aftenposten’s letter. “Facebook gets it wrong when they censor such pictures. It limits the freedom of speech,” she wrote in an accompanying statement that was translated by Reuters. “I say yes to healthy, open and free debate – online and wherever else we go. But I say no to this form of censorship.”

Solberg’s post, along with the statement, then disappeared from Facebook. A spokesperson for the prime minister’s office confirmed that she “did not remove it” herself from her own page.

Aftenposten ran their direct address letter to Zuckerberg on the front page of their paper. “I am writing this letter to inform you that I shall not comply with your requirement to remove a documentary photography from the Vietnam war made by Nick Ut. Not today, and not in the future,” Hansen wrote.

“The media have a responsibility to consider publication in every single case. This may be a heavy responsibility. Each editor must weigh the pros and cons,” Hansen wrote, “This right and duty, which all editors in the world have, should not be undermined by algorithms encoded in your office in California.”

Hansen reported that Facebook asked the paper to either remove or pixelate Ut’s work from one of its own articles on Wednesday morning, after the paper had reported on Egeland’s suspension from the platform.

“We place limitations on the display of nudity to limit the exposure of the different people using our platform to sensitive content,” the note from Facebook, published alongside Aftenposten’s open letter, reads. “Any photographs of people displaying fully nude genitalia or buttocks, or fully nude female breasts, will be removed.”

“We understand that these limitations will sometimes affect content shared for legitimate reasons, including awareness campaigns or artistic projects, and we apologize for the inconvenience,” Facebook continued.

Instead of pixelating or removing the image as requested, Hansen wrote that Facebook was “restricting my room for exercising my editorial responsibility. This is what you and your subordinates are doing in this case.”