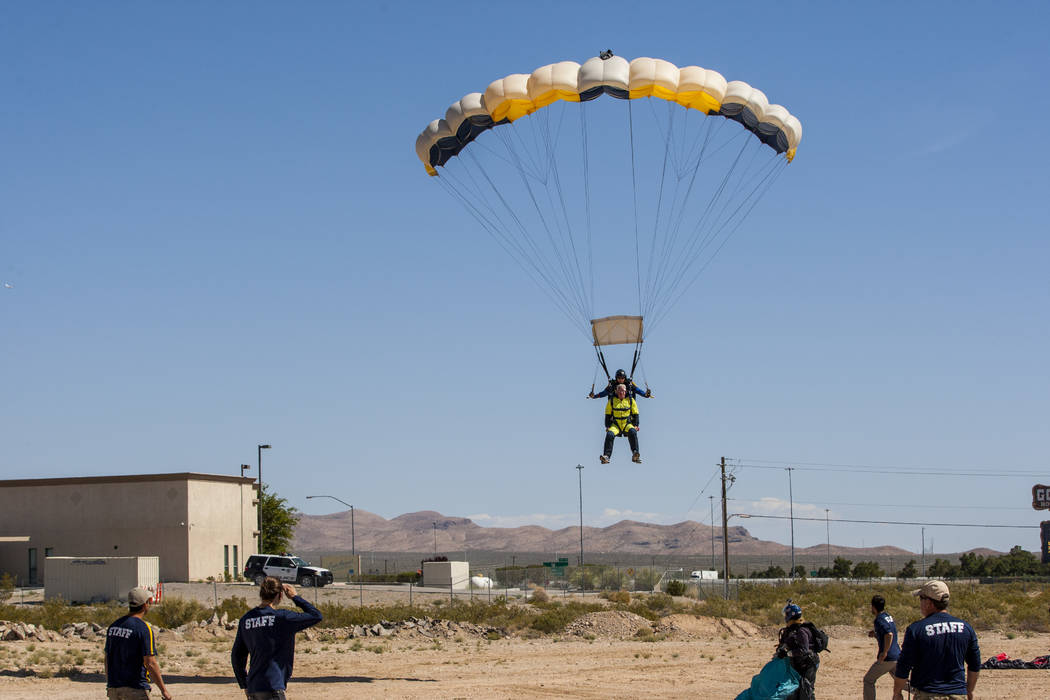 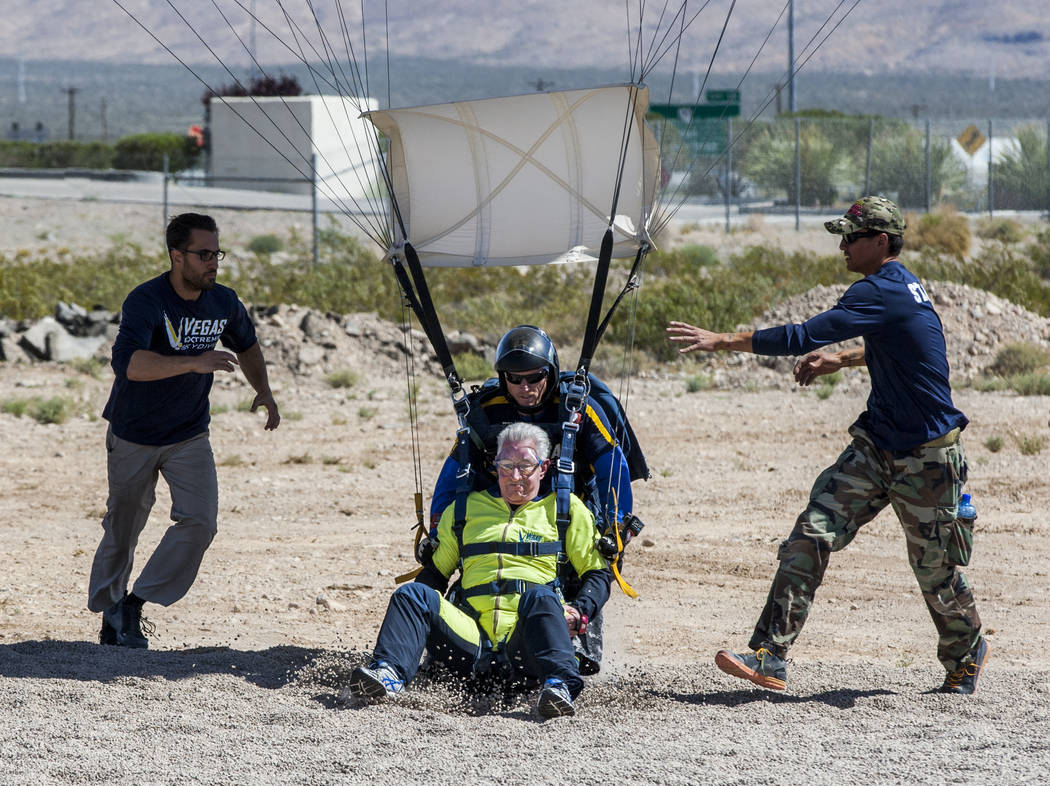 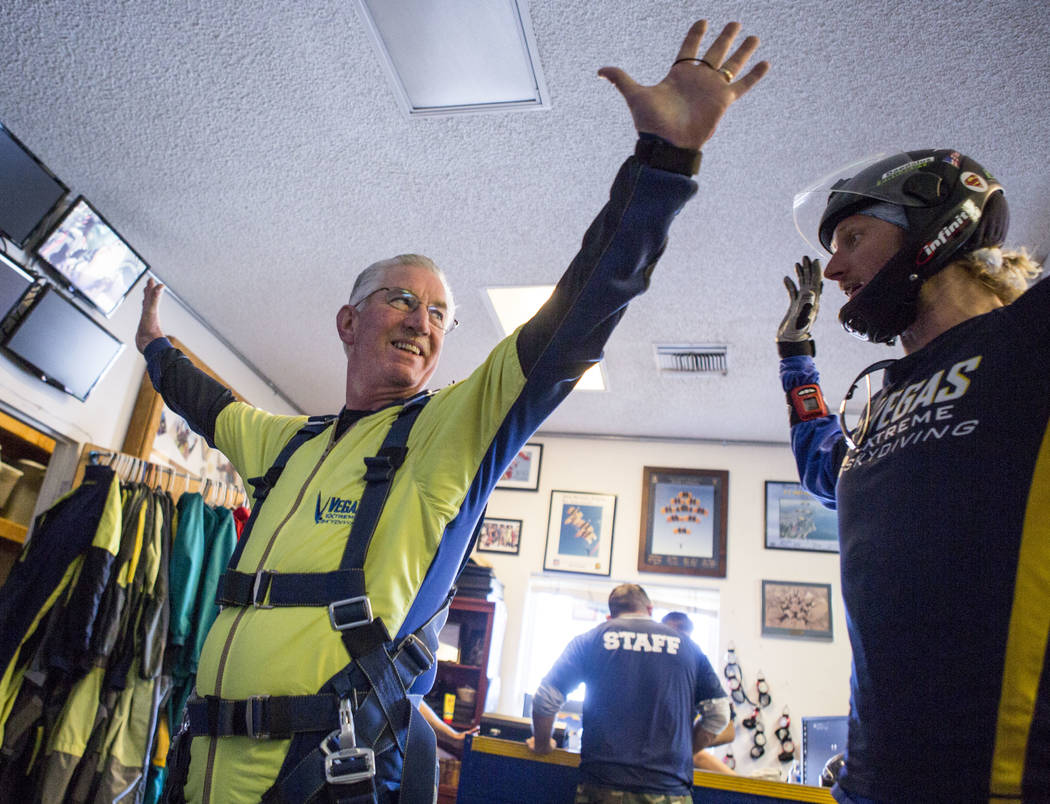 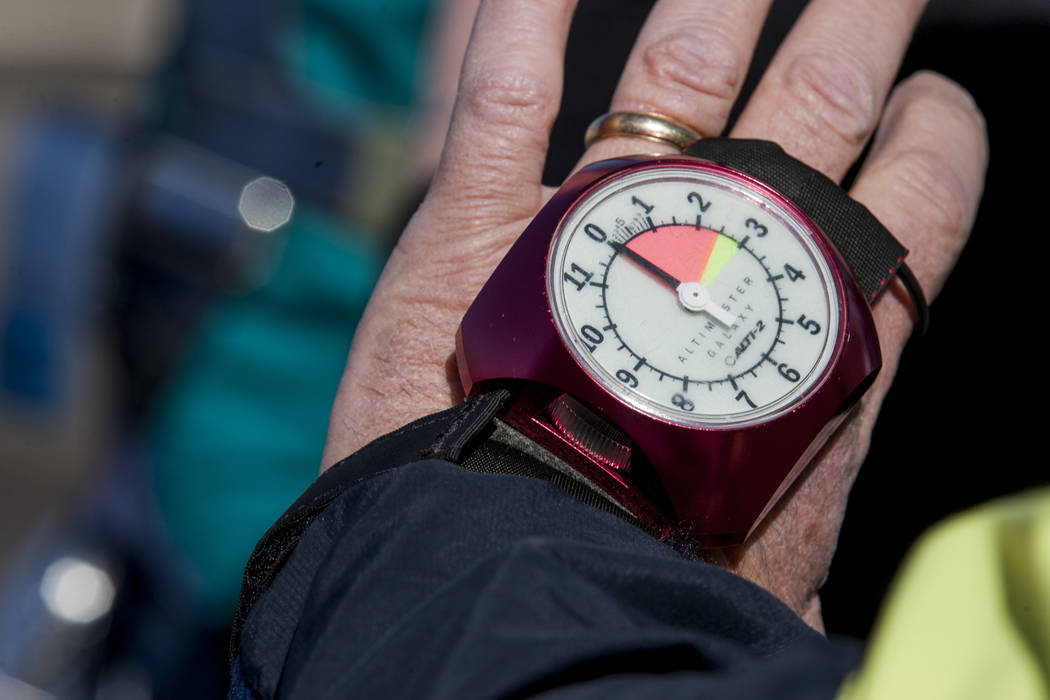 Bill McCrane, who just turned 60, wears an altimeter while preparing to skydive with Vegas Extreme Skydiving at the Jean Sport Aviation Center in Jean on Tuesday, May 16, 2017. Patrick Connolly Las Vegas Review-Journal @PConnPie 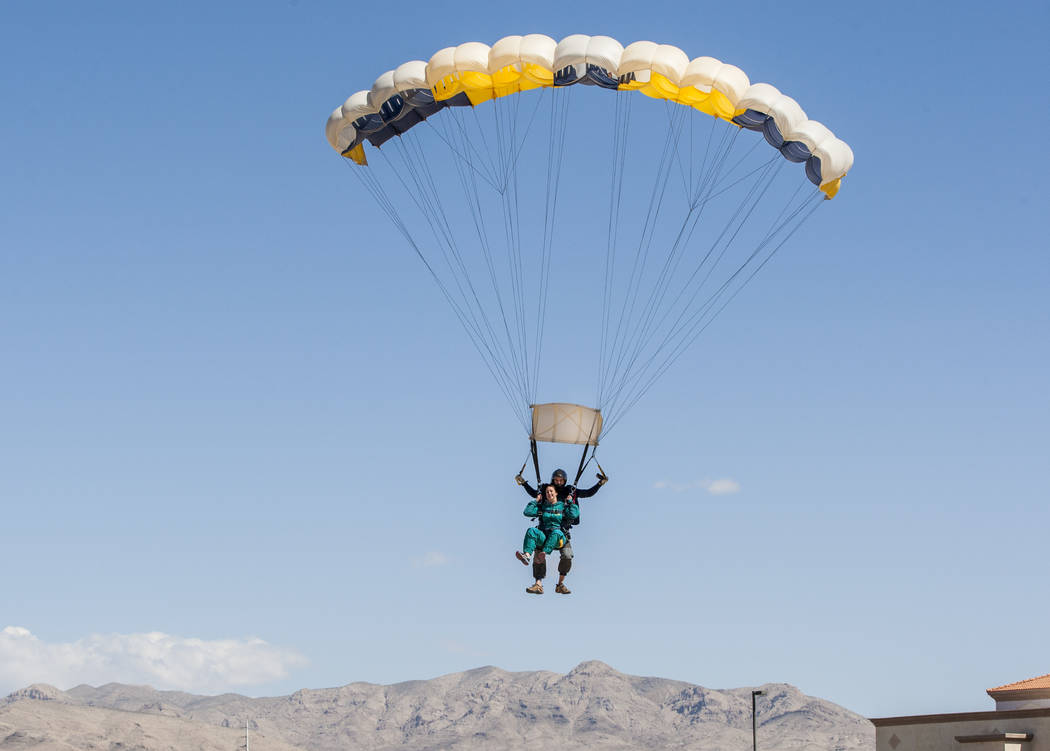 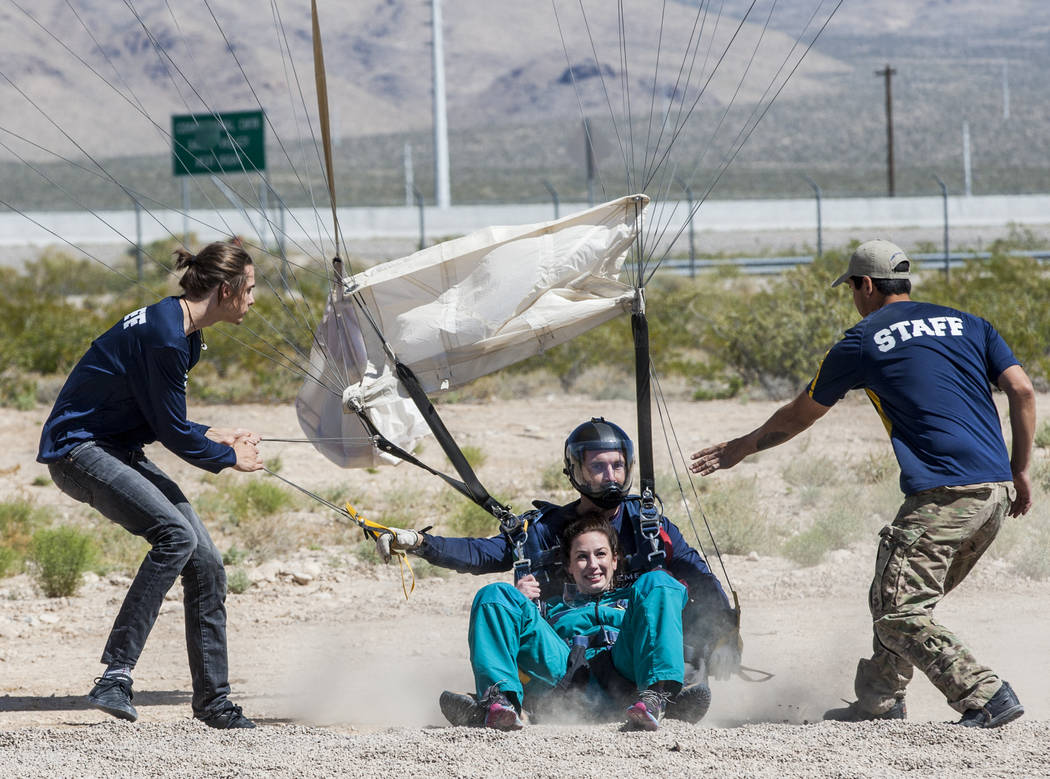 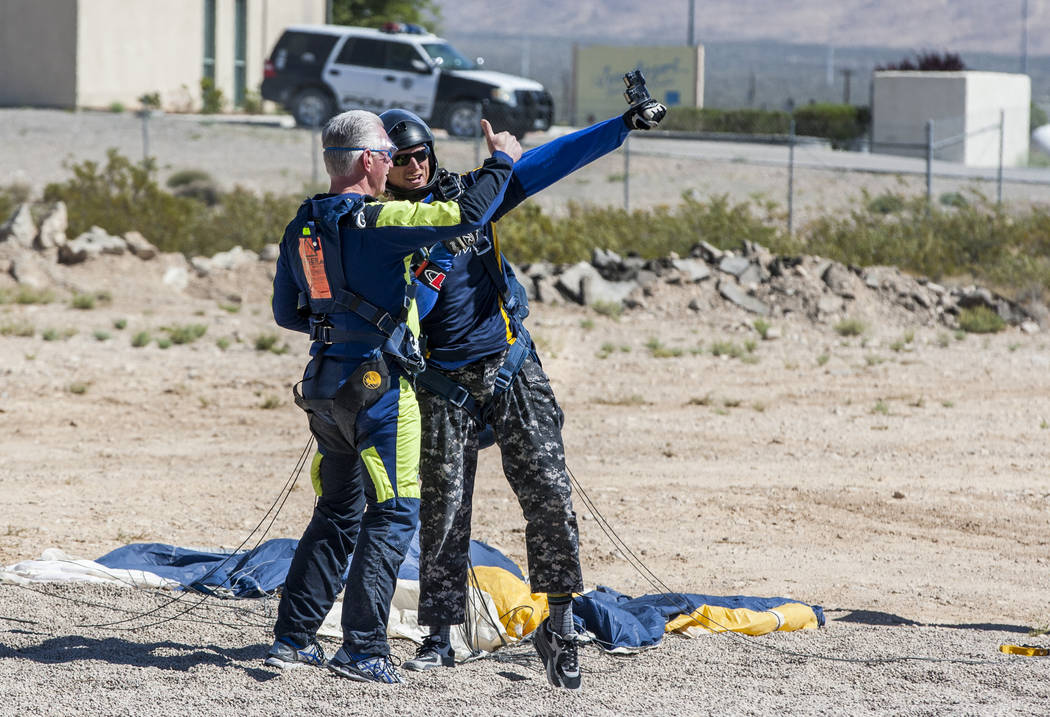 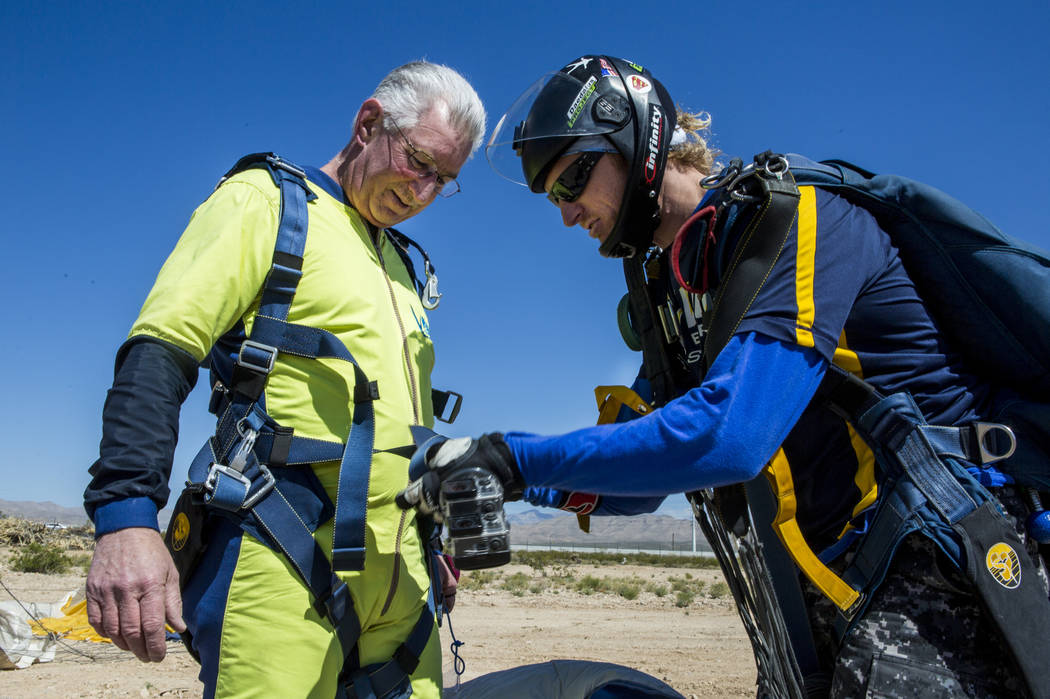 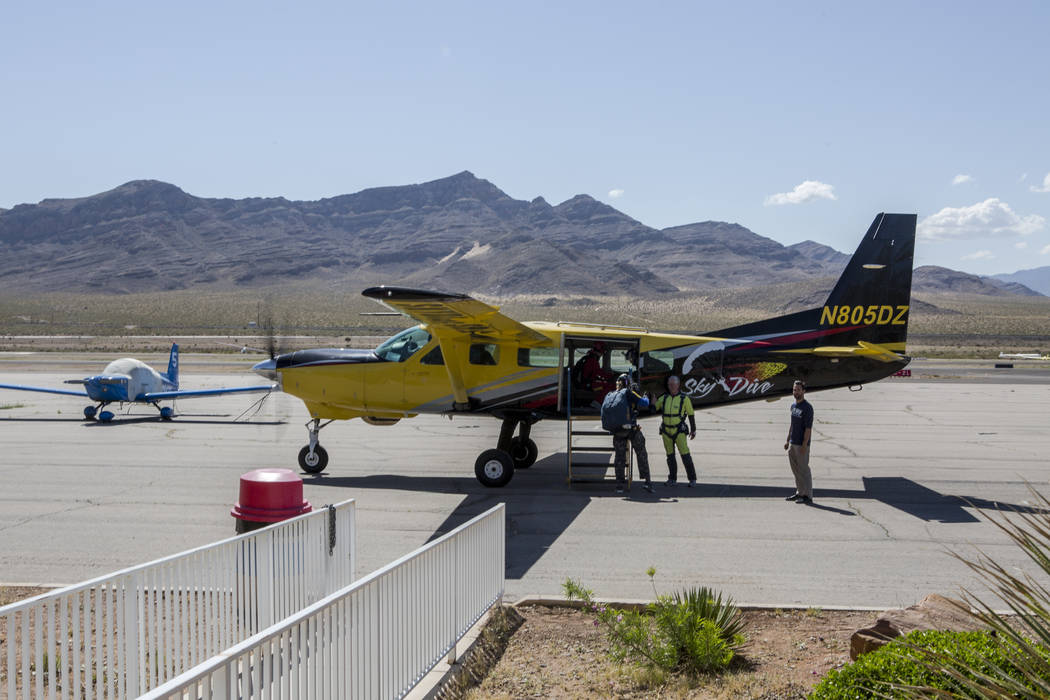 Bill McCrane, who just turned 60, boards a plane to skydive with his daughter, Jessica, with Vegas Extreme Skydiving at the Jean Sport Aviation Center in Jean on Tuesday, May 16, 2017. Patrick Connolly Las Vegas Review-Journal @PConnPie 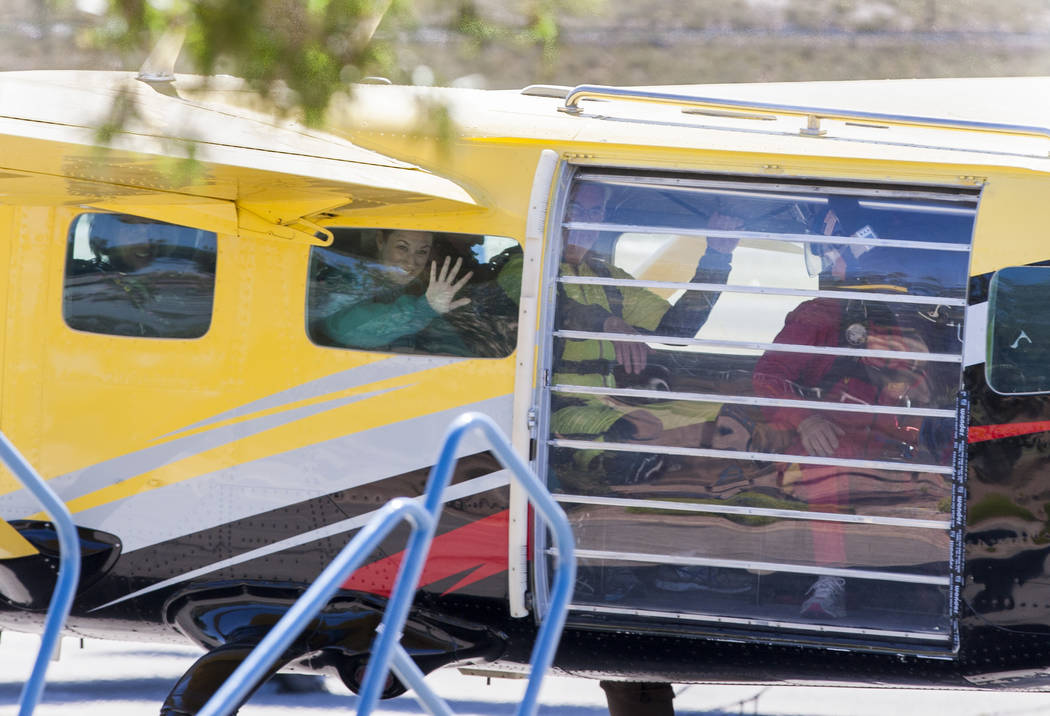 Bill McCrane, who just turned 60, leaves in a plane to skydive with his daughter, Jessica, with Vegas Extreme Skydiving at the Jean Sport Aviation Center in Jean on Tuesday, May 16, 2017. Patrick Connolly Las Vegas Review-Journal @PConnPie 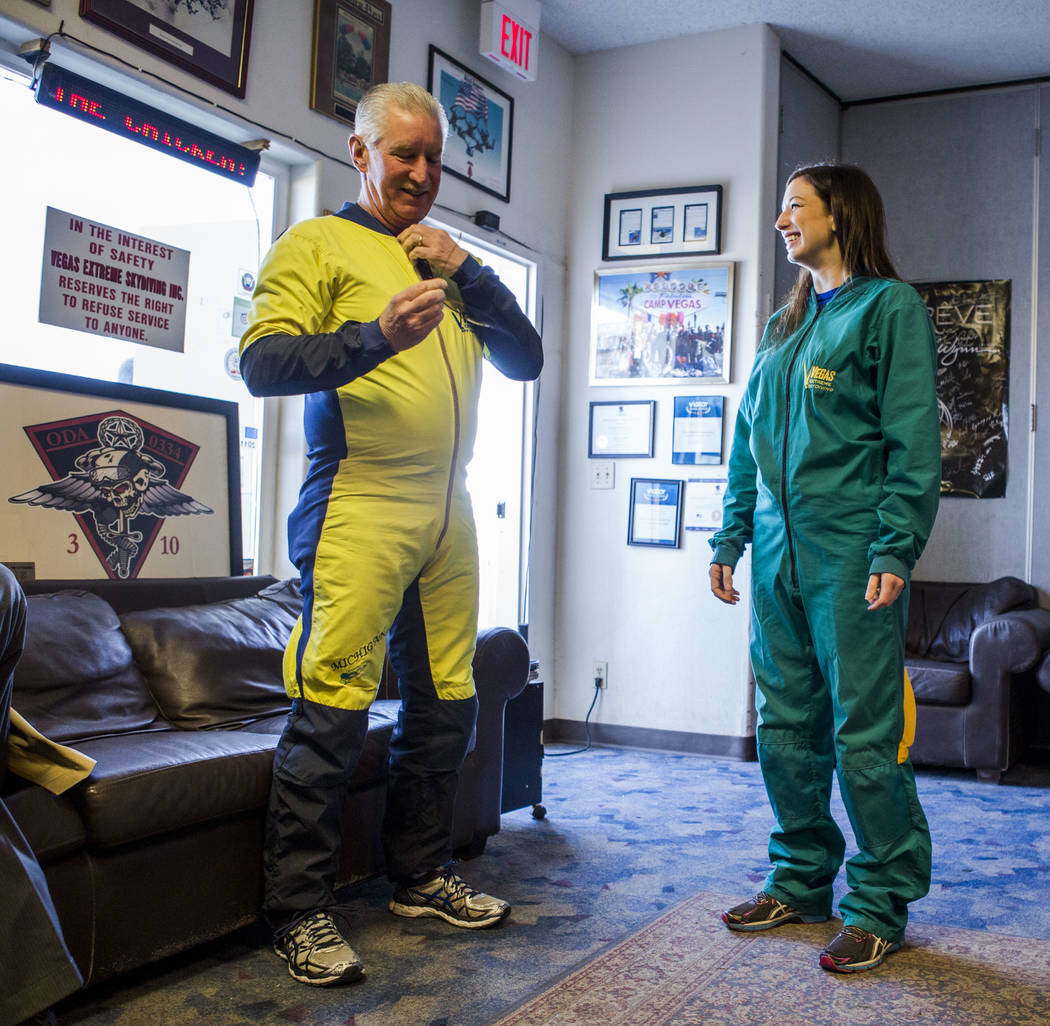 Bill McCrane, who just turned 60, prepares to skydive with his daughter, Jessica, with Vegas Extreme Skydiving at the Jean Sport Aviation Center in Jean on Tuesday, May 16, 2017. Patrick Connolly Las Vegas Review-Journal @PConnPie 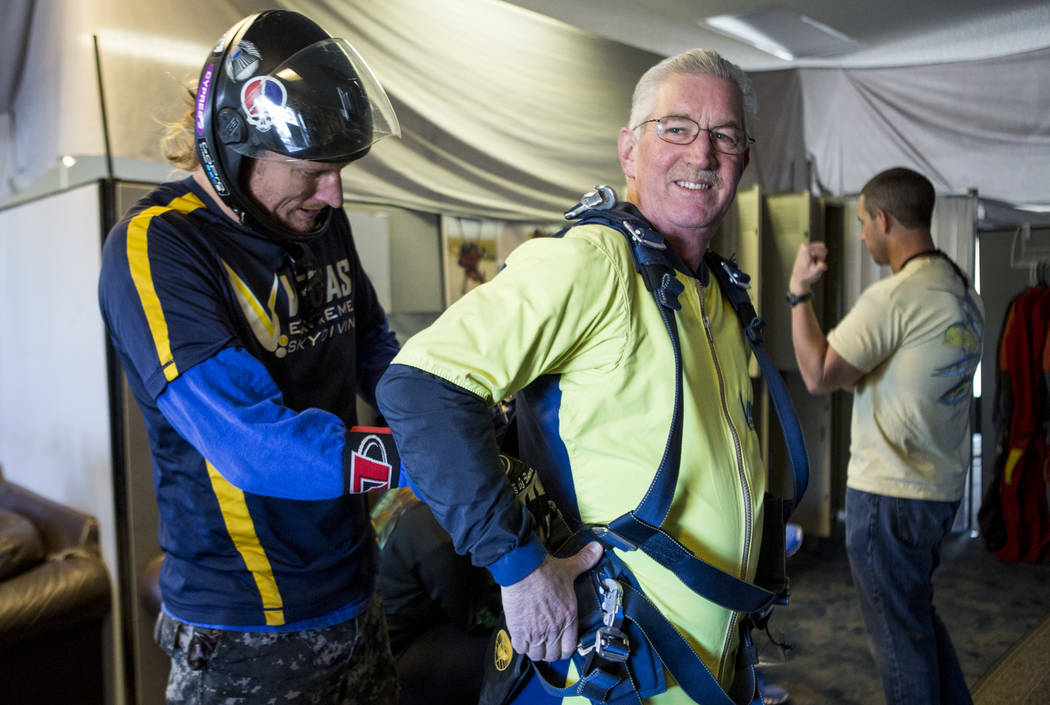 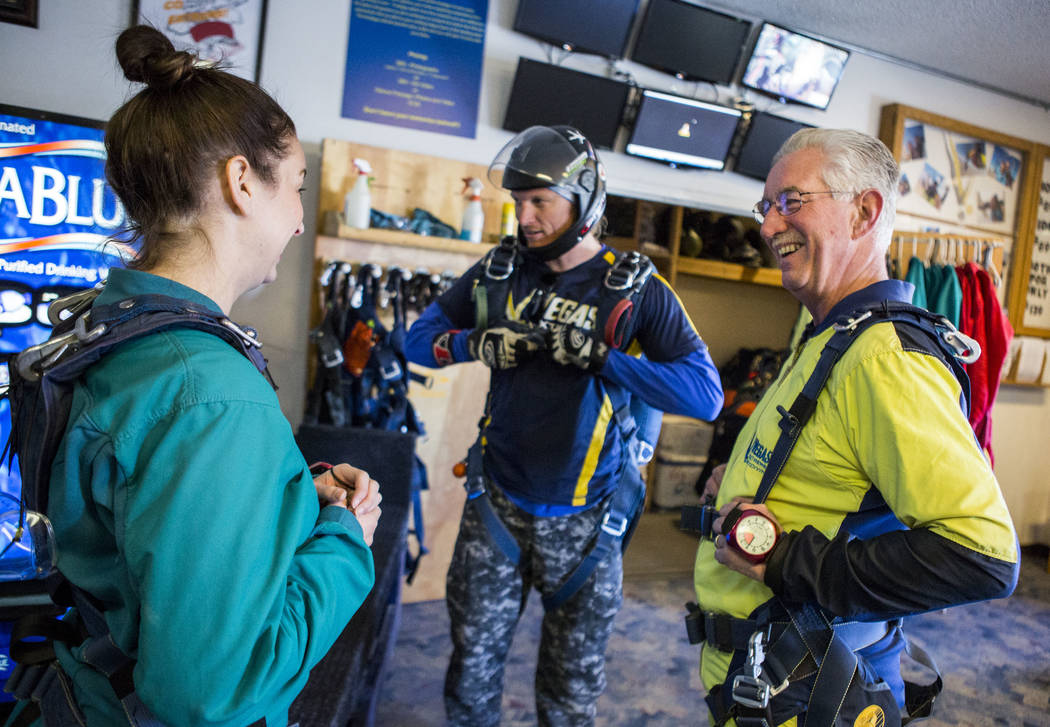 Bill McCrane, who just turned 60, shares a moment with his daughter, Jessica, before skydiving with Vegas Extreme Skydiving at the Jean Sport Aviation Center in Jean on Tuesday, May 16, 2017. Patrick Connolly Las Vegas Review-Journal @PConnPie 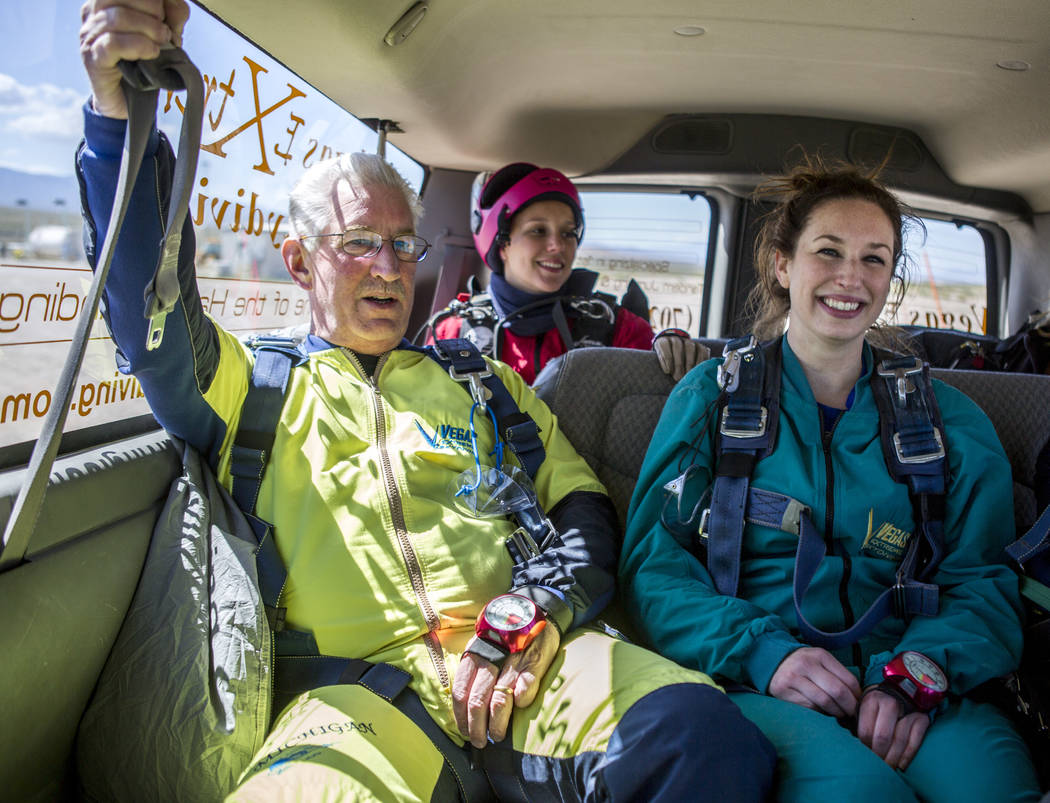 Bill McCrane, who just turned 60, catches his breath after skydiving with his daughter, Jessica, with Vegas Extreme Skydiving at the Jean Sport Aviation Center in Jean on Tuesday, May 16, 2017. Patrick Connolly Las Vegas Review-Journal @PConnPie

It’s no secret we baby boomers don’t want to pass without crossing off a number of to-dos from our bucket lists.

Surveys consistently show the majority of us want to travel hither and yon, see the places we’ve only seen in the movies. Others may want to get a book written, a language mastered or compete in swimming or track competitions.

And then there are those who want to get an instant rush, who enjoy the excitement accompanying what are known as extreme sports — activities that include paragliding and skydiving.

According to the lifestyle/health website howstuffworks.com, extreme sports rank seventh in a list of 10 activities that boomers want to participate in at this stage of their lives.

It was a glorious, 70-degree morning at the headquarters of Vegas Extreme Skydiving in Jean, just off I-15, and Eddie Carroll’s skydiving business was booming.

While the other first-timers were middle-aged or younger — each participant jumps in tandem with an experienced skydiver — Carroll said he often gets local and out-of-town boomers who want to try something they’ve always dreamed of but never had the time or money.

McCrane was with his wife, Debbie McCrane, daughter, Jessica McCrane and cousin Amy Kaplan. Doing something that can be dangerous isn’t new to Bill McCrane.

He was one of the firefighters who worked the aftermath of the Sept. 11 attacks on the World Trade Center.

“It was one of the saddest years of my life, digging for bodies,” he said. “But life goes on.”

McCrane’s wife said skydiving isn’t for her, but she wanted to support her husband and daughter.

“I’m not surprised Bill’s doing this, but I am surprised that (Jessica) is doing it,” Debbie said.

In his research for the jump, Bill McCrane found that tandem skydiving, where a student skydiver is connected to a harness attached to a tandem instructor, is very safe. The U.S. Parachute Association reports 0.002 student fatalities per 1,000 tandem jumps over the past decade.

McCrane asked his daughter, a flight attendant for United Airlines, if she’d jump, and she agreed.

“It’s not something I’d do on my own, but I like doing something with my dad,” she said. “I’m actually afraid of heights.”

When it was their turn to go up in the plane — it would level off at 15,000 feet — both father and daughter spent a good deal of time talking to the experienced skydiver assigned to each of them for their jumps. They didn’t cringe when their instructors told them they would free-fall for 8,000 feet at about 120 miles per hour before their parachutes would open.

It didn’t take either of them long to reach the ground with their instructors behind them.

Smiling, Jessica McCrane called the feeling “terrifying. I don’t want to do it again.”

Her baby boomer dad was ready to do it again.

“What an incredible feeling. The speed is just — I don’t know how to explain. You leave the plane and you fall so fast. It felt great. A great birthday present. I’d definitely do it again.”