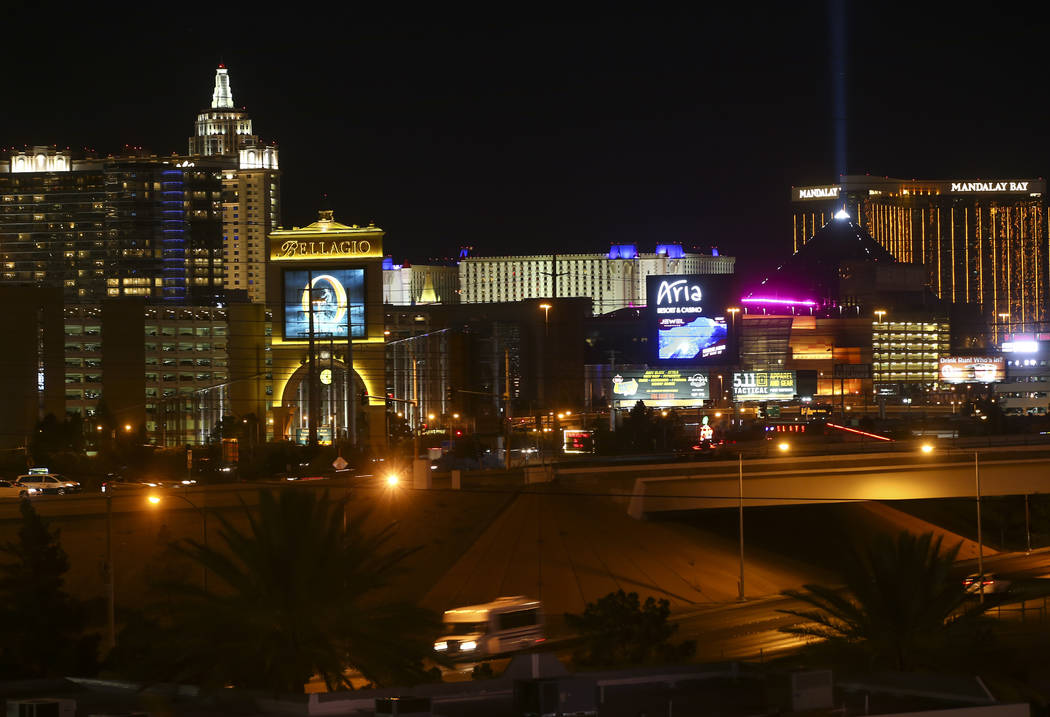 A portion of the Las Vegas skyline as shown from the Rio hotel-casino on Tuesday, May 23, 2017. Chase Stevens Las Vegas Review-Journal @csstevensphoto

Driving along the Strip to admire the twinkling lights is a moment cherished by tourists, and typically avoided by savvy local residents.

But the slow-moving vehicles cause massive traffic jams that make it difficult for police, fire and paramedic vehicles to quickly respond to emergencies on Las Vegas Boulevard.

In light of the Oct. 1 mass shooting at the south end of the Strip, Clark County Commissioner Chris Giunchigliani is floating an unusual idea to bar private vehicles from being able to cruise past an area roughly spanning from Mandalay Bay to the Stratosphere.

Giunchigliani suggested that only pedestrians, buses, taxicabs and ride-hailing companies like Uber and Lyft should be allowed to drive along the world- famous Strip as a way to relieve traffic congestion, improve pedestrian safety and provide better access for first responders.

“We really need to look at how you move someone much more safely, especially given what happened with the shooting, because we had difficulty getting emergency vehicles through,” said Giunchigliani, whose District E includes a section of the Strip.

Earlier this month, the Regional Transportation Commission of Southern Nevada’s board of directors agreed to spend nearly $2.3 million to examine transit options that would link the Strip, McCarran International Airport and downtown Las Vegas.

Giunchigliani, an RTC board member, said she hopes her idea will be included in the agency’s latest study as a way to improve efficiency and safety on one of the world’s most recognizable sections of road.

RTC spokeswoman Angela Castro said that the study will specifically focus on “high-capacity transit options” such as a light rail line and elevated expressways.

“If dedicated transit lanes were recommended, they could also provide access to emergency responders,” Castro said.

Giunchigliani floated the same idea several years ago, but it didn’t go anywhere. The county commissioner recognized the effort might not gain traction this time around, either.

“I want to make sure we look at all the angles,” Giunchigliani. “Regardless of whether people agree with the idea or not, we should have a conversation to see what’s working and if there are better ways to move people.”

Andrew from the southwest valley reminded the Road Warrior to follow up on the RTC’s promise in July to take a closer look at a set of traffic signals that appear to be out of sync along Blue Diamond Road.

Dean Martin Drive and Valley View Boulevard are relatively close to each other along Blue Diamond, and appear to be unsynchronized due to heavy traffic in the area, Andrew said.

RTC spokeswoman Catherine Lu said that the agency continues to monitor this area — particularly the congestion that gathers on eastbound Blue Diamond for commuters headed to Interstate 15.

Part of the problem comes from the fact that eastbound drivers lose some “green time” to pedestrians who regularly cross at both Dean Martin and Valley View during the morning commute, Lu said. The pedestrian signals flash a minimum of 50 seconds allowing for safe passage across the road.

In the meantime, Lu said that the RTC will continue to keep an eye on this area and examine potential improvements.

“It can be a challenge to find a balance for vehicular and non-vehicular traffic at these intersections, and we recognize the value of every traveler’s time,” Lu said. “Every corner of our valley is growing substantially, and it is our goal to manage traffic to accommodate all travelers, whether in cars, in buses, on bicycles or on foot.”

Doug, also from the southwest valley, wanted to know what type of road construction was going on at Fort Apache Road and Sherwood Greens Drive.

“This intersection has been torn up for over a year and there are steel plates in the road and orange cones all over the place,” Doug wrote in an email to the Road Warrior.