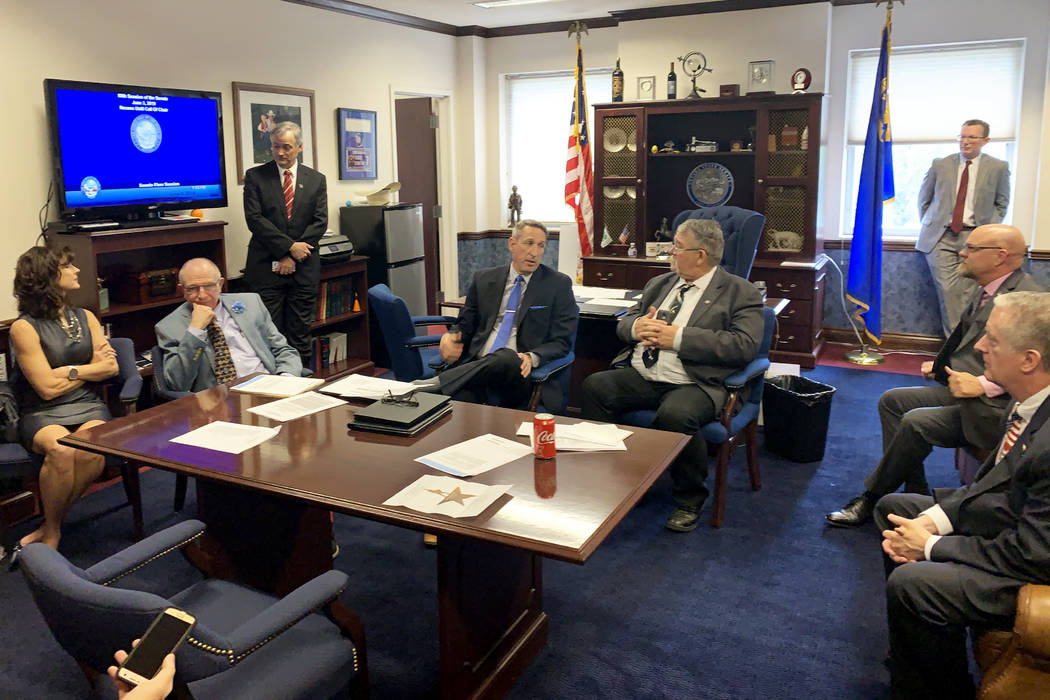 The Republican Senate caucus at a Monday, June 3, 2019, meeting with reporters following the Senate's vote on a payroll tax extension to fund education, which the caucus opposed. Minority Leader James Settelmeyer, R-Minden, third from left, said the caucus would sue if the measure is approved by the governor. (Bill Dentzer/Las Vegas Review-Journal) 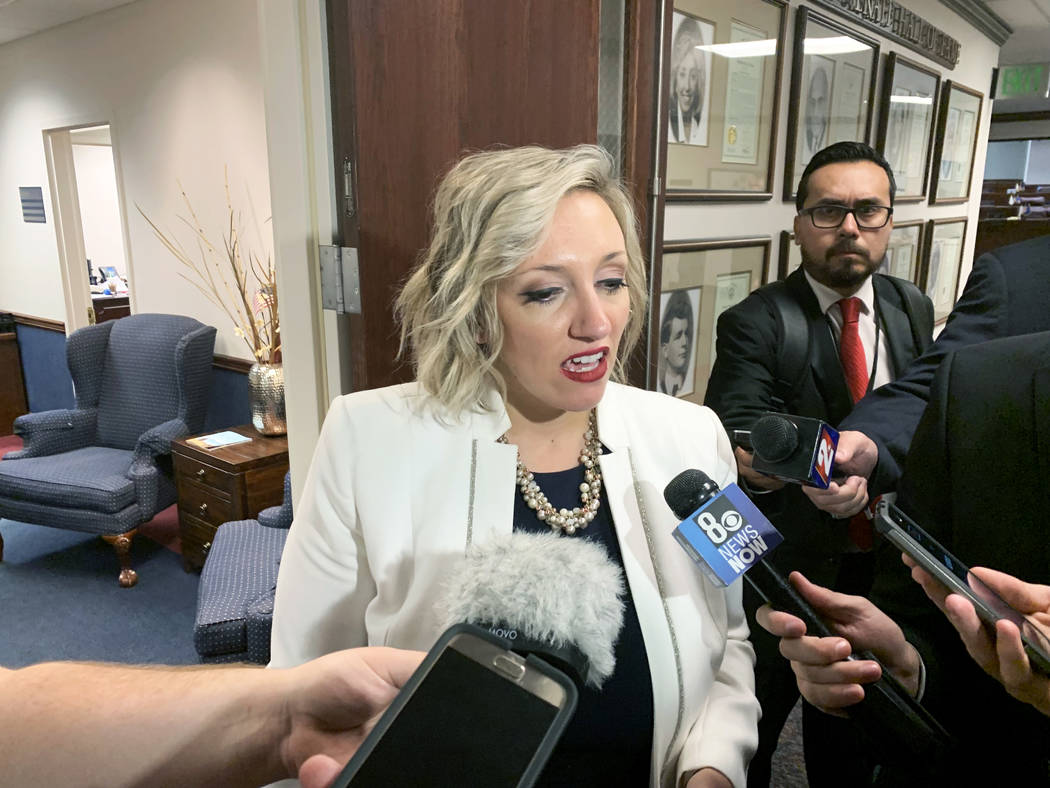 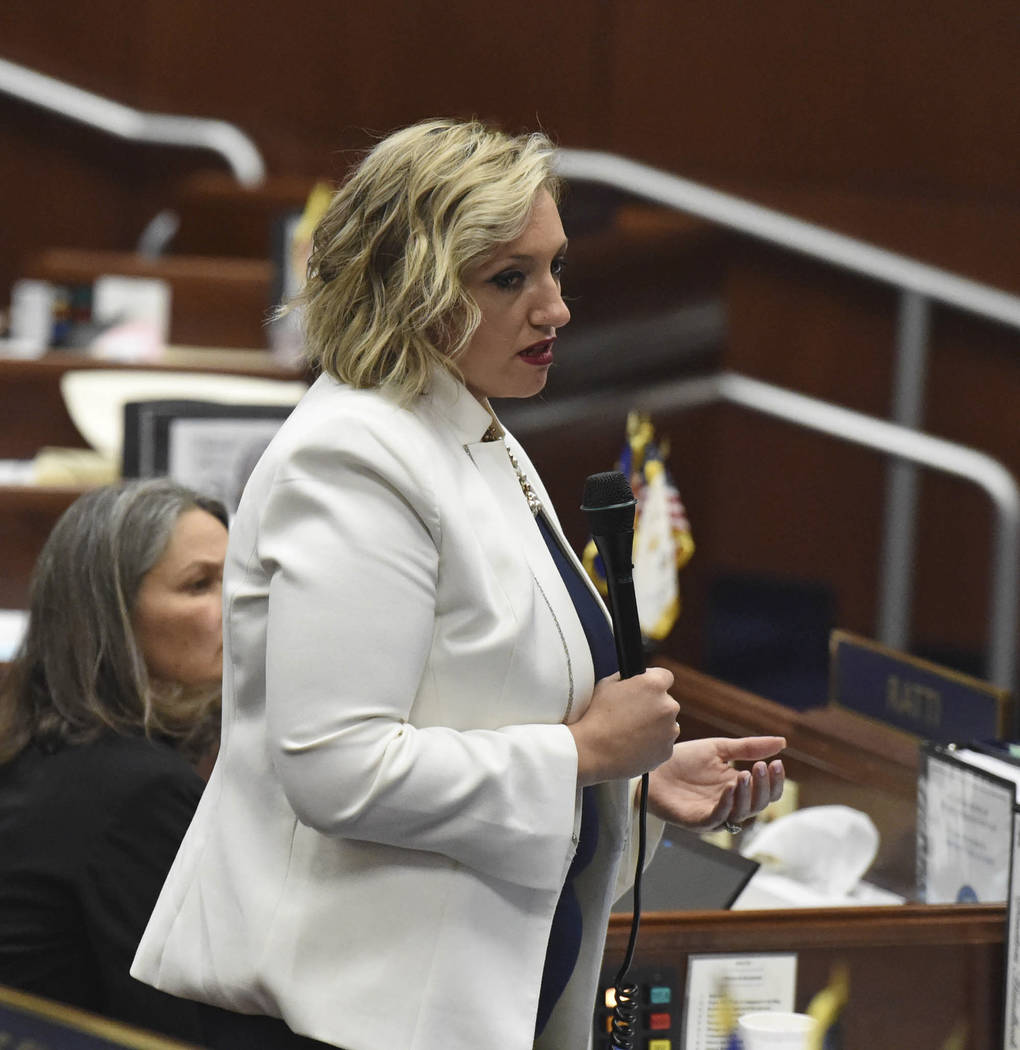 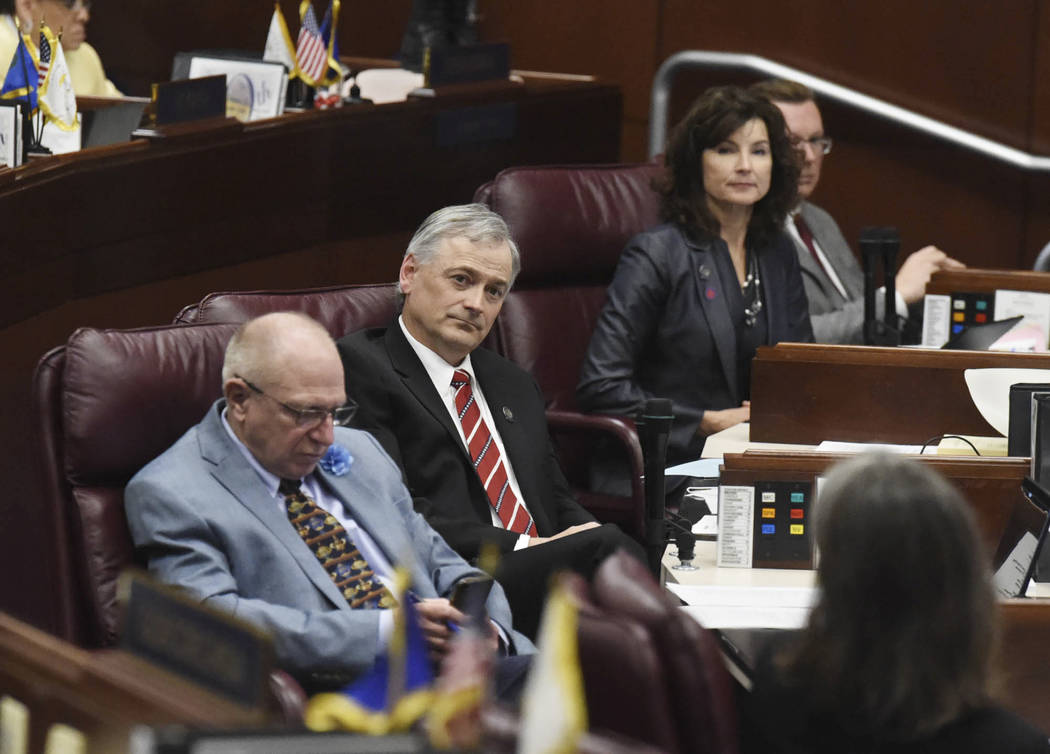 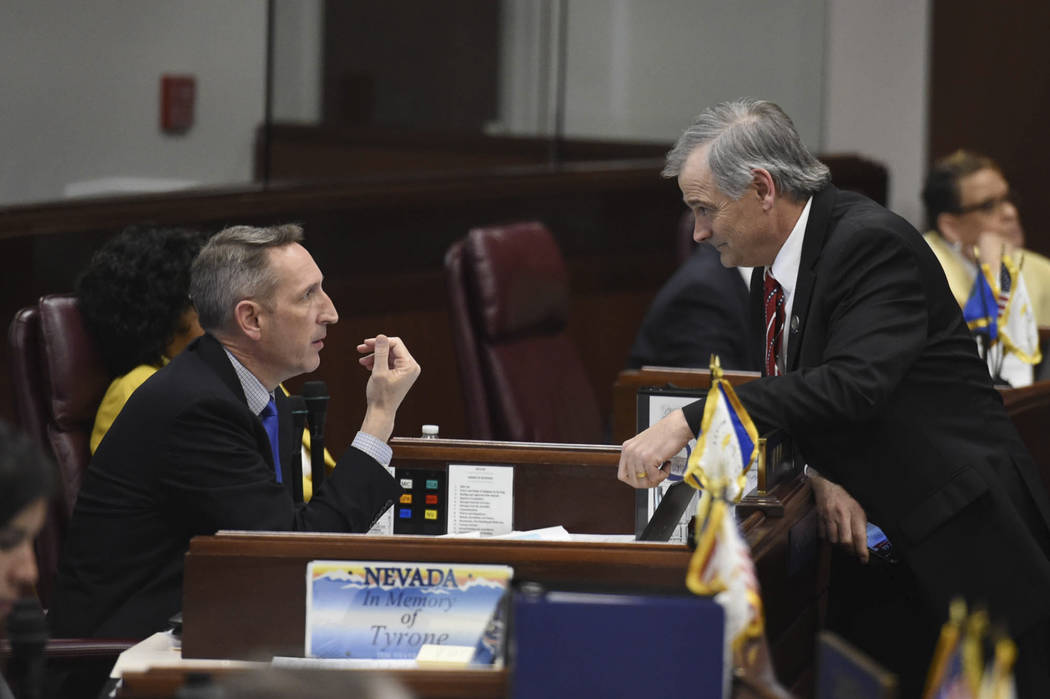 Nevada state Sens. Scott Hammond, left, and James Settelmeyer chat during a break on the Senate floor on the last day of the 2019 Nevada Legislative session on Monday, June 3, 2019, in Carson City. (Andy Barron/Reno Gazette-Journal via AP)

CARSON CITY — A disputed move to extend the state’s business payroll tax and send the money to education provided most of the drama on the last day of the legislative session as majority Democrats sought first to press Republicans to support the measure then changed the bill to work around their opposition.

By 9 p.m., though, three hours before the end of the session, the drama was over as the bill passed the Assembly on a party-line vote after passing the Senate in the same fashion earlier in the day.

And half an hour after that, the Clark County School District, the state’s largest, issued a statement saying the money provided by the bill — combined with a second measure authorizing quarter-cent local sales tax increases to fund education and social programs, including teacher retention efforts — would enable the district to fund seniority and cost of living raises for employees totaling 5 percent.

Thanks to @GovSisolak, @Nicole4Nevada, @JasonFrierson and other legislative leaders for the increase in K-12 funding in the upcoming biennium! #SB551 just passed the Assembly and is on its way to the Governor for signature. pic.twitter.com/7UIsOjjWjx

The Senate saw multiple floor votes, one take-back vote and floor debate that approached the two-hour mark even with Democrats twice moving to cut off discussion. The final version of the bill, approved 13-8 in the Senate and 28-13 in the Assembly, almost certainly promises a lawsuit from Republicans.

“Every member of this caucus who stood and voted now in this body has the right to file a lawsuit. So do the businesses that are affected,” Senate Minority Leader James Settelmeyer, R-Minden, said in a Senate Republican caucus meeting with reporters following the vote. “We’ll see what the governor does.”

The approved version of Senate Bill 551 was the fourth iteration of legislation Senate Democrats introduced a week ago, tying a contentious extension of the payroll tax to support for education and challenging Republicans to choose between cutting taxes or funding schools. Democrats proposed to put the $98 million in additional revenue toward school safety and a variety of other initiatives that changed over the course of the week.

Republicans contended that the tax extension wasn’t needed and that the state had more than $100 million in surplus funds, but Democrats claimed that the money is a one-time surplus and shouldn’t be used for ongoing expenses.

That version also added $9.5 million to fund a private school scholarship program popular with Republicans. In the biggest concession, Democrats also agreed to let the bill come to the floor with a requirement that a two-thirds majority was needed for passage.

That two-thirds question on the tax extension has persisted since Gov. Steve Sisolak raised it in his State of the State address and proposed budget in January. Republicans said the extension needed the supermajority; Democrats said it didn’t. Legislative lawyers, in an opinion, sided with the Democrats.

On Monday, the amended bill failed along party lines, 13-8. After a recess, Democrats approved a new version of the bill that removed the supermajority requirement.

But the revision went even further, eliminating a controversial but dormant school voucher-like program Republicans passed in 2015 when they controlled the Legislature and governor’s office. Amid legal challenges, the program was never funded.

“We made an attempt to try and meet (Republicans) with what seems to be the largest concern, which was this idea that it should be a two-thirds requirement,” Senate Majority Leader Nicole Cannizzaro, D-Las Vegas, said after the Senate vote. “And so we attempted to meet them halfway on that. It’s unfortunate that we couldn’t get there.”

She added that the education savings accounts are “not something that is a current program.”

“Since it is no longer being used, we decided to take it out,” she said.

Republicans, in addition to vowing legal action, called the move to strip the ESA program “petty” and said Democrats had threatened the move in a carrot-and-stick attempt to win Republican support.

“Throughout this, I don’t think it’s really been about the money,” said Sen. Heidi Gansert, R-Reno. “To me, what it looks like is they wanted to leverage the (payroll tax) against schools so they could put us on the record as if we’re against education when we’re clearly not. I think what they want to do basically is save this money so they can have a pork bill and spend on other things.”

There, Republicans once again raised the constitutional issues, while Assembly Majority Leader Teresa Benitez-Thompson, D-Reno, read out the amounts that each of Nevada’s 17 counties would get under the bill.