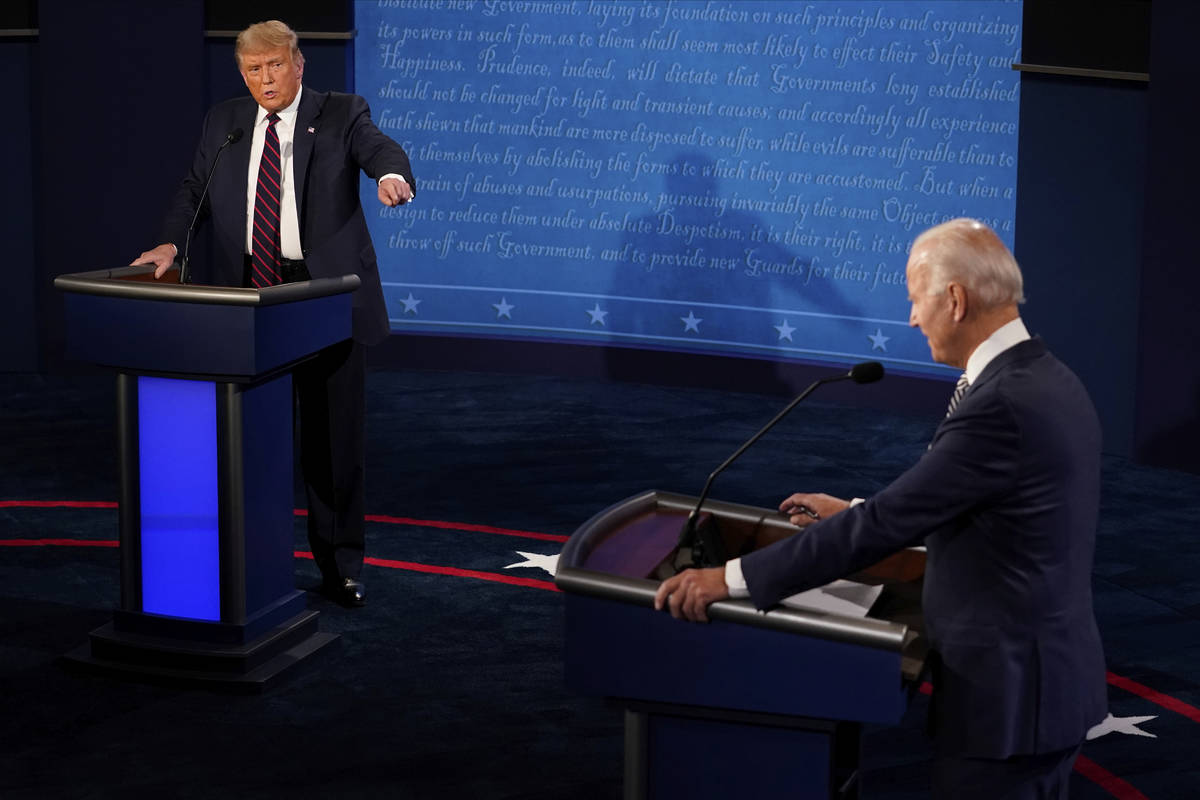 With exactly one month until Election Day, the two major party presidential campaigns and their top surrogates are beaming with optimism as they grind through the final push to a contest years in the making.

“I think this is going to be a change election,” said former Senate Majority Leader Harry Reid, longtime friend and ally of Democratic nominee Joe Biden.

Reid believes President Donald Trump will be beaten, and Democrats will capture a Senate majority and grow its advantage in the House.

“This Teflon president we have is wearing very, very thin,” Reid said. “He is in big trouble in Nevada and across the country.”

But the Trump campaign is no less confident.

“We’re not taking anything for granted,” said Scott Scheid, a senior adviser for Trump’s Nevada campaign. “I know Biden parachuted a staff in last minute, and he’s put in no resources or investment into the ground game. They’ve just started knocking on doors.”

Scheid said Trump put 60 staffers on the ground more than a year ago — a larger field staff than that of recent Republican candidates at any point in past cycles.

Both camps concede the race for Nevada will be a tight one. Voter registration still favors a Democrat by 5 percentage points, but Republicans have cut a one-point slice into the 2016 lead that may yet be significant, given Trump only lost the state by about two-and-a-half points in 2016.

Trump and Biden have run drastically different campaigns during an election season unlike any other due to the COVID-19 pandemic.

Democrats have campaigned almost entirely online with virtually no public events. They are focused, as they have been for years, on registering new voters and encouraging existing ones to take advantage of the state’s newly increased vote-by-mail rules. Remote appearances from Biden’s top surrogates have been blended with new ideas, such as meeting college voters through the Nintendo Switch game “Animal Crossing.”

Republicans are pushing a digital campaign and have out-registered Democrats in recent months, but they have also more or less returned to traditional events in recent months. They’ve ignored or even openly mocked criticism from Democratic leaders, including Nevada Gov. Steve Sisolak, over public health threats in holding large, in-person rallies, as the president and his sons have blanketed the state in recent weeks.

Trump had planned to visit the state again next week, but it was postponed after he tested positive for coronavirus.

“The state remains a swing state,” said Rob Lang, a public policy professor and executive director of The Lincy Institute and Brookings Mountain West at UNLV. “It has leaned more Democratic recently, but it’s still contested.”

Lang, who recently co-authored a book on the shifting dynamics of swing states titled “Blue Metros, Red States,” said Biden would seem to hold an advantage, but he cautioned that a Democratic loss in Nevada could indicate far worse for the former vice president’s chances.

“If you lose Nevada, you’re going to lose Arizona,” he said. “And it may be close in Colorado, and you may be losing some states across the Midwest.”

While Reid is optimistic, he urged Biden and state Democrats to “keep the gas pedal down” in the final weeks.

“I saw one poll had Biden ahead by 11 points, but that’s ridiculous,” Reid said. “It’s a four-to-five-point race at this time.”

Biden’s campaign has been noncommittal on whether the former vice president, who is not holding large-scale rallies but is actively visiting other battleground states for smaller events, will make it to Nevada.

“Yes,” Reid said when asked if Biden needs to visit the state before the election. “And he will.”

Julie Chavez Rodriguez, Biden’s deputy campaign manager, said the campaign is “writing a new playbook for how we organize,” with a focus on digital outreach while respecting health precautions set during the coronavirus pandemic.

By following health guidelines, Rodriguez said, Biden is serving as a role model and contrasting his personality to that of Trump, who has disregarded state restrictions on gatherings.

The campaign began running TV ads in Las Vegas in July and Spanish-language commercials in September. Rodriguez said the plan is to continuously hit Trump for his handling of the pandemic.

“We know Nevadans really can see Trump’s clear record of failure and the devastating impact it’s had on families and businesses,” she said. “The state has seen high rates of unemployment and business closures (during the pandemic). We want Nevadans to know it didn’t have to be this way.”

Biden has outraised Trump in recent months and is capable of keeping up the ad schedule until Election Day.

Lang noted Biden has recently switched from comparison ads targeting Trump to commercials focused only on highlighting Biden’s character, which Lang took as a sign the campaign feels good about its chances.

Earlier this week, the campaign also green lit in-person voter contacts — door knocking — for the first time since the onset of the pandemic.

Rodriguez noted that while Biden has not visited Nevada, his running mate, California Sen. Kamala Harris, has made several campaign stops in the state. Biden’s wife, Jill, has also appeared remotely several times in recent months.

She said the campaign is paying careful attention to constituencies needed for Democratic victory, including Latinos, African-Americans and Asian-Americans/Pacific Islanders.

The Trump campaign touts massive numbers from its field organization — more than 2.6 million voters contacted — that some Democrats have questioned.

He said the campaign has built out in 18 states, not only to hold Trump’s 2016 map but expand into states deemed winnable by the campaign, including Nevada.

Overall, Carr said the campaign has activated some 2.2 million volunteers through digital and traditional means. These volunteers may be active campaign participants or simply encouraging their friends and family to vote or hosting local gatherings, dubbed MAGA (Make America Great Again) meetups.

The 60-person field staff is already 50 percent larger than what Trump deployed in Nevada in 2016, Carr said, and much larger than that of previous Republican challengers Mitt Romney and John McCain. He noted Republicans have also set up offices tailored toward turning out minority voters.

“There’s some similarities there in the Barack Obama had a movement behind him, and when Trump came down that escalator in 2015, that started a movement,” Carr said.

The one-month-out mark would normally signal a flurry of campaign rallies, but the pandemic changed that.

Trump drew thousands at an outdoor rally in Minden and indoor rally in Henderson last month. His sons hosted smaller gatherings in Pahrump and Sparks soon after. The president had intended to visit the state again before his diagnosis.

Hosts of these rallies have been met with condemnation or even fines from state and local officials.

Carr said these rallies are important, as they raise voter enthusiasm.

“Turning out your base will be crucial,” Scheid said. “A text message is fine, a phone call is a little better, but nothing beats face-to-face.”

Reid, the longtime Democratic patriarch of the state, did not agree.

“I don’t think the Trump family will pick up a single vote they didn’t already have at these rallies,” Reid said. “(Trump’s sons) are unimpressive people.”

Lang, with UNLV, sided with Reid, saying rallies are little more than “television moments” that do not move the needle significantly when it comes to turnout.

The much bigger question, Lang said, is whether the Democrats and their high-powered ally, the Culinary Union Local 226, will be able to register and turn out a base that should be growing in their favor, as Clark County has grown younger and more diverse since the last election.

“The Culinary turnout machine is a bigger factory than the rally theatrics,” Lang said.

The union began its volunteer operation in early August, saying some 200 staff members and thousands of other volunteers have begun to turn out the vote. But it seems almost certain in-person voter contact efforts by the union, state Democrats and Biden’s campaign won’t reach 2018 levels.

With ballots being mailed to all active voters and increased early voting options, overall turnout should be higher in Nevada, Lang said. He also anticipated statewide results will be available fairly soon after the election, as the state has a history of running efficient elections and experience with mail ballots.

High turnout typically favors a Democrat, but in Nevada, geography is key. Previous Democratic candidates such as Sen. Catherine Cortez Masto have been able to win statewide election without carrying the state’s small, rural, conservative counties.

“Turnout in Clark County must be cranked out if you’re the Democrats,” Lang said. “If they can break even or keep the recent gains in Washoe, they will win the state.”