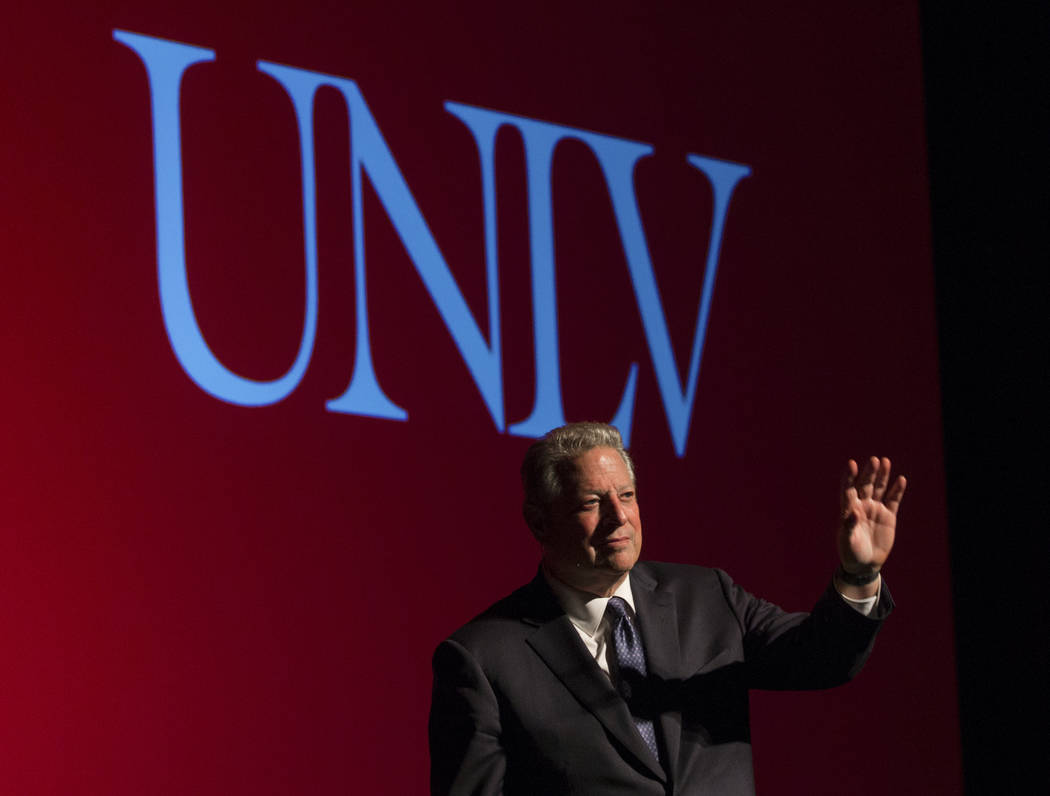 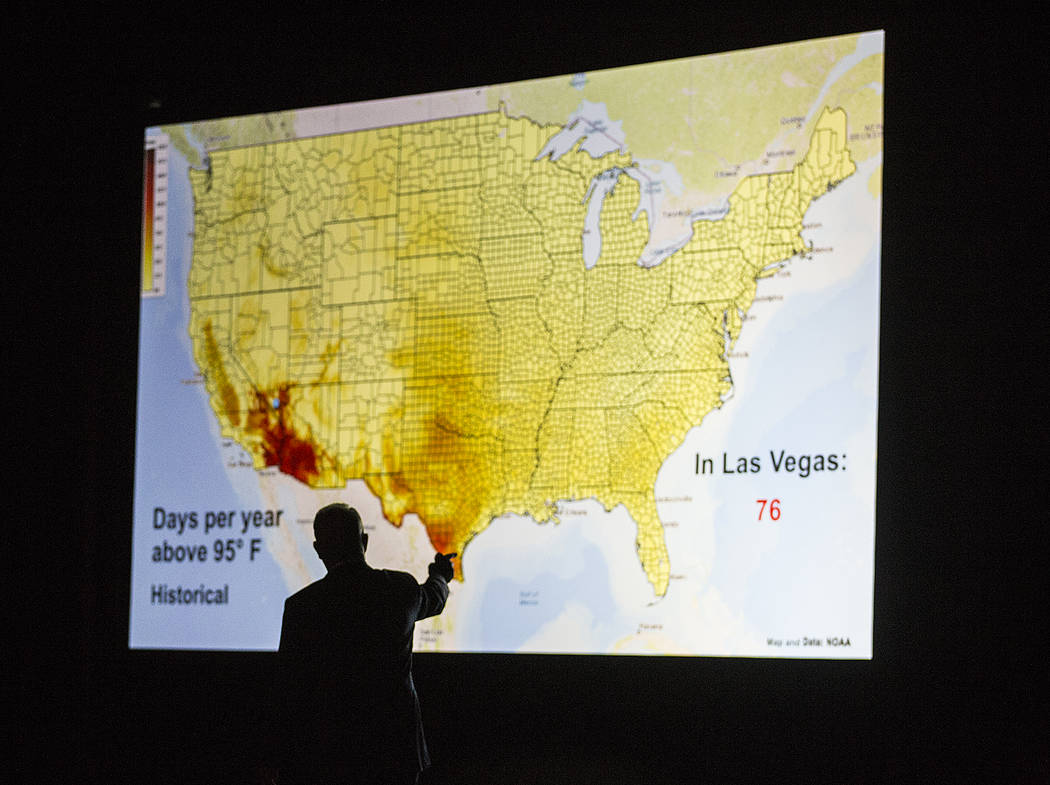 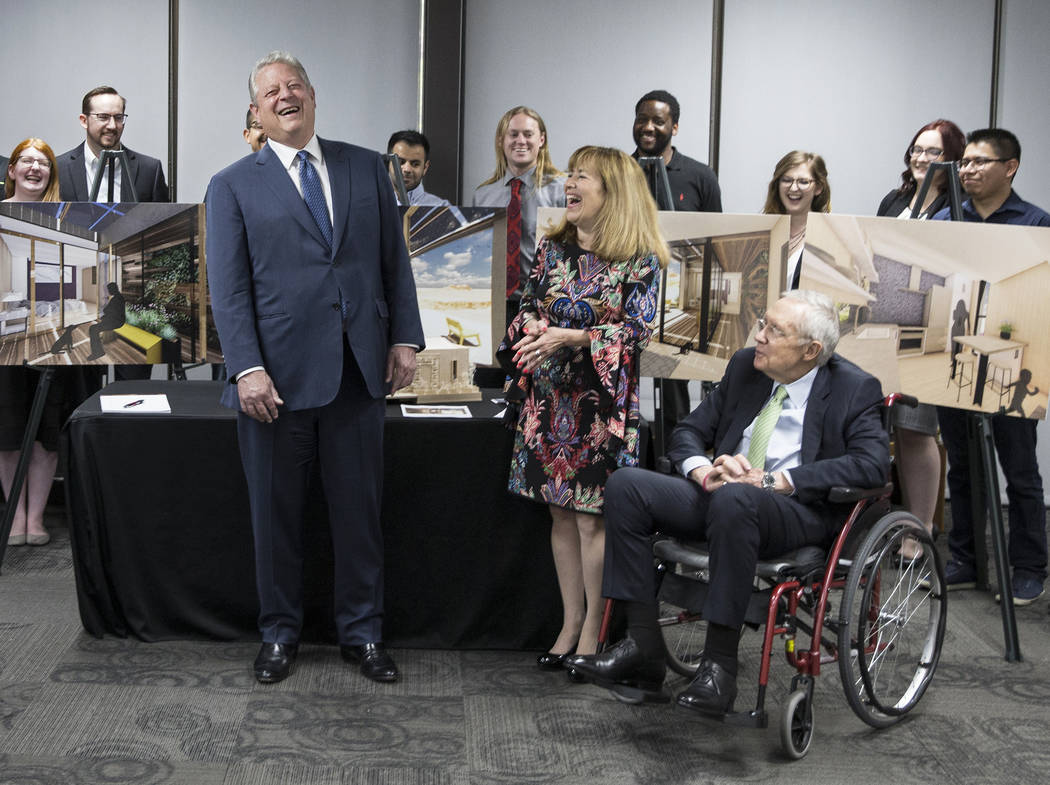 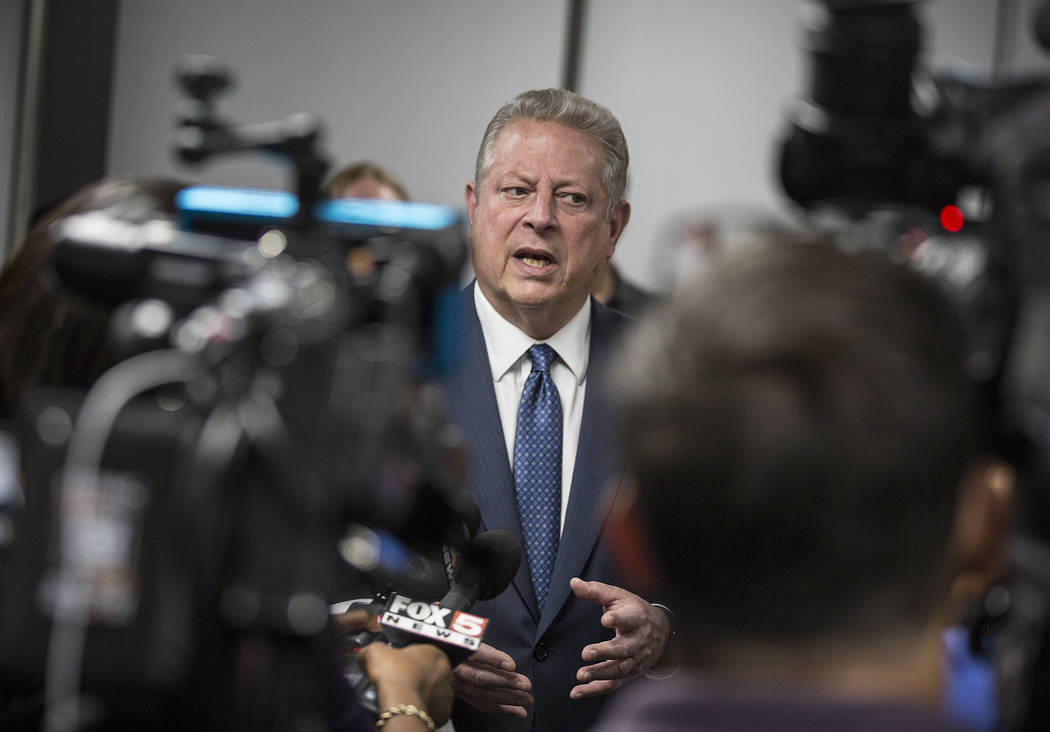 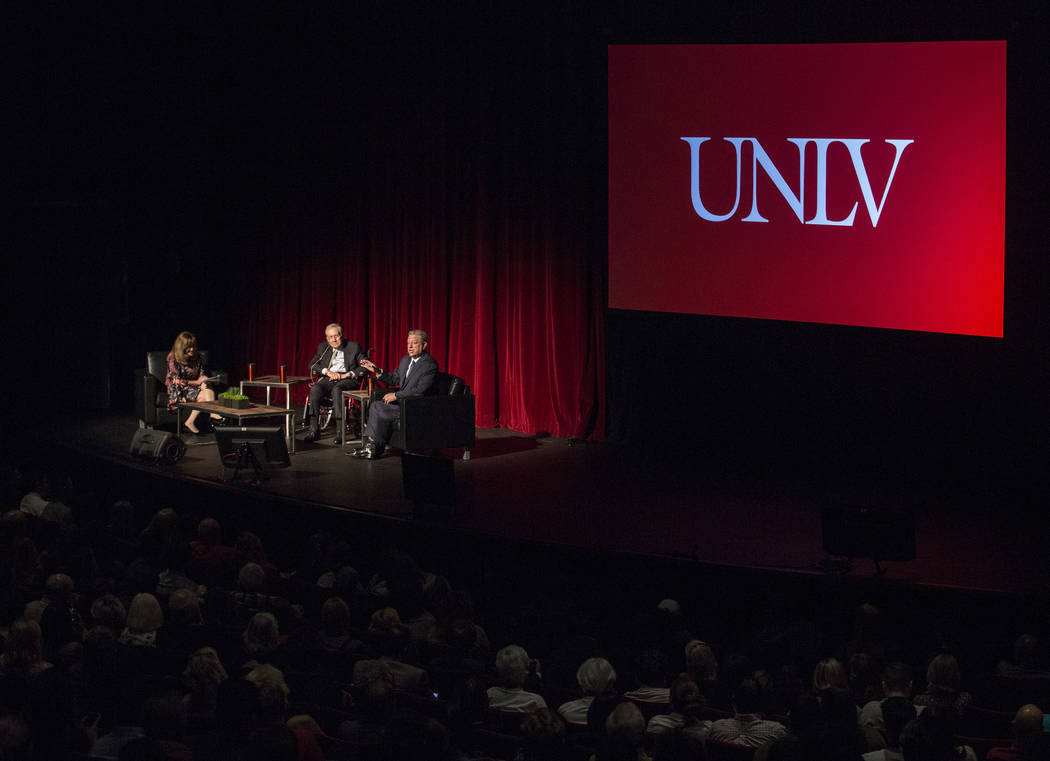 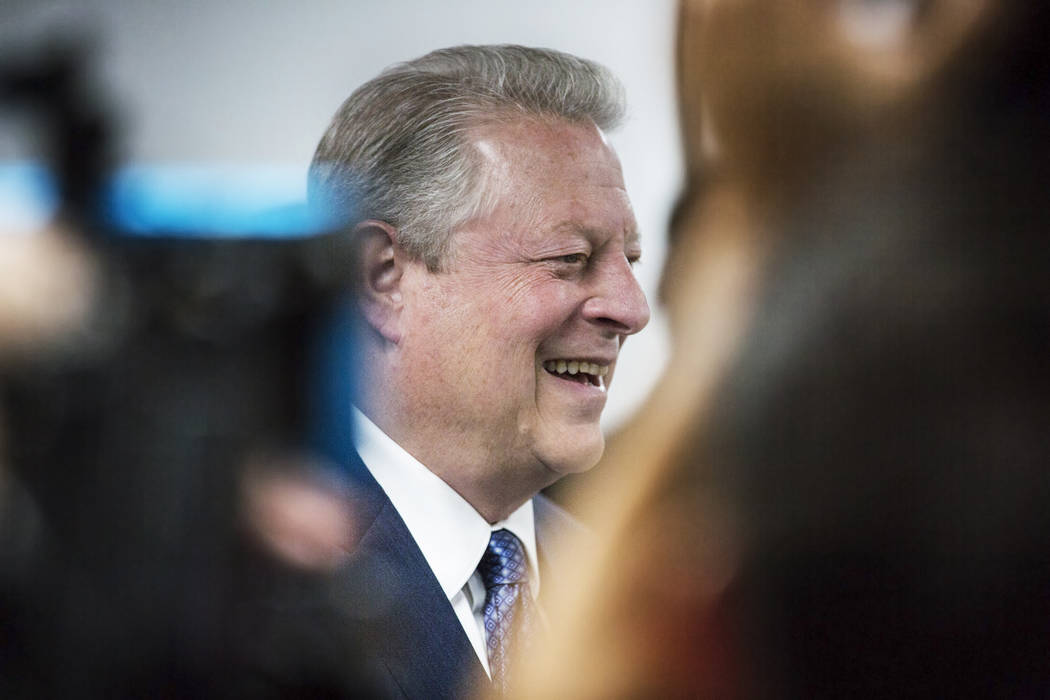 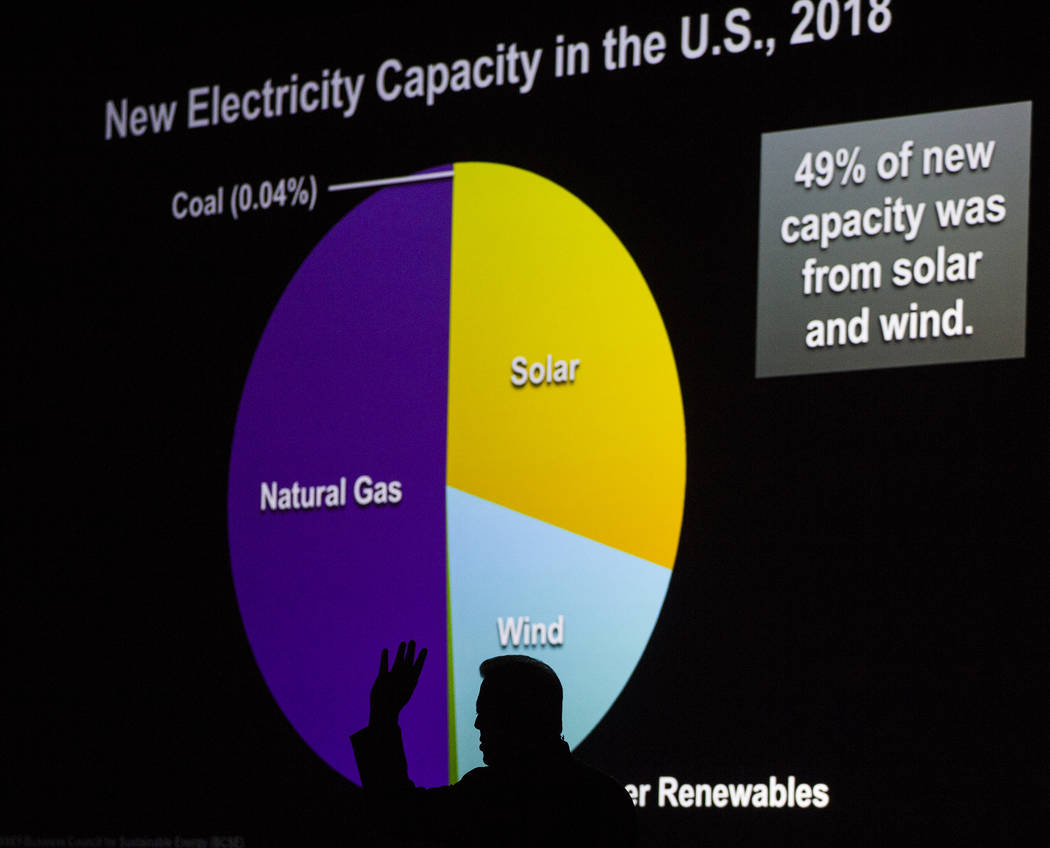 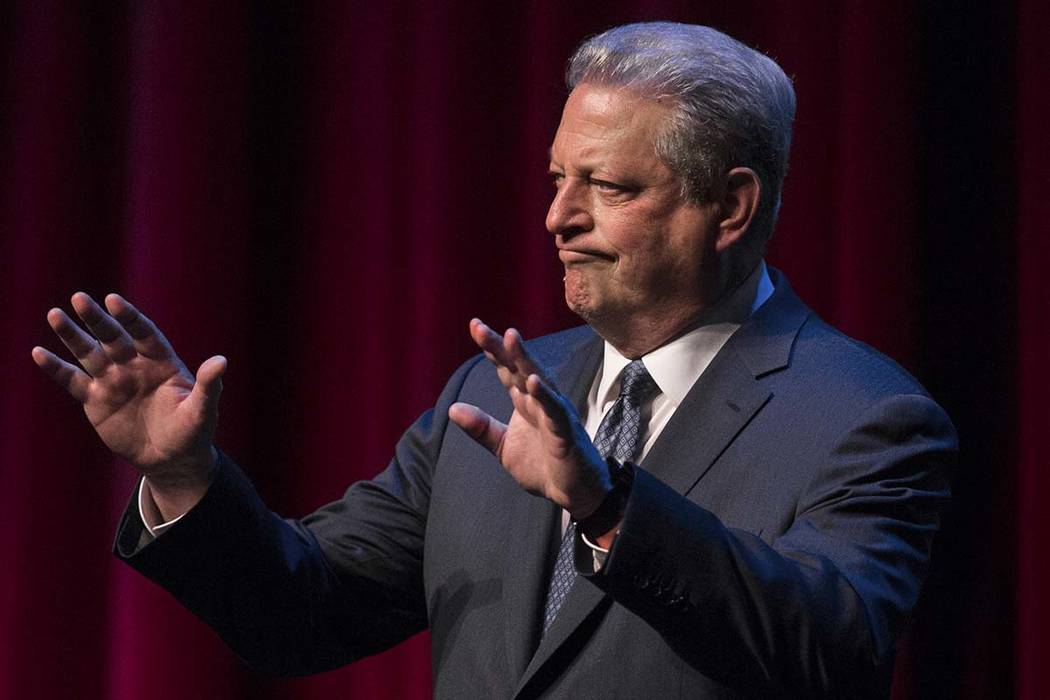 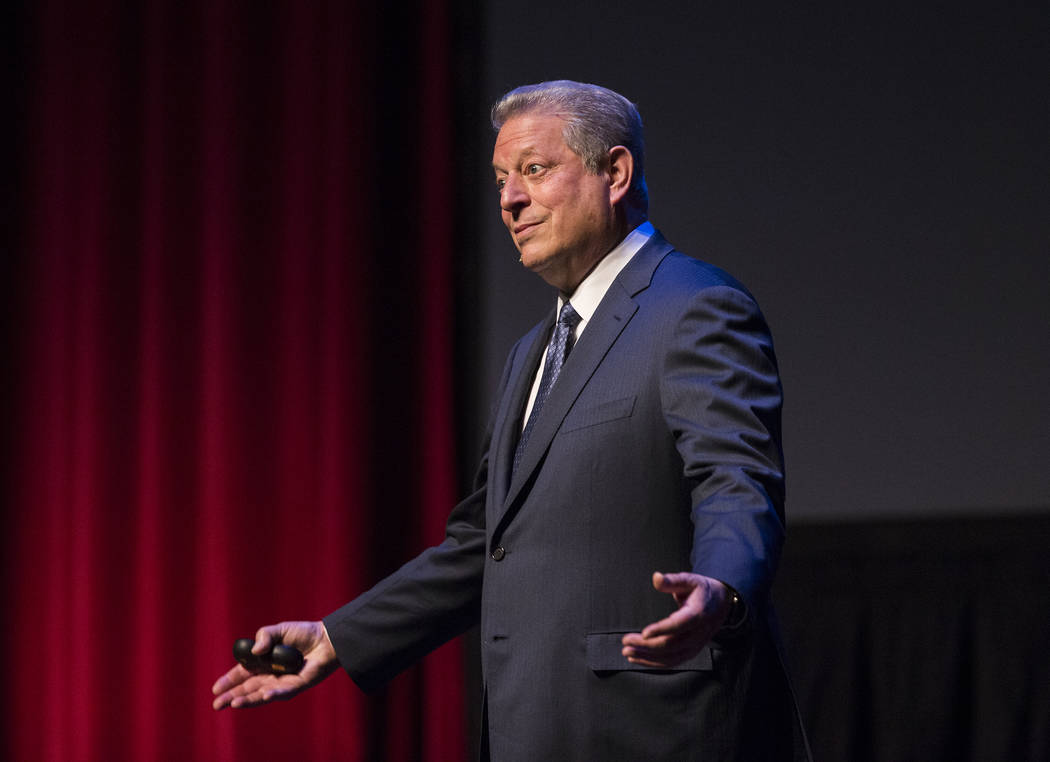 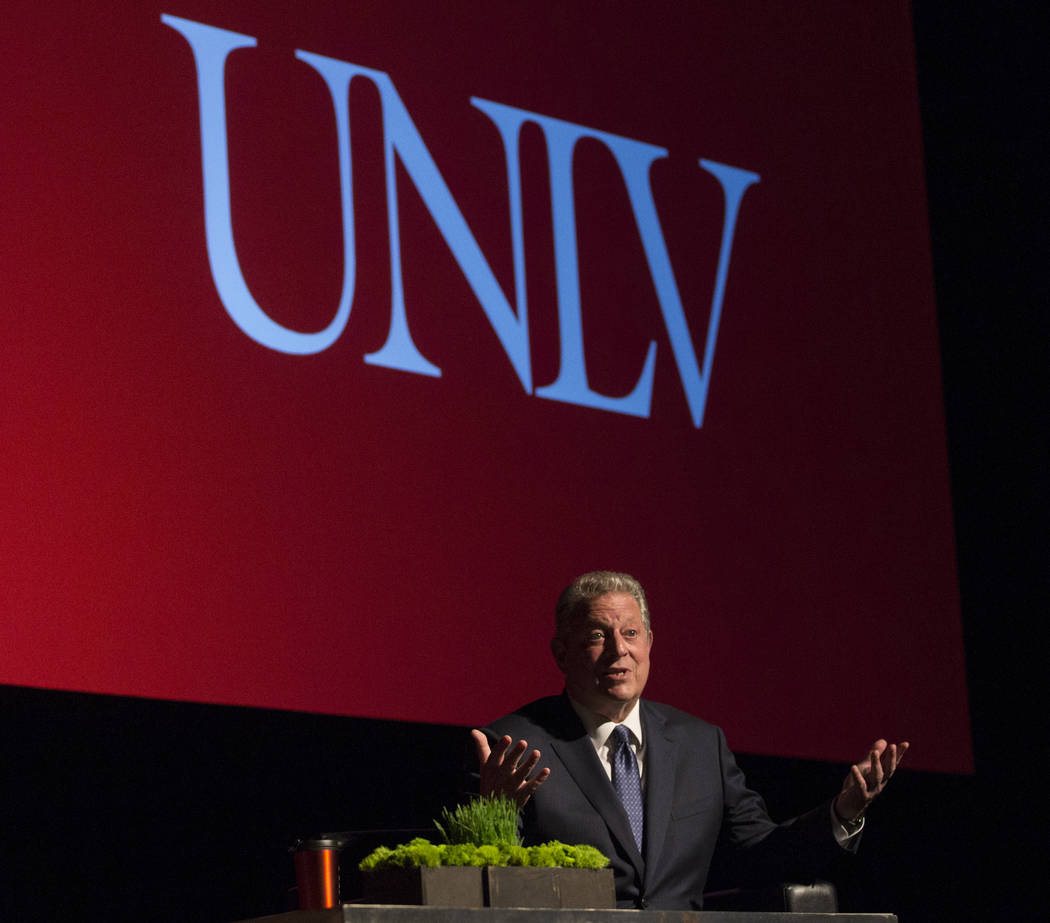 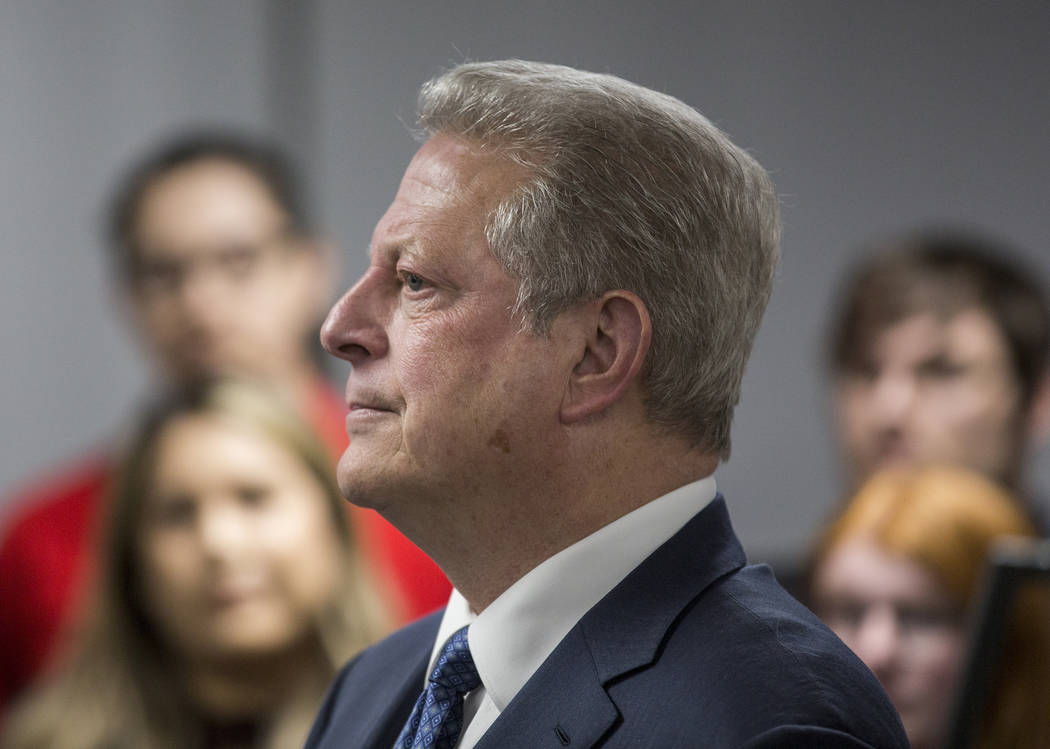 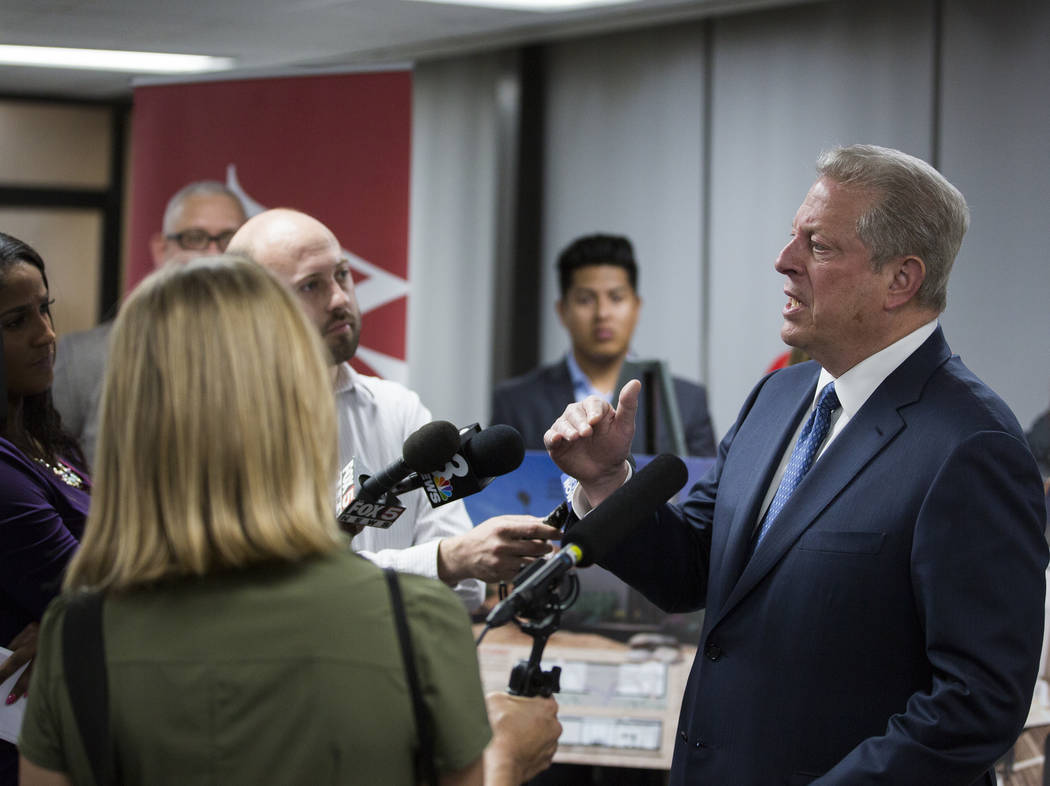 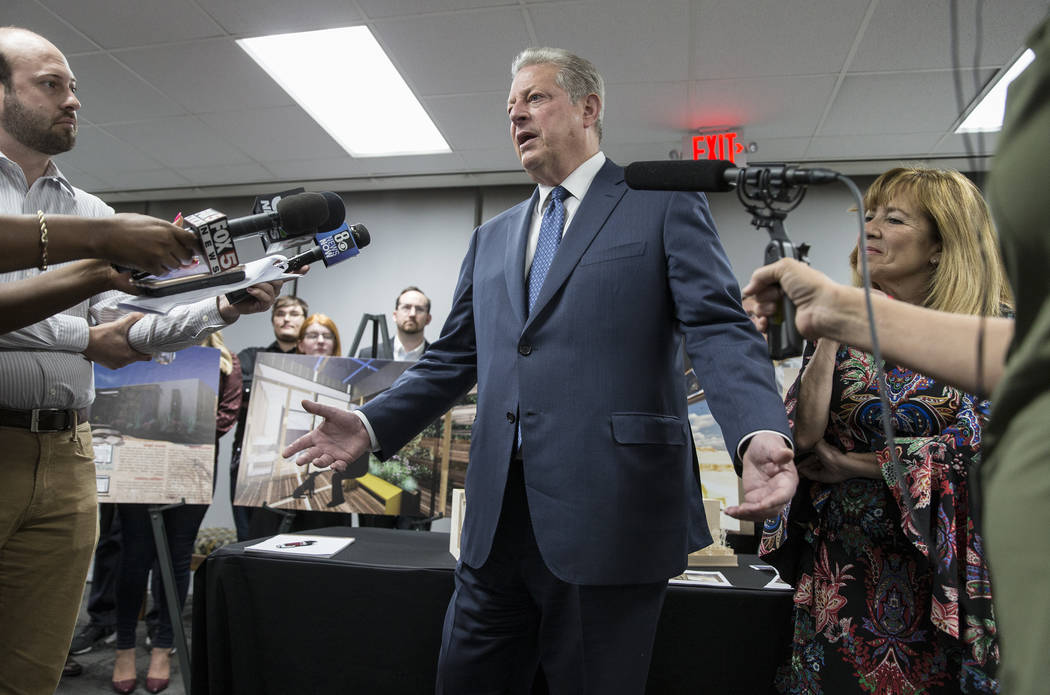 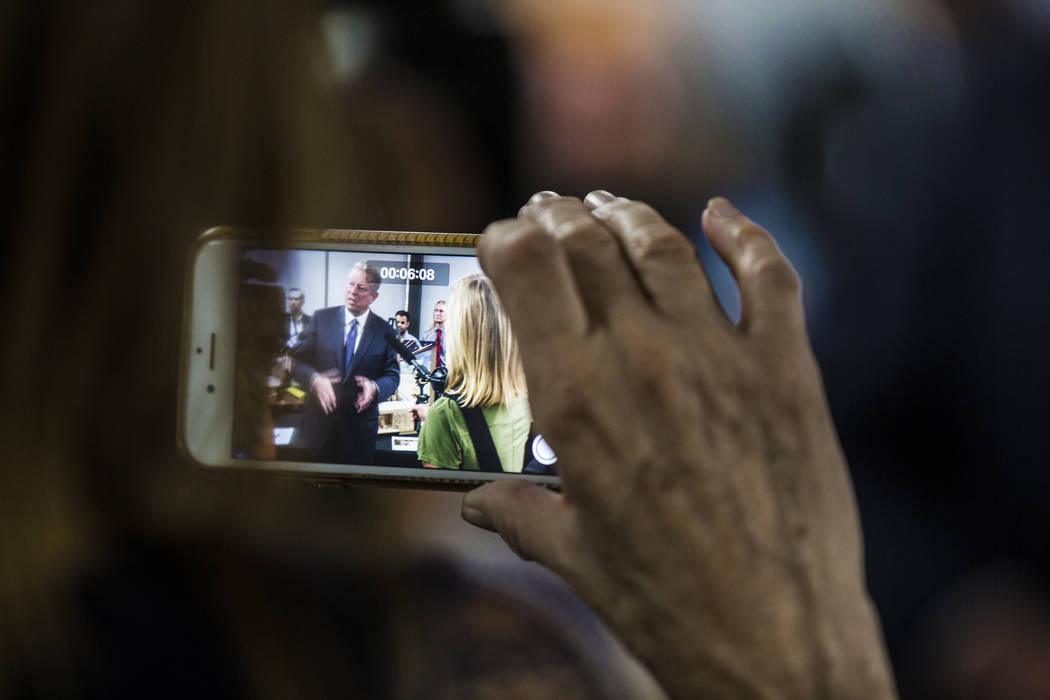 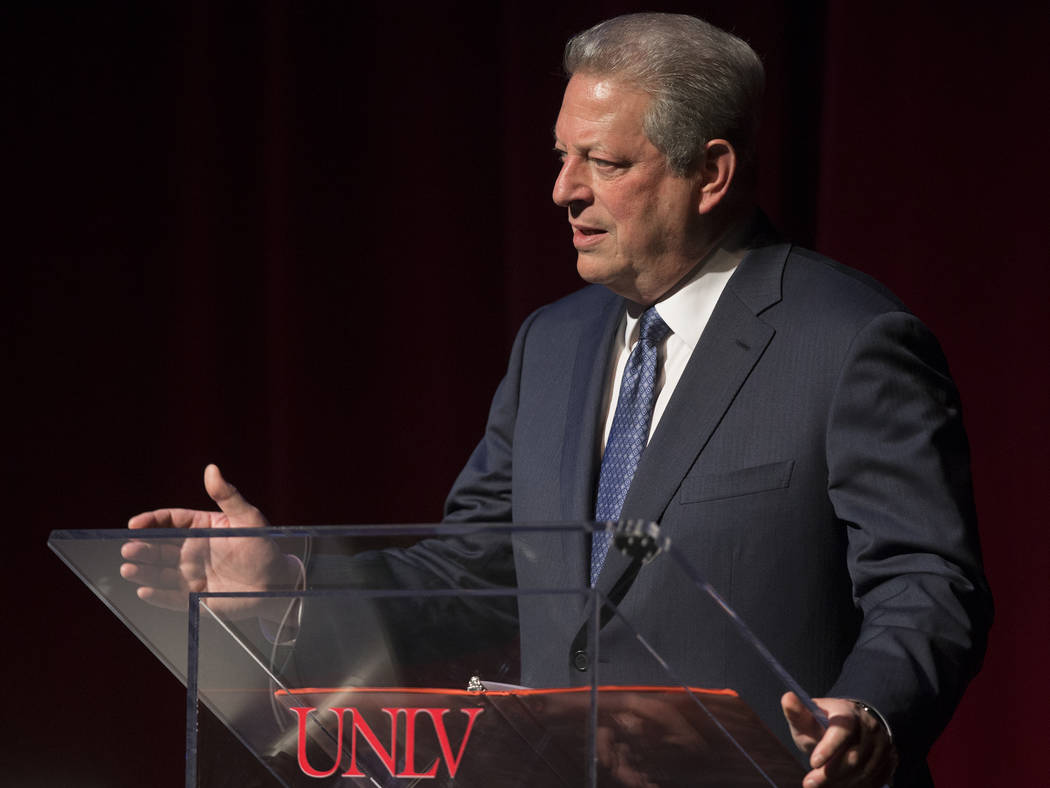 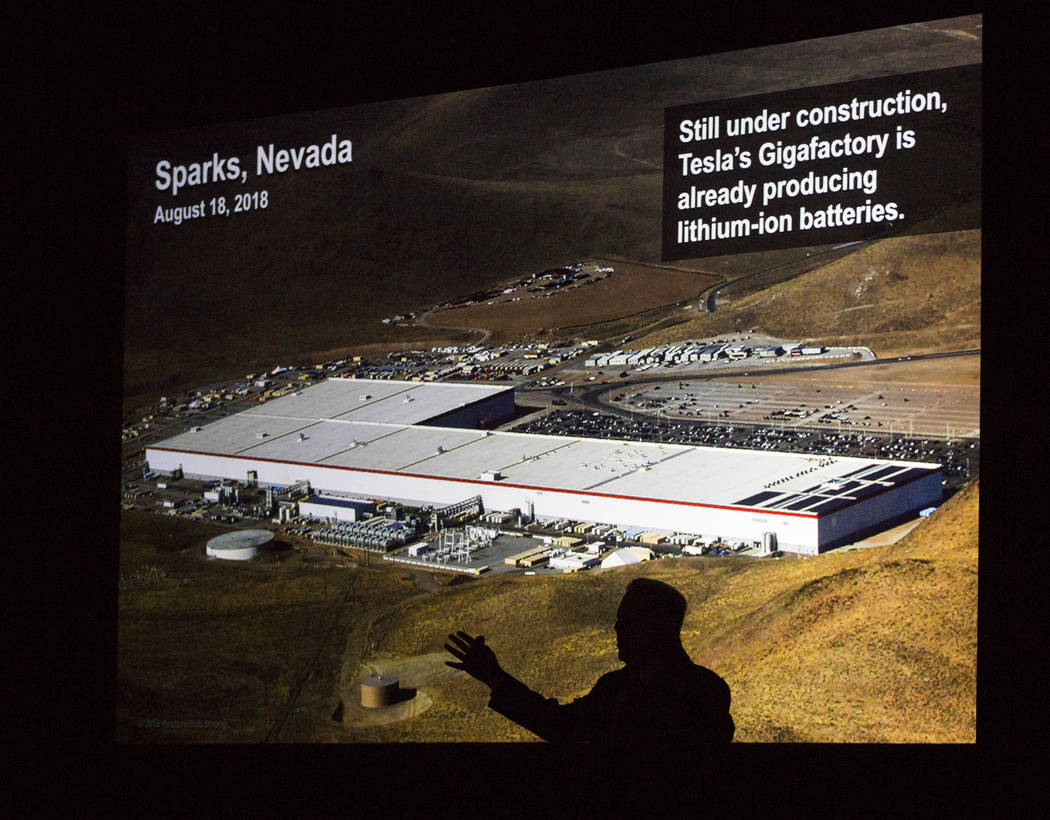 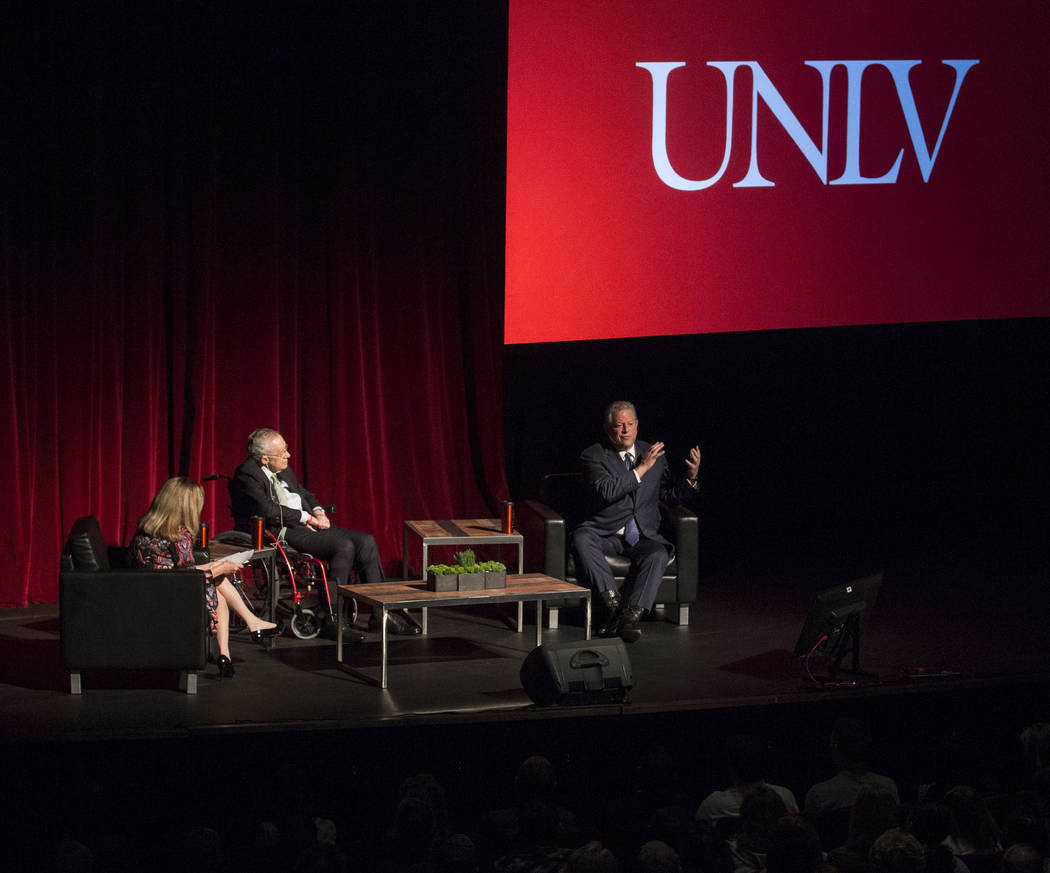 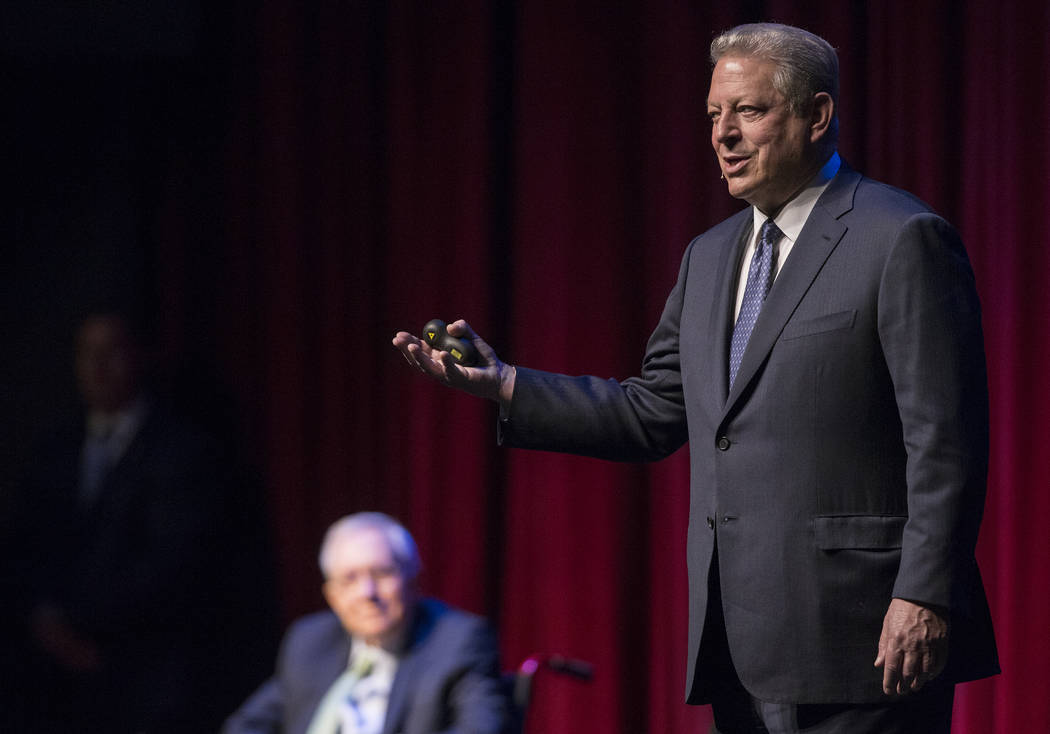 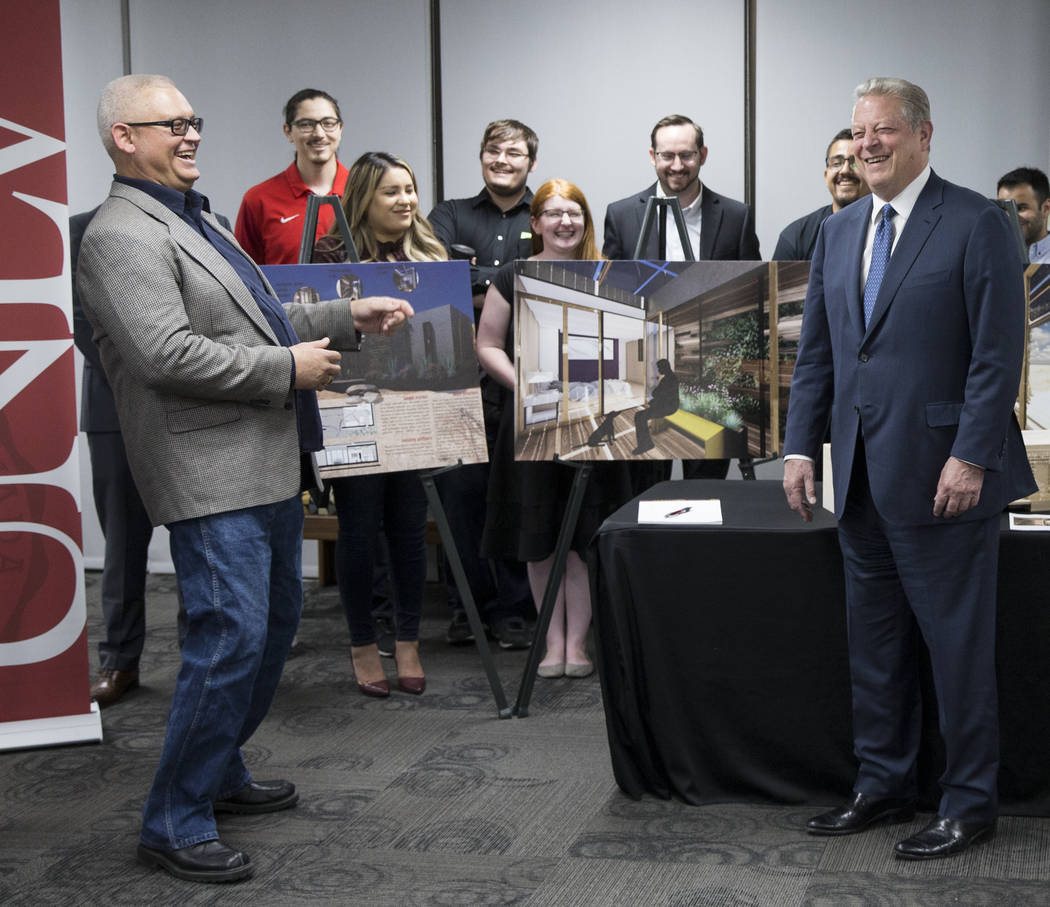 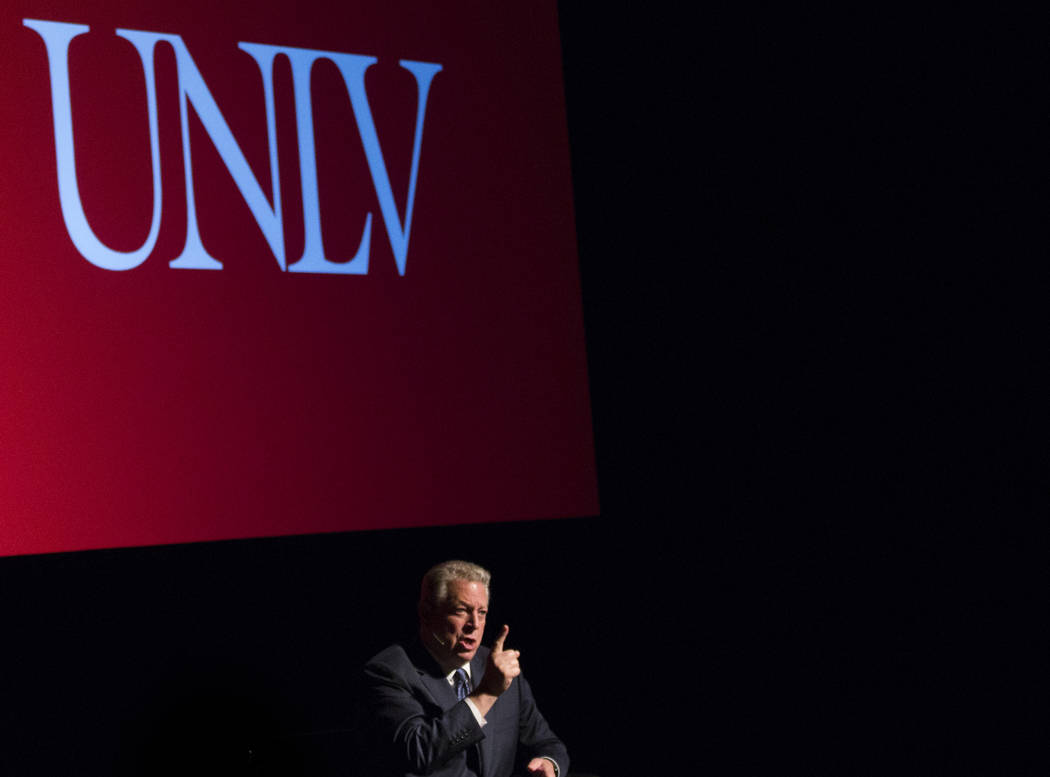 Al Gore is clearly a fan of sequels.

Two years after his last Las Vegas speech on climate change, the former vice president returned to the valley Tuesday with a similar message of alarm and optimism — one punctuated, of course, with lots of his trademark visual aids.

The man featured in not one but two “Inconvenient” documentaries about global warming spoke for about an hour, most of it spent pacing the darkened stage at UNLV’s Artemus Ham Hall in front of his slides.

The first 30 minutes or so was a grim litany of what Gore described as the escalating impacts of climate change. Warming oceans spinning up unprecedented storms. Rising temperatures melting ice at the North Pole in the middle of winter. Worsening droughts, floods and heat waves rendering whole regions uninhabitable. Wildfires scorching the West with record ferocity.

“We need to prepare ourselves for the fact that this is going to get worse,” Gore said.

Some of the slides drew gasps and murmurs from the audience. Others drew laughs and applause, including one featuring a Kentucky coal museum that has installed solar panels on its roof to cut its energy costs.

Gore went on to highlight what he sees as hopeful responses to the climate crisis: The collapse of coal generation in the U.S. and elsewhere, and the explosion of renewable energy development, including in Nevada.

“This transition is happening. We just need to speed it up,” he said.

Gore mostly stayed away from partisan politics, though he did take a few shots at President Donald Trump for his rhetoric about bringing back the coal industry and withdrawing from the U.S. from the global Paris climate accord.

His sharpest comment of the afternoon came while criticizing the federal response to Hurricane Maria, which ravaged Puerto Rico in 2017. “There was a racist element in the response to that,” Gore said. “Puerto Ricans are American citizens.”

During a short press conference before the speech, Gore was asked about the 2020 race for president. “There sure are a lot of people in it,” he quipped.

He did not state preference for any of the candidates, but he said he is encouraged by recent poll results that show climate change as the most important issue by far among Democratic voters.

Gore was invited to speak at UNLV by former Sen. Harry Reid, who sat on stage in a wheelchair as his friend and longtime congressional colleague spoke.

Before the speech, Gore, Reid and acting UNLV President Marta Meana met with the university’s Solar Decathalon team, which is designing and building a self-powered home for a Department of Energy competition next year in Washington, D.C.

UNLV was one of just 11 universities from around the world chosen as finalists for the multidisciplinary competition.

Gore said the team’s work is further proof that Nevada is one of the nation’s “centers of thought leadership” on climate issues.

Gore delivered the keynote address at the Reid-sponsored National Clean Energy Summit in 2017, shortly after the release of the sequel to his Oscar-winning 2006 climate change documentary “An Inconvenient Truth.”

UNLV spokesman Tony Allen said the university did not pay Gore for his appearance.