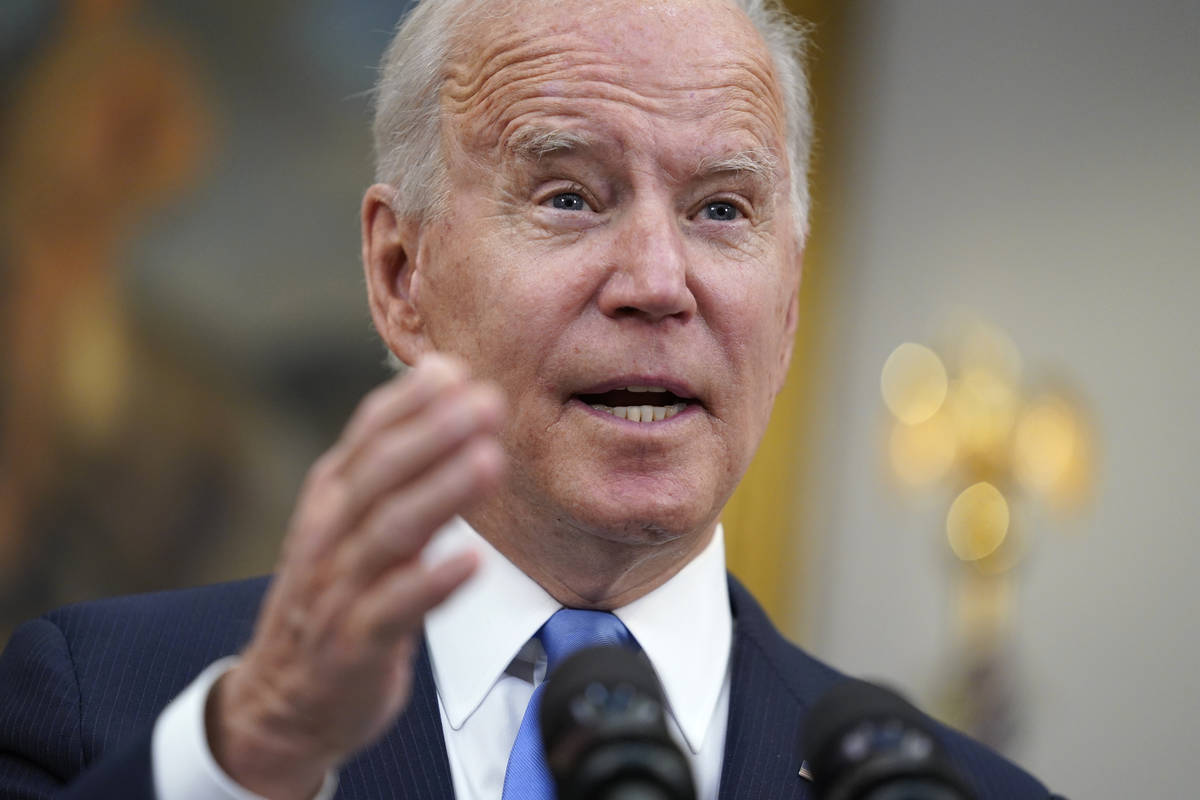 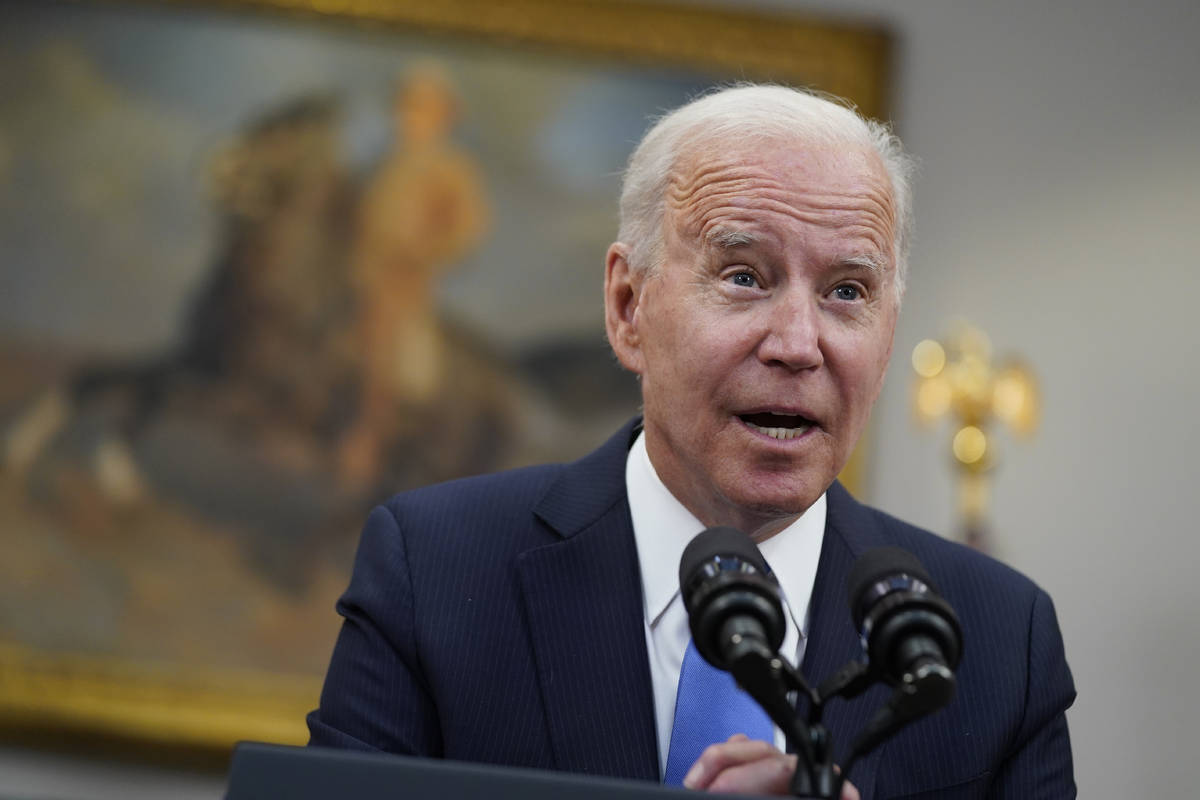 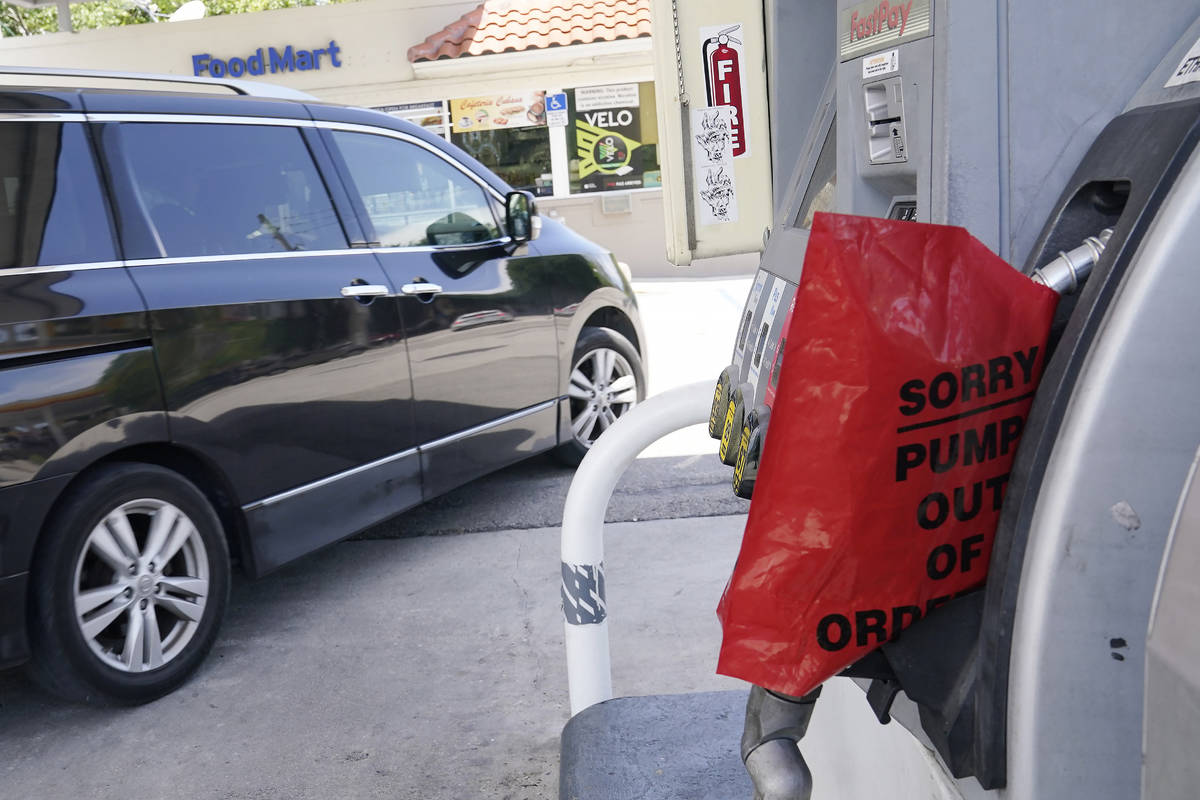 A customer drives from a Chevron station after it ran out of gasoline, Wednesday, May 12, 2021, in Miami. State and federal officials are scrambling to find alternate routes to deliver gasoline in the Southeast U.S. after a hack of the nation's largest fuel pipeline led to panic-buying that contributed to more than 1,000 gas stations running out of fuel. The pipeline runs from the Gulf Coast to the New York metropolitan region. (AP Photo/Marta Lavandier) 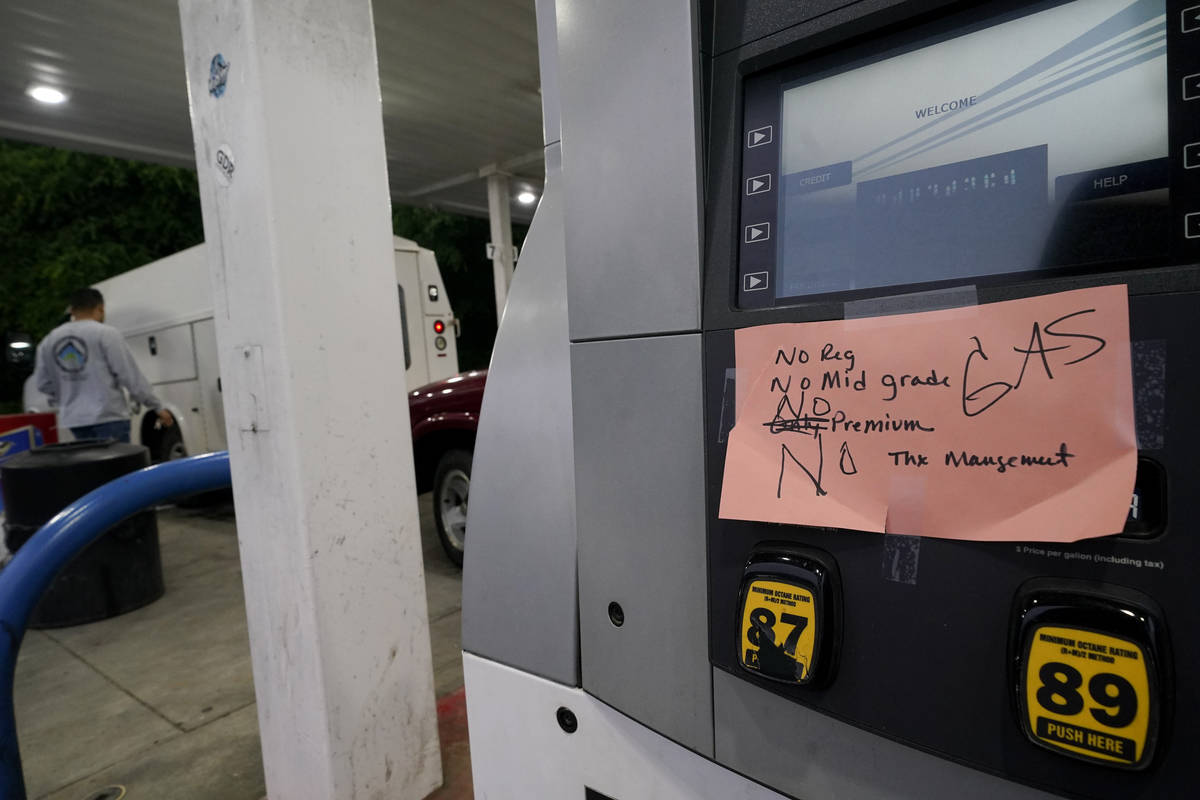 A hand written sign is posted on a gas pump, showing that the service station is out of all grades of fuel Wednesday, May 12, 2021, in Charlotte, N.C. Several gas stations in the Southeast reported running out of fuel, primarily because of what analysts say is unwarranted panic-buying among drivers, as the shutdown of a major pipeline by hackers entered its fifth day. (AP Photo/Chris Carlson) 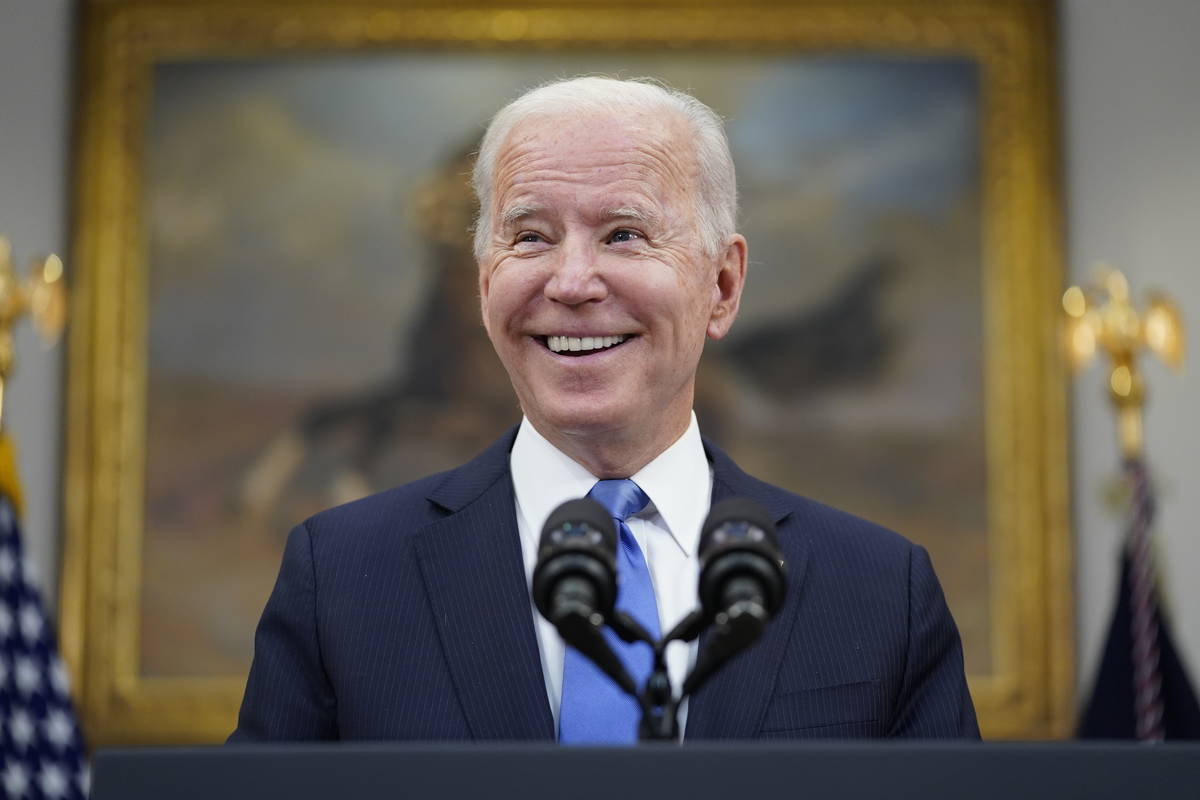 “Do not, I repeat, do not try to take advantage of consumers during this time,” Biden said at the White House. “Nobody should be using this situation for financial gain. That’s what the hackers are trying to do. That’s what they’re about, not us. That’s not who we are.”

The closed pipeline — which reopened Wednesday — posed a fresh set of risks to a presidency still in its early stages. The administration knew it needed to react decisively to fix the problem and ward off Republican critics who were eager to compare Biden to Jimmy Carter, whose own presidency more than four decades ago was stung by a nationwide gas shortage.

70% of NC stations without fuel

About 70% of North Carolina’s gas stations were still without fuel amid panic-buying and about half the stations in Virginia, South Carolina and Georgia were tapped out, GasBuddy.com reported. Washington, D.C., was among the hardest-hit locations, with 73% of stations out, the site’s tracking service showed.

But Biden ascended to the White House as a crisis manager and knows that the possible economic damage from spiking gas prices could also jeopardize his ambitious agenda and Democrats’ control of Congress.

The president said he expects the pipeline to resume normal operations by next week and stressed the importance of improving the durability of U.S. infrastructure as part of his $2.3 trillion jobs plan. Biden said the government would take action to stop future cyberattacks, though he declined to comment on whether Colonial had paid a ransom.

“We do not believe the Russian government was involved in this attack, but we do have strong reason to believe that the criminals who did the attack, are living in Russia,” he said. “We’re also going to pursue a measure to disrupt their ability to operate. And our Justice Department has launched a new task force, dedicated to prosecuting ransomware hackers to the full extent of the law.”

A cyberattack by hackers who lock up computer systems and demand a ransom to release them hit the pipeline on Friday. The hackers did not take control of the pipeline’s operations, but Colonial shut it down to contain the damage.

The U.S. was in direct communication with Moscow about the need to take action against ransom networks, Biden said. The FBI has said the ransomware belonged to a criminal syndicate known as DarkSide.

The administration had been highlighting its efforts to deliver gas to service stations in affected areas. After ransom-seeking hackers shut down the pipeline last Friday, Biden’s team understood the risk of 45% of the East Coast’s gas being unavailable as lines of autos began to snake around service stations and drivers loaded up on as much fuel as possible.

The president said Thursday the “extraordinary measures” being taken had been enough to fill the fuel tanks of 5 million vehicles in the past few days, a response to service stations in Georgia, North Carolina, South Carolina and Virginia running out of gas.

Rules were relaxed so that pipeline operators could run their systems manually, instead of relying on computers. Emergency orders lifted the highway weight restrictions and expanded the hours that fuel could be transported. The Environmental Protection Agency issued waivers on gas blends and other regulations to ease supply challenges.

The cyberattack showed the daily barrage of events that can quickly derail the White House’s focus on the coronavirus pandemic. Republican lawmakers found an opening after the shutdown to blast Biden for previously canceling plans to construct the Keystone XL oil pipeline from Canada. The president had canceled that permit citing risks of spills and worries that climate change would worsen with the burning of oil sands crude that would have flowed through the pipeline.

“We now have gas lines we haven’t had since Jimmy Carter,” House Republican leader Kevin McCarthy said during a TV interview on Fox Business.

World events have disrupted the Biden administration’s control of its economy narrative. Over the past week, it has faced a disappointing monthly jobs report, worrisome signs of inflation and escalating violence in Israel with deaths that could foreshadow a war. All the while, Biden is still attempting to vaccinate the nation against the coronavirus, distribute hundreds of billions of dollars in economic aid and negotiate his own infrastructure and families plans that total a combined $4 trillion.

Republican lawmakers saw a chance with the cyberattack to go after Biden’s competency and improve their own political chances. The 1979 oil shock contributed to Carter losing his reelection campaign a year later to Ronald Reagan.

The political risks of energy costs go beyond America. The World Bank published research last year that found an oil price spike a year before an election would “systematically lower the odds of incumbents being reelected.” It did not matter if the politicians were liberal or conservative based on the analysis of 207 elections across 50 democracies.

Key ways for Biden to respond have included showing he understands how rising gas prices can hurt family budgets as well as moving quickly to help fix the pipeline problem.

“It’s important for the president to show empathy and recognize the position that the average American is in vis-à-vis gas prices,” said Mark Jones, a political science professor at Rice University in Houston. “Gas prices are something that don’t affect the elite — and our politicians are all among the elite.”