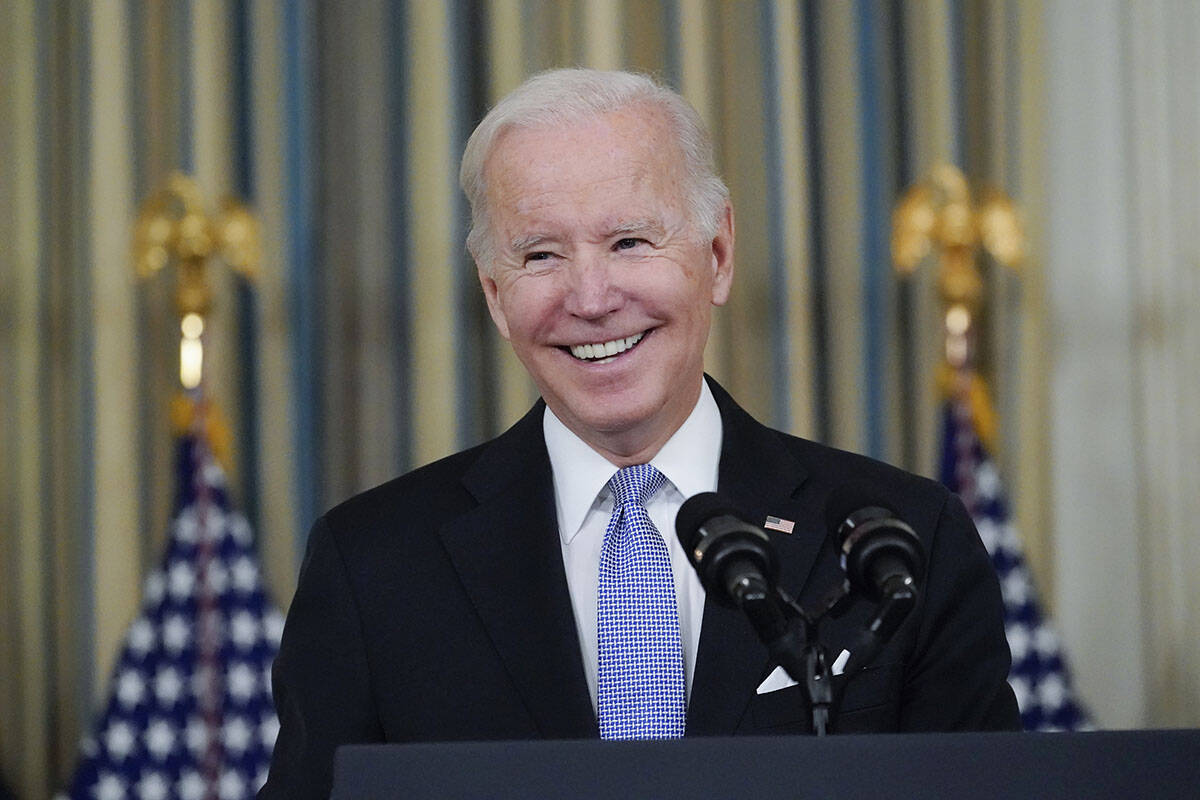 President Joe Biden speaks about the bipartisan infrastructure bill in the State Dinning Room of the White House, Nov. 6, 2021, in Washington. The $1 trillion infrastructure bill that President Joe Biden signs into law on Monday, Nov. 15, represents a historic achievement at a time of deeply fractured politics. But the compromises needed to bridge the political divide suggest that the spending might not be as transformative as Biden has promised for the U.S. economy. (AP Photo/Alex Brandon, File)

“America is moving again, and your life is going to change for the better,” Biden told a large crowd gathered on the White House lawn to watch him sign the legislation.

The $1.2 trillion bipartisan infrastructure bill will send $4 billion to Nevada and increased federal funding to every state and the District of Columbia to improve highways, bridges, water systems, airports, public transit and high-speed internet.

Nevada Sens. Catherine Cortez Masto and Jacky Rosen, who helped write portions of the bill, and Reps. Susie Lee and Dina Titus, a senior member of the House Transportation and Infrastructure Committee, attended the signing ceremony.

“Everybody was upbeat,” Titus told the Review-Journal as she walked off the White House lawn. “I think it’s a new day.”

Cortez Masto said the bill would create high-paying jobs for Nevada while Rosen said Congress “fulfilled our promise” to work across party lines and deliver an infrastructure bill.

Signing the bill is a monumental legislative victory for Biden, with Republican support in the House and Senate — an accomplishment that even former President Donald Trump failed to achieve despite promising to pass a $1 trillion infrastructure bill.

Republican and Democratic governors — including Gov. Steve Sisolak of Nevada — mayors, business groups and trade unions supported the legislation that is expected to create millions of high-paying jobs following a crippling coronavirus pandemic.

Just before the signing, Biden tapped former New Orleans Mayor Mitch Landrieu to implement the infrastructure plan, citing his experience following Hurricane Katrina. Biden said he appointed Landrieu to lead a task force and officials to make sure the money “is used wisely and spent well.”

Specifically, Nevada will receive $2.5 billion in money for highway projects to include Interstate 15 between Las Vegas and Los Angeles and Interstate 11 from Las Vegas to Phoenix, according to Ryan McInerney, Nevada Department of Transportation director of communications.

Highway projects to be funded with money from the bill will be determined by each state. While populous states receive larger amounts of funding due to formulas, the least populous states, like Alaska and Montana, are slated to receive the most federal funding per capita.

Nevada is expected to receive $293 million for airports over the five-year span of the law, $459 million for public transportation and $225 million for bridge repairs.

Written in the Senate, $400 million was included by Cortez Masto, and Lee, both Nevada Democrats, for a water recycling project that would benefit residents in the state and in California.

Rosen was part of a bipartisan group that wrote provisions to expand high-speed internet access.

That provision would make available $100 million to provide access to rural and underserved communities and financial assistance to roughly 825,000 low-income residents who cannot afford the service.

Nevada also will see spending for wildfire prevention and charging stations for electric cars. Affordable housing construction and renovation of schools is also included, according to the White House.

One provision of the bill directs money to build charging stations for electric vehicles, which use batteries containing lithium that is extracted and processed in Nevada, though not without environmental concerns.

“We need the jobs,” Titus said. “I think you’ll see a lot of that in the electric car industry.”

Sisolak hailed the signing of the bill.

“The historic Infrastructure Investment and Jobs Act will make life better for millions of Nevada residents, create a generation of good-paying union jobs and economic growth, and position our State and nation toward a path of success,” the governor said in a statement.

“As we rebuild, our focus remains on strengthening our clean power production, enabling access to high-speed internet across our State, and helping improve sustainable transportation options for the over 3 million Nevadans who call this State their home,” he added.

Republican Rep. Mark Amodei of Carson City supported infrastructure projects in the legislation, but joined most House GOP lawmakers in voting against the bill because it was initially coupled with the larger $1.85 trillion social spending package.

In the Senate, Marsha Blackburn, R-Tenn., voted against the bill saying it was a “gateway to the Green New Deal and the socialist ‘build back broke’ agenda.”

Trump urged GOP House members to vote against the infrastructure bill, despite his proposal of a similar bill during his administration. Trump is eyeing a 2024 presidential race.

But Sen. Rob Portman, R-Ohio, spoke at the White House ceremony to describe the bipartisan effort that produced a bill Republicans and Democrats could pass.

Thirteen GOP lawmakers in the House crossed party lines to approve it.

Senate Minority Leader Mitch McConnell, R-Ky., was among 19 Republicans in the Senate who voted for the bill in the Senate earlier this year.

Six liberal Democrats in the House voted against it over mistrust of Democratic centrists’ support of social spending for clean energy initiatives and social programs.

Another big bill to come

The bill signing ceremony comes as Biden tries to shore up support of the social spending package, known as the Build Back Better Act, that could see a House vote this week.

He urged lawmakers gathered Monday at the White House to push forward and pass the $1.85 trillion bill to further provide economic gains for working families. The bill would raise taxes on the wealthy and a minimum corporate tax to fund the social programs.

Biden first unveiled a $3.5 trillion social spending package, only to see Senate centrist Democrats, Joe Manchin of West Virginia and Kyrsten Sinema of Arizona, slash it in half.

The White House gave Sinema a speaking role at the infrastructure signing ceremony as it continues to negotiate passage of the bill before the House and Senate.

Biden is pushing his legislative economic agenda as his approval ratings sink to a new low of 41 percent of 1,100 adults, according to an ABC News-Washington Post poll conducted Nov. 7-10. The margin of error was plus- or minus-3.5 percentage points.

Passage of the infrastructure bill was seen as critical after Democrats lost the Virginia governor’s race earlier this month, a contest considered a bellwether for midterm elections in 2022.