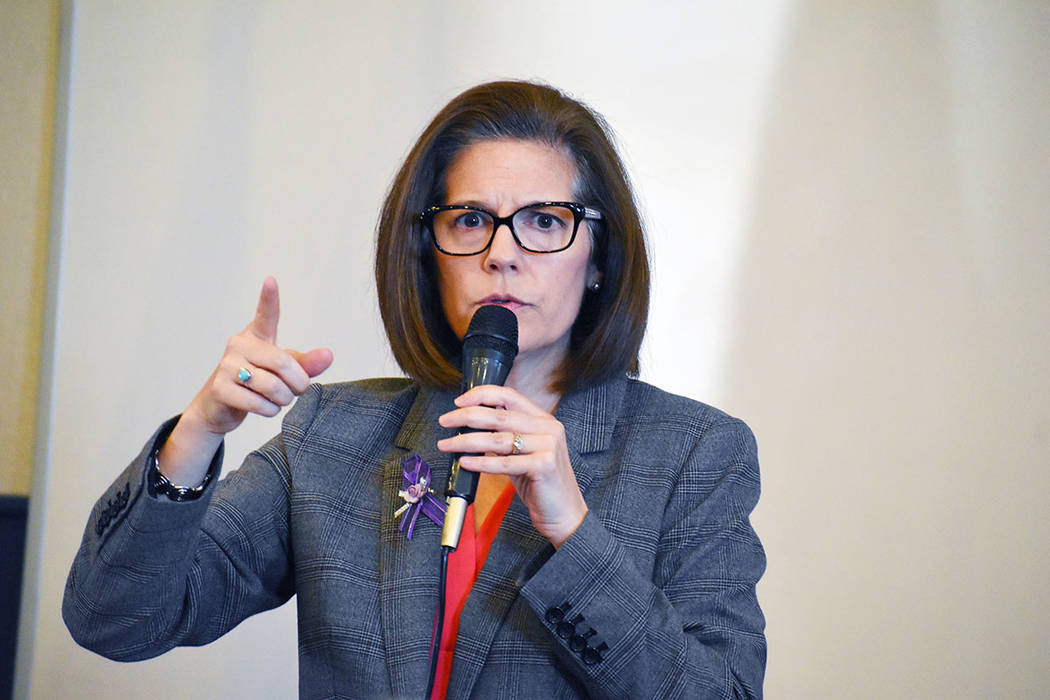 “He’s obviously taking a look at her, I think that is good,” former Senate Majority Leader Harry Reid told the Review-Journal.

Reid said he and Biden served together in the Senate and have remained close. “He is my friend,” Reid said.

The former Nevada senator said Biden “has a clear path to the nomination.” But selecting a Latino or African American would boost the campaign.

“It would help Biden a lot,” Reid said.

Selecting Cortez Masto, or another Latina, would energize voters in the nation’s fastest-growing minority group and a key electoral bloc in swing states that not only include Nevada but also Colorado, Arizona and Florida, political consultants and Latino advocates said.

Such a choice could shore up Biden’s mediocre support among Hispanics as President Donald Trump’s re-election campaign courts the Latino voting bloc through outreach efforts in key states.

A Biden pick of Cortez Masto “would help by the boatloads,” said Jose Dante Parra, a Democratic political consultant and chief executive director of Prospero Latino, with offices in Miami and Washington.

“The Hispanic community has never found itself on the ticket,” Parra said in a telephone interview. “It would be a big shot in the arm for Biden.”

Biden in a televised debate promised he would select a woman as a running mate.

Others mentioned are Minnesota Sen. Amy Klobuchar, Michigan Gov. Gretchen Whitmer and Georgia Democrat Stacey Abrams, who lost a bid for governor in 2018. Abrams is campaigning for the Biden campaign to select an African American for the ticket.

Biden’s presidential campaign was brought back to life with the African American vote in South Carolina after a string of losses to rival Bernie Sanders in Iowa, New Hampshire and Nevada.

And while Abrams appears to be gunning for the job, Cortez Masto, Whitmer and Lujan Grisham are not.

“I’m not thinking about that,” Cortez Masto responded when asked about the speculation in a telephone interview with the Review-Journal.

“Right now, the focus is right here in Nevada,” Cortez Masto said of her priority to help the state recover from the public health and economic impact of the coronavirus outbreak.

Adding to the ticket

But political analysts, and Latino advocacy groups, are eyeing the chessboard and weighing the strengths and weaknesses of the potential vice presidential picks for the Democratic ticket.

Cortez Masto, a former Nevada attorney general and the first Latina elected to the Senate, would be a factor in energizing the Latino and suburban women support in swing states like Nevada but also Colorado, Arizona and Florida, analysts and consultants said.

Although lacking in national name recognition, she would naturally help Biden with Latino voters who remain tepid over Biden’s candidacy, advocacy groups note.

In Nevada, where Cortez Masto declined to publicly back a Democratic candidate in the February caucuses, Biden lost the Latino vote to Sanders, who received more than 51 percent of support compared to roughly 17 percent for Biden.

More alarming, 47 percent of Nevada Latino voters who identify as moderate or conservative supported Sanders, a progressive, compared to the more moderate Biden, who was at 19 percent, according to caucus entry polls in February.

Meanwhile, the national poll by Latino Decisions over community concerns about the coronavirus pandemic found 59 percent of Hispanic voters prefer Biden, compared to 22 percent who would vote for Trump. The poll of 1,200 registered Latino voters was commissioned by Henry Munoz of San Antonio, the former Democratic National Committee finance chairman. It has a margin of error of 2.8 percentage points.

That margin for Biden “is not where it needs to be,” said Parra. “Hillary Clinton got 66 percent and she still lost. It needs to be upwards of 70 percent.”

Parra noted that the Trump campaign is making efforts to reach out to Hispanic voters in states like Florida, where he received roughly 28 percent of the Latino vote that helped win the state and propel him to the White House in 2016.

“He doesn’t need to win the vote, he needs to erode the margins,” Parra said of Trump’s efforts to gain support with the Latino community.

Latinos for Trump was launched and rolled out in Florida with Vice President Mike Pence and Lt. Gov. Jeanette Nunez.

Demographically, Cortez Masto or another Latina pick could help in states like Arizona and Texas, which Democrats are trying to turn blue, said J. Miles Coleman, associate editor of Sabato’s Crystal Ball, a political newsletter from the University of Virginia Center for Politics.

Coleman noted that what plays in Cortez Masto’s favor is that in past elections, presidential nominees tended to select senators more than governors as running mates.

In terms of Cortez Masto’s bona fides, she is well known in her state but lacks the name recognition nationally that other potential running mates have.

“In terms of her career trajectory, she’s very similar to Kamala Harris: Both served as attorneys general of neighboring states before being elected to the Senate,” Coleman said.

“In fact, before their time in the Senate, they worked together on some issues, such as mortgage fraud,” Coleman added.

Latino advocacy groups, such as Mi Familia Vota and Latino Victory Fund, have endorsed Cortez Masto as a pick that can energize the Hispanic vote.

And her Senate colleague from Nevada, Jacky Rosen, said she was “pleased to see such a large group of qualified women senators being considered for the vice presidential nomination.”

“While I believe that any one of them would serve our country admirably,” Rosen called Cortez Masto a trailblazer with legislative and executive experience.

“I cannot think of anyone better to become the first female vice president of the United States of America,” Rosen said.

Cortez Masto has a powerful ally in Reid, who helped boost her run for Senate when Reid decided not to seek re-election in 2016. Reid and Biden have a good relationship not only from their service in the Senate, but also during Biden’s time in the White House. Biden once described Reid as having a “spine of steel.”

But other candidates are front and center as well.

Klobuchar, a moderate from Minnesota who dropped out of the presidential race, is campaigning for Biden and could be helpful with suburban women voters whose support helped Democrats retake control of the House in 2018. Klobuchar also conducted a Women for Biden webcast last week

Whitmer endorsed Biden before the primary in Michigan, considered a “must win” state for Democrats to take back the White House. She recently has become a foil to Trump over her restrictive closure orders in the state.

Harris has said it would be an honor to serve with Biden, as has Warren, considered a progressive who may appeal to voters who formerly supported Sanders over Biden in the primary.

Although impressed with the field, Reid said Biden would be best served by selecting a Latina or an African-American running mate.

The importance of the Hispanic vote is not lost on Reid, who faced a serious re-election Senate bid in 2010 when his opponent, Republican former Assemblywoman Sharron Angle, falsely accused him of giving “tax breaks to illegal aliens.”