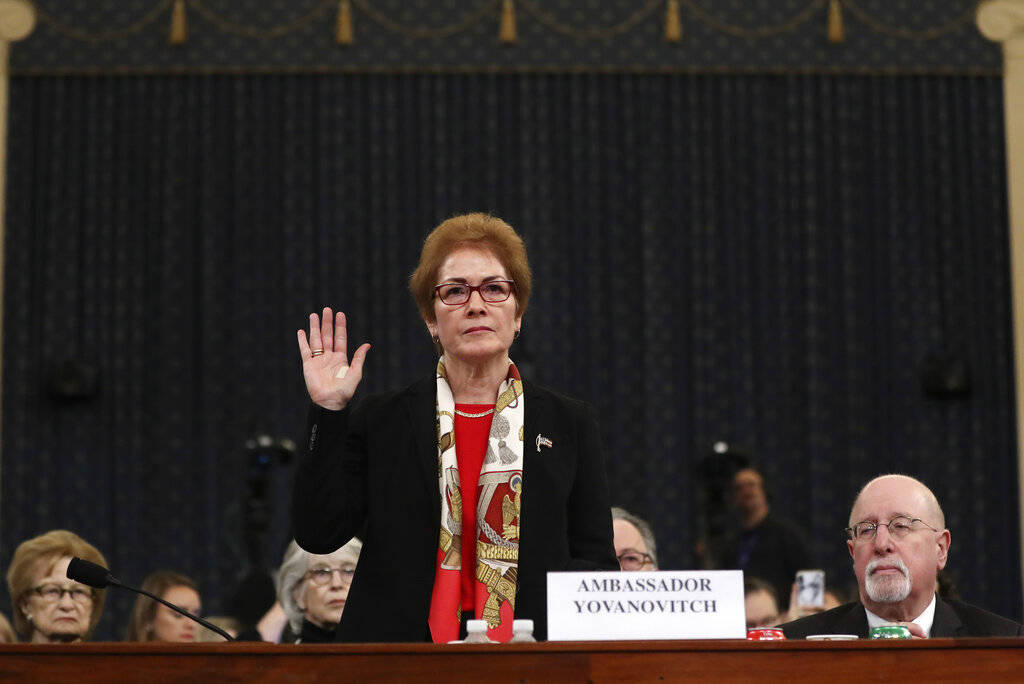 Former U.S. Ambassador to Ukraine Marie Yovanovitch is sworn in to testify to the House Intelligence Committee on Capitol Hill in Washington, Friday, Nov. 15, 2019, during the second public impeachment hearing of President Donald Trump's efforts to tie U.S. aid for Ukraine to investigations of his political opponents. (AP Photo/Andrew Harnik) 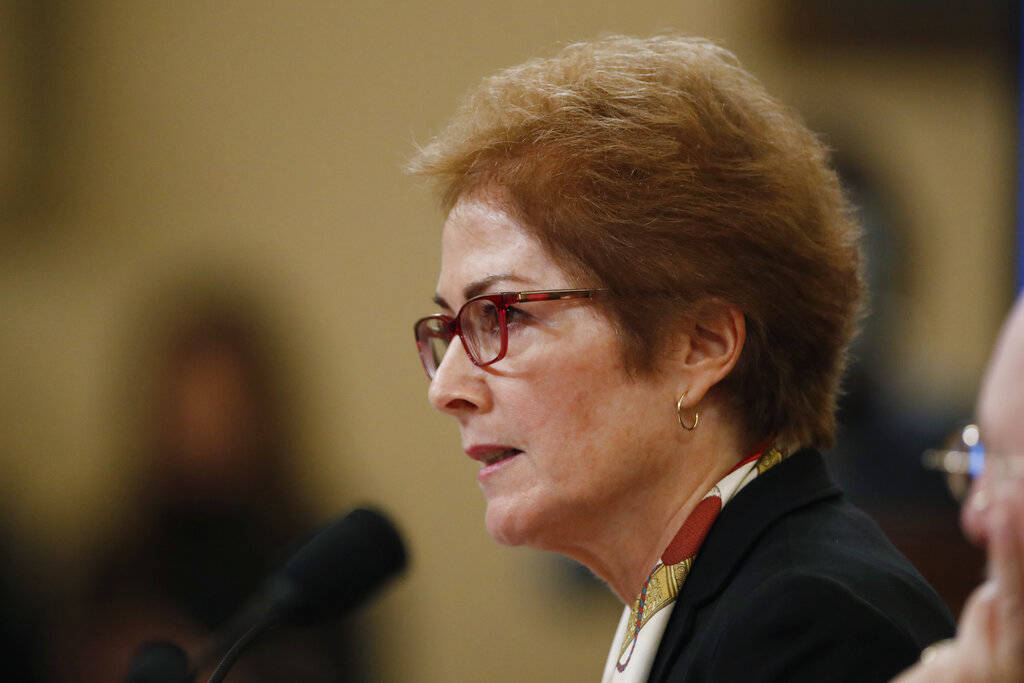 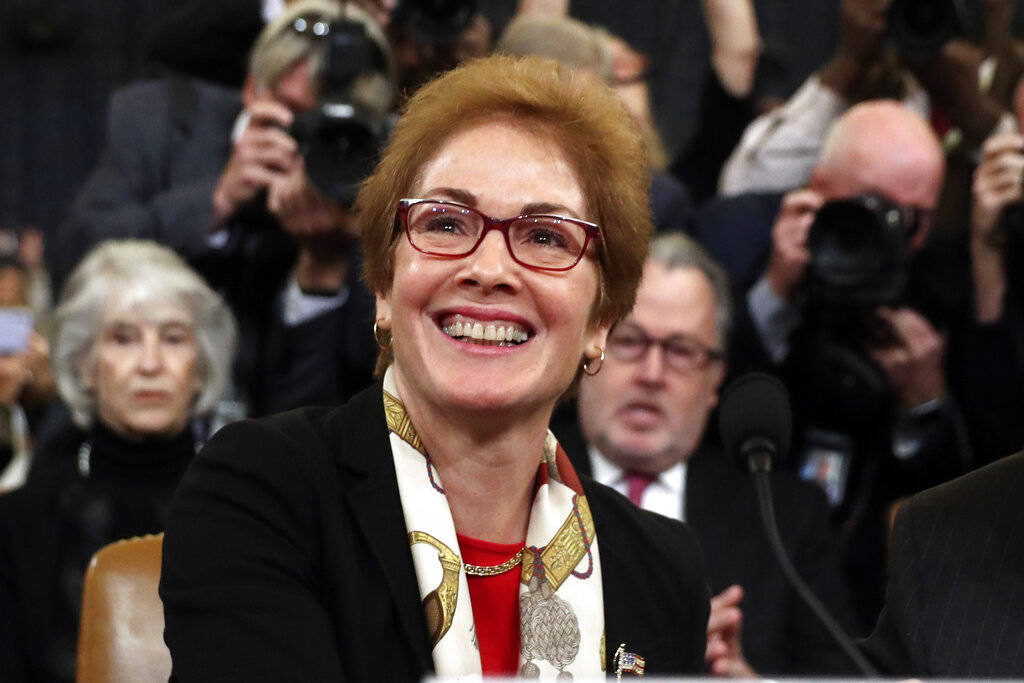 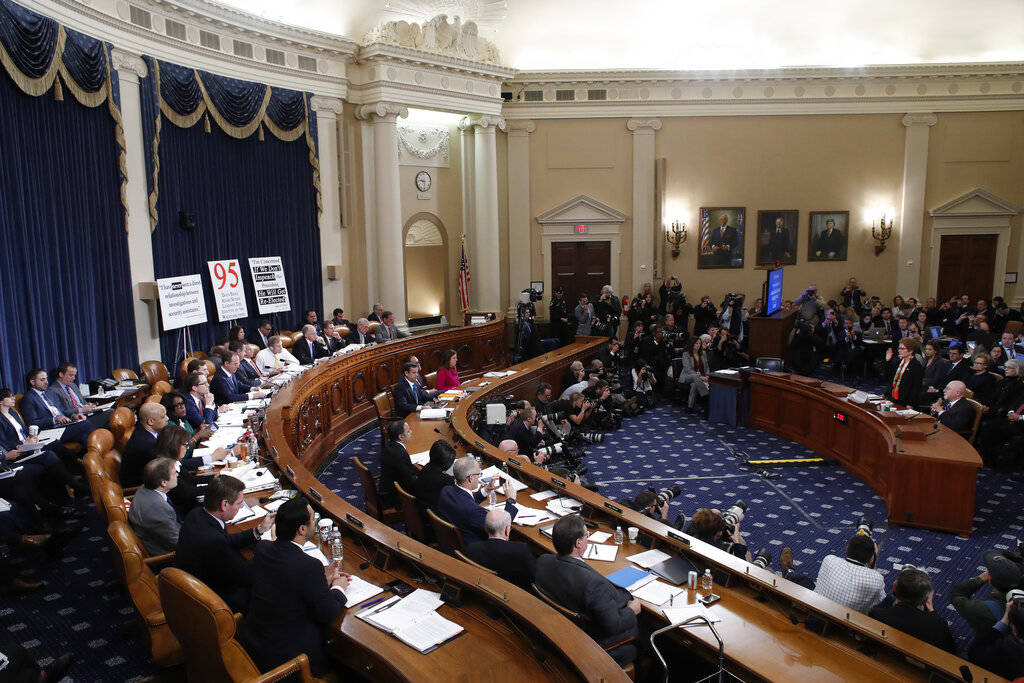 Former Ambassador to Ukraine Marie Yovanovitch is sworn in to testify before the House Intelligence Committee on Capitol Hill in Washington, Friday, Nov. 15, 2019, during the second public impeachment hearing of President Donald Trump's efforts to tie U.S. aid for Ukraine to investigations of his political opponents. (AP Photo/Alex Brandon, Pool) 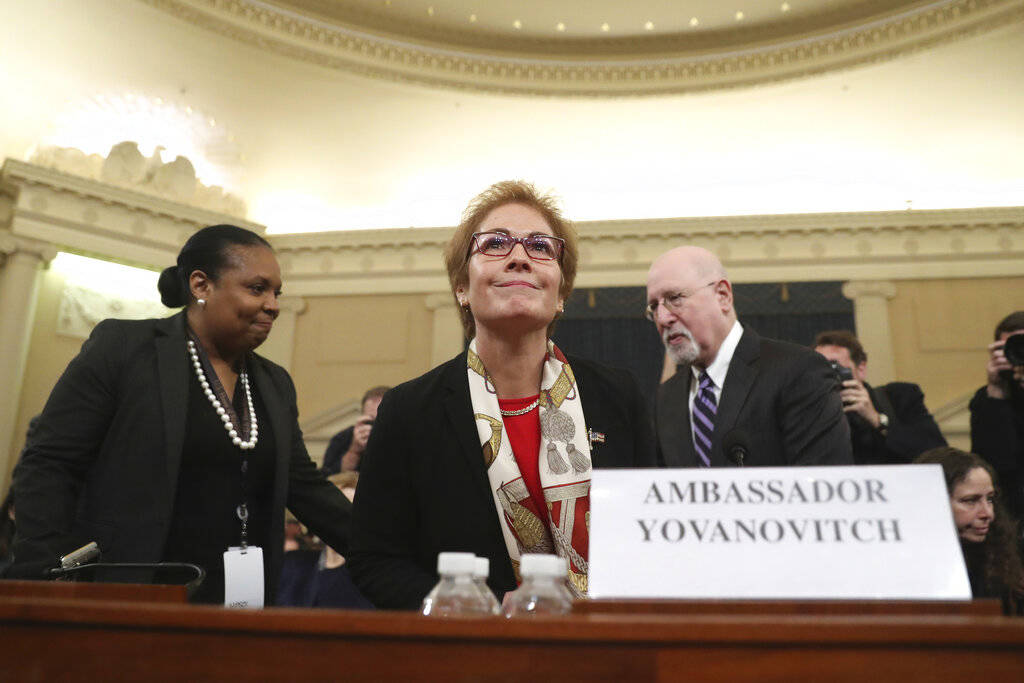 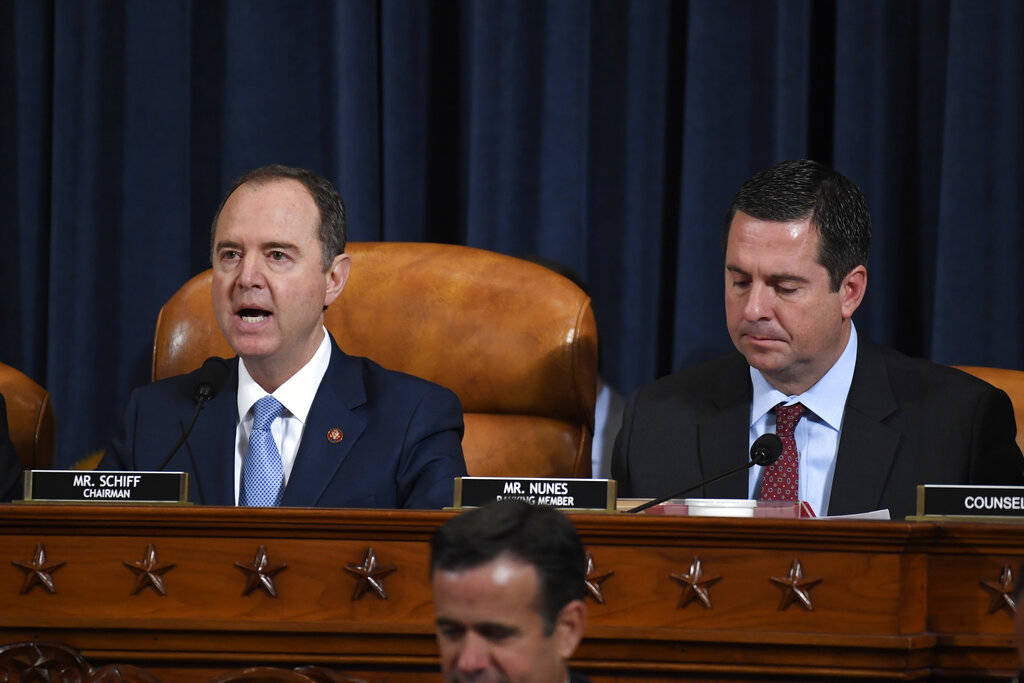 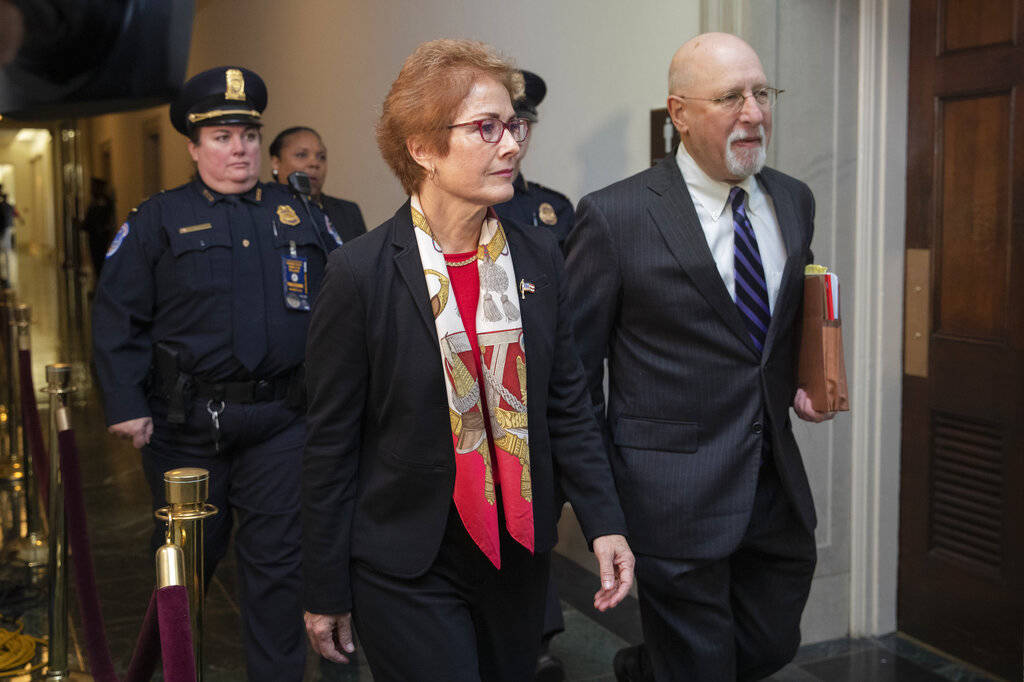 Former U.S. Ambassador to Ukraine Marie Yovanovitch walks to the hearing room to testify to the House Intelligence Committee, Friday, Nov. 15, 2019, on Capitol Hill in Washington, in the second public impeachment hearing of President Donald Trump's efforts to tie U.S. aid for Ukraine to investigations of his political opponents. (AP Photo/Manuel Balce Ceneta) 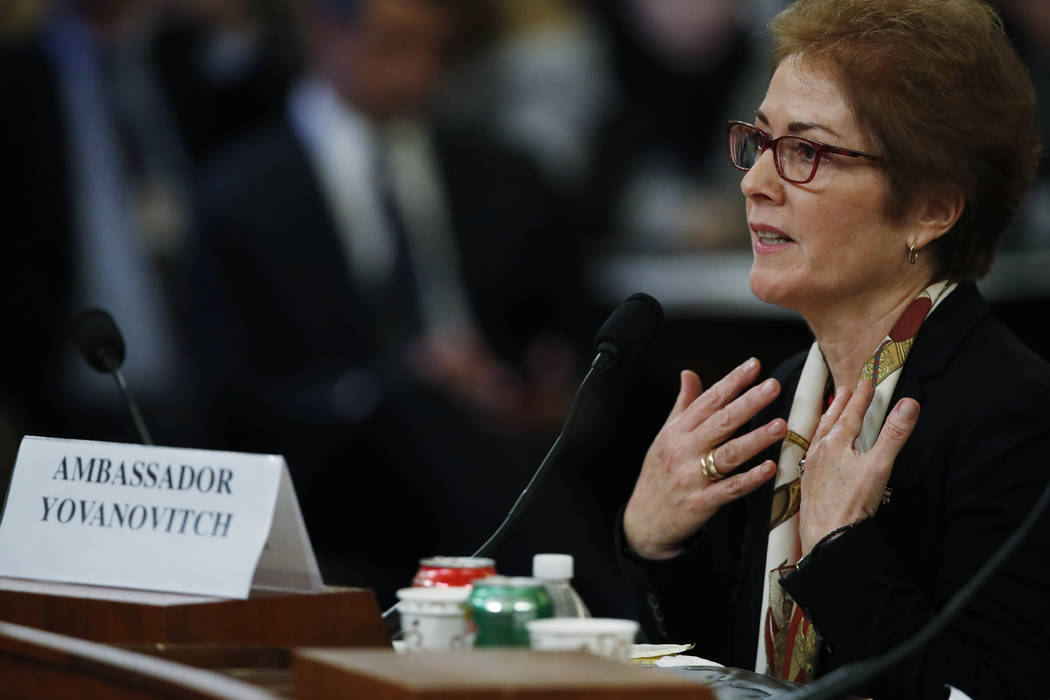 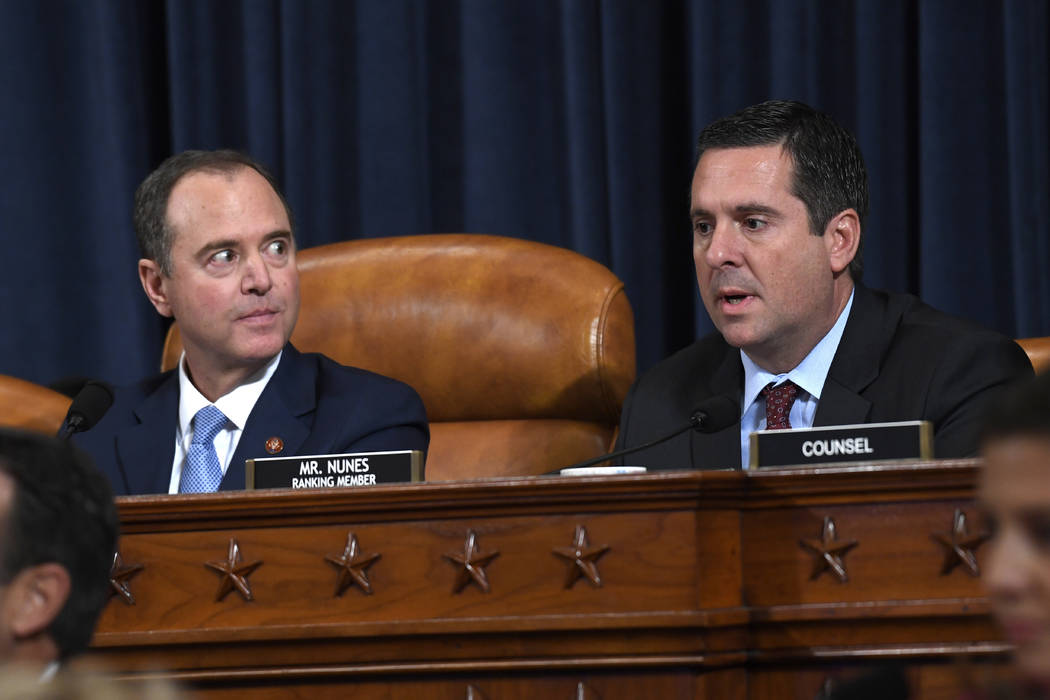 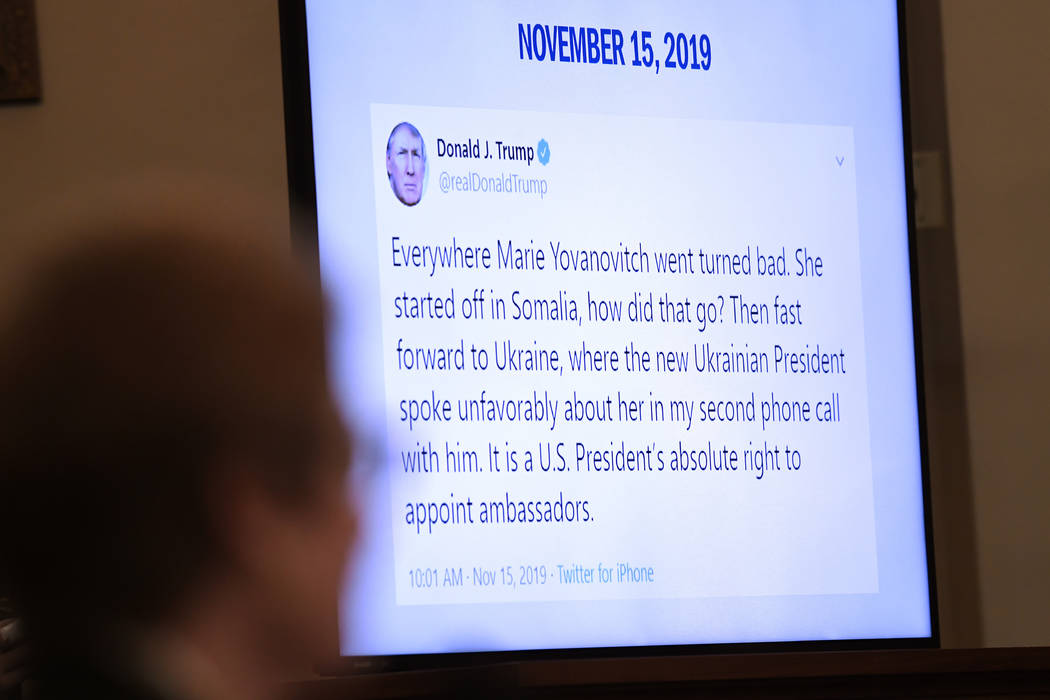 A tweet from President Donald Trump is displayed on a monitor as former U.S. Ambassador to Ukraine Marie Yovanovitch, left, testifies before the House Intelligence Committee on Capitol Hill in Washington, Friday, Nov. 15, 2019, in the second public impeachment hearing of President Donald Trump's efforts to tie U.S. aid for Ukraine to investigations of his political opponents. (Susan Walsh/AP) 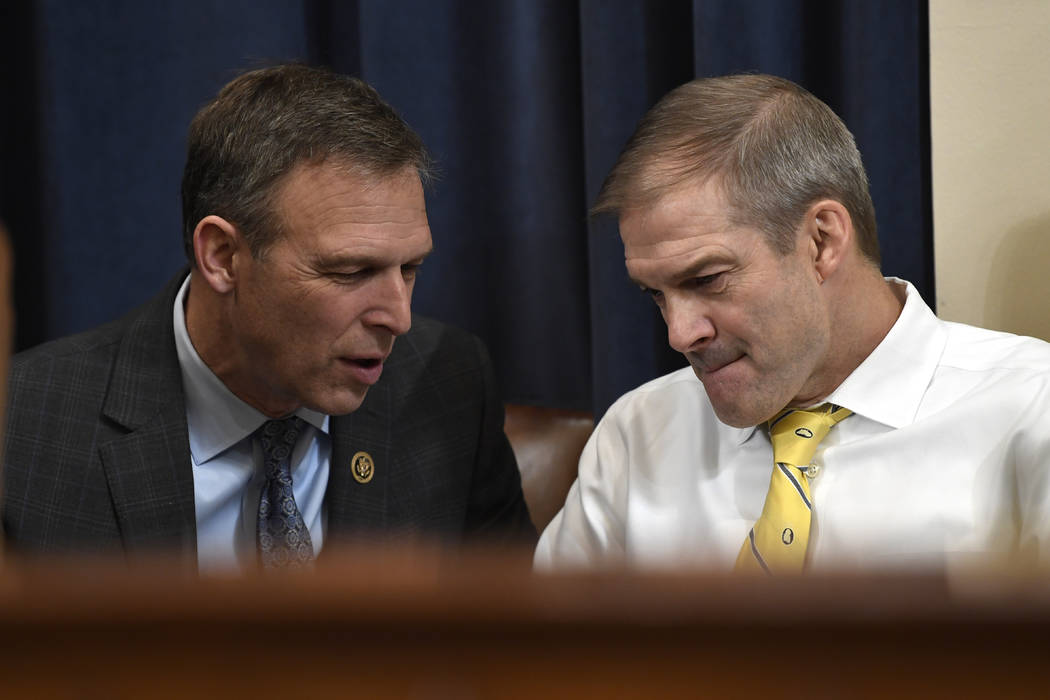 Rep. Scott Perry, R-Pa., talks with Rep. Jim Jordan, R-Ohio, during a break in testimony from former U.S. Ambassador to Ukraine Marie Yovanovitch at the House Intelligence Committee on Capitol Hill in Washington, Friday, Nov. 15, 2019, during the second public impeachment hearing of President Donald Trump's efforts to tie U.S. aid for Ukraine to investigations of his political opponents. (Susan Walsh/AP)

WASHINGTON — A former U.S. ambassador to Ukraine told a House panel Friday that she was the victim of a smear campaign and was shocked when abruptly told get “on the next plane” back to the United States because she was being removed from her post by President Donald Trump.

Marie Yovanovitch testified during the second day of the impeachment hearings that she was concerned when Trump mentioned her by name in a July 25 call with Ukrainian President Volodymyr Zelenskiy with comments that “sounded like a threat.”

Trump told Zelenskiy that Yovanovitch was “bad news,” and that she was going to “go through some things.”

“Even now, words kind of fail me,” Yovanovitch told the committee.

The drama of her testimony was heightened as Trump began commenting on Twitter during her appearance before the House panel and criticizing her three decades of work as a foreign service officer.

….They call it “serving at the pleasure of the President.” The U.S. now has a very strong and powerful foreign policy, much different than proceeding administrations. It is called, quite simply, America First! With all of that, however, I have done FAR more for Ukraine than O.

“She started off in Somalia, how did that go? Then fast forward to Ukraine, where the new Ukrainian President spoke unfavorably about her in my second phone call with him,” he said, despite a White House released transcript of the call that identifies Trump speaking critically of Yovanovitch, not the Ukrainian president.

Intelligence Committee Chairman Adam Schiff, D-Calif., told the hearing about the president’s live criticism on Twitter and offered Yovanovitch an opportunity to respond.

“I don’t think I have such powers,” she said of Trump’s claim that she was responsible for failures in the countries he named.

“Where I’ve served over the years, I and others have demonstrably made things better,” Yovanovitch said.

When Schiff asked her how the president’s comments could affect other witnesses called to testify in the impeachment hearings, she didn’t hesitate to speak.

During a break in the testimony, Schiff spoke to reporters in the hallway. He called the president’s comments during the hearing “witness intimidation in real time by the president of the United States.”

Asked by reporters later at the White House, Trump said his comments during the testimony were not intimidating and called the impeachment hearings a “disgrace.”

At the conclusion of her daylong testimony, audience members in the hearing room stood and applauded as Yovanovitch was escorted from the room.

Republicans on the committee defended the president’s removal of Yovanovitch from her post in the Ukraine as a legitimate exercise of presidential authority.

They attacked Schiff and the Democrats and called the hearings a politically motivated attempt to overturn the 2016 presidential election.

“It’s unfortunate that today and most of next week we will continue engaging in the Democrats’ daylong TV spectacles, instead of solving the problems we were all sent to Washington to address,” said Rep. Devin Nunes, R-Calif., the ranking GOP member of the committee.

Nunes suggested the removal of Yovanovitch was more a human resources issue than the subject of an impeachment hearing that could lead to the removal of the president.

House Speaker Nancy Pelosi, D-Calif., launched the impeachment inquiry and called for hearings after a whistleblower lodged complaints that the president asked Zelenskiy in the July 25 call to investigate political rival Joe Biden while the administration withheld nearly $400 million in military aid.

Trump has vehemently denied any wrongdoing and characterized the call with Zelenskiy as “perfect.”

“What the president has admitted to and says it’s perfect, I’ve said it’s perfectly wrong. It’s bribery,” Pelosi said during her weekly news conference this week.

During the hearing Friday, Rep. Elise Stefanik, R-N.Y., led a chorus of GOP complaints about Schiff for not making the whistleblower testify, despite his statements to the contrary and headlines from newspapers saying the unidentified complainant would appear before the panel.

Headlines citing Trump’s identification of the whistleblower as a spy and hinting at the death penalty (“what we used to do in the old days”) and other threats were placed into the hearing record by Rep. Eric Swalwell, D-Calif.

Republicans have focused on Hunter Biden, the former vice president’s son, who served on the board of directors of Ukrainian gas company Burisma, where he received a reported $50,000 per month.

GOP members of the committee to have requested Hunter Biden testify, a request Schiff has so far ruled out as immaterial to the inquiry to determine whether Trump abused his office with his request for a foreign government’s involvement in the upcoming 2020 election.

Acting ambassador to Ukraine, Bill Taylor, and Foreign Service officer George Kent testified earlier this week that Trump’s personal lawyer, Rudy Giuliani, headed an unofficial effort in Ukraine to press the foreign government to launch an investigation into the Bidens.

They testified that Giuliani and Yuri Lutsenko, a former Ukrainian prosecutor general, led a smear campaign to oust Yovanovitch, who was directing anti-corruption policies advocated by the State Department.

Yovanovitch told the committee that Lutsenko spread a fabrication that she had a “Do Not Prosecute” list and stood in the way of an investigation of the Bidens that Giuliani was seeking for Trump.

She also dispelled rumors that she told U.S. embassy employees and Ukrainian officials that Trump’s orders should be ignored.

Removed from her job

After being asked to extend her tour until 2020, she said the smear campaign entered a public phase in the United States, with conservative commentators on television and the president’s son, Donald Trump Jr., tweeting criticism of her and labeling her an Obama administration holdover who was disloyal to Trump.

A career Foreign Service officer with 33 years of service, Yovanovitch said she was removed from the post because the president had lost confidence in her.

She said she was abruptly told in April “to come back to Washington from Ukraine ‘on the next plane.’”

Under questioning from Republicans on the committee, Yovanovitch said she has always understood that she serves at the pleasure of the president and had no knowledge of any criminal activity or wrongdoing by Trump.

But she complained to higher ups about her removal because it was without cause and was “so political.”

Following the public hearing, a State Department officer, David Holmes, testified before the committee behind closed doors about a cell phone conversation he heard between Trump and Gordon Sondland, the ambassador to the European Union.

Taylor told the committee on Wednesday that he learned that Holmes had overheard Trump and Sondland talk about pursuing investigations in Ukraine. That call took place a day after the president spoke with Zelenskiy.

Sondland, a Trump appointee, is expected to testify before the committee next week.