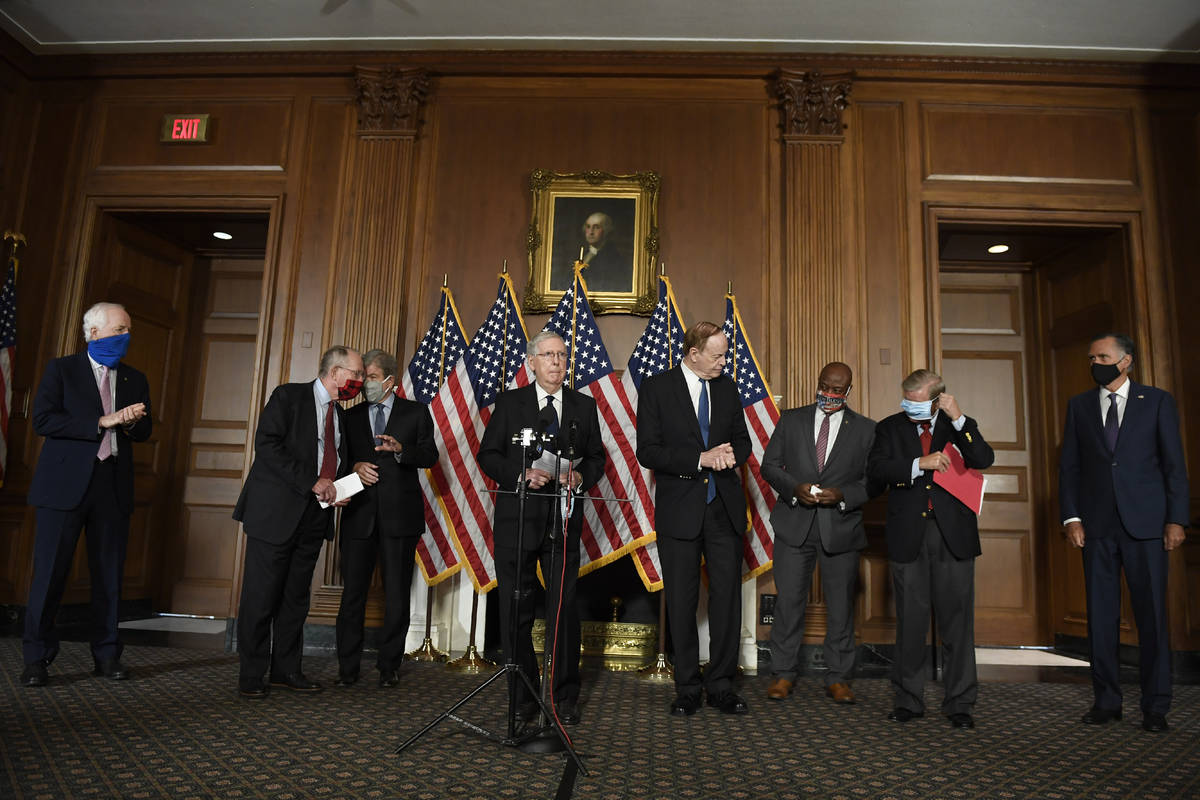 WASHINGTON — A $1 trillion GOP coronavirus relief package drew fire from all quarters Tuesday as the leaders of a divided Republican caucus entered into negotiations with Democrats and the White House.

“We have one foot in this pandemic and one foot in the recovery,” said Senate Majority Leader Mitch McConnell, R-Ky., who claimed the GOP proposal “a smart, safe and stable middle ground.”

But even McConnell would not defend a $1.75 billion request to refurbish the J. Edgar Hoover FBI headquarters building, which sits across the street from the luxury hotel owned by President Donald Trump. That item drew opposition from other Republican senators.

But the biggest stumbling block for the Republican plan is a proposed cut in unemployment benefits, that expires this week, and would slash a $600 per week payment to $200, on top of funds paid out by states.

House Speaker Nancy Pelosi, D-Calif., said the cut would hurt low-wage earners in states where joblessness is climbing. Those states include Nevada.

“Extending the increased unemployment benefits is vital for so many,” said Sen. Catherine Cortez Masto, D-Nev.

Pelosi called the GOP plan “a sad statement of their values, selling out struggling families at the kitchen table in order to enrich” corporate interests.

No aid for cities, states

The GOP plan also does not give states and cities federal assistance to meet budget shortfalls caused by the pandemic, while offering $120 billion to states in credits to open classrooms this fall.

The Republican plan drew a blistering response from the bipartisan U.S. Conference of Mayors and the National League of Cities, who accused Congress and the White House of ignoring the problem.

“Despite the fact that the coronavirus is showing no sign of slowing down, this legislative proposal turns its back on the very group of elected officials that are being asked to manage the crisis,” said Mayor Greg Fischer of Louisville, Kentucky and chairman of the mayors conference.

The mayors conference in a request last week included a report that showed Nevada cities with some of the highest rates of unemployment in the country. The report showed the state unemployment rate averaging 14 percent since the coronavirus forced closures in March.

Mayors from Reno, Henderson and Las Vegas have signed onto requests for $375 billion in financial assistance, which is included in the House bill.

The National Governors Association is also urging federal help to offset the costs of state-led efforts to battle the pandemic when a federal plan was not implemented. It sought $500 billion.

Nevada Gov. Steve Sisolak, a Democrat, ordered bars and taverns in Las Vegas and neighboring communities closed until at least next week as cases continue to spike.

Those closures come amid daily news of more layoffs from entertainment and hospitality companies, as well as restaurant and small business closures.

The state is eyeing a $1.2 billion shortfall this year.

“As governor, I will continue to aggressively advocate for additional flexible funds from the federal government that would help Nevada recover from this global pandemic,” Sisolak said.

Sisolak is expected to roll out long-term mitigation plans next week.

The GOP legislative proposal comes two and one-half months after the House Democrats passed a $3 trillion package that includes extended unemployment benefits, nearly $1 trillion for states and cities and hospitals to continue testing and training.

McConnell touted the GOP bill as a more focused approach, with $1 billion for small businesses, tax incentives to promote hiring and other highlights that include $1,200 stimulus checks for those making $75,000 a year or less, or $2,400 for couples making less than $150,000 per year.

The cut in unemployment benefits is favored by some in the GOP caucus, like Sen. Charles Grassley, R-Iowa, who said the $600 benefit allowed some people to make more money than their previous salaries and proved to be a disincentive to work.

That cut would last for just a couple of months, until states could implement a formula that would base federal unemployment benefits to 70 percent of a worker’s former salary, a complicated system decried by senators and states alike.

“We want to continue to help the unemployed, but we want people to work,” Grassley told reporters.

Even then, some conservatives in the caucus balked at the $1 trillion price tag of the entire bill. Sen. Ted Cruz, R-Texas, singled out the cost of unemployment benefits.

The GOP plan also contains lawsuit protections for businesses, schools, churches and other institutions that opened for business

The Republican Senate plan gives states $16 billion to divvy up for testing, and no funds for nutrition programs for low-income populations and rent assistance included in the House plan.

No money is in the GOP plan to help the U.S. Postal Service, which is threatening layoffs due to effects of the coronavirus. The House bill includes $25 billion.

“The U.S. Postal Service is a crucial lifeline for many Nevadans, including seniors and those who live in rural parts of the state,” Cortez Masto said.

In the midst of a pandemic, Cortez Masto said Congress should bolster the service “to make sure it’s able to get critical supplies to everyone who needs them.”

Cortez Masto and Sen. Jacky Rosen, D-Nev., have joined Democratic colleagues in urging McConnell to take up the House-passed bill.

Democratic senators, meanwhile, mocked the GOP plan for refurbishing the FBI building, located across the street from the hotel owned by Trump, whose administration has blocked a move of the bureau to the suburbs.

“What the heck is going on?” asked Senate Minority Leader Chuck Schumer, D-N.Y.

McConnell said he was against the appropriation for the FBI building renovation. He noted again that the GOP plan was a starting point for discussion.